His name is Bob Marvel, of Marvel Custom Pistols a.k.a. Bob Marvel Guns (BMG), and his custom-built combat / tactical pistols are supposed to be runners, i.e. go bang every time you pull the trigger.

Back when I conducted interviews for that article on the Nighthawk Custom Global Response Pistol a.k.a. Nighthawk GRP tactical 1911 pistol, Mark Hanish of the Scottdale Gun Club (SGC) had very high praise for… 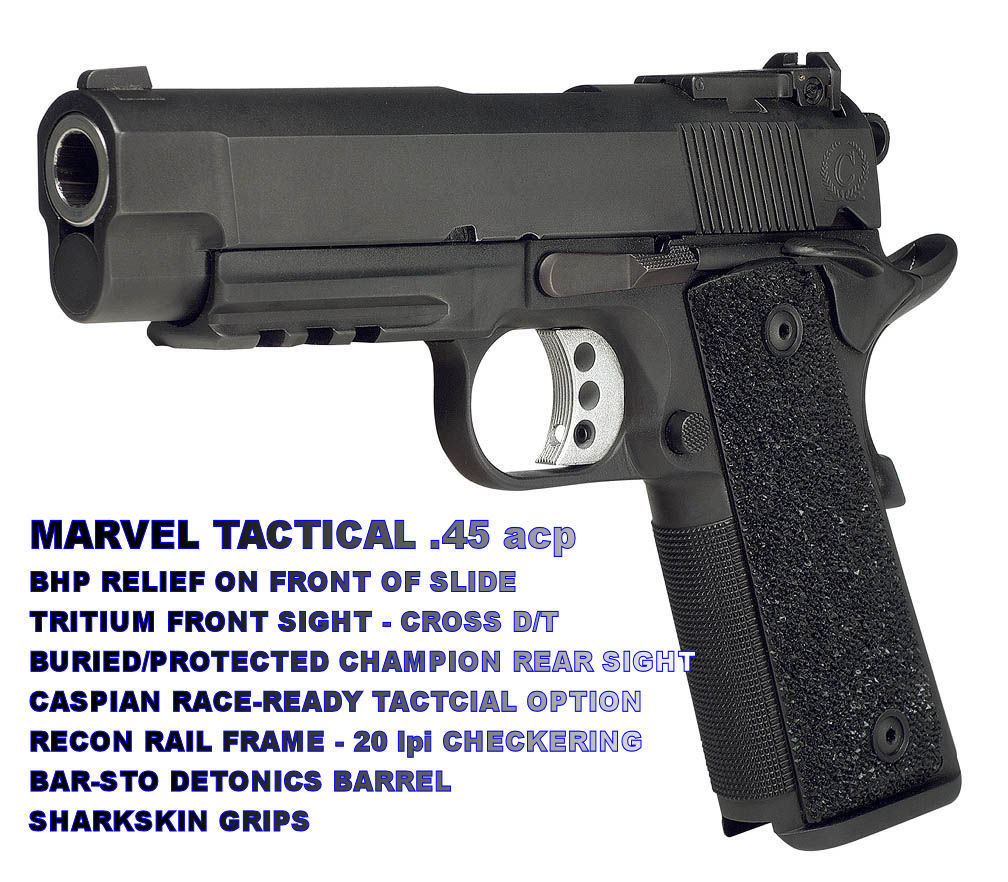 Since publishing that piece, Defense Review has been attempting to interview a particular U.S. Army Special Forces assaulter / operator who is currently carrying a Marvel Custom single-stack tactical 1911 .45 ACP pistol (pictured) operationally in the Sandbox, but the guy’s been busy. We’re still workin’ on it. In the meantime, we have some information and photos on an operational Spec-Ops single-stack 1911 and a high-capacity / double-stack 1911 pistol, both in .45 ACP. The photos and info came to DefRev in the form of email communications from Joe Chambers of Marvel Custom Pistols / Bob Marvel Guns.

Below are sanitized/edited versions of those email communications, presented in the order they were sent, from first to last (i.e. oldest to most recent). However, before we get to those, we should mention that Marvel custom tactical 1911 pistols are available from both Marvel Custom Pistols directly, and/or from The Scottsdale Gun Club Pro Shop / Retail Showroom.

Here are the two communications we received from Mr. Chambers: 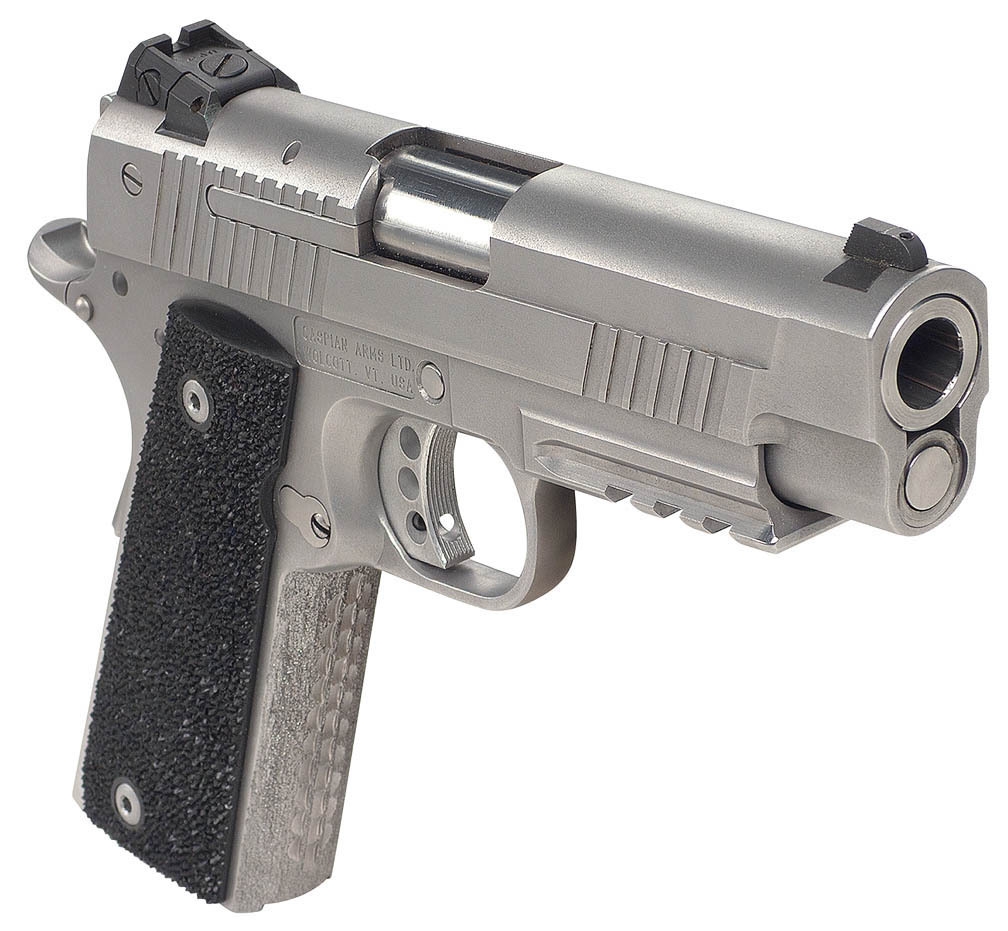 After talking to Bob this morning he has come up with the following
list of details that may be of interest to your readers.

The black pistol that I sent you is currently in use overseas in “the
sand”. It is on its 3rd or 4th tour, we can not be sure on exactly
how many times. When it returns to the USA after this tour it will be
stripped of its current matte blue finish and coated with (Ion Bond (www.ionbond.com).

The guns we build to go overseas for these types of operators go thru
a 2000 round test fire torture test with various types of ammo in a
myriad of conditions. This gun had zero malfunctions during testing
and has had none reported by its current user to us which is something
we request they do for our knowledge.

The accuracy on this gun was, believe it or not, sub 1.5 inch 10 shot
groups at 50 YARDS out of a ransom rest with match ammo. There were
three such groups provided to the user when the gun was sent to him,
all witnessed by more than one person.

The gun has a government length caspian slide that we cut down by .75″
with our “bull nose” front end. It also has our browning high power
cut on the front sides of the slide. It contains a 4.25″ Match Grade
Barsto Detonics cut barrel that is cut flush with the end of the slide.

The sights on the gun are Tritium front sight and Champion Adjustable
Combat Ear rear sight that we install buried and protected. The grips
are Champion Shark Skin grips.

Guess that about covers it from our end. If you need any other info
just let us know. Bob was curious if you were able to get in touch
with XXXX? 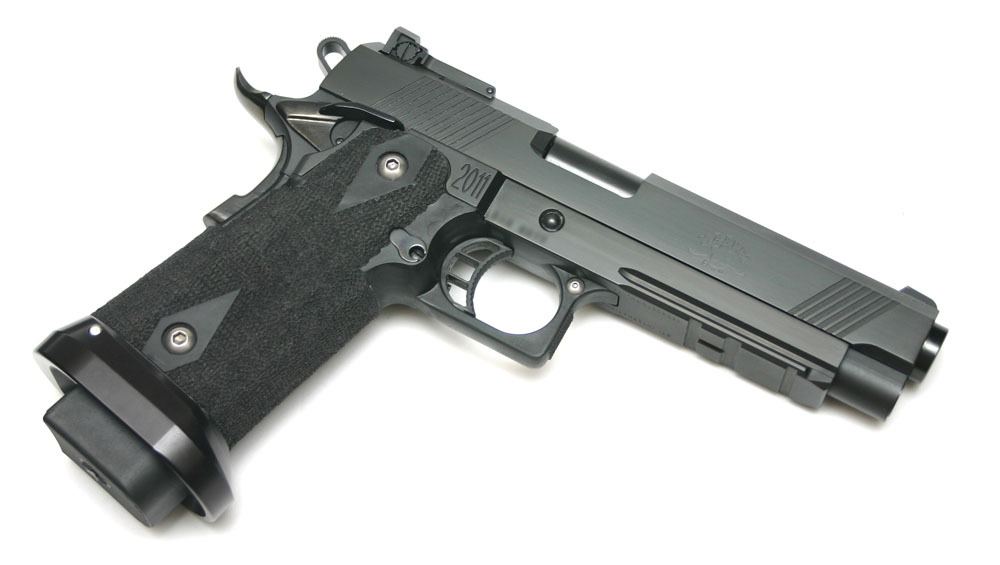 The “bull nose” is in reference to the shape of the nose, not the
weight. These guns are lighter because they are cut shorter in the
slide. The bottom of the nose is sloped off, thus the term “bull
nose” so as to aid in clearing a holster.

The reverse recoil plug used in conjunction with the bull barrel helps
to make take down and maintaining the pistol in the field easy as no
tools are needed to remove a bushing.

We use MetalForm that we modify to our specs to make the work for the most part in the
single stacks. Right now xxxx is using Wilson mags but we do not
recommend putting 8 rounds in any of them as they are not reliable.
They are, contrary to popular belief, only reliable with 7 rounds if
you care about your life. 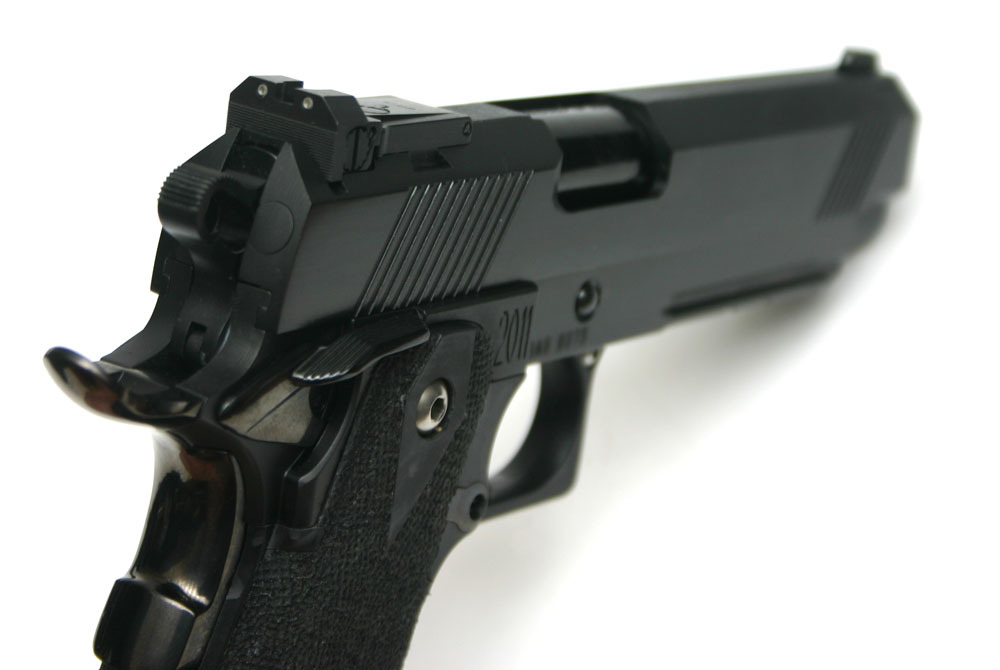 For the double stack sti’s we use sti mags that we have to heavily
alter and tune because they are always way out of spec. Also they
have to be modified along with the gun slide stop so that the slide
does not lock back because if not the STIs and their clones have a
habit of locking back on the second to last round which is a major
liability.

For military guns single stack is in Bob’s opinion the best option.
Some of the reasons are mentioned above. Others are you don’t need
the additional weight and bulk of the double stack .45 hanging out
there. Notice I say .45 as that is what we are talking about here.
Also remember we are talking about a secondary weapon here. This is
not inteded to be the primary mode of assault. 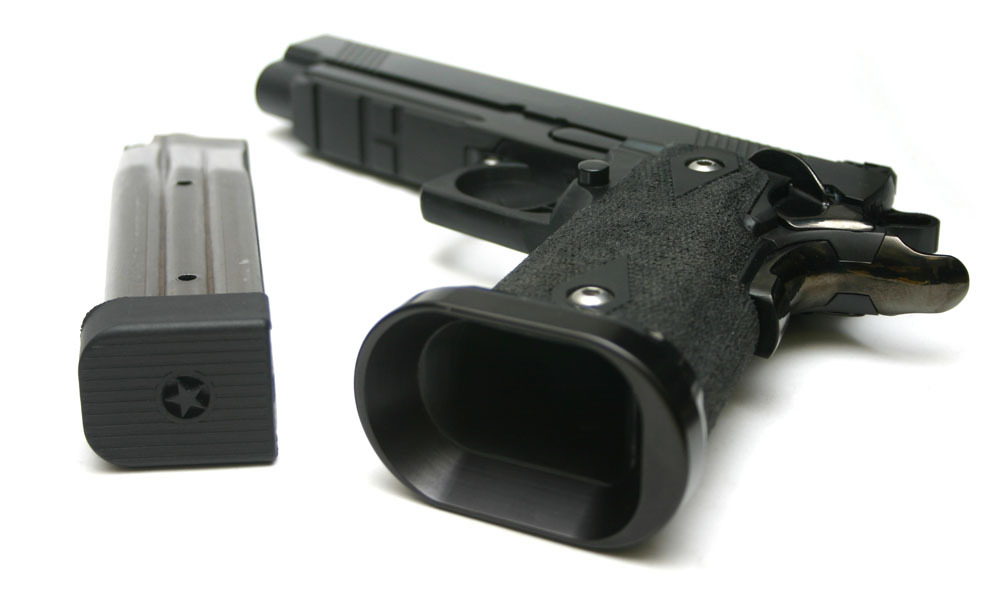 The STI’s that we build for SGC come in .45, .40, 9mm and .38s.
However, again, they have all been modified so that the slide does NOT
lock back due to liability issues because the mags are not right.

All of the guns we build are reliable and durable. We just simply
suggest for operational use in the field with a .45 that the gun be a
single stack. It is the prefered choice since the year 1911.

Finally, the reports we have been getting back are that simply put,
the 9mm is not killing people. The .45…is. So, if you were in the
field what would you want a 9mm with lots of rounds that doesn’t do
the job, or a .45 with fewer rounds that will?

Let me know if you have any more questions.

David Crane started publishing online in 2001. Since that time, governments, military organizations, Special Operators (i.e. professional trigger pullers), agencies, and civilian tactical shooters the world over have come to depend on Defense Review as the authoritative source of news and information on "the latest and greatest" in the field of military defense and tactical technology and hardware, including tactical firearms, ammunition, equipment, gear, and training.
Previous High-Capacity ‘Tactical Plastic’ .45 ACP Pistols: Choices, Choices…
Next Zero Tolerance Knives Assisted-Opening Tactical Folders: Hard-Use Carry Blades