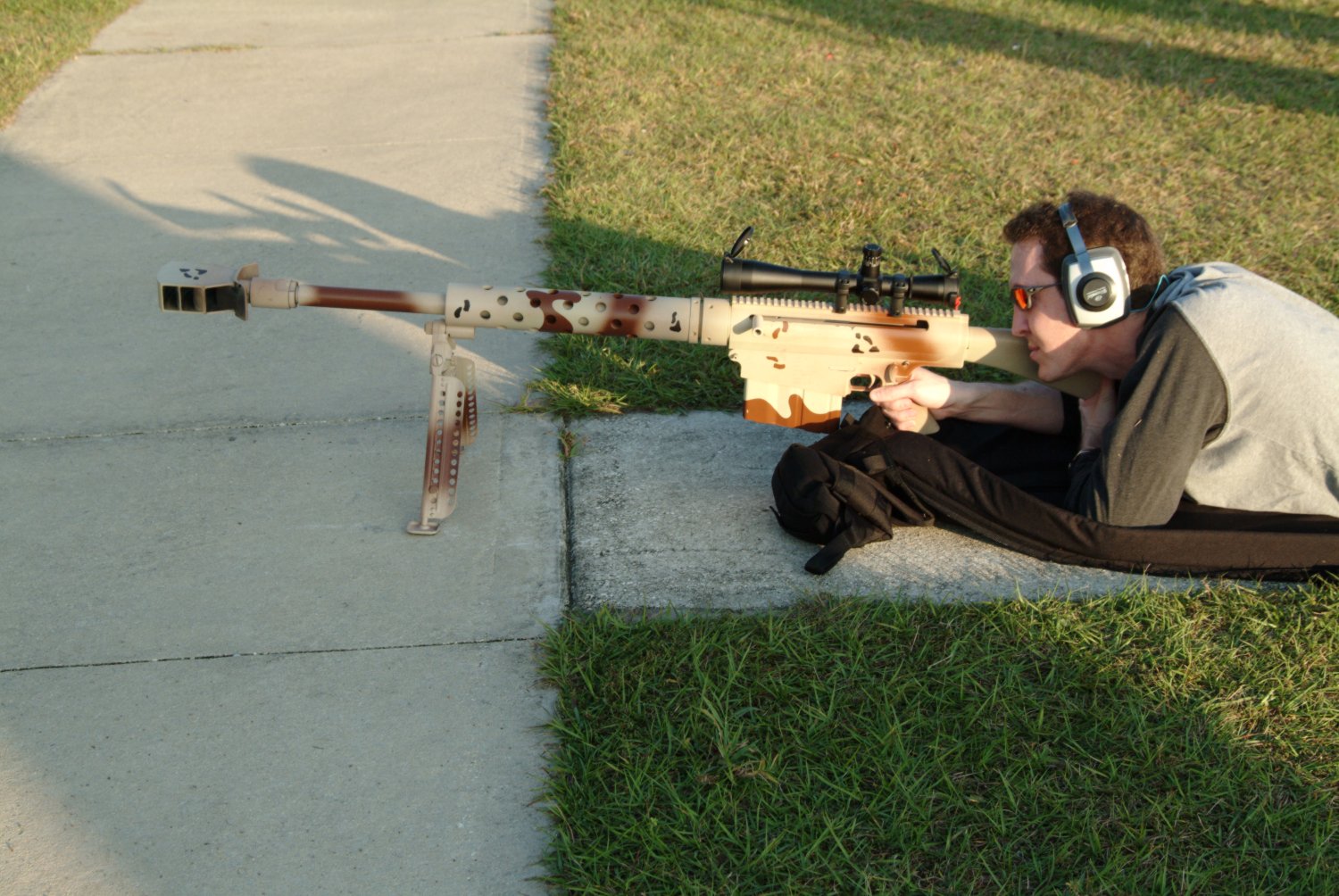 The Cobb FA50 is basically a scaled up M16/AR15-type operating bolt/carrier system in a straight pull back bolt action. Simply pull the left sided charging handle straight back and let it go the main spring will push the bolt/carrier forward chambering a round from a 10 round box magazine, fire it and pull the charging handle back, it ejects the spent case and let it go, at which time the main spring will push the bolt/carrier forward chambering a new round from the magazine. It is much quicker then conventional bolt where you go up/back/forward and down to cycle a round. I thought the old Swiss-K type design is what an accurate shooting .50 BMG needed. You get the accuracy of a bolt action rifle with 1-MOA accuracy but faster shot times then a conventional bolt action rifle.

For military use it makes perfect sense because a lot of the parts are interchangeable with what’s already in the military’s inventory and supply chain for the M16/M4 and M60 machine gun. The bipod is not Cobb specific, its an off the shelf M60 machine gun bipod which the military has thousands of in their inventory. In a pinch for example if a 4 man team behind enemy lines had a Cobb FA50, two M4/M16 rifles and one M14 and they lost a small part out of the .50 cal due to high wind during cleaning or what ever the reason say it even broke as worst case may be, they could easily go to one the M16’s and replace the part on the .50 cal trigger group and put their main rifle back in service. Our rifle is cheaper then a semi-auto being sold now, there is no training cost because every GI is already familiar with the M16 rifle, less time to train depot level experts because its a know design to all branches of the military and most foreign military units. 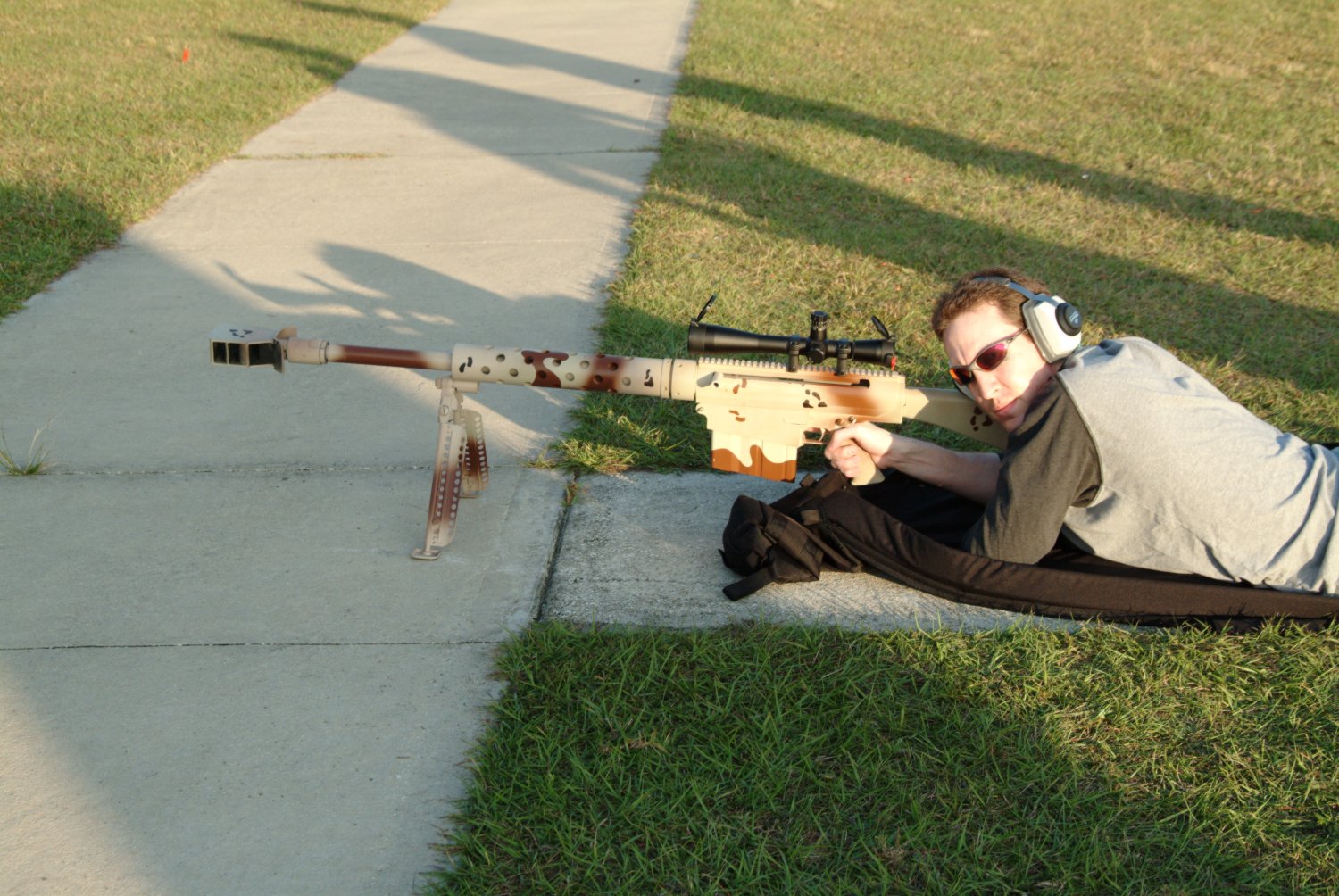 All the lower receiver parts interchange with M16/AR15 except for the hammer and hammer spring. The entire field strip of the rifle is done like an AR15, you take out the two take down pins separating upper and lower. Take out the bolt and carrier from the upper, then pull the cotter pin out to take out the firing pin, and hence the cam pin will come out, and finally the bolt comes out of bolt carrier. There is no gas key but there is a metal key there for orientation which does not need to come off for cleaning. The bolt is just like and M16/AR15 bolt except a lot bigger. The bolt carrier is similar in looks but we have made some slots in the carrier to prevent from dirt and sand from clogging it up. The butt stock and pistol grip are standard M16/AR15. The photos on the web site are of the prototype.

The changes we have made in current production rifles that are being manufactured as we speak for civilian and military customers from the prototype on the web site:

M1913 picatanny rail is standard for the entire length of the upper.
Optional full length rail is available which attaches to the existing rail on the upper and stretches out to the end of the hand guard towards the muzzle, this is mainly for our military customers who have lots of high tech attachments for night vision/IR etc.
A brass deflector has been added as part of the upper.

Future upgrades will be a dust cover similar to an M16/AR15 design.

DefRev has not had a chance to handle or test fire the the Cobb FA50(T) Fast Action .50 BMG sniper/anti-materiel rifle yet, but we look forward to running the Cobb FA50(T) sometime in the not-too-distant future. According to the company, both the U.S. military and foreign governments have already expressed interest in the rifle, and have ordered units for testing. We’ll keep you posted.

David Crane started publishing online in 2001. Since that time, governments, military organizations, Special Operators (i.e. professional trigger pullers), agencies, and civilian tactical shooters the world over have come to depend on Defense Review as the authoritative source of news and information on "the latest and greatest" in the field of military defense and tactical technology and hardware, including tactical firearms, ammunition, equipment, gear, and training.
Previous Kimber Introduces Intregral Light/Laser
Next Walker’s Game Ear Power Muffs **Quad** Active Electronic Hearing Protection