DefenseReview reported on the multi-shot (6-shot) Milkor USA M32 MGL (Multiple-shot Grenade Launcher) and it’s developmental precursor, the MGL-140, a good while back. In fact, Defense Review was the first defense publication to report on the MGL-140 and show photos of the new weapon while it was on display at International SOF Week APBI 2005 in Tampa, FL. However, seeing and handling is one thing, while firing is something completely different.

Well, DefenseReview got the chance to do just that at NDIA Small Arms Symposium, Exhibition and Firing Demo 2007 during the firing demo portion at Blackwater USA. You can see the author firing the M-32 MGL in the accompanying photos. Before we shot the… 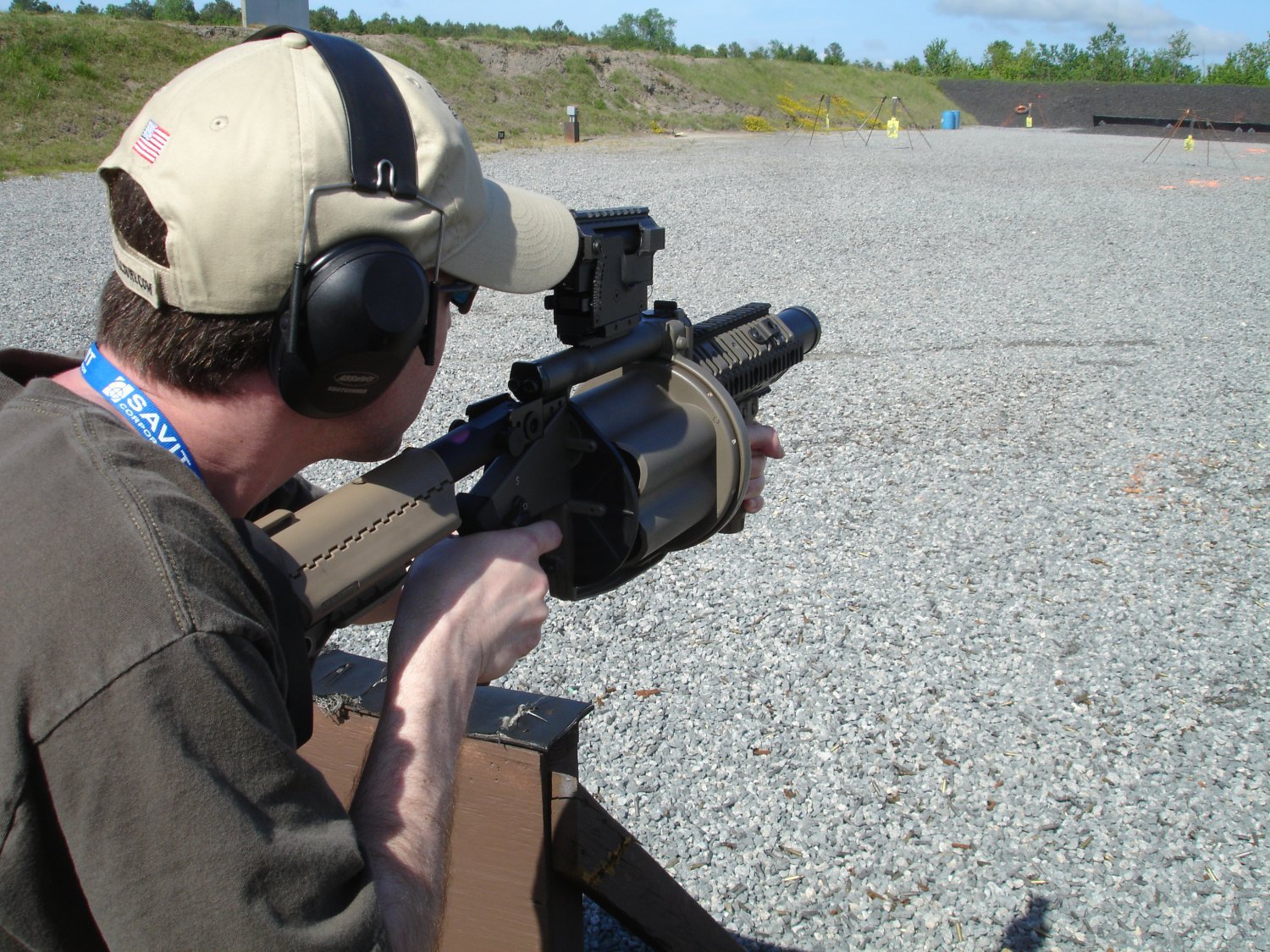 M32, we observed several attendees firing both the M32 and MGL-105 (standard/short-cylinder version), and putting practice/training 40mm grenade rounds exactly where they were told to aim at various distances out to approx. 75-100 yards with both weapons.

Our experience was no different. Using the M-32 MGL’s tube-type reflex sight, I was able to place all of my 40mm practice/training grenades exactly where I was aiming, out to the aforementioned distance window (75-100 yards). While we didn’t get an oportunity to test the M32 under adverse conditions and high round count out to distances between 400 and 800 meters, the Marines already have. Based on their experience with the weapon during testing, they decided to issue a procurement contract to Milkor USA, Inc.

DefenseReview doesn’t know how many M-32s the U.S. Marine Corps has acquired/procured to date, but we know it’s in the thousands. As of March 13, 2006, the number stood at somewhere around 9,000 units (launchers). It’ really no surprise that the M32 MGL is reliable, considering it’s really just a modified MGL-140, which is a modified Milkor MGL Mk-1L multiple grenade launcher, which is the long-cylinder version of the Milkor MGL Mk-1S. The Milkor Mk-1/Mk-1S revolver-type multiple grenade launcher (MGL) is perhaps the most ubiquitous and battle-proven 40mm MGL in the world, having proven itself in hotspots around the world, particularly in Africa. 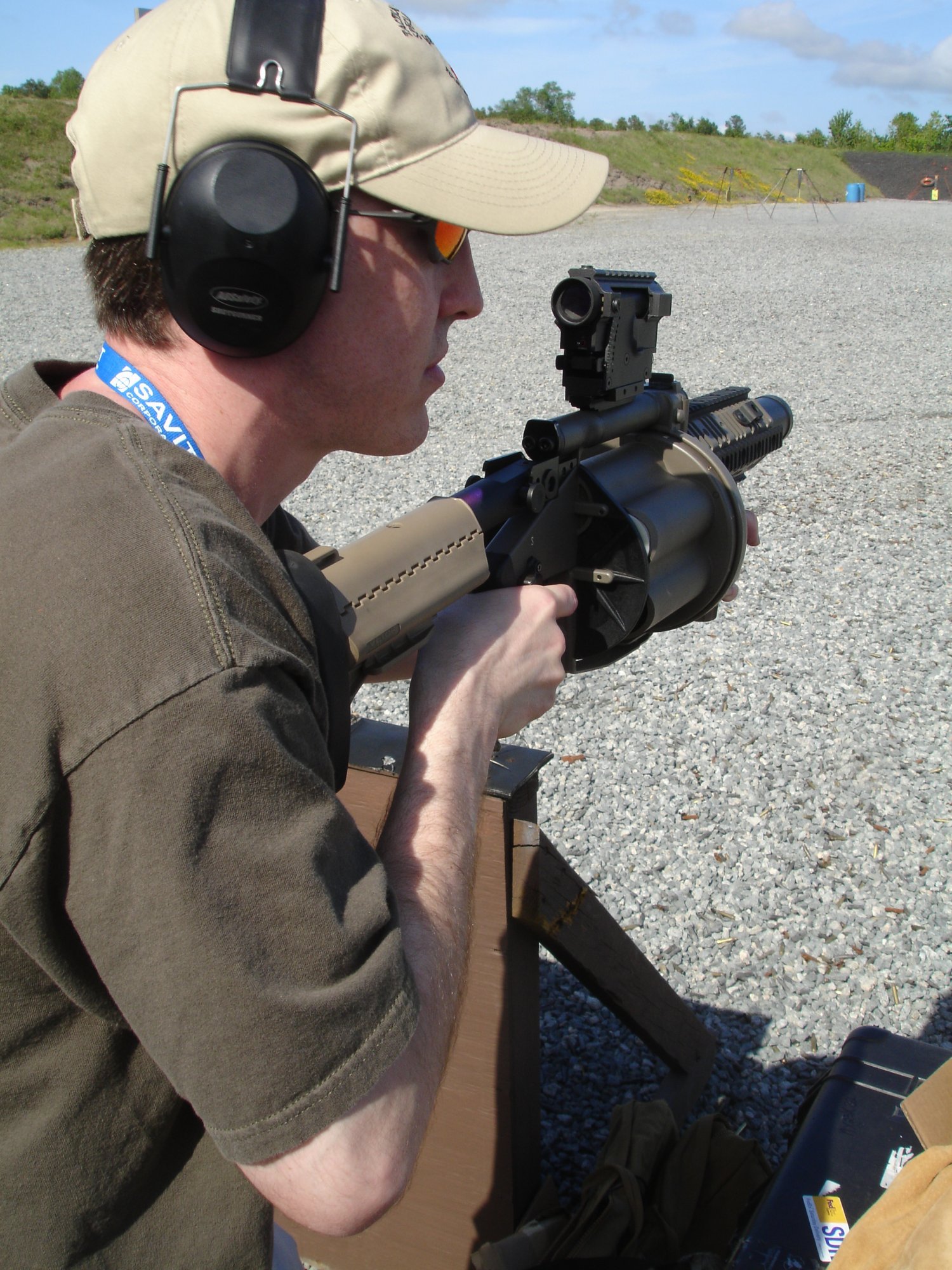 The Milkor USA M32 MGL is designed to be able to fire medium-range low-impulse 40mm ammunition out to a distance of approx. 800 meters. Martin Electronics, Inc. (MEI) makes a particularly deadly medium-range round called the MERCURY round. The medium-range MEI MERCURY 40mm grenade round is basically the longer-range version of the MEI HELLHOUND 40mm grenade round. Getting the extra range out of the round (going from the HELLHOUND’s approx. 400 meters to the MERCURY’s approx. 800 meters) necessitates removing some fragmentation/killing effect from the round, since some of the fragmenting rings and explosive charge must be removed from the round. You can see the external evidence of this (less fragmentation rings) in the accompanying photo(s) of the MEI 40mm ammo.

Don’t worry, though, MERCURY is still plenty deadly. We promise.

Anyway, DefenseReview was impressed with the M-32 MGL at the NDIA test shoot at Blackwater, and we look forward to getting some reports back from the field on its performance in the Sandbox (Iraq and Stan a.k.a. Afghanstan). 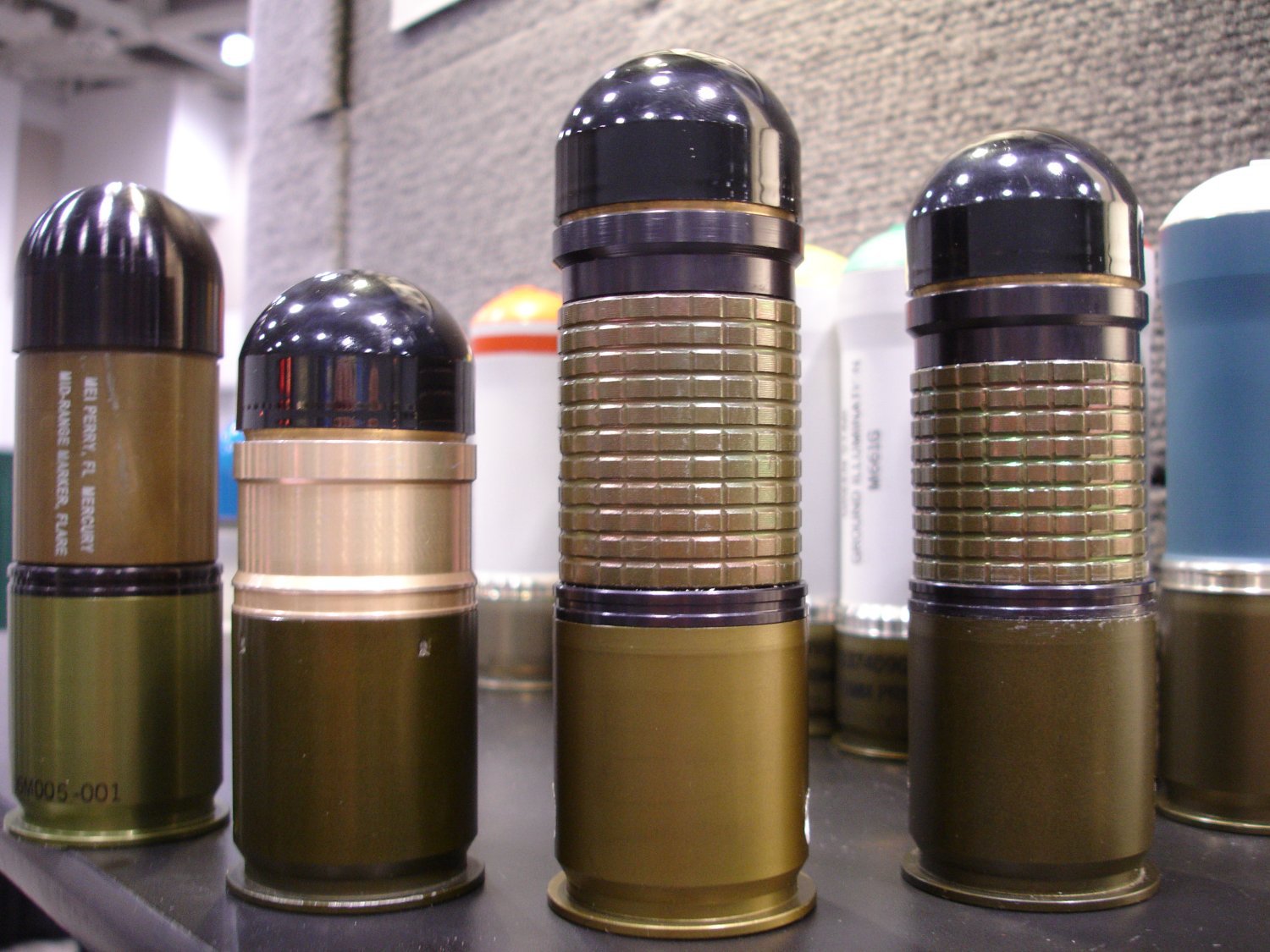 By the way, we also got to view and handle the Milkor USA MGL-105 (basically a short-cylinder M32) at NDIA, but due to time constraints, we only got to test-fire the M32. We had to make a choice, so we chose the M-32 and didn’t look back.

It’s important to note that Milkor USA, Inc. is a U.S. company (U.S. located, owned and operated), and is a totally separate company from all companies outside the United States that retain the name "Milkor", including the Milkor located in South Africa.

David Crane started publishing online in 2001. Since that time, governments, military organizations, Special Operators (i.e. professional trigger pullers), agencies, and civilian tactical shooters the world over have come to depend on Defense Review as the authoritative source of news and information on "the latest and greatest" in the field of military defense and tactical technology and hardware, including tactical firearms, ammunition, equipment, gear, and training.
Previous ‘Intelligent’ Video Surveillance/Security Going City-Wide in Chicago
Next KAC 6x35mm PDW (Personal Defense Weapon) Gets Test-Fired at the Range