Like the SHOT Show, the annual Modern Day Marine Military Expo gets bigger and better each year. However, unlike SHOT some of the toys for Uncle Sam’s boys that are on display cost millions of dollars a pop. Aircraft, particularly the unmanned variety, unmanned and manned waterborne patrol and attack platforms, wheeled and tracked robots, people and weapons movers and advanced war fighting technology mostly accounted for the big ticket items. Defense Review was there to ascertain and highlight what cutting edge items of security hardware would be applicable to police and military efforts in the Global War on Terrorism.
"The Patrol"
Sharing the Ontario Knife booth, maker of the wicked…

Marine Corp’s new bayonet and utility fighting knife was Sculptress Ms. Laurie Barton. An accomplished artist, she is currently engaged in creating a larger than life sized sculpture for the WWII US Marine Raider Association. This project is near and dear to my heart because the best battalion commander I ever had was former Raider, Lt. Colonel later Brigadier General Leonard Fryeburg USMC. He used to keep us in stitches when he told the story of how he was shot by a Japanese sniper while briefly resting in the jungle hammock his men had erected for him. As he as being patched up he wondered if their act was one of concern or they were trying to send him another message? He was an excellent leader and loved the men that served under him. And in turn we loved him. 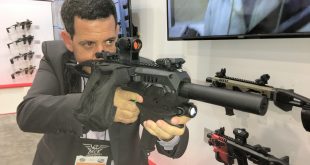