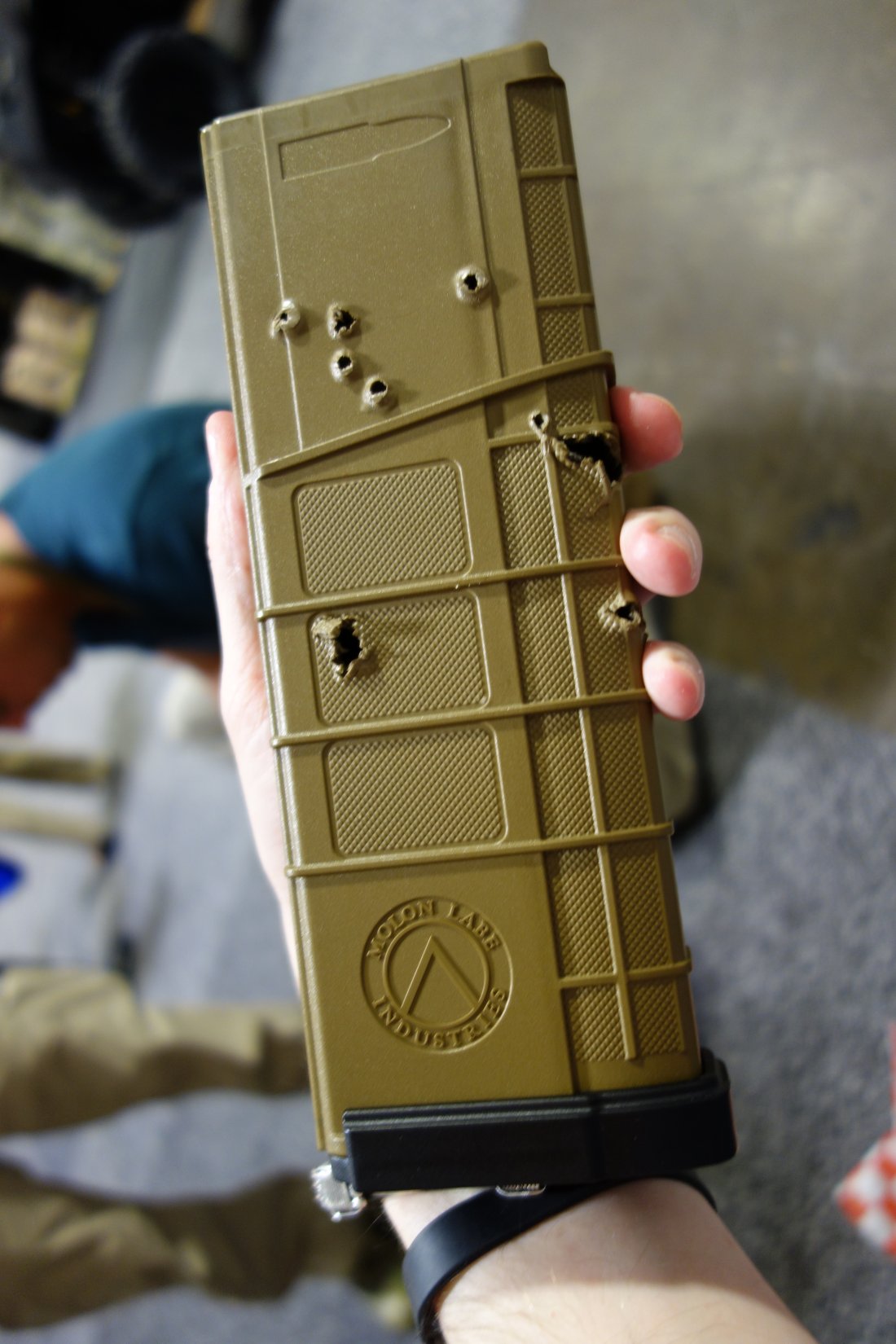 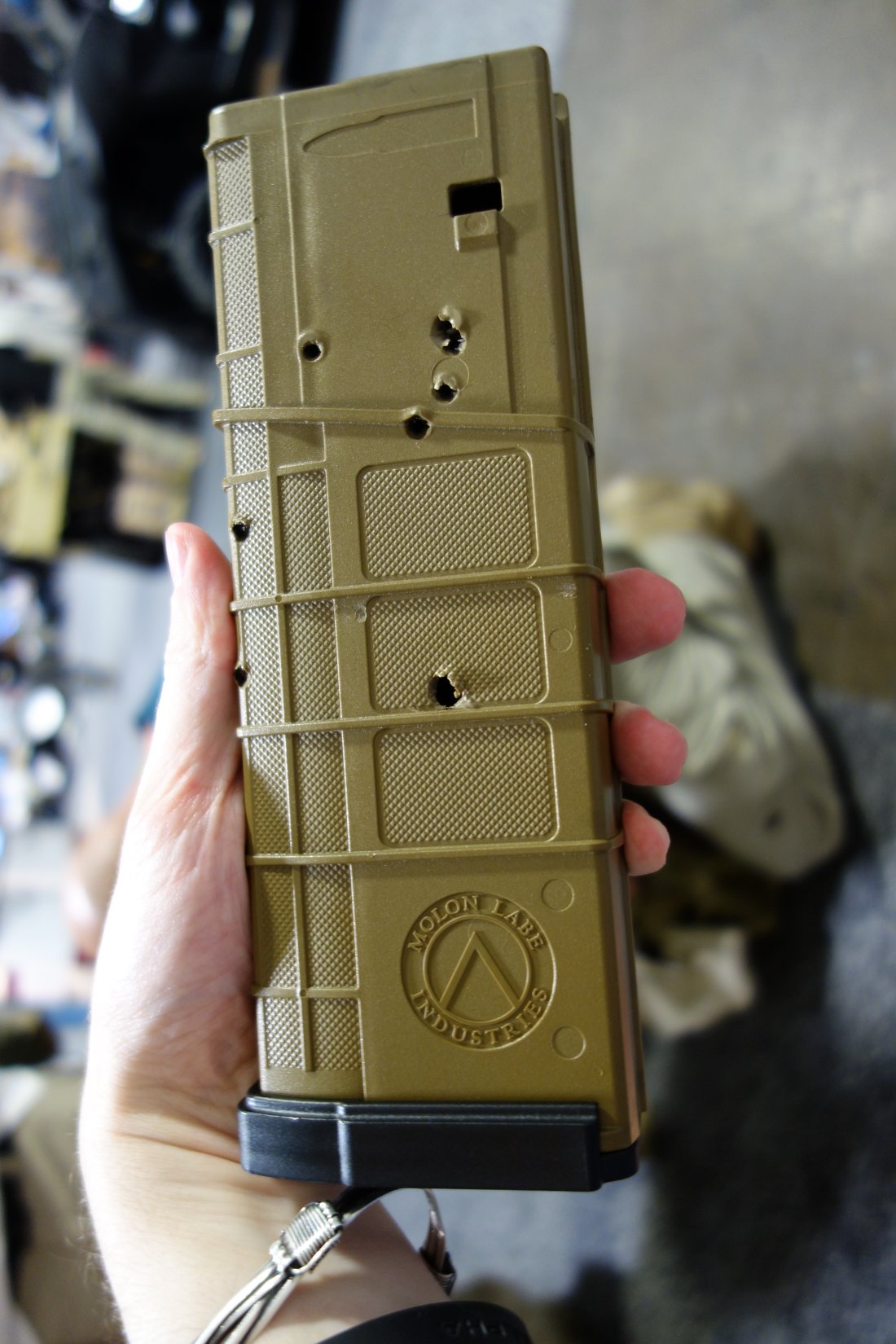 While we're on the subject of cool, new polymer rifle mags (magazines), we should probably mention that, thanks to our friend Will Falcon of S.T.A.T. International, we ran into the boys from Molon Labe Industries (MLI) at the 2013 NDIA Special Operations Forces Industry Conference (NDIA SOFIC 2013), and they showed us a MLI SCARmag 25-round 7.62mm NATO (7.62x51mm NATO)/.308 Win. super-polymer rifle mag (Dark Earth) designed for the FN MK-17 SCAR-H (Heavy) select-fire/fulla-auto and FN SCAR 17S semi-auto-only battle rifle series that they'd recently shot-tested (or "bullet impact tested") for reliability and durability.

According to MLI CEO Chris Gleason, the proprietary polymer used in the SCARmag is superior to anything else out there for magazines, durability-wise. Apparently, not only is this polymer "virtually indestructable", it apparently also has "IR (InfraRed) cloaking properties".

Here's what Mr. Gleason wrote about the MLI SCARmag and shot test in a subsequent email to DefenseReview (DR):

When we set out to create the SCARmag our goal was to address the shortcomings of the existing polymer magazines and metal magazines. One of the chief complaints that we heard was the fact that polymer magazines were prone to cracking and fragmenting. Our engineering and material selection addressed this well-known issue. As part of our testing process we decided that a bullet impact test would highlight the durability of our product and showcase the properties of the material used.

The testing conducted comprised of the SCARmag being subjected to multiple hits (8 in total) with 5.56mm & 7.62mm rounds at varying ranges. The test results clearly demonstrated the durability of the magazine and the anti-fragmentation properties of our product’s proprietary polymer. After the test we removed the damaged spring, cleaned up the inside of the magazine with a multi-tool, inserted a new spring, loaded the magazine with 25 rounds and we were able to still use the magazine with zero malfunctions.

Our proprietary polymer has some very unique properties one of which is the ability to withstand abuse that would cause catastrophic failure with our competitors’ products. We feel that our polymer is the future of polymer firearms accessories as it outperforms anything on the market today.

I guess you could say that the MLI SCARmag 7.62mm polymer rifle mag takes a bleeding and keeps on feeding (my line). Anyway, a SR-25-format version of the SCARmag is currently in the works, which Defense Review is a bit more excited about than the one for the SCAR rifles. The AR-type SR-25 magwell is essentially now the 7.76mm industry-standard equivalent of the 4179 STANAG standard for the 5.56mm, and there are a lot more SR-25-format ARs out there than SCARs, at least in civilian hands. Wait time for the SR-25-format version of the SCARmag is expected to be about four months at the outside.

The following information on the MLI SCARmag comes directly from a company press release:

"LARGO, FL (May 2013) – Molon Labe Industries, manufacturers of polymer magazines and accessories for the FN SCAR and AR rifle platforms, has begun shipment of its patent pending SCARmag to its pre-order customers.

“The SCARmag has undergone some great improvements since we initially announced the project in late 2012, making these new SCARmags even more reliable and indestructible than the original models,” Chris Gleason, Founder and CEO of Molon Labe Industries stated. “Our production is increasing every day to fulfill the many orders we have received over the past several months from our very excited customers.”

The SCARmag is designed to operate in the SCAR 17, SCAR 17s, SCAR H and MK17 rifle systems and is compatible with 7.62 mm / .308 Win. At half the weight of a factory FN SCAR magazine, the SCARmag will prove to be a great advancement in the world of FN SCAR magazines. The SCARmag has a zero-tilt, low-friction, self-lubricating follower system, so unlike the factory FN Herstal SCAR 17 magazine, it does not bind. The magazine spring is made from the highest quality stainless steel spring stock.

The SCARmag is made of proprietary polymer that is virtually indestructible, exceeding Mil-Spec extreme temperatures parameters. Another unique feature of the SCARmag is the Stealth-Tex IR Signature Reduction Technology. The SCARmag also has enhanced grip protection. 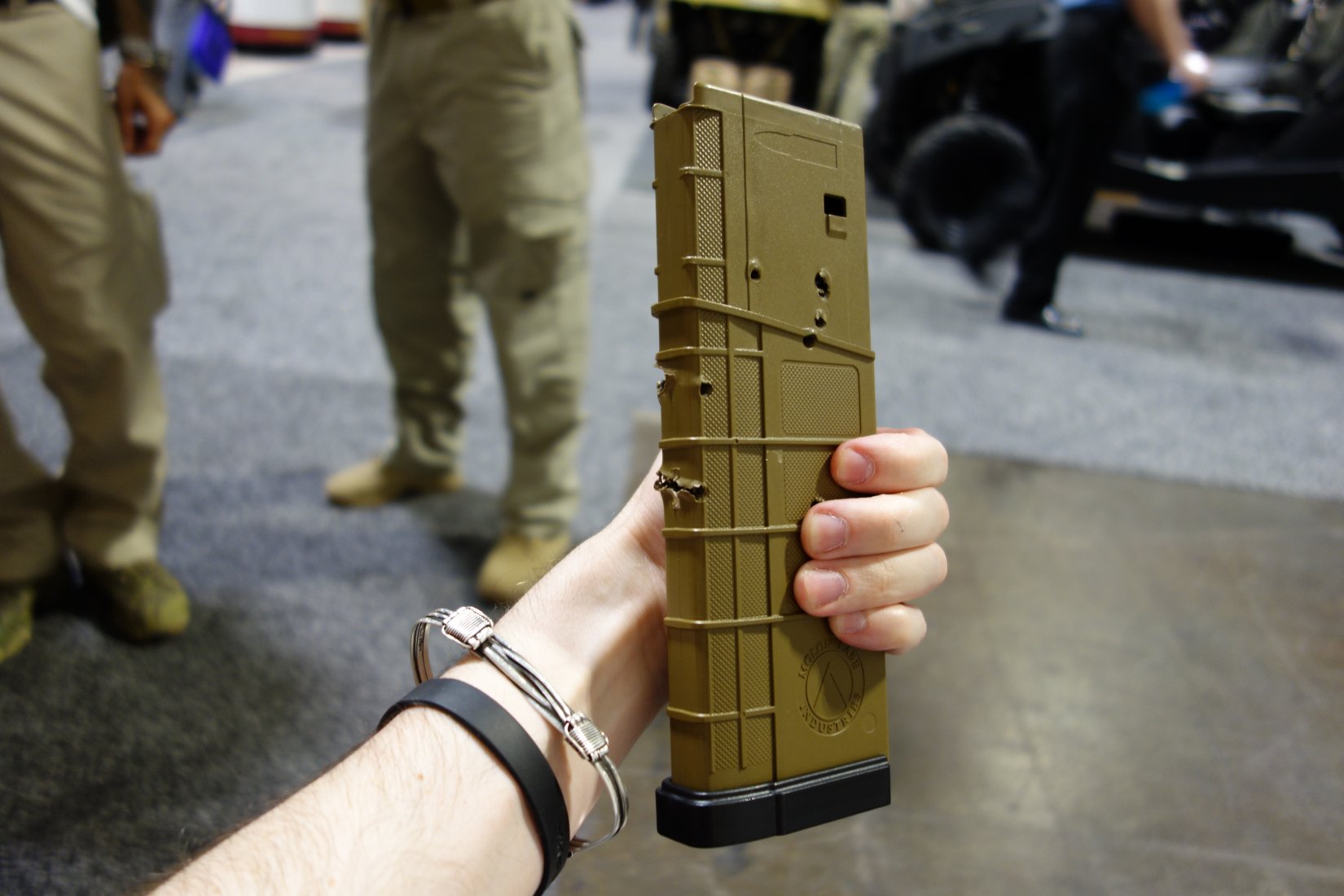 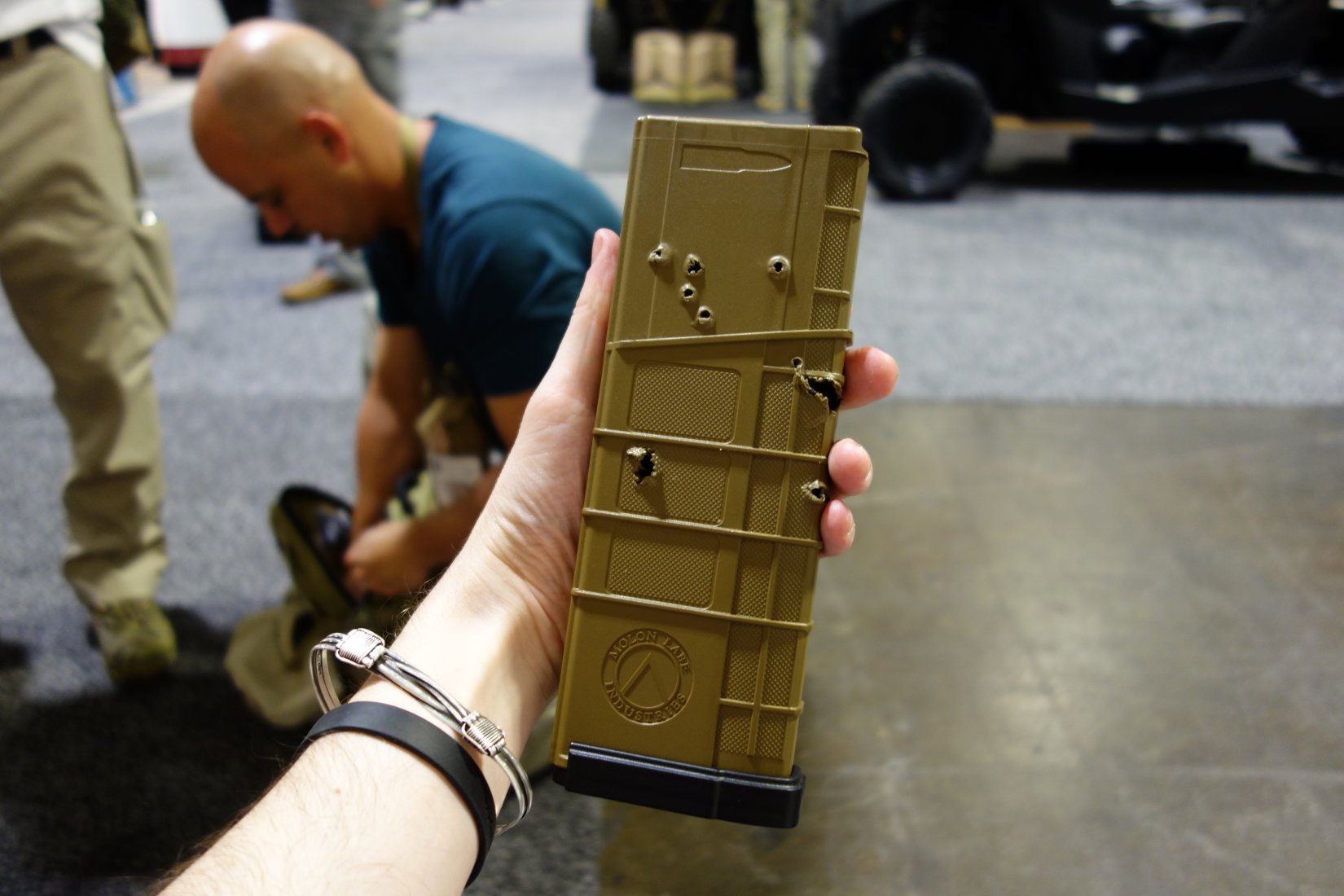 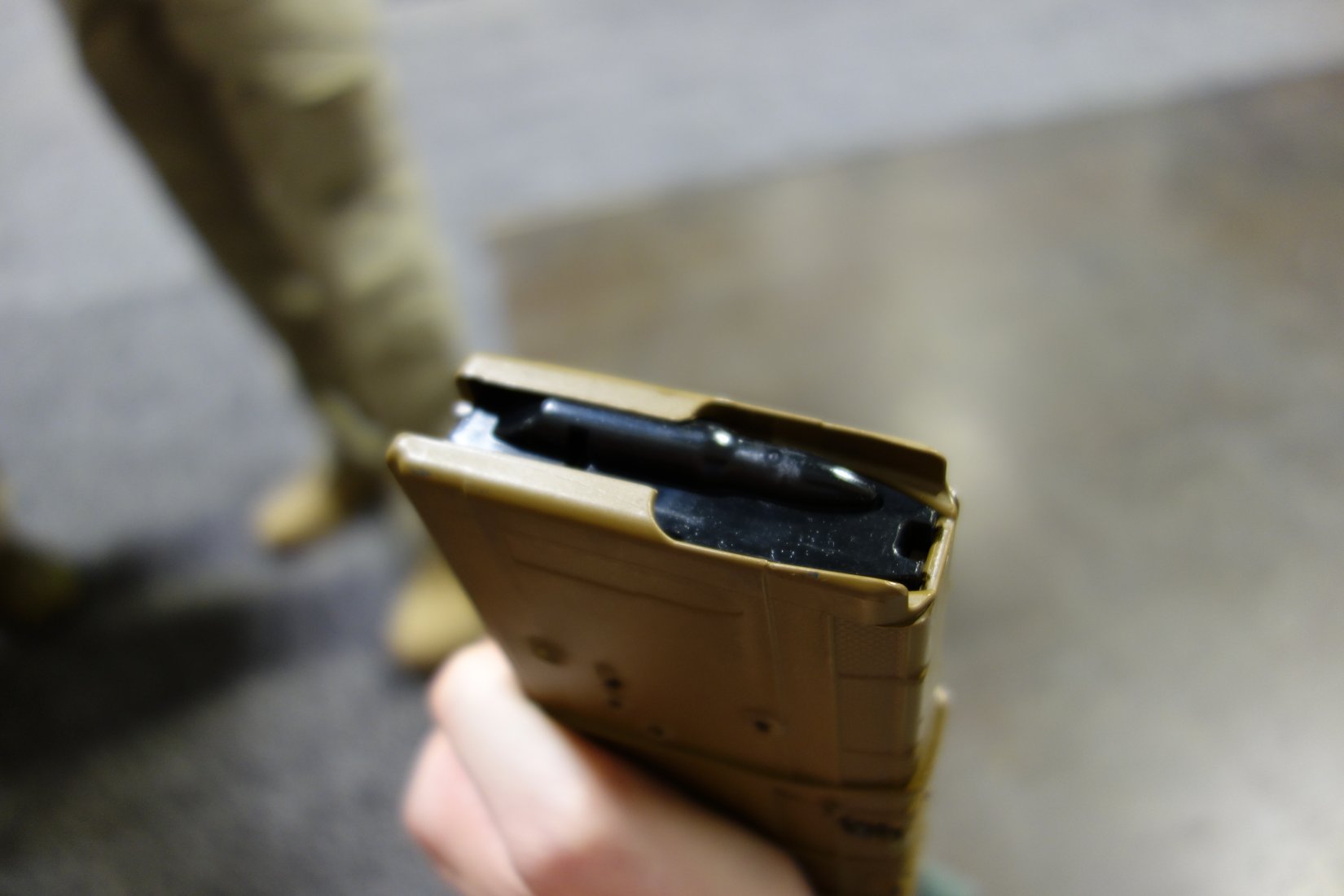 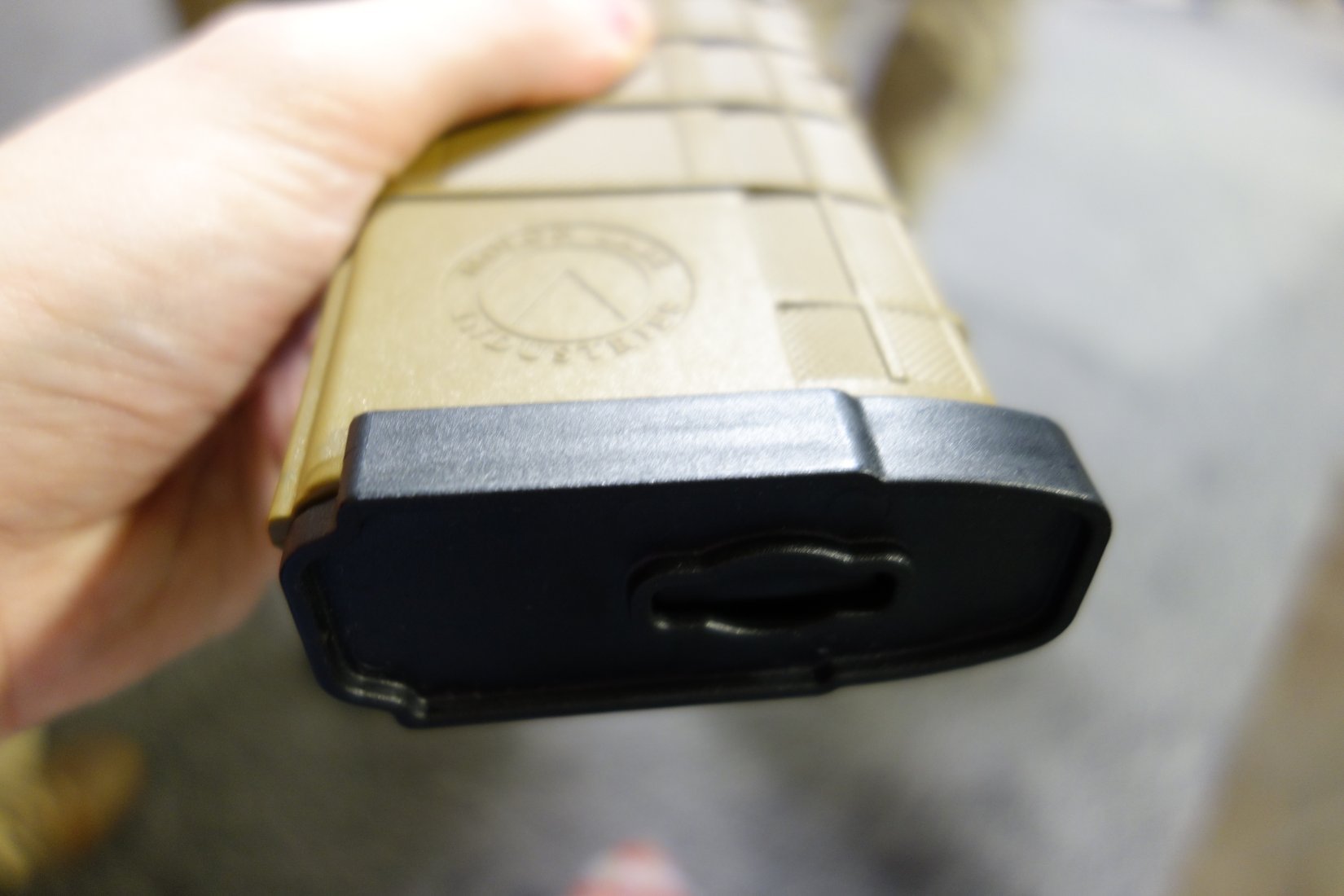 David Crane started publishing online in 2001. Since that time, governments, military organizations, Special Operators (i.e. professional trigger pullers), agencies, and civilian tactical shooters the world over have come to depend on Defense Review as the authoritative source of news and information on "the latest and greatest" in the field of military defense and tactical technology and hardware, including tactical firearms, ammunition, equipment, gear, and training.
Previous HERA Arms H3MAG 5.56mm/.223 Rem. 30-Round Polymer Rifle Magazine with Round-Count Viewing Window for the Tactical AR-15 Carbine
Next Tuff-Writer Launches The Ultimate Titanium Clicky Pen Project Through Kickstarter: Project launched to create the first run of stunning new titanium tactical pens!