People who own and carry Ruger semi-auto pistols seem to swear by them, and we’ve only heard good things about them regarding their reliability. Reliability is the single most important aspect of any defensive/tactical firearm. So, if you have to…

go with a double-action (DA/SA) auto, and you’d like to go .45ACP, the new Ruger P345 would appear to be a viable option. Hopefully, Ruger will introduce a blackened-slide (black finish) and O.D. green slide versions of the Ruger P345 pistol, soon. We’ll try to get our hands on a KP345PR for T&E, soon.

Click here to read a press release on the Ruger P345 pistols.

It should be noted that DefenseReview doesn’t particularly like double-action/single action (DA/SA) autos, that much. First, we don’t like the heavy double-action (DA) first shot/light single-action (SA) subsequent-shot transition. We prefer the single-weight/(relatively) light trigger-pull of the single-action auto’s and Glocks. 1911’s (pistols) and Glocks both feature a very short trigger reset, which the author greatly appreciates. This allows for extremely fast follow-up shots. Secondly, we don’t appreciate slide-mounted sweep-up manual safeties that many double-action (DA/SA) autos utilize. We much prefer either the single-action auto’s frame-mounted sweep-down manual safety (featured on the 1911 pistol and Browning/FN Hi-Power), or Glock Safe-Action arrangement (no manual safety or decocking lever to worry about). 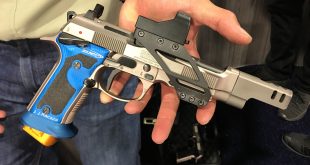