DefenseReview came across an interesting drop-in gas piston/op-rod system at the Osprey Defense booth at SHOT Show 2008 called the OPS-416 Gas Piston Conversion. While the "416" nomenclature would appear at first to be a reference or homage to the Heckler & Koch HK416 gas-piston-driven AR-config (AR-16/M16-config) rifle/carbine/subcarbine/SBR (Short Barreled Rifle), it may be a reference to the material from which it’s machined (416 stainless steel billet). However, the Osprey Defense OPS-416 Gas Piston Conversion is MUCH less expensive than the 416 (HK416), since it’s just a drop-in unit, quick-conversion unit that can be applied to any AR-platform weapon.

Let’s take a look at Osprey Defense’s performance and attribute claims for the OPS-416: 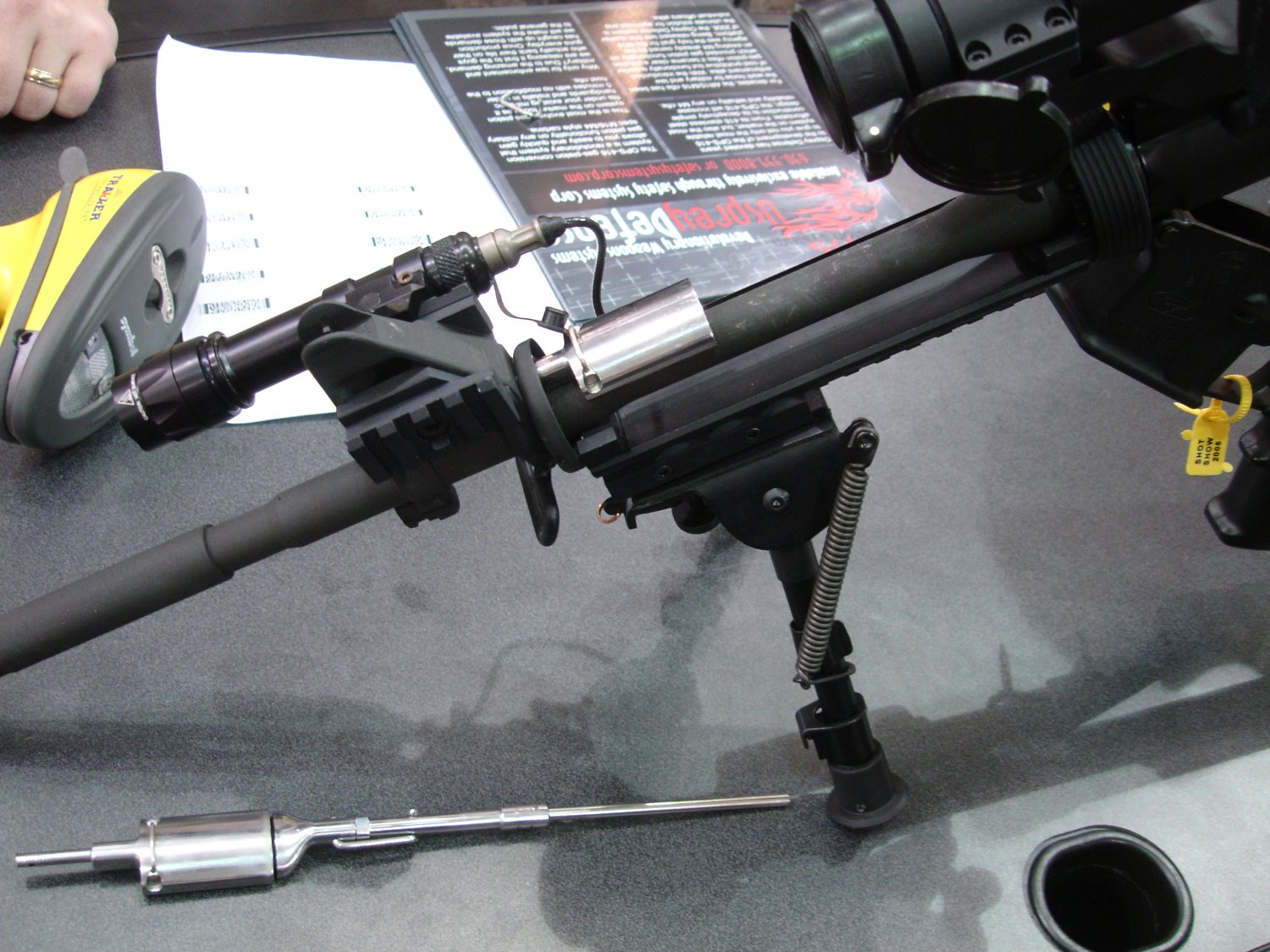 – Virtually eliminates fouling of the weapon.
– Five times "increased reliability" which we (DefenseReview) interpret as meaning 5 times more reliable than a standard AR-15/M16-platform weapon utilizing a direct-gas-impingement system.
– Five times the number of rounds between cleanings/maintenance.
– Allows the end-user/shooter to use is AR-15 rifle or carbine by simply replacing the standard gas tube with the OPS-416 drop-in gas piston/op-rod unit/system.
– Allows the end-user/shooter "fire his gun filthy" under adverse conditions like sand, mud, dirt, water, ice and snow.
– Self cleaning in that it "actually removes it’s own contaminants."
– No venting holes/entry points for contaminants and dirt to enter the system.
– Machined out of a billet of pure 416 stainless steel.

Osprey Defense is offering all of these performance advantages/increases and attributes "at a price you won’t believe." Defense Review can’t rember what that price is at present. We’ll find out and edit this article accordingly. At present, the Osprey Defense website states the the OPS416 Gas Piston Conversion is only available to law enforcement and military end-users. Apparently, though, it will also available to civilians through distributors/dealers in the future (unconfirmed/unverified). DefenseReview finds Osprey Defense’s self-imposed Mil/LE-only restriction curious, from a financial standpoint, unless it’s a strategic marketing move to get a lot of "cool guys", i.e. Mil/LE tactical professionals, using them, which will enhance demand on the civilian side, since civilian tactical shooters and collectors often want to own and shoot what the tactical pros are using.

Now, why would any military Special Operations (SpecOps) assaulters/operators and law enforcement SWAT operators want to use a quick drop-in gas piston system like the OPS-416 instead of an HK416, POF P-415 (or P-416), or LWRC M6A2? Well, if they have the money and procurment capability for one of the latter, they probably wouldn’t. However, a drop-in gas piston conversion system is a much easier sell and acquisition, since it’s FAR less expensive / MUCH cheaper than purchasing one of those complete weapons and can be used to convert direct gas impingement guns that already exist in the inventory. So, you’re really only procuring a "upgrade part", "replacement part" or "accessory" to modify or "upgrade" an existing in-house weapons platform, which is a much easier sell to the higher-ups, and much quicker to accomplish. Will it be every bit as good as the complete built-from-the-ground-up gas-piston-driven weapon system (rifle/carbine/SBR)? Perhaps not, but sometimes you just need "good enough". If the drop-in gas piston/op-rod system is rugged and reliable, and specifically durable and reliable enough to handle whatever mission profile the unit/team has, well, that’s really all you need. 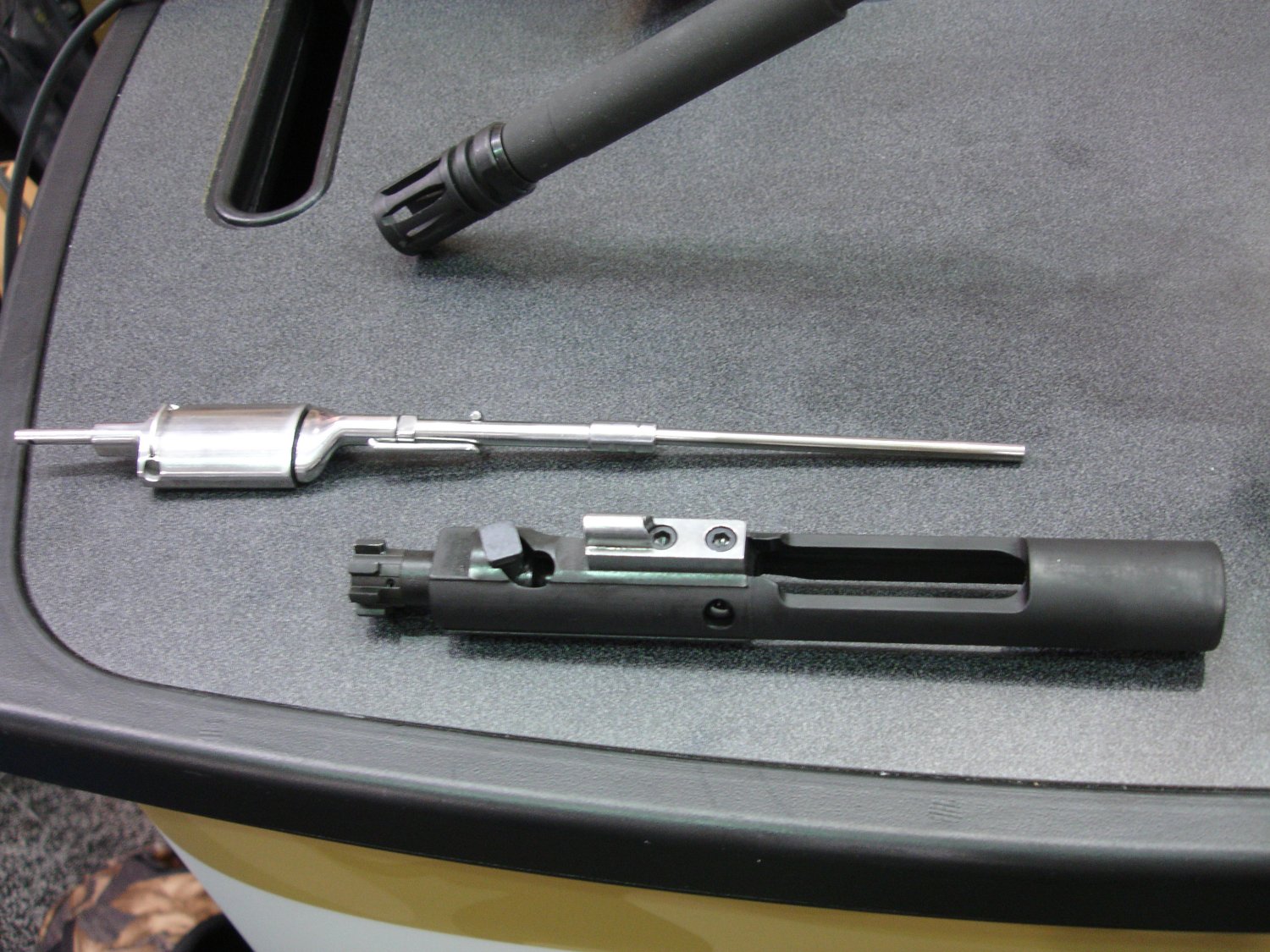 As to Osprey Defense’s "5 times increased reliability" claim, DefenseReview is interested to see the testing data on which the company is basing that claim. Specifically, we’d like to know who conducted the testing (in-house or independent), how many rounds, what ammo brands and types, what conditions (adverse conditions, etc.), testing methodology and protocol, etc.

Installation instructions for the OPS-416 are simple (provided you have a vise) and straightforward. Just don’t forget your safety glasses! According to the diagram, the OPS-416 gas-piston/op-rod component consists of eight (8) pieces. The replacement gas key on the bolt carrier a.k.a. bolt carrier key (see photo at left) adds at least one additional piece to the system.

DefenseReview is going to attempt to acquire an OPS-416 unit for T&E, soon. In the meantime, we’re going to try to get some independent end-user feedback from any Mil/LE end-users, Mil/LE and civilian tactical shooting instructors, gunwriters, and any civilian 3-Gun Tactical shooters who have experience with the system. We’re particularly interested learn whether or not the OPS-416 Gas Piston Conversion has any adverse effect on the weapon’s accuracy or firing impulse to the shooter (felt recoil aspect) vs. the original gas tube setup (direct-gas-impingement system).

Right-Click here and then click on "Save Link As" (Mozilla Firefox) or "Save Target As" (Micorosoft Internet Explorer) to download and view the the Osprey Defense OPS-416 Gas Piston Conversion demonstration video and see an OPS-416-outfitted weapon in action.

Right-Click here and then click on "Save Link As" (Mozilla Firefox) or "Save Target As" (Micorosoft Internet Explorer) to download and view the the Osprey Defense OPS-416 Gas Piston Conversion installation video.

Editor’s Note: The HK416 carbine/SBR/subcarbine is currently in use with U.S. Army Special Forces (SF), including Combat Applications Group (CAG) / 1st Special Forces Operational Detachment Delta (1st SFOD-D) a.k.a. Delta Force, various other U.S. Army units (at least until recently), and various Special Operations (SpecOps) units under SOCOM a.k.a. USSOCOM. However, U.S. Army Asymmetric Warfare Group (AWG) recently had to relinquish their 416s (HK416s)–approximately 400 of them–under what essentially amounted to an HK416 confiscation program, and DefRev will be publishing more info on this, soon.

David Crane started publishing online in 2001. Since that time, governments, military organizations, Special Operators (i.e. professional trigger pullers), agencies, and civilian tactical shooters the world over have come to depend on Defense Review as the authoritative source of news and information on "the latest and greatest" in the field of military defense and tactical technology and hardware, including tactical firearms, ammunition, equipment, gear, and training.
Previous B.E. Meyers / SureFire Open-Prong Flash Hiders/Adaptors for Special Operations
Next HK416 Carbine/SBR Confiscation Program Unleashed on U.S. Army AWG