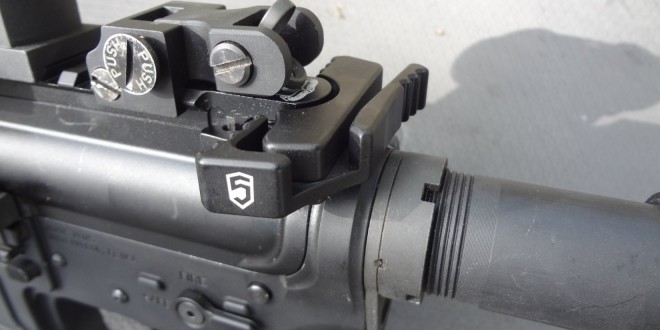 The following article is property of DefenseReview.com (DR), and is copyrighted material. If you are reading this article on another website other than DefenseReview.com, please email us the website address/URL (where the unauthorized DR article reprint is located) at defrev (at) gmail (dot) com. Thank you. 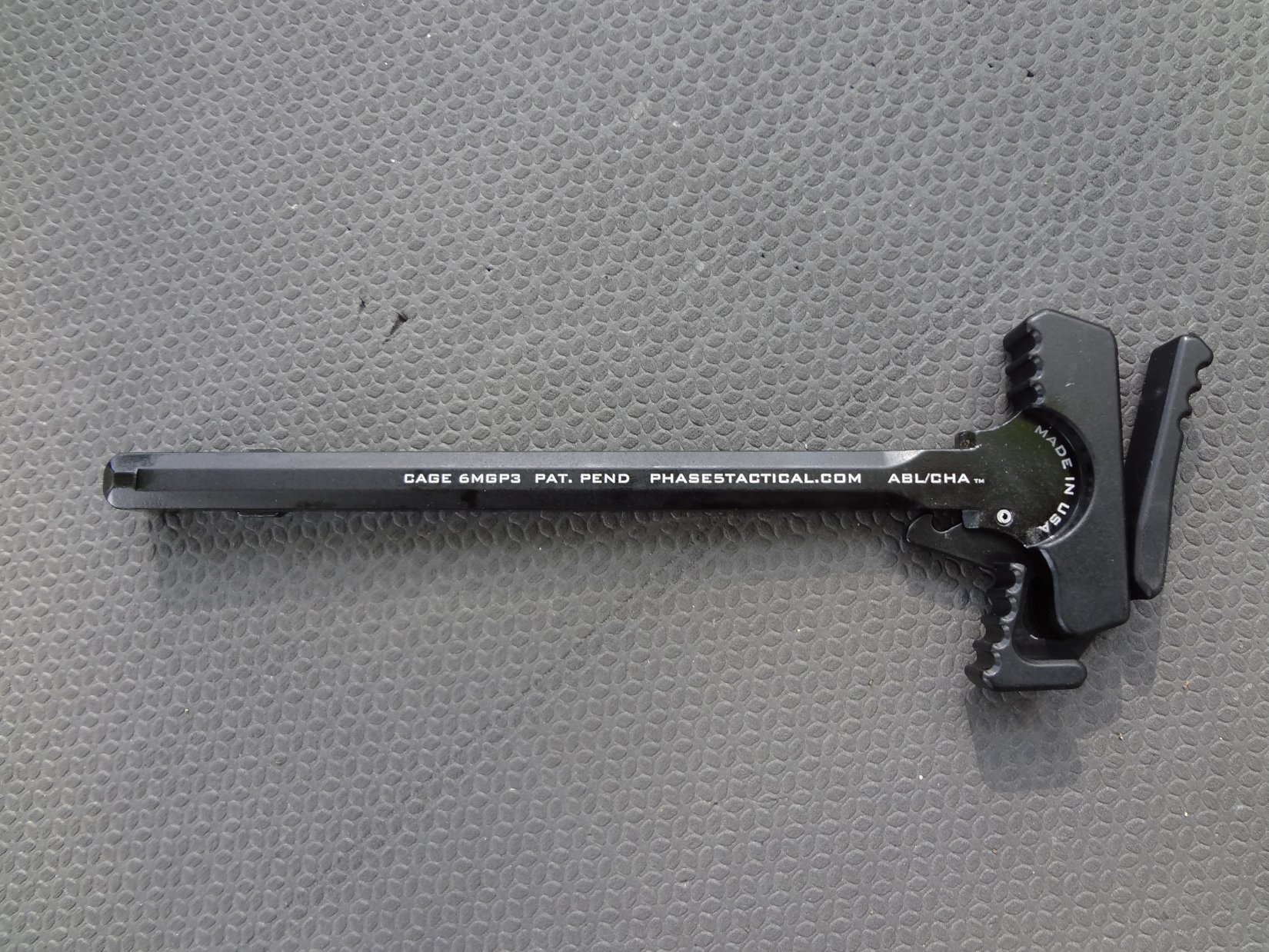 Now, being a left-handed rifle shooter, I've always needed something more than a stock/MILSPEC charging handle, anyways. While using a standard/MILSPEC right-handed charging handle is doable, an ambidextrous one allows left-handed shooters to charge the AR-15 like a righty with their support hand, while keeping their firing hand on the pistol grip. The Phase 5 Tactical ABL/CHA ambi charging handle, with its right side pull latch and the lefty push in lever, essentially doubles the grabbing surface areas of standard charging handles out there on the market. In addition, both the right and left levers have nice deep (rounded) serrations, decreasing the chances of your fingers slipping off when you're ripping the charging handle back under pressure, such as clearing a jam in the middle of a 3-Gun stage or combat/tactical engagement. 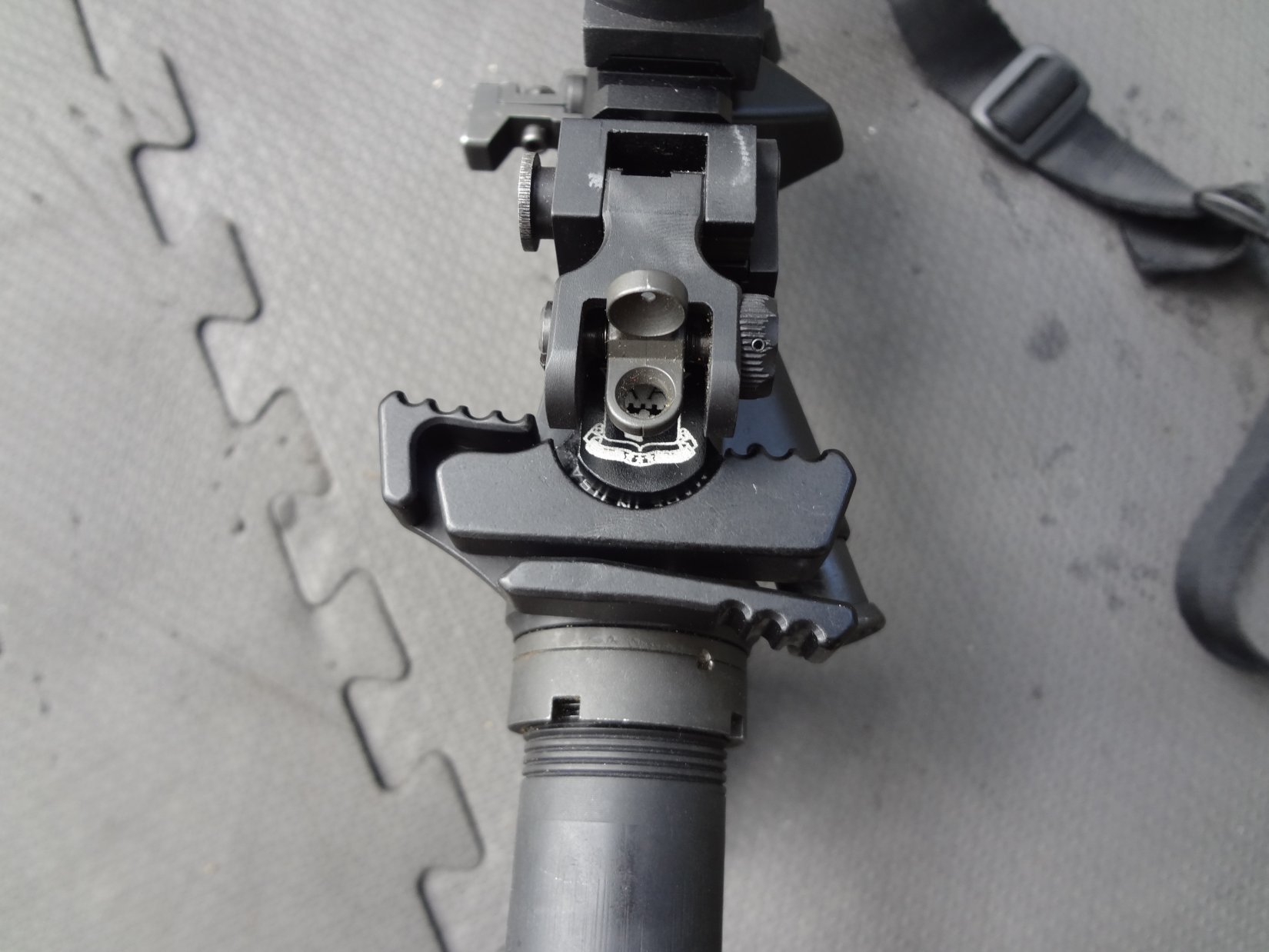 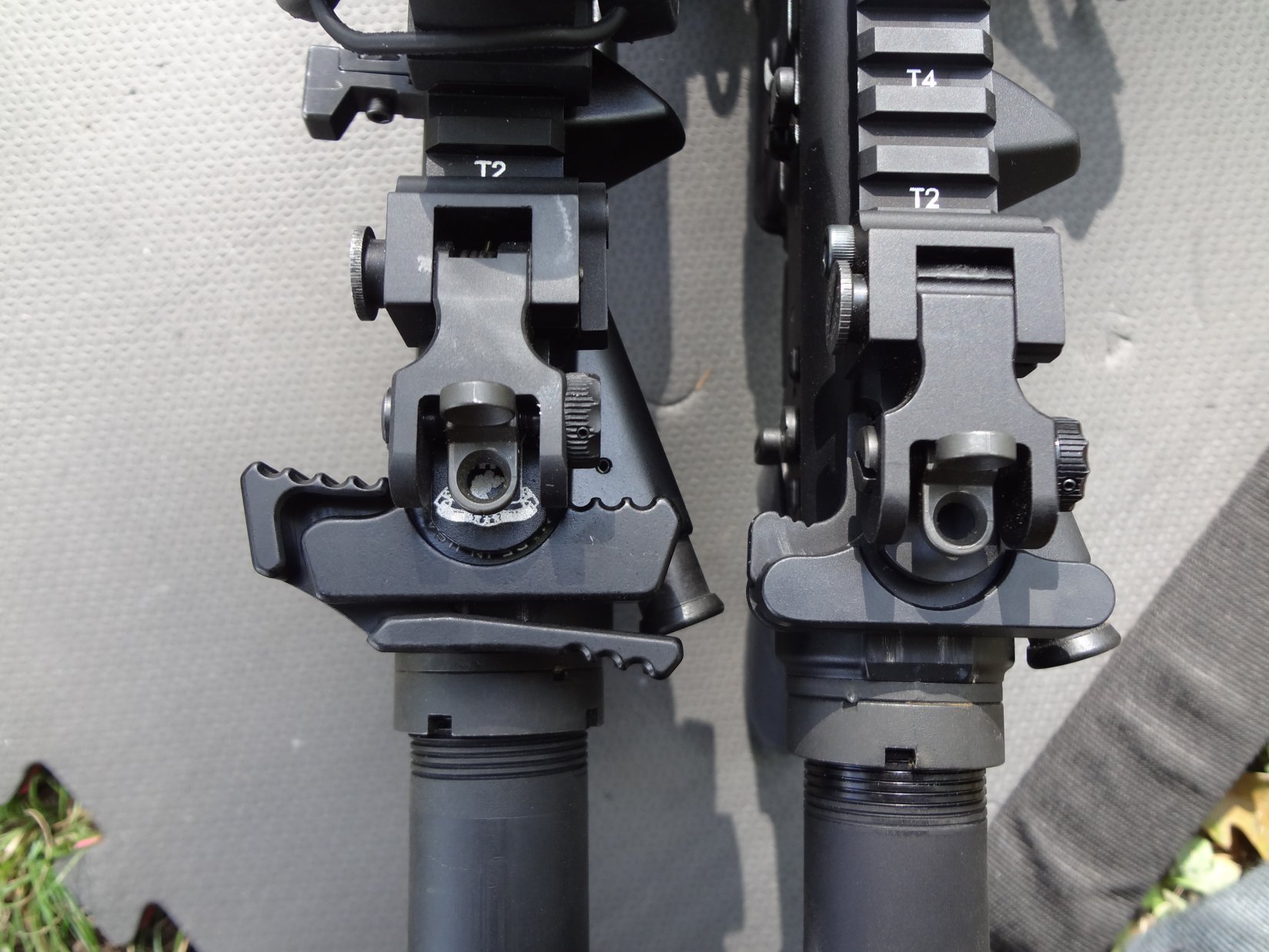 An argument against MIL-SPEC

With just about double the surface area AND being ambidextrous, who wouldn’t want to use one of these? Well I actually know some purists out there who believe that the controls of an AR-15 are fine as they are, and should not be changed. Some feel that trying to enhance or change them could actually lead to the rifle becoming less reliable. The two most common things I hear all the time when it comes to AR controls on AR are: "If Eugene Stoner had seen a requirement for ambi controls, he would have put them on the AR-15/M16 from the start," and "I don’t like large things sticking off the side of the rifle. It could hang up on something."

My answer? First, only righties feel the AR controls should not be changed. Fact is, a lefty without left-handed controls cannot hope to run the AR as fast or smooth as a righty. When your life could be on the line, why wouldn’t you not want a setup that facilitates you being able to be as fast as possible? When it comes to an item like an ambi selector lever, that’s an easy argument to win, how it applies to a charging handle to some may take more convincing. Second, righties can benefit from ambi controls, too, particularly those trained in ambidextrous weapons-handling and shooting during CQB/CQC (Close Quarters Battle/Close Quarters Combat) gunfighting, specfically around barriers and inside structures.

Admittedly, there's not much need to rapid-charge your weapon going into a firefight, since (most of us would say) our rifles are already chambered before we go out into harm’s way. During every overseas tour I've been on, my rifle is chambered 90% of the time. Where the large, oversized levers on a charging handle really make their money is in helping to clear jams. I can’t think of one jam with an AR that does not require you to have to try and pull back on the charging handle to clear. Having the large extended levers really aids in this procedure, especially in the dark, on the move and with gloves on.

Looking at the stock MIL SPEC charging handle, I find it is totally inadequate for today’s AR’s. One must keep in mind that the design of a MIL SPEC charging handle has really remained unchanged since the M16A1, and was designed to go along with the relatively long slope of the rear end of the fixed carrying handle. The unlocking lever portion does not have to be that long in terms to stick out, clear of the carrying handle rear sight area. Even with the introduction of the SOPMOD program and the M4 when it came out in the late 1990’s, the 1st rear backup flip up sight was pretty slim and unobtrusive, being basically just a long rear post with only windage adjustments. Now compare that with the more modern back-up iron sights (BUIS) today that feature large windage and elevation knobs, spring loaded actions and other features.

The small MIL SPEC charging handle can now be easily overlapped and hard to get to because of these robust back up sights. It therefore only makes sense to enlarge the charging handle levers so shooters can actuate them with ease. 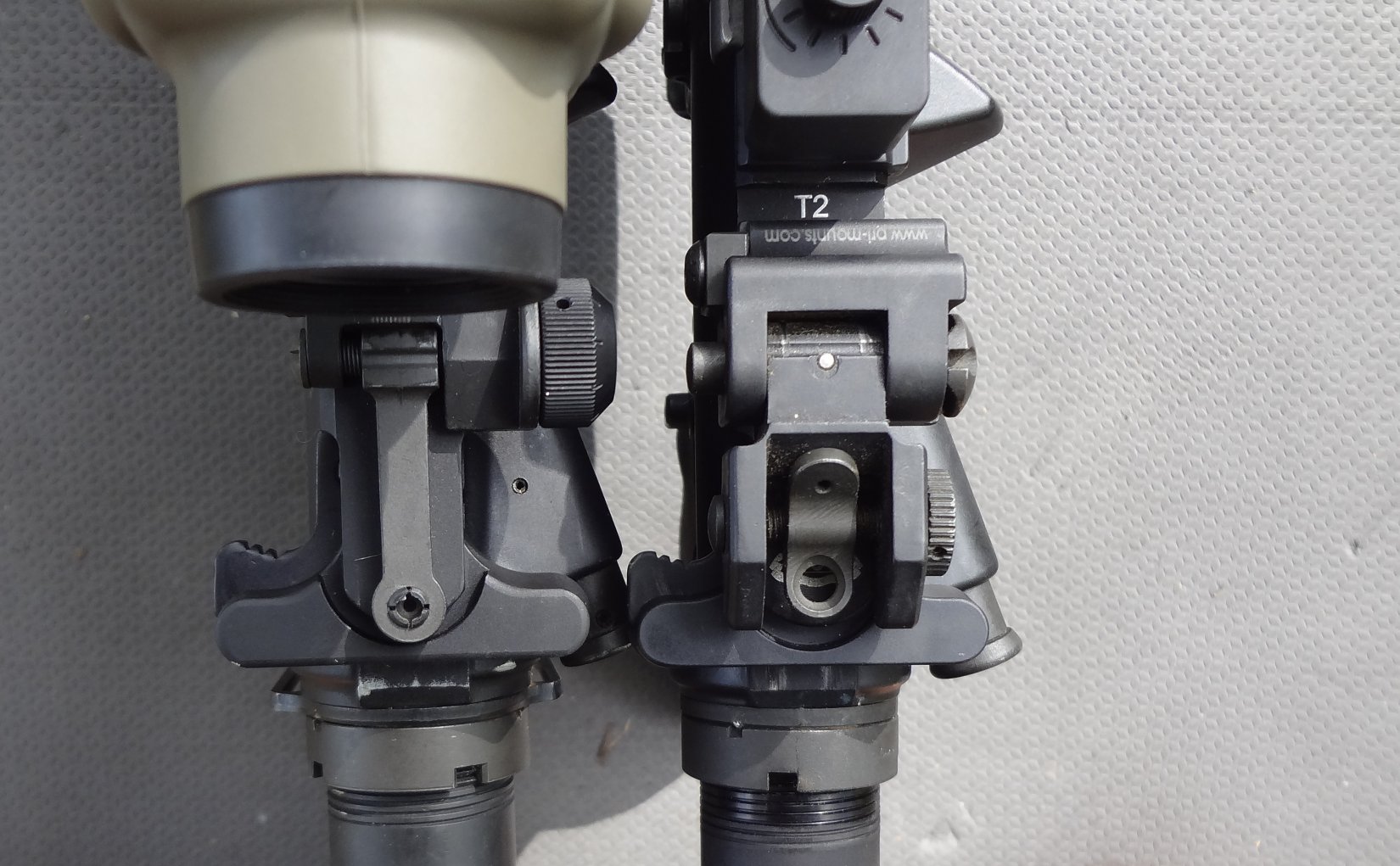 For a lefty (and righties who shoot ambidextrously during CQB/CQC), the need for a large AMBI lever is even more profound, because with an AMBI charging handle, you've got to have a design that’s easy to get to above the forward assist. Getting back to the Phase 5 Tactical ABL/CHA, it has the largest left-handed actuating lever I have yet to see on an AMBI charging handle, making it just that much easier to get a grab on it when you need it in a hurry.

Now, for those who make the argument that they don’t like things sticking off their rifle for fear it could cause the rifle to hang up on something in a firefight, while that can indeed be cause for concern, I personally don't think it’s that big of an issue. When it comes to items hanging off your rifle, I think oversized controls are the least of your worries. Most tactical types can agree that a weapon light is a must-have item on any fighting rifle, and when you look at almost all the rifle lights out there, they all hang off the side of the rifle at least a inch. Combine this with any fore grips, optics and lasers, the oversized levers on things like charging handles, bolt catches and such really don’t stick out as far. 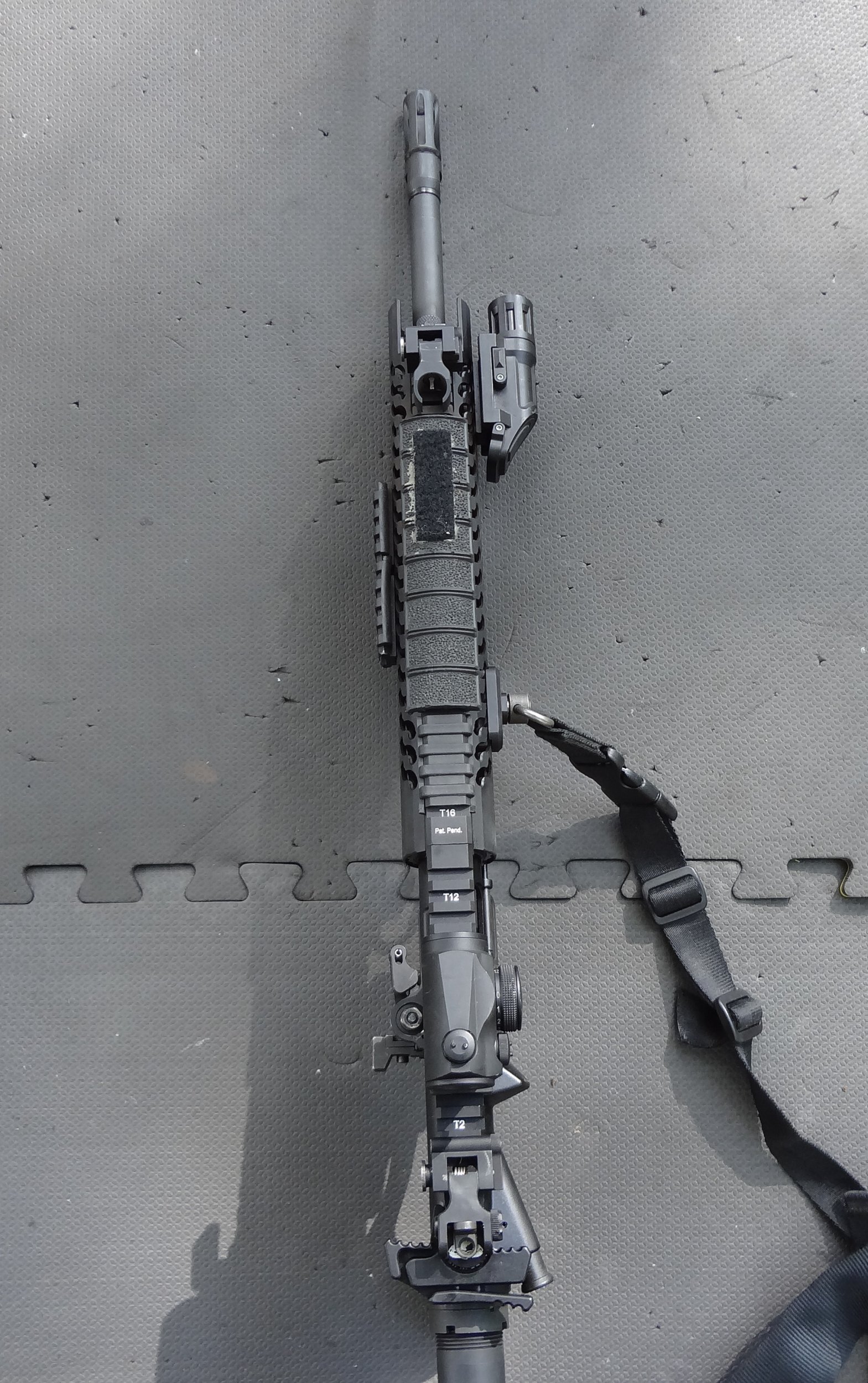 One item I mentioned earlier that I would like to touch on again is the need to rapid-charge your weapon. While it could come up in a tactical scenario, let’s hope you are tac-reloading (performing tactical reloads) and keeping your rifle fed, and have no bolts forward on an empty chamber in a real fight! But one area where rapid-charging your rifle does come up is during competition shooting, specifically 3-Gun. It's very common to start a course of fire with the rifle pre-staged at some point with a magazine in rifle on safe with no round in the chamber. So, having large controls on your charging handle can facilitate getting the rifle into action faster, since the larger levers are easier to find and grab under pressure.

The Phase 5 Tactical ABL/CHA ambi charging handle works like most other ambi charging handles. The righty latch lever, in particular, is no different than any other latch, just oversized. The method in which it operates for a lefty is based on the lever extending over to the right side on the charging handle, pivoting on the same single pin a normal charging handle uses, just instead of pull back to actuate it as a lefty shooter you push in with your non-firing hand thumb. 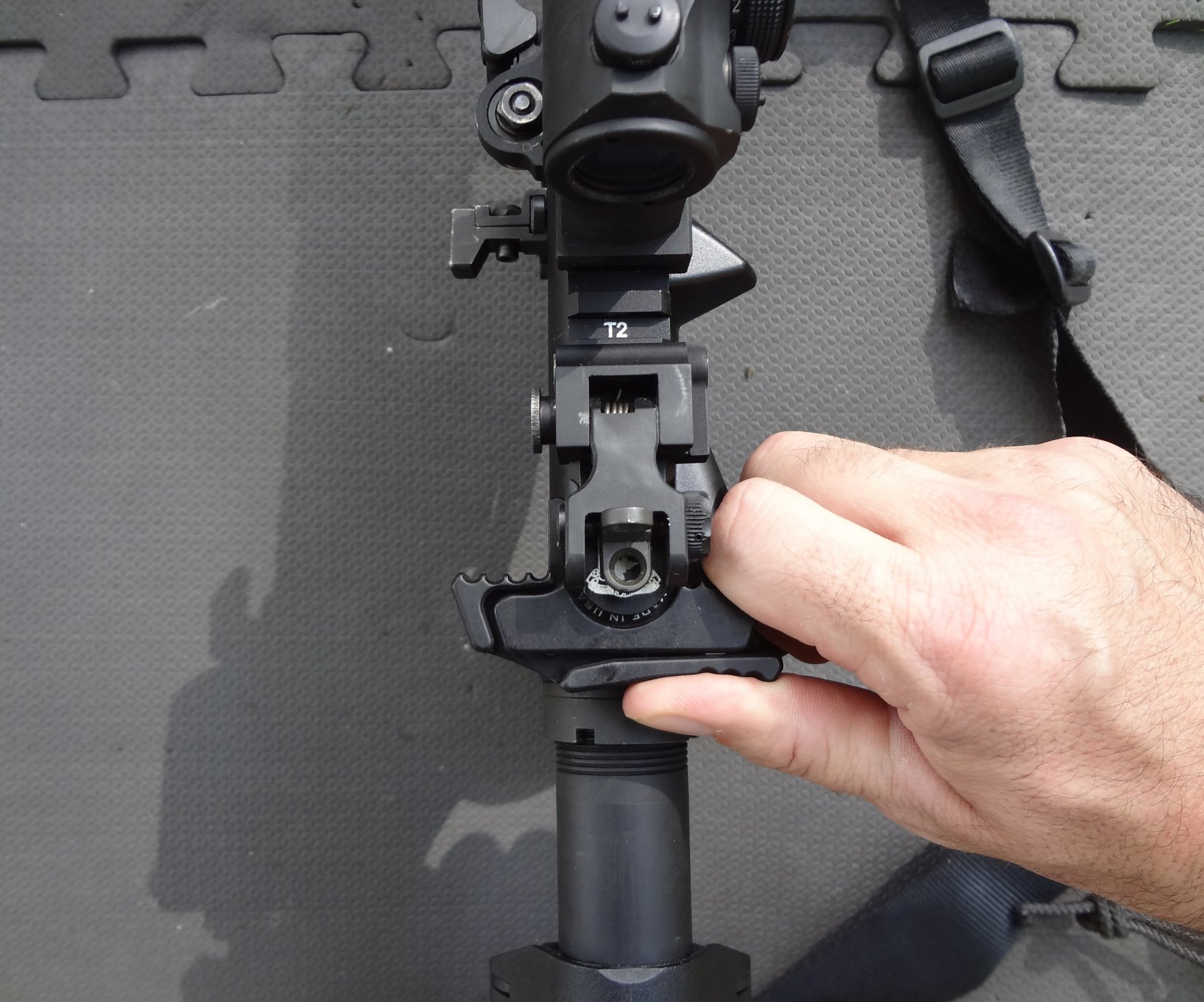 I know there are some newer charging handles out there that operate the same way either as a lefty or righty with the same pull back action. Again, I think the push-in lefty lever design is more positive for lefties. Now as a right handed shooter who just wants to have a fully ambidextrous rifle I can see where they would want the same operating action (straight pull back on the charging handle to operate it) regardless what shoulder they are shooting off of, for when they switch hands/sides to go around corners or shoot from some alternate positions.

If you have read any of my previous work here on DR (DefenseReview), you know I’m all for any accessory or piece of kit that can give you an edge, whether it be in a 3-Gun match or in a real-world combat engagement against an armed foe. The Ambi Battle Latch/Charging Handle Assembly offered by Phase 5 Tactical is one of the beefiest, most robust and well built ones I have used. It's not only well designed, but also made in America. The design is very simple, with no extra moving parts. It works off the same single pin that’s in a normal charging handle. My only real complaint right now is that I only have one and I could use a few more for my other ARs!

The Phase 5 ABL/CHA retails for $80.00. For those of you who might feel the price is a little steep, Phase 5 does offer just a drop-in ambi latch for $20.00. Although nowhere near as beefy as the full charging handle, it does have an oversized righty pull latch and the same push-in lefty latch design. 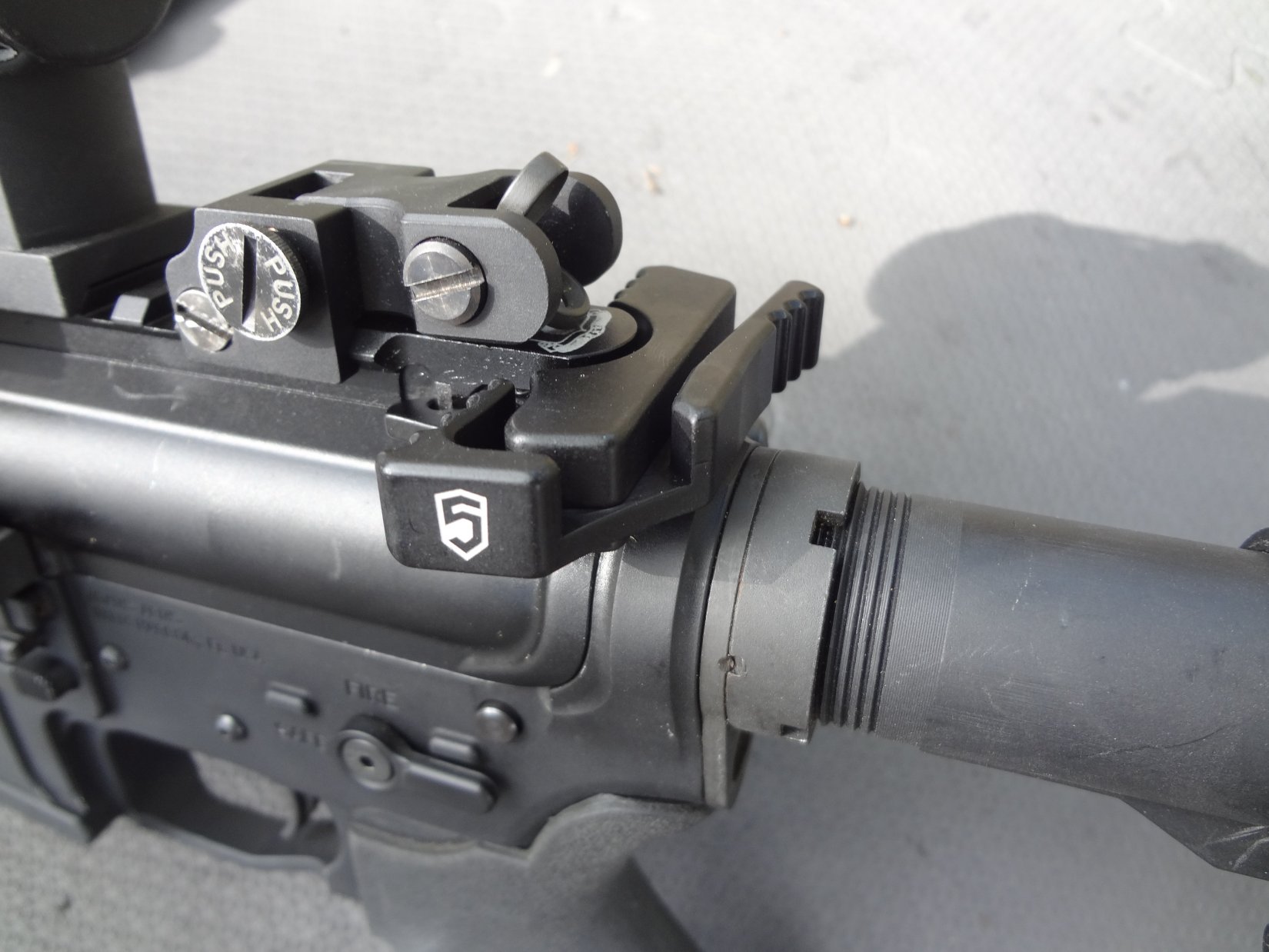 About the Author (Jeff Gurwitch):

© Copyright 2013 DefenseReview.com and Jeff Gurwitch. All rights reserved. This material may not be published, broadcast, rewritten or redistributed without receiving permission and providing proper credit and appropriate links.