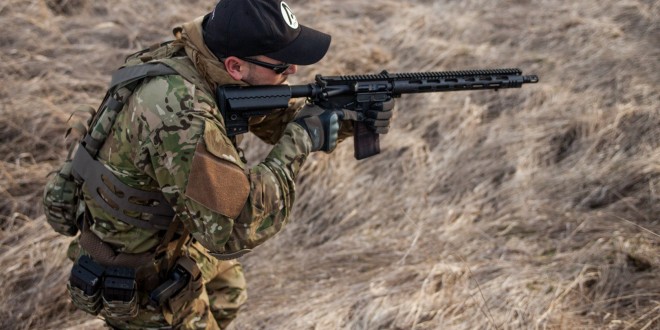 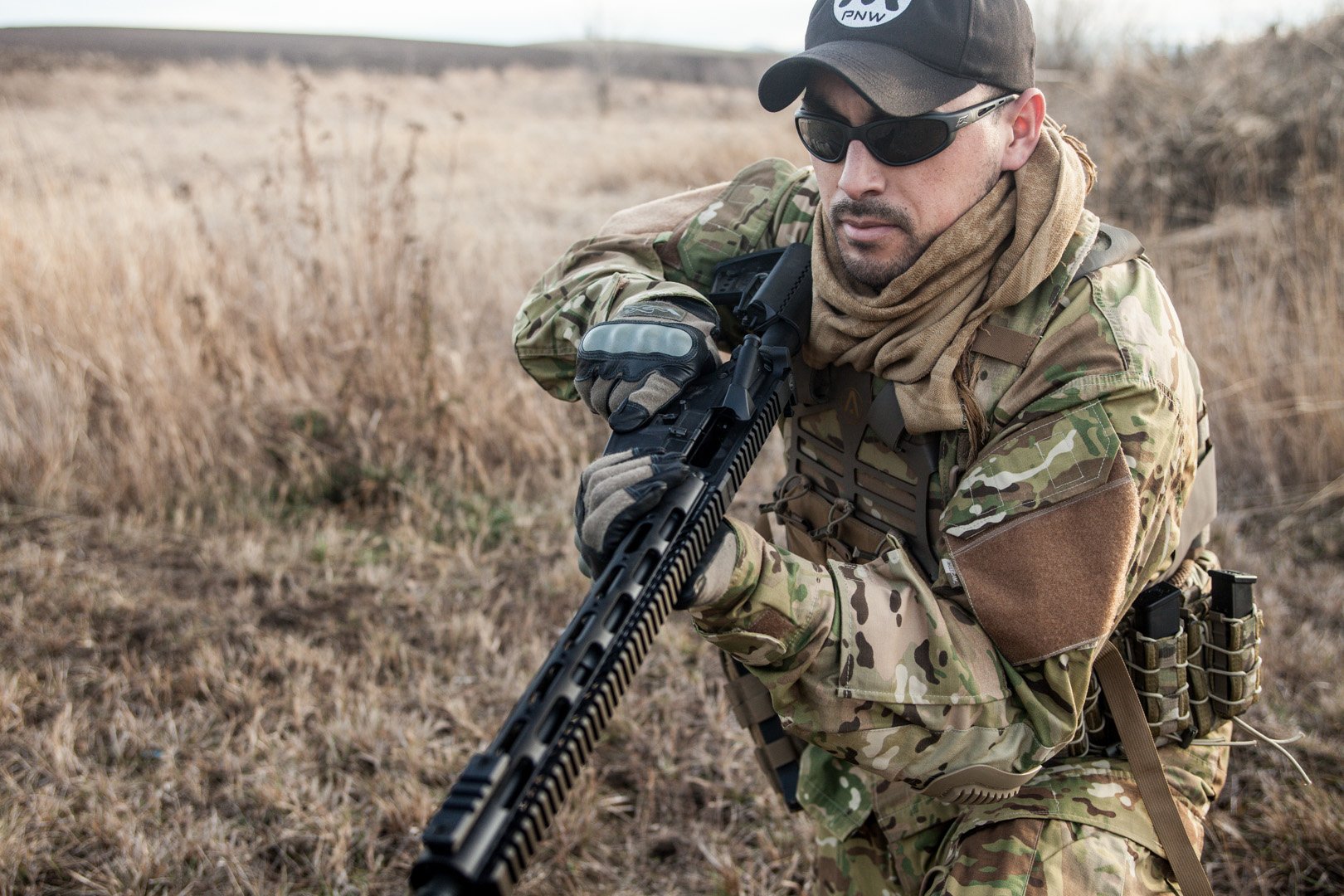 The combat caldren at PNW Arms has developed one seriously badass, high-quality mid-length Signature Series 300 AAC Blackout (300BLK) tactical AR-15 carbine 16" complete upper receiver assembly and ammo combo in order to make the 300BLK caliber as easily and inexpensively accessible to existing AR (AR-15) owners/end users (including civlian tactical shooters, hunters, military operators, and law enforcement personnel) as possible, allowing them to get on board the 300 BLK platform without blowing up their bank accounts. 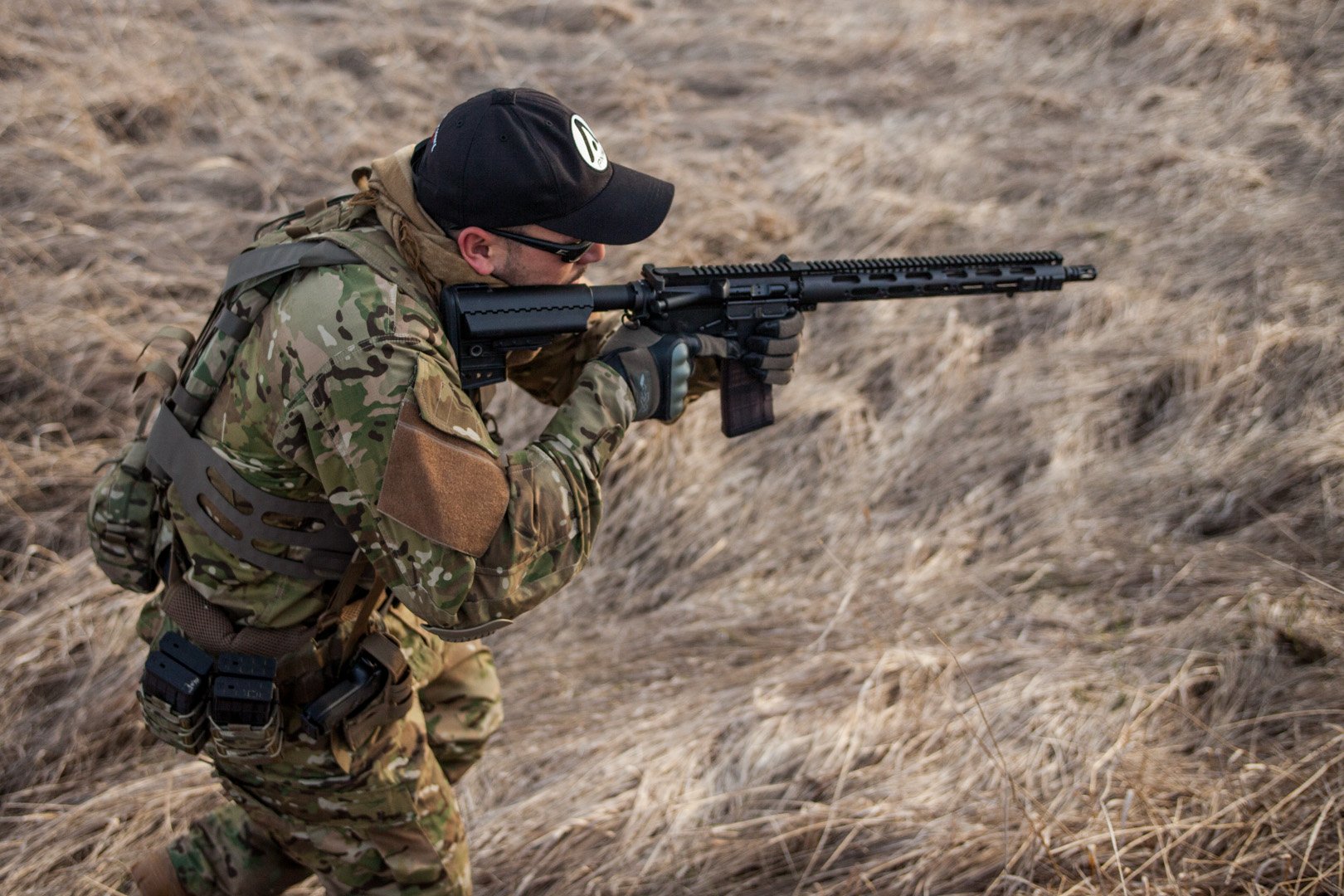 It should be noted that the PNW Signature Series 300BLK mid-length upper and case of ammo retail for over $945.00 USD and $345.00 USD, respectively, if purchased individually. So, $1095 is a pretty sweet deal. Just be aware that it's a limited time offer geared for the holiday season, and DefenseReview (DR) doesn't know how long the offer will last. So, you might want to get over there and check it out.

We should mention that we here at DR like both the 300 BLK AND 6.8 SPC (6.8x43mm SPC). We're fans of both cartridges. However, as much as we like the 6.8 SPC (6.8x43mm SPC) cartridge and weapons (Spec II), the 300BLK offers a few cost-and-conversion advantages. For example, the 300 BLK allows the shooter to utilize a MILSPEC AR lower with MILSPEC magwell with confidence (in its reliability), and virtually all of their tactical AR accessories, including all those MILSPEC 5.56mm NATO (5.56x45mm NATO) mags (magazines) they've invested in over time. 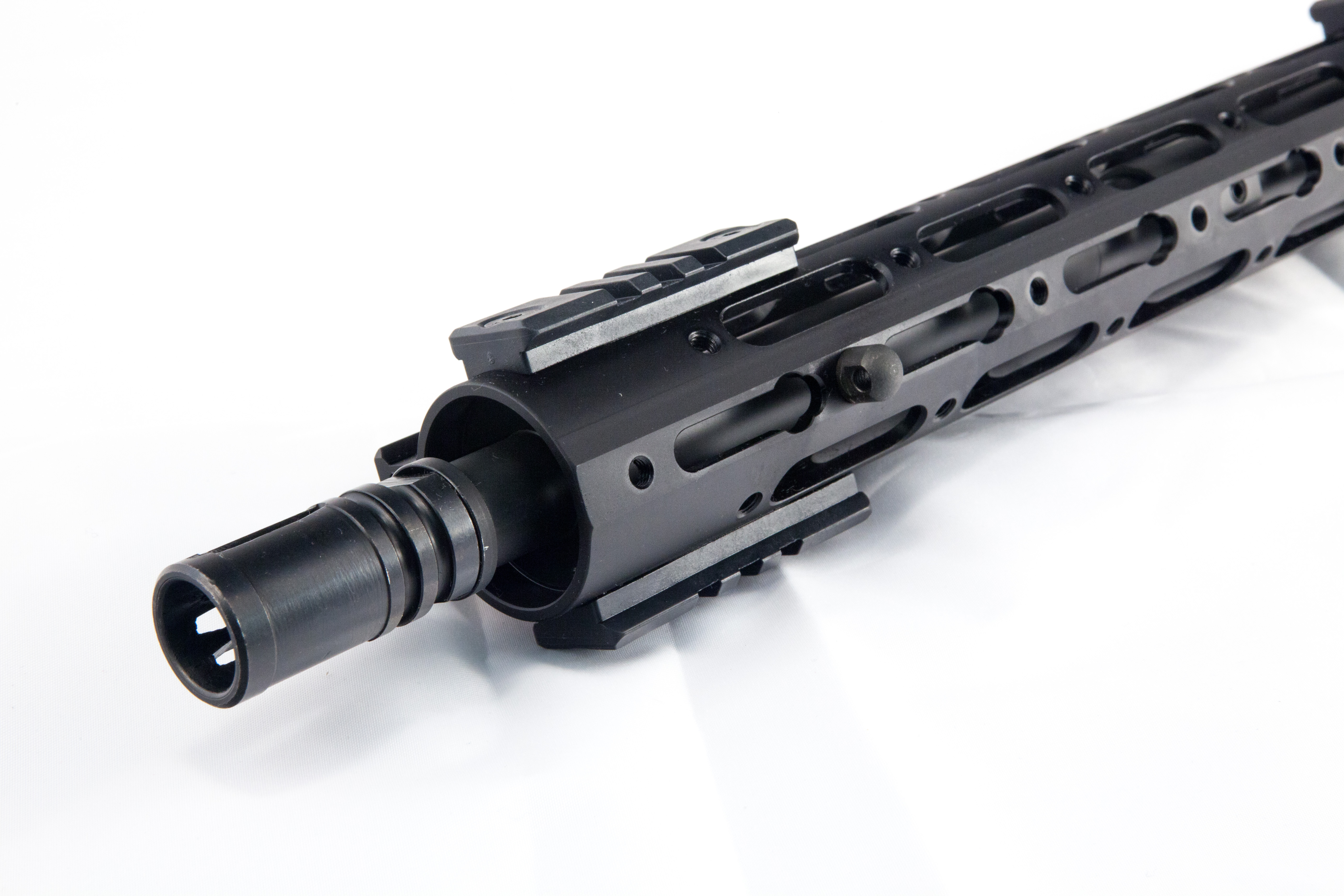 Regarding 300BLK versus 5.56mm, the terminal-ballistics advantage of 300BLK over 5.56mm at short-to-medium range combat engagements, particularly in dynamic CQB/CQC (Close Quarters Battle/Close Quarters Combat) are obvious, but 300BLK is also a legal hunting round for medium-sized game, so the PNW 300BLK upper can do double duty. PNW makes 125gr and 155gr 300BLK rounds that are great for taking down feral hogs, for example.

For certain combat/tactical operations and silent hunting purposes, PNW Arms makes a 220-grain (220gr) subsonic 300BLK round that they (PNW) say is "Hollywood quiet" the when employed with a muzzle can (silencer/sound suppressor). PNW also makes an economical 147-grainer (147gr) round that's available in quantity/bulk.

If you'd like to purchase additional 300BLK ammo in bulk, PNW Arms produces high-quality 300 BLK ammo in pretty much every grain weight you could want, and it's available at both retail and online stores such as LuckyGunner, MidwayUSA, Cabella’s and CheaperThanDirt. 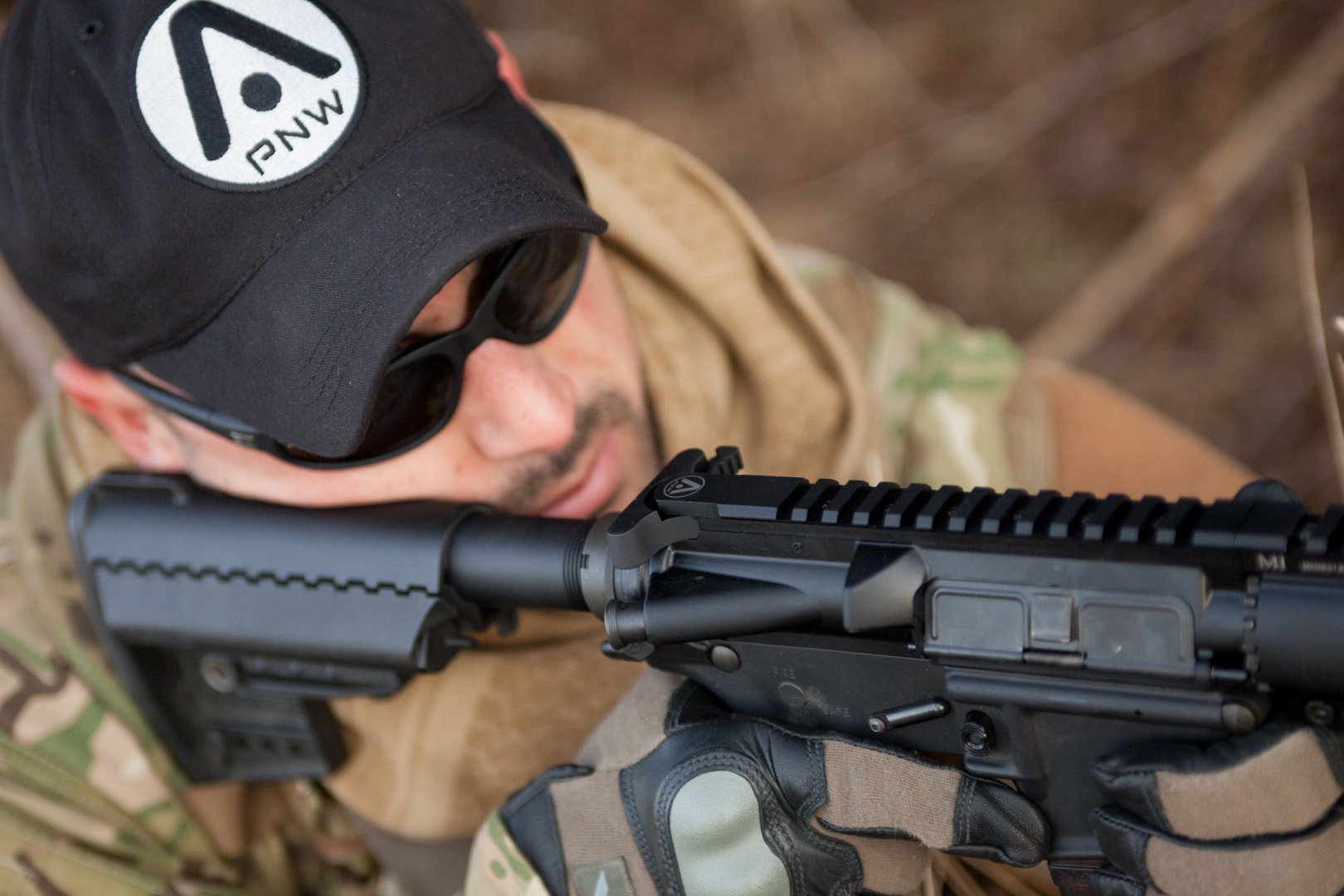 Editor's Note: Notice the PNW-branded/logo'd S&S Precision Plate Frame tactical armor plate carrier in several of the accompanying photos. Could they have developed their own proprietary version of the S&S carrier? Knowing them, they probably have. Rumor has it that PNW has also developed some interesting anti-rifle hard armor plates to go in it, so Defense Review will keep an eye on it.

In the meantime, click here to check out the PNW Arms 300BLK CONUS Delivery Program flyer on the 300 BLK upper and ammo deal. You can also click on the flyer image located to the right of the company contact info section at the bottom of this article, in order to enlarge and view it. 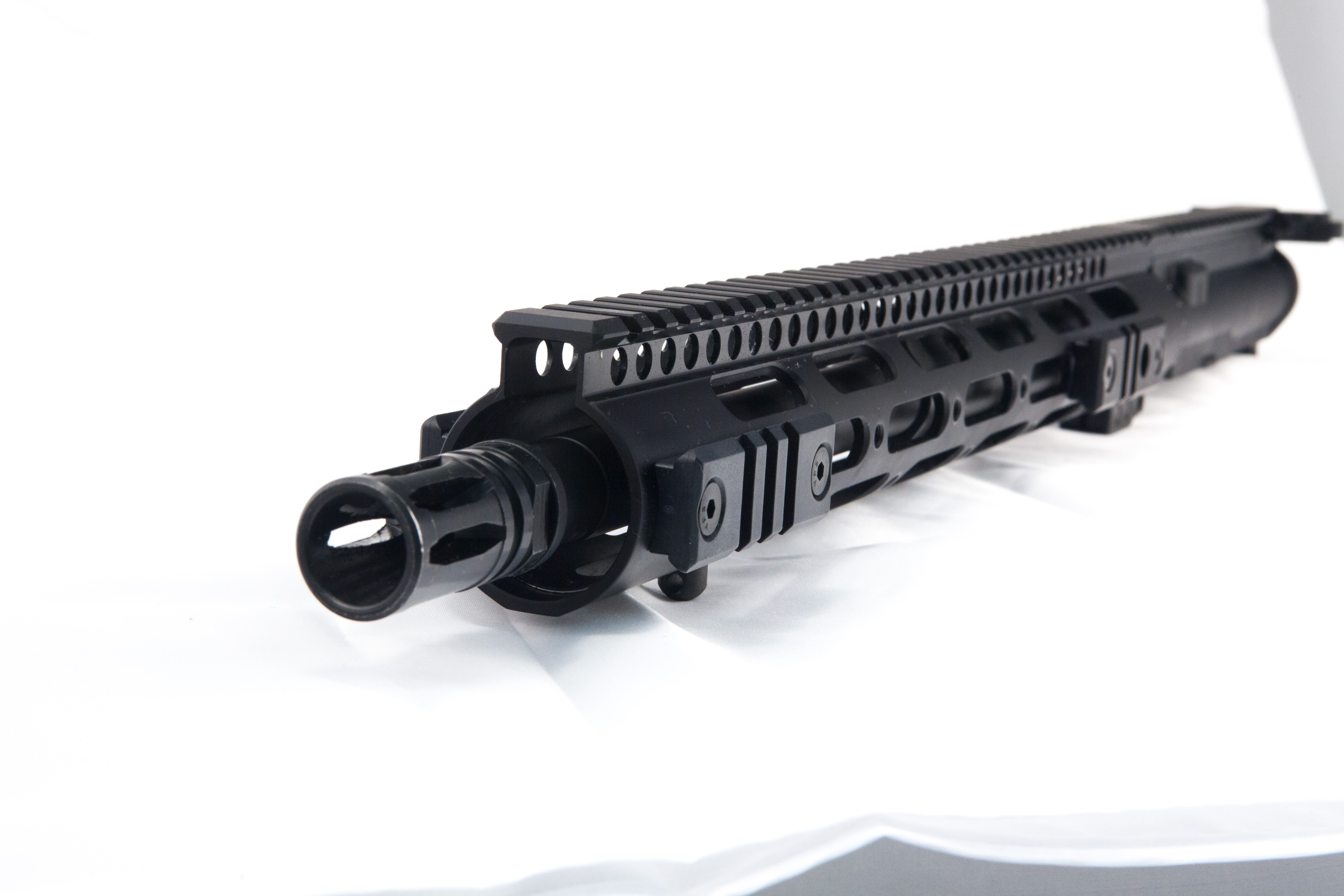 Virtually from its inception, the PNW Arms Weapons Science® Team has been at the forefront of research and development for the .300 Blackout round. Today, PNW is proud to introduce their rugged, reliable and accurate Signature Series Upper that enables shooters to convert their existing 5.56 AR platform to the popular .300 Blackout. The PNW Signature Series 300BLK Upper replaces your existing upper with no modifications and uses your existing AR lower and magazines. Built to exacting standards, the Signature Series Upper offers the improved ballistics of the .300 Blackout without the cost of a new rifle. The .300 Blackout round has 89% more frontal mass than the 5.56X45mm with sub MOA accuracy to 400 meters, and with the wide variety of ammunition, is the most versatile cartridge on the market today. 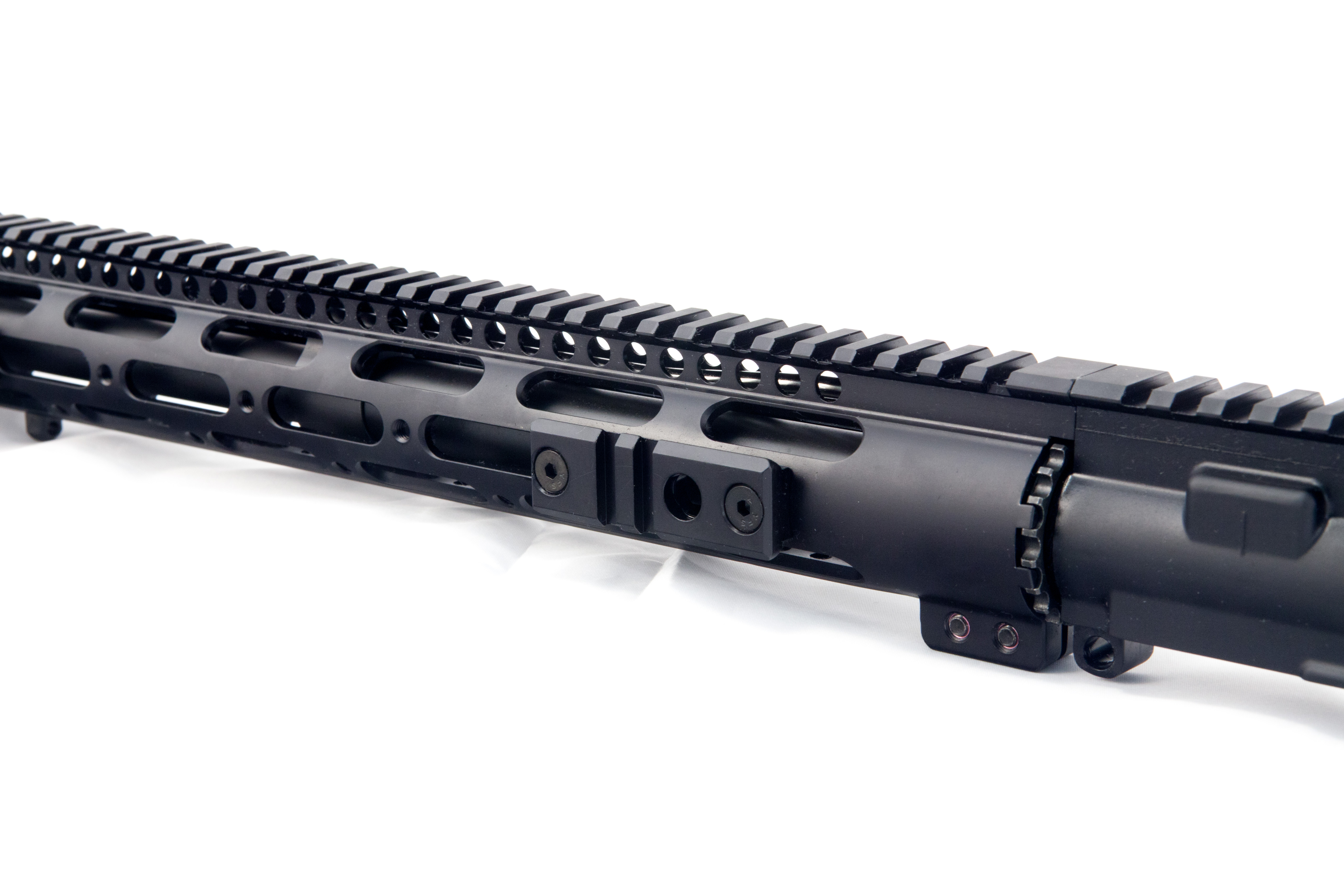 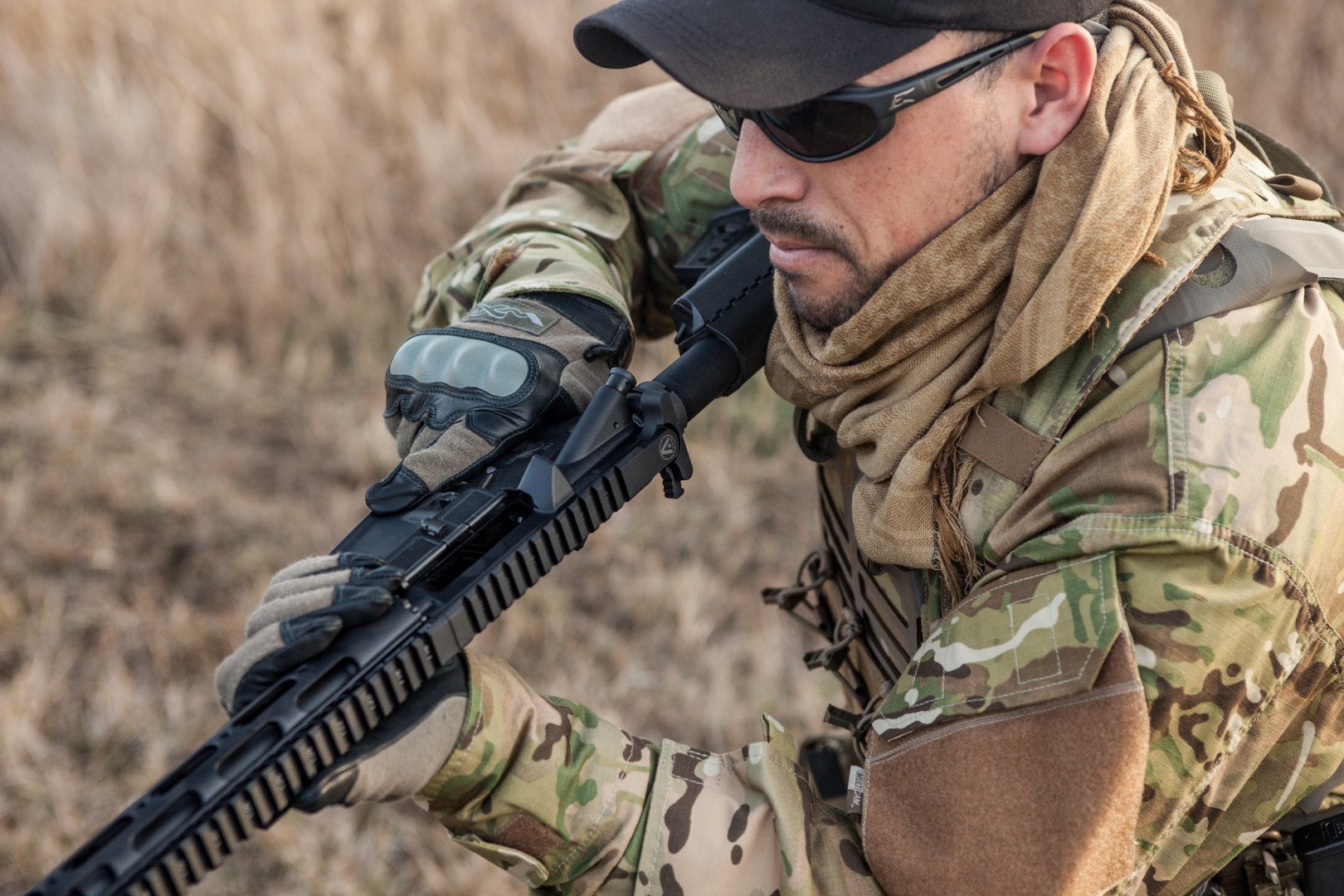 The V.2 Gunslinger Charging Handle [photo directly below] has a hard coat anodized finish and an enlarged release catch for immediate action. It is manufactured from a solid piece of 100% 6061-T6 billet aluminum, allowing it to be held to extremely consistent tolerances and maintain an exceptional level of strength. The 300 Blackout 7.62x35mm is a rifle cartridge developed in the United States and originally chambered in the M4 rifle. SAAMI approved the round specifications on January 17, 2011. It works with any standard AR-style platform bolt groups, lowers and magazines at standard pressures. PNW Arms produces the 300 BLK caliber in four ammunition types: Range, Subsonic, Match, and Hunting. PNW's versatile line of .300 Blackout cartridges offers a viable replacement to the 9mm SMG, the 5.56mm carbine, and intermediate range .308 platforms in one rifle. Threats from CQB to extended ranges can be quickly addressed by changing magazines, not weapons. 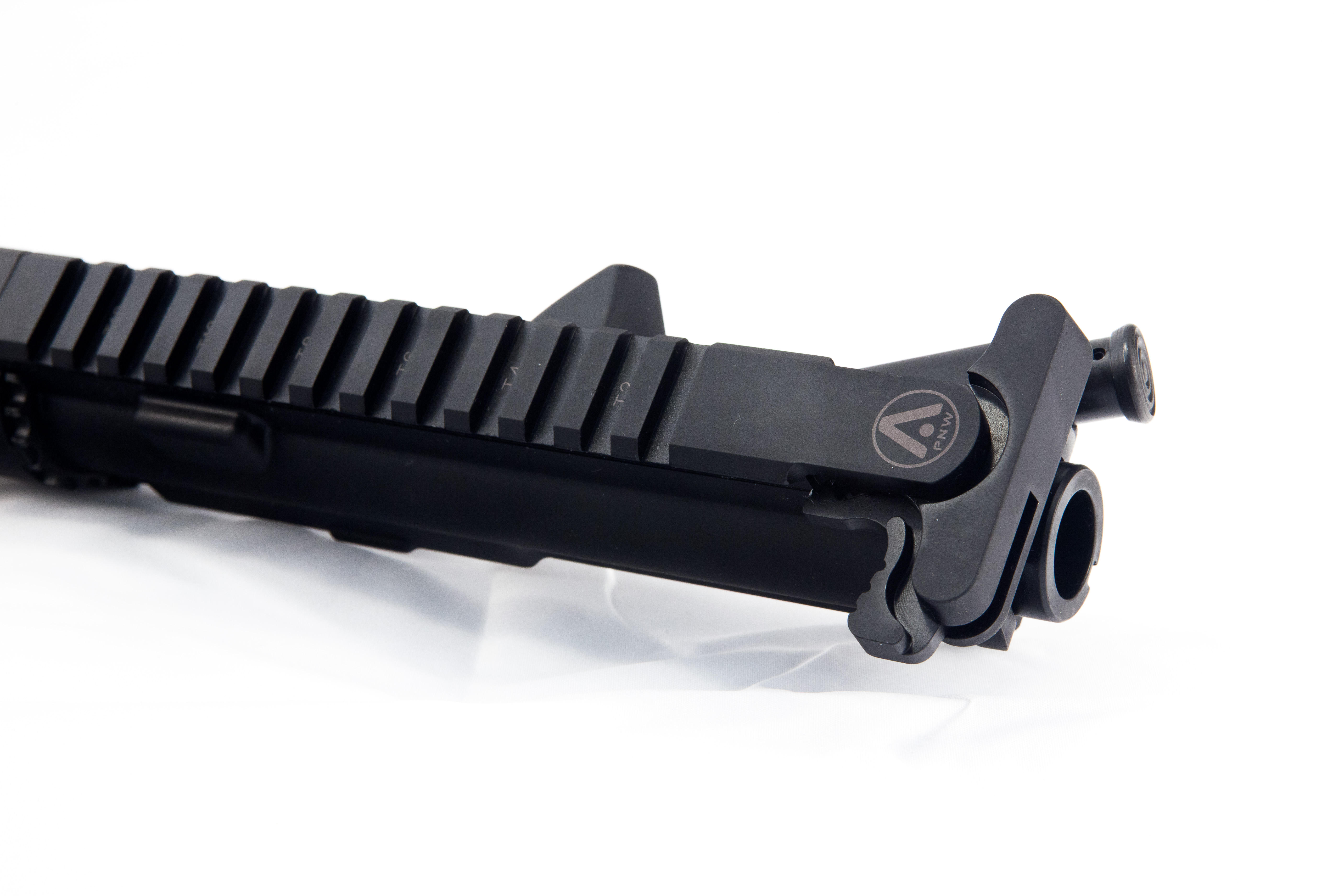 Incredibly light and rugged, the Midwest Industries 15” handguard provides a rock solid lock up and a ton of functionality to our upper. Its modular design includes a monolithic continuous top rail with MIL-STD 1913 Rails (T-Marked for accessory location) and three rail sections as well as five anti-rotation QD socket locations for sling swivels. Type 3 hard coat anodized for a lifetime of service. 16” Chrome Moly Barrel The foundation for precision with any rifle begins with the barrel. Our 16” 4150 Chrome Moly Barrel is MIL-SPEC phosphate coated, has a 1:7 twist, 5/8×24 TPI, and will provide the level of perfection necessary to produce consistent sub-MOA groups whether you’re on the range or in the boonies.

Designed, Engineered and Manufactured with Pride in America" 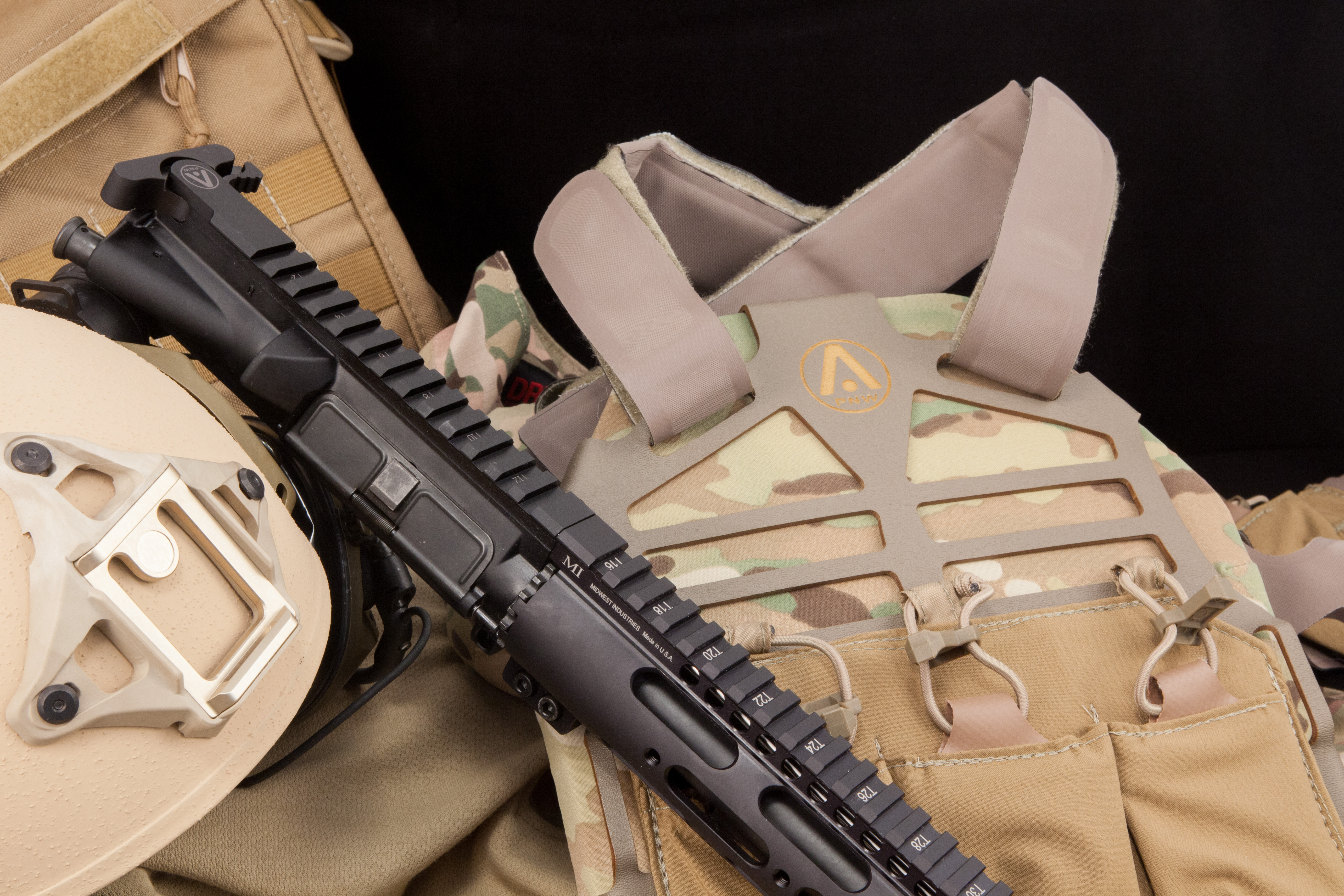 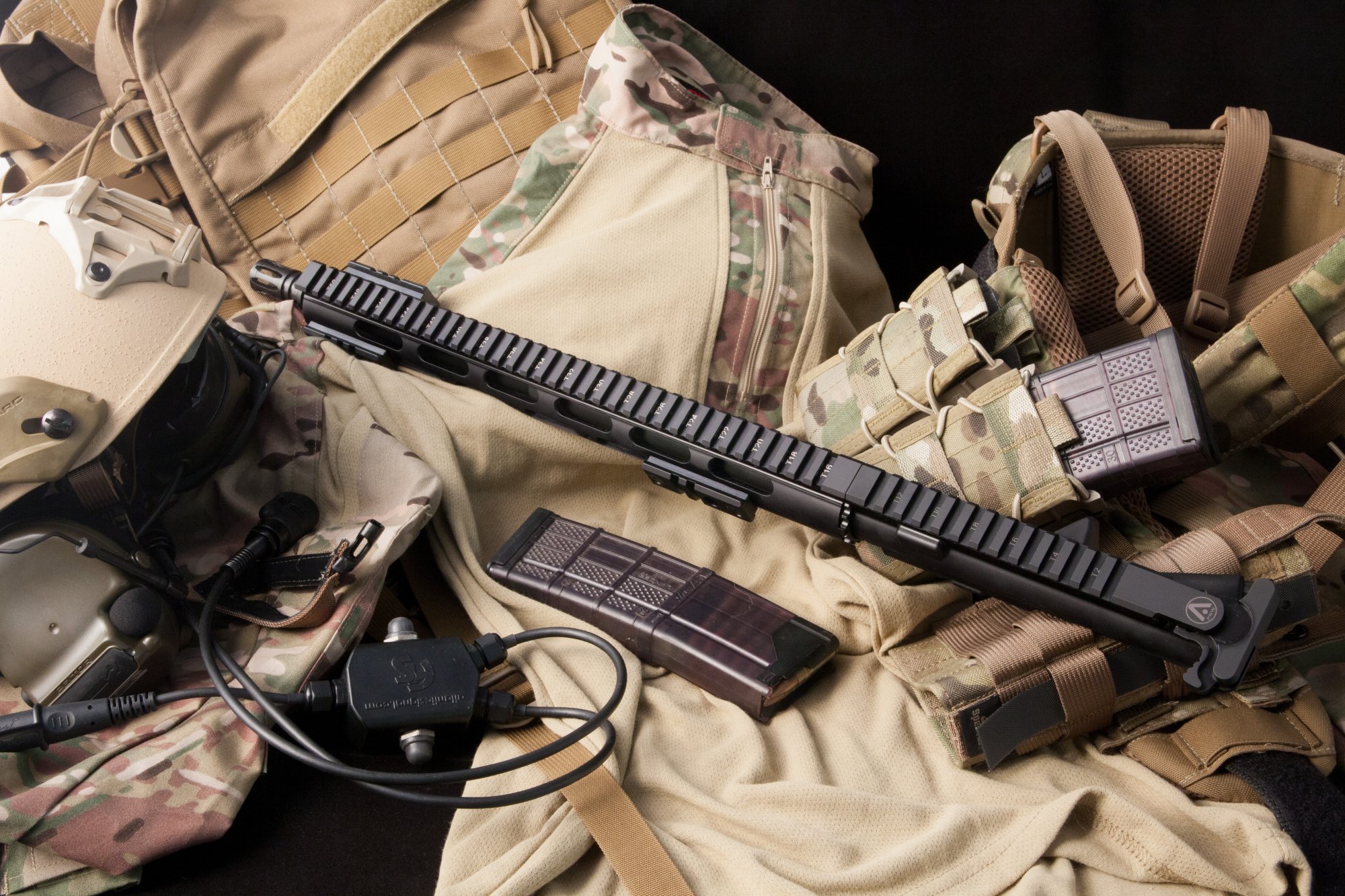 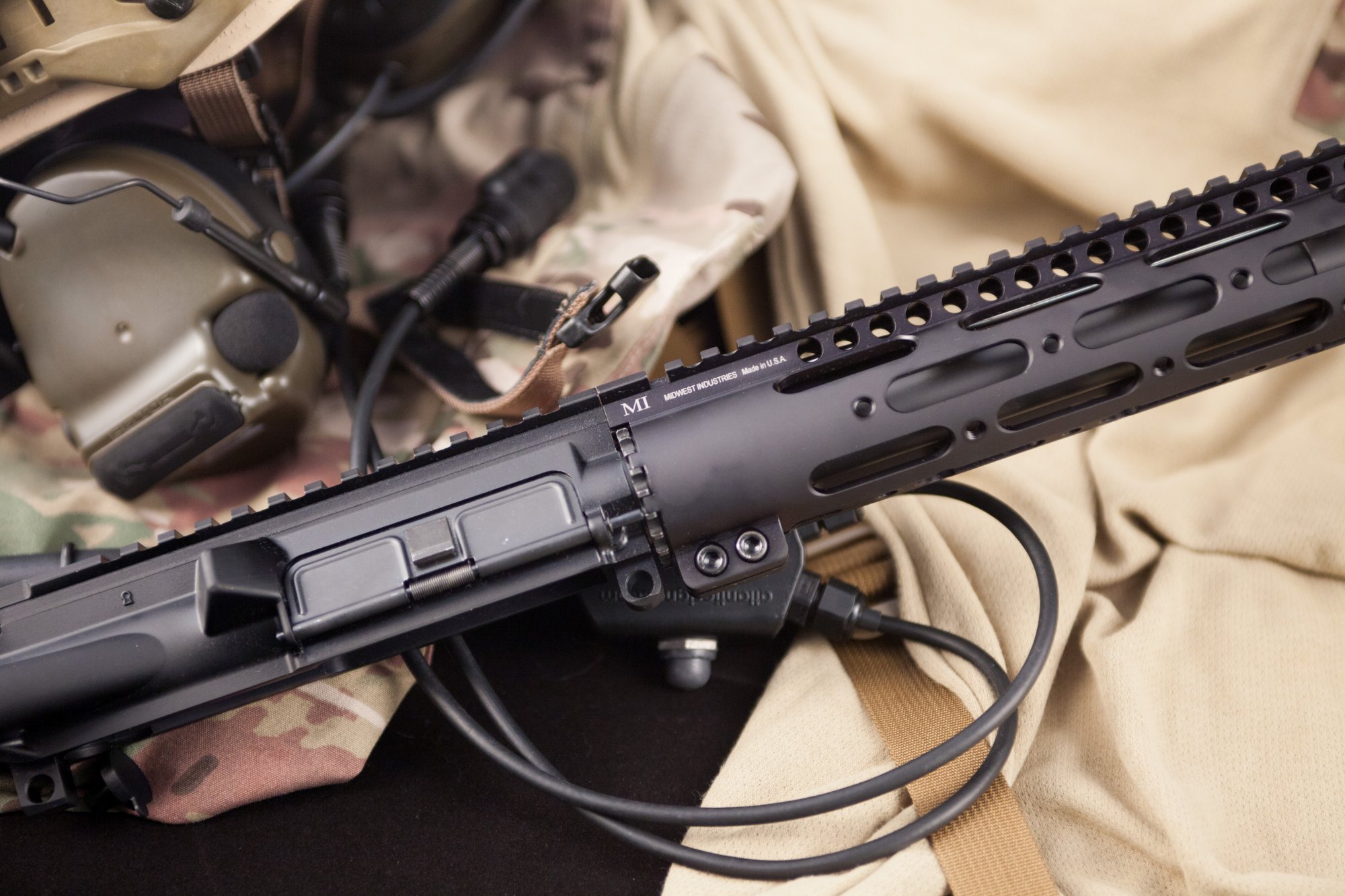 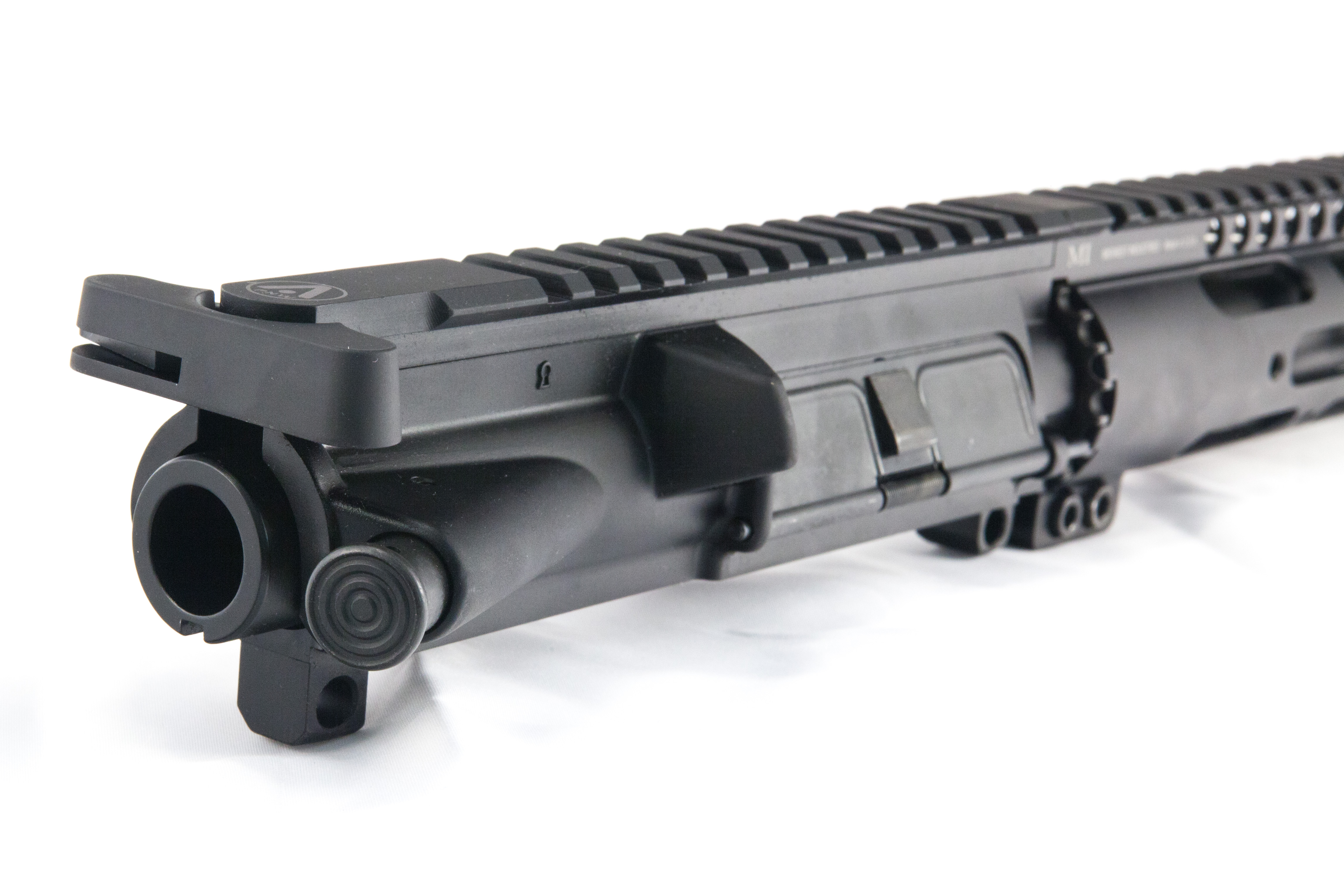 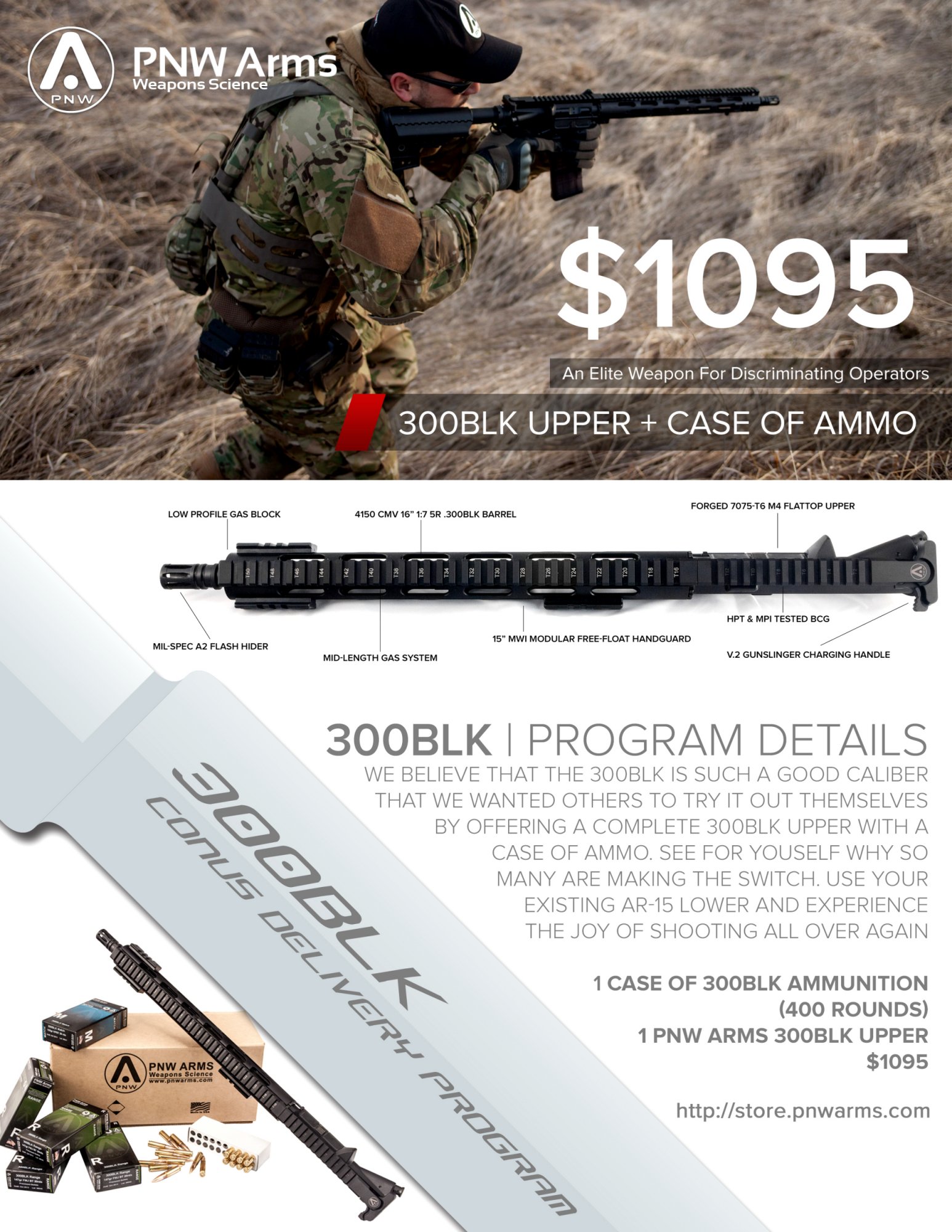