August 16, 2005
Our U.S. Army Rangers at Pointe du Hoc could have really used this thing. The PowerQuick Powered Ascender, a.k.a. PowerQuick personal lifting device, a.k.a. PowerQuick personal lifter, a.k.a. PowerQuick personal climber, if it lives up to it’s billing, will enable Mil/LE operators tasked with assaults over terrain, VBSS/MIO (Visit, Board, Search, and Seizure/Maritime Interception Operations), GOPLATS (Gasoline and Oil Platforms) boarding operations, and any other types of structural assaults–including building assaults during urban warfare operations–to execute those missions more quickly, safely, and easily. In addition, it should allow them to keep at least one hand free (and potentially two hands free) to fire at the enemy while ascending or descending.  Manufactured by Quoin International, Inc. (Carson City, Nevada), PowerQuick is being funded by DARPA DSO (Defense Advanced Research Projects Agency Defense Sciences Office) as a DoD SBIR (Small Business Innovative Research) contract.
The current version of PowerQuick is an… 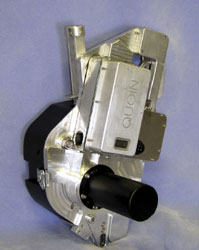 automatic/motorized technical rope access/industrial mountaineering system that can lift 145 kilos (319 lbs) at a speed of 1 meter per second with a 110% lift load factor. This version relies on either a battery-powered (electric-powered) or helicopter-powered motor, and is single-person-operated. Basically the operator shoots a grappling hook over the top (or a harpoon into the side of) a structure and hooks the PowerQuick Powered Ascender/personal lifting device (attached to his harness) to the rope, presses the button, and up he goes towards the objective. It’s that easy. PowerQuick can also allow an operator to escape the structure by lowering him quickly, although DefRev doesn’t yet know the maximum descent rate–but we’ll find out.

According to Michael Jacobsen, president of Quoin International, however, there’s a new version of PowerQuick on the horizon that’s being developed specifically for U.S. military operators–including Special Operations Forces (SOF). It will be 1/3rd smaller than the current version, yet it will lift 100 kilos (220 lbs) at an impressive rate of 3 meters per second. This military version will reportedly utilize a solid propellant power supply, rather than battery/electric power.
Industrial Mountaineering/Technical Rope Access is a relatively recent technique started in Russia that applies adapted mountaineering and caving techniques to scaling commercial buildings/construction sites. Quoin International basically took this technique and added some old-fashioned American ingenuity and laziness, and motorized it. When I say “laziness”, I mean the good kind of lazy–the kind that leads to innovation–i.e. where we invent devices that make our lives easier by enabling us to acomplish the same task in less time, with less work. It’s a fine American tradition, and Quoin International is now a part of that tradition. The bottom line is, the PowerQuick Powered Ascender, in either it’s current form or developmental militarized version, will allow Mil/LE operators to conduct structural assaults against enemy forces or criminals with greater speed, safety, and ease. An additional benefit is the more energy military Spec-Operators (as an example) save while scaling a wall, ship, or cliff, the better they will be able to perform once they get up and over it. 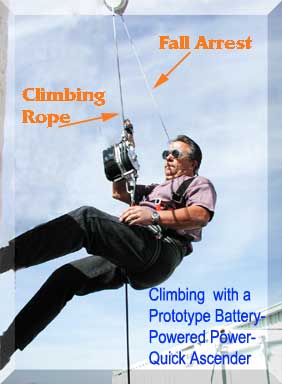 If you’d like to find out more about the PowerQuick Powered Ascender, DefRev suggests that you contact Quoin International, Inc. by phone at 775-882-8100, or via email at [email protected].
Bonanza Products, Inc. is a Quoin International subsidiary company, and they have some good info on the device on their website. They can also probably answer any questions you may have about the product. You can reach Bonanza Products Inc. by phone at 775-882-8100, by fax at 775-882-8158, and by email at [email protected]nanzaproducts.com.
DefenseReview would like to thank BaldGuy007 for giving us the heads-up on a NewScientist.com article that was just published on PowerQuick, titled Scale buildings in a single bound.  His heads-up provided the impetus for us to publish this story.
Gizmodo.com also has a blurb on the PowerQuick Powered Ascender titled PowerQuick: Here Comes the Spider-Man.
Click here to read engadget.com’s blurb on PowerQuick, titled PowerQuick personal lifting device allows people to quickly scale buildings.
Tactical Rappelling Schools:
East Coast:
The Vertical Option, run by tactical rappel instructor Tom Foster, is located in Orlando, Florida. Mr. Foster can be contacted by phone at 407-432-0114, or via email at [email protected].
Tactical Rappel Instruction, located in Brevard County, Florida, is owned and operated by Tom Young (a.k.a. Thomas Young). You can reach Tom by phone at 321-255-2648, or by email at [email protected].
West Coast:
If you’re on the West Coast, S.T.T.U. (Specialized Tactical Training Unit), run by Mark Lonsdale, also offers a Tactical Rappel Program. You can contact Mr. Lonsdale by email at [email protected]. 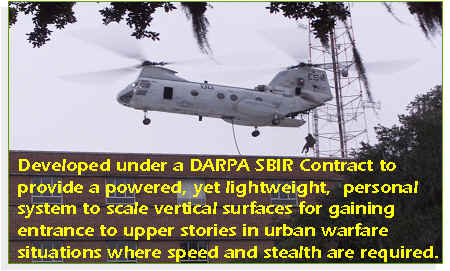 Rappelling Equipment:
BlueWater Ropes claims to make “the lightest single rope in the world”. You can contact them by phone at 770-834-7515, by fax at 770-836-1530, and by email at [email protected].
Rescue Technology claims to make “the finest selection of technical rope rescue equipment for high angle, confined space, industrial, rope access, and water rescue.” You can contact them by phone at 770-832-9694, or toll free at 800-334-3368. Fax number is 770-832-1676.
Click here to visit Rescue Technology’s alternate website.
PowerQuick Powered Ascender for Tactical Assaults (Structural and Maritime Assault Ops): Wall Scaling Made Easy by David Crane

David Crane started publishing online in 2001. Since that time, governments, military organizations, Special Operators (i.e. professional trigger pullers), agencies, and civilian tactical shooters the world over have come to depend on Defense Review as the authoritative source of news and information on "the latest and greatest" in the field of military defense and tactical technology and hardware, including tactical firearms, ammunition, equipment, gear, and training.
Previous Smith & Wesson M&P Pistol: The Next Evolution in Polymer-Framed Combat Pistols?
Next SIGARMS and Heckler & Koch/HK Defense Win Major Pistol Contracts with DHS