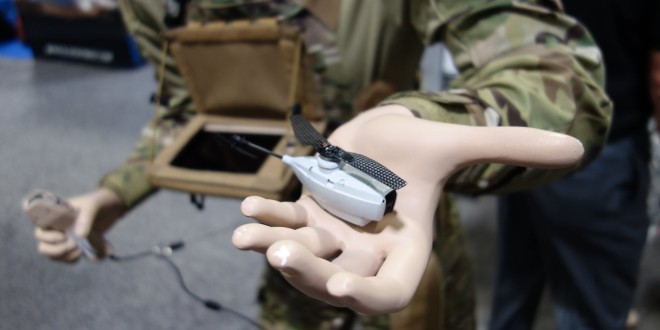 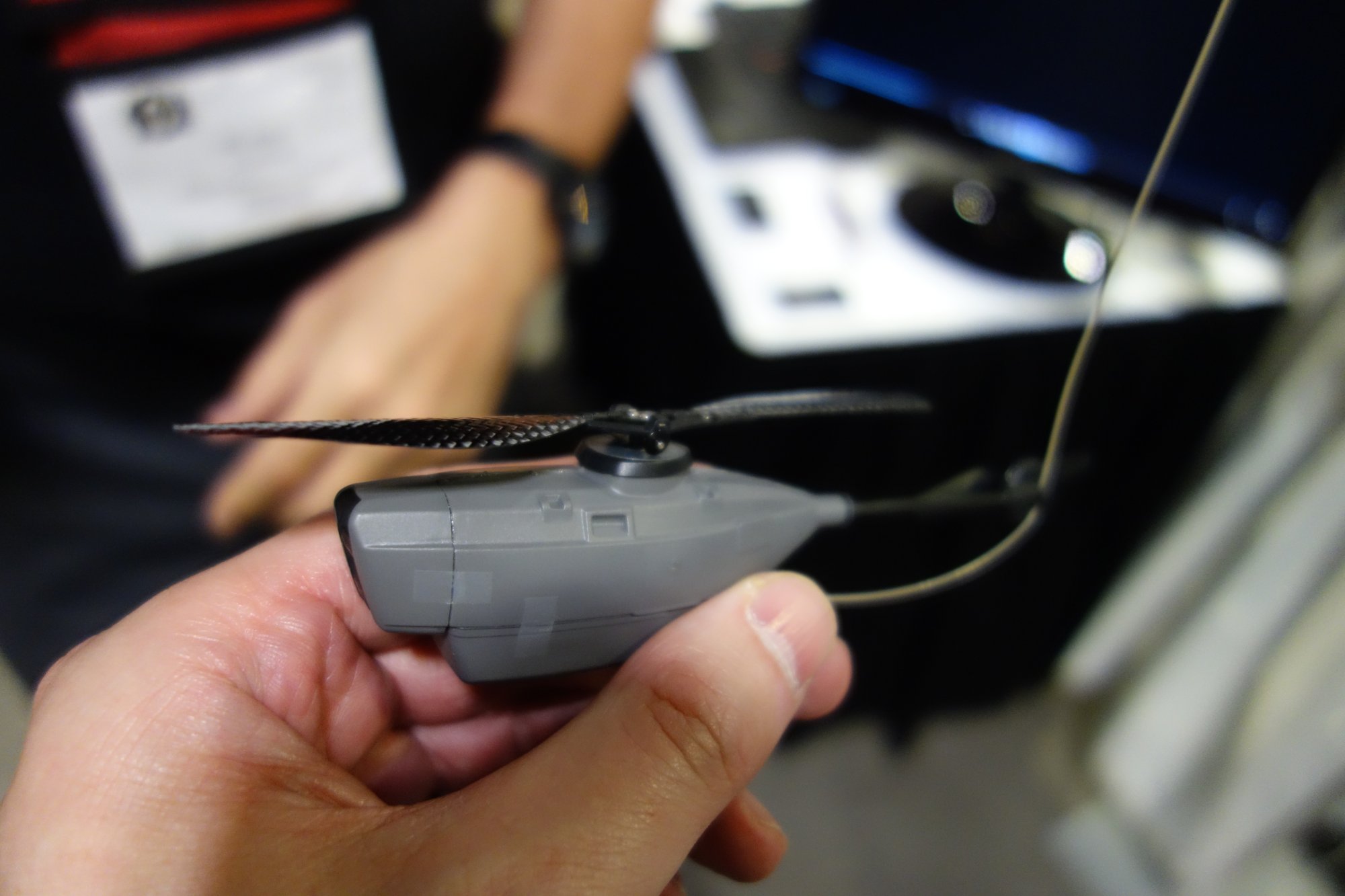 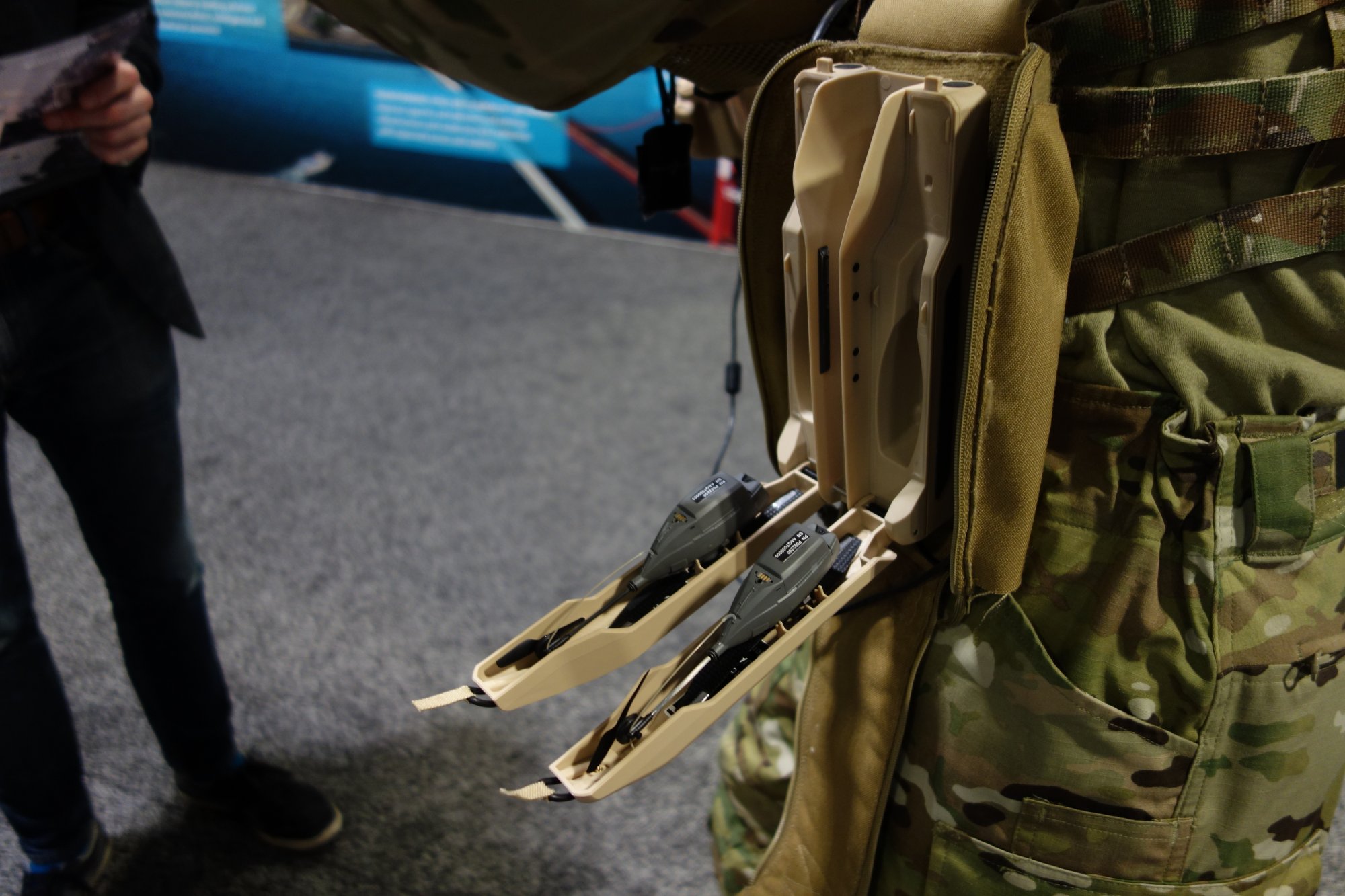 During our discussion with him at SOFIC 2015 (Special Operations Forces Industry Conference 2015), Prox Dynamics General Manager Arne Skjaerpe referred to the PD-100 Black Hornet as a “soldier-borne sensor” (catchy), which is appropriate since an infantry soldier or SOF operator can carry two “birds” in a clamshell polymer holster on his hip and rotate between the two birds as necessary, recharging a spent bird in the clamshell holster by 90% within 30 minutes while the other bird is flying. By the way, you can also just stuff the holster, or “base station” as the company calls it, in your jeans pocket or cargo pants pocket, thus the term “cargo pocket ISR”. 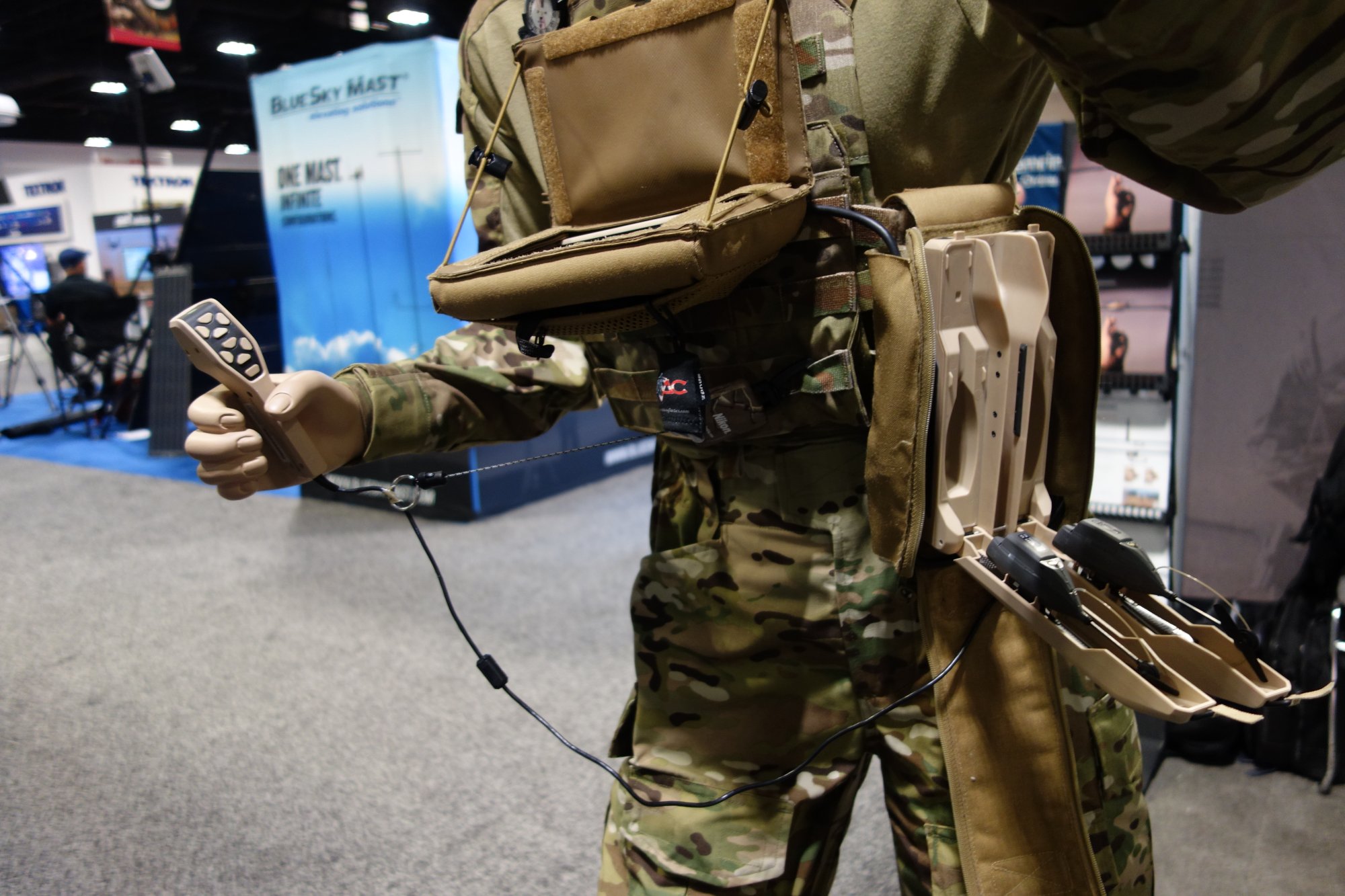 Instead of carrying two daytime birds with daylight cameras for virtually continuous daytime reconnaissance, the operator can opt for a daytime bird and a nighttime bird with a thermal/IR (InfraRed) camera, or two thermal/IR birds for virtually continous nighttime recon and surveillance. DR forgot to ask whether or not a SWIR (Short-Wave InfraRed) camera can be integrated into the Black Hornet PRS nano UAS. While we were walking the floor, we ran into the good people at UTC Aerospace Systems /Sensors Unlimited Products and learned a little bit about their rather impressive SWIR products’ capabilities. So, we’re curious to know just how much they can miniaturize it, and if they can do it to the point that it could be integrated into the Black Hornet nano helo UAS. But we digress. 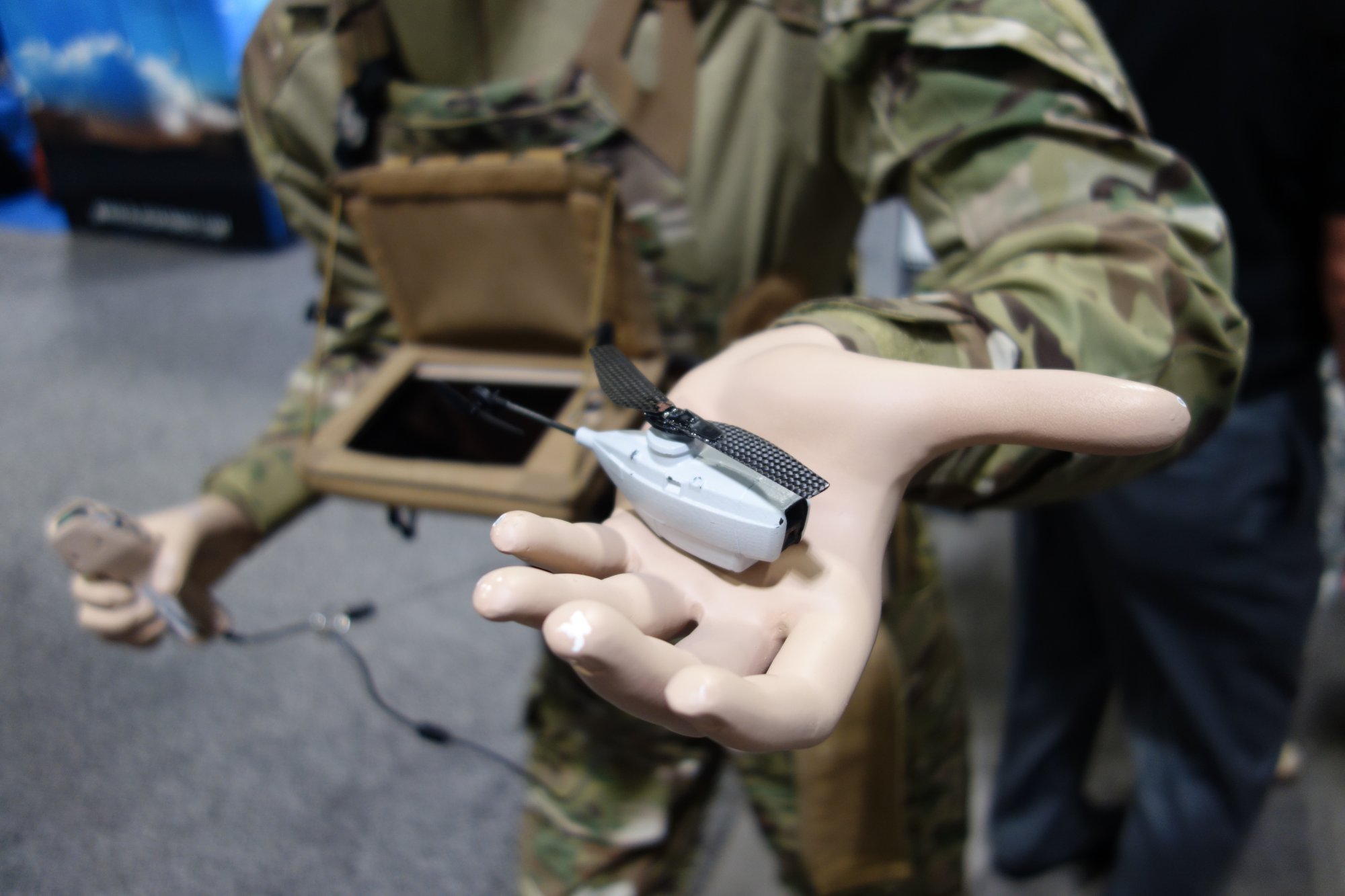 Since the PD-100 Black Hornet’s electrically powered and incredibly small, it’s both virtually silent and invisible in the battespace, particularly at night. Even during the day, the Black Hornet’s grey color scheme will make it very hard to visually detect. If it were detected, the enemy would either have to have a skilled shotgunner or radio jammer (or hacker) to bring it down.
The birds have up to 25 minutes flight time on a full charge, fly at about 5 meters per second, and can achieve a digital datalink beyond 1500 meters line-of-sight. The operator can opt for visual navigation via video, or autonomous GPS navigation, and the bird is capable of proximity surveillance. The birds can shoot and stream live video and still shots, and they can also hover and stare at a target.

Oh, and the whole system weighs only 1.3 kilograms, all in, including the stick-style remote controller, torso-mounted video screen, clamshell holster and two birds. So, it’s pretty light.

Unfortunately, Defense Review didn’t get to see the Black Hornet actually fly in the hall, but you can see it flying in the second/bottom video below.

The following information on the PD-100 Black Hornet PRS comes directly from the proxdynamics website: 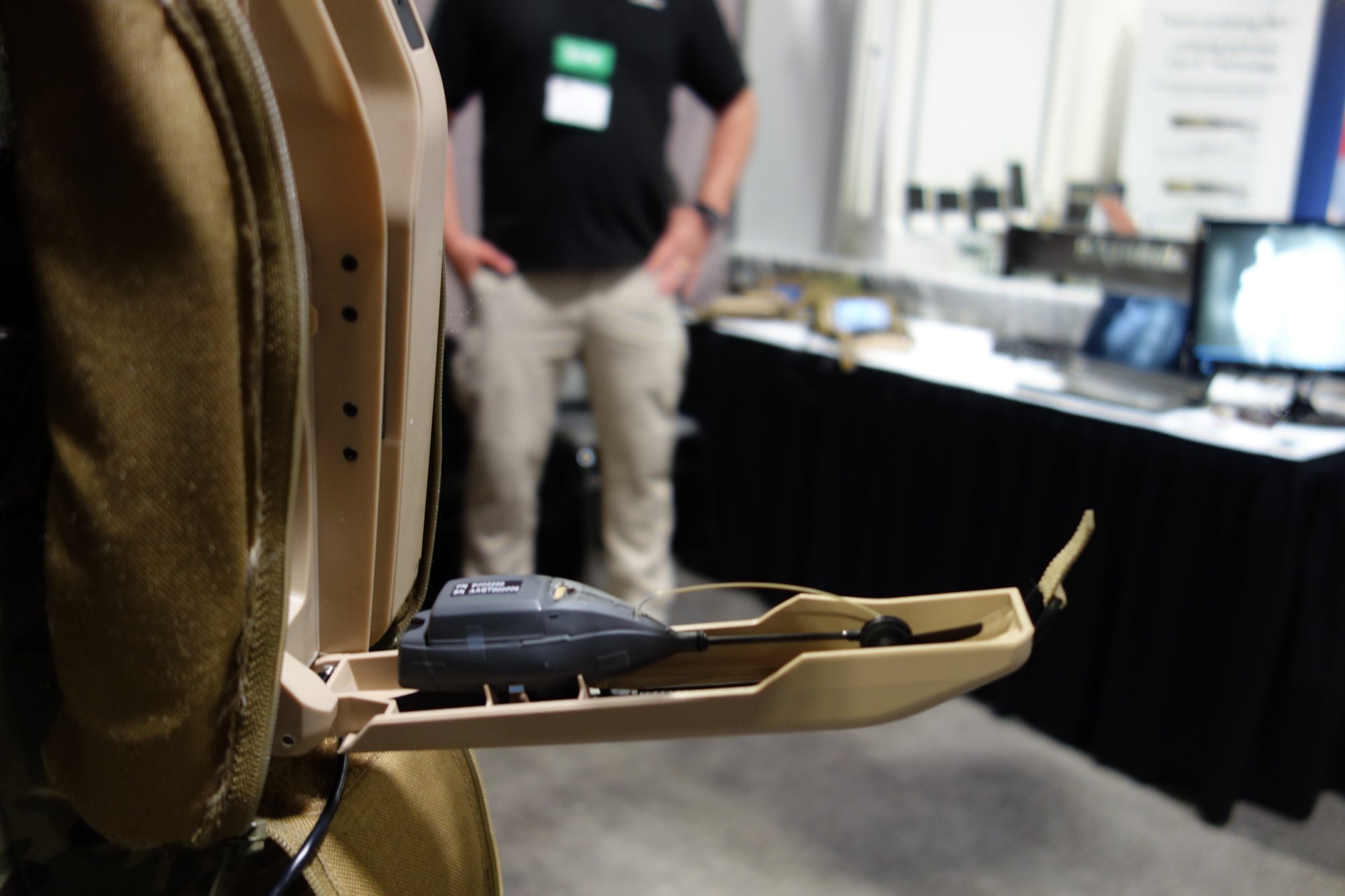 The PD-100 is the first airborne and commercially available Personal Reconnaissance System. It provides end users with a highly mobile sensor system providing an immediate Intelligence, Surveillance and Reconnaissance capability. 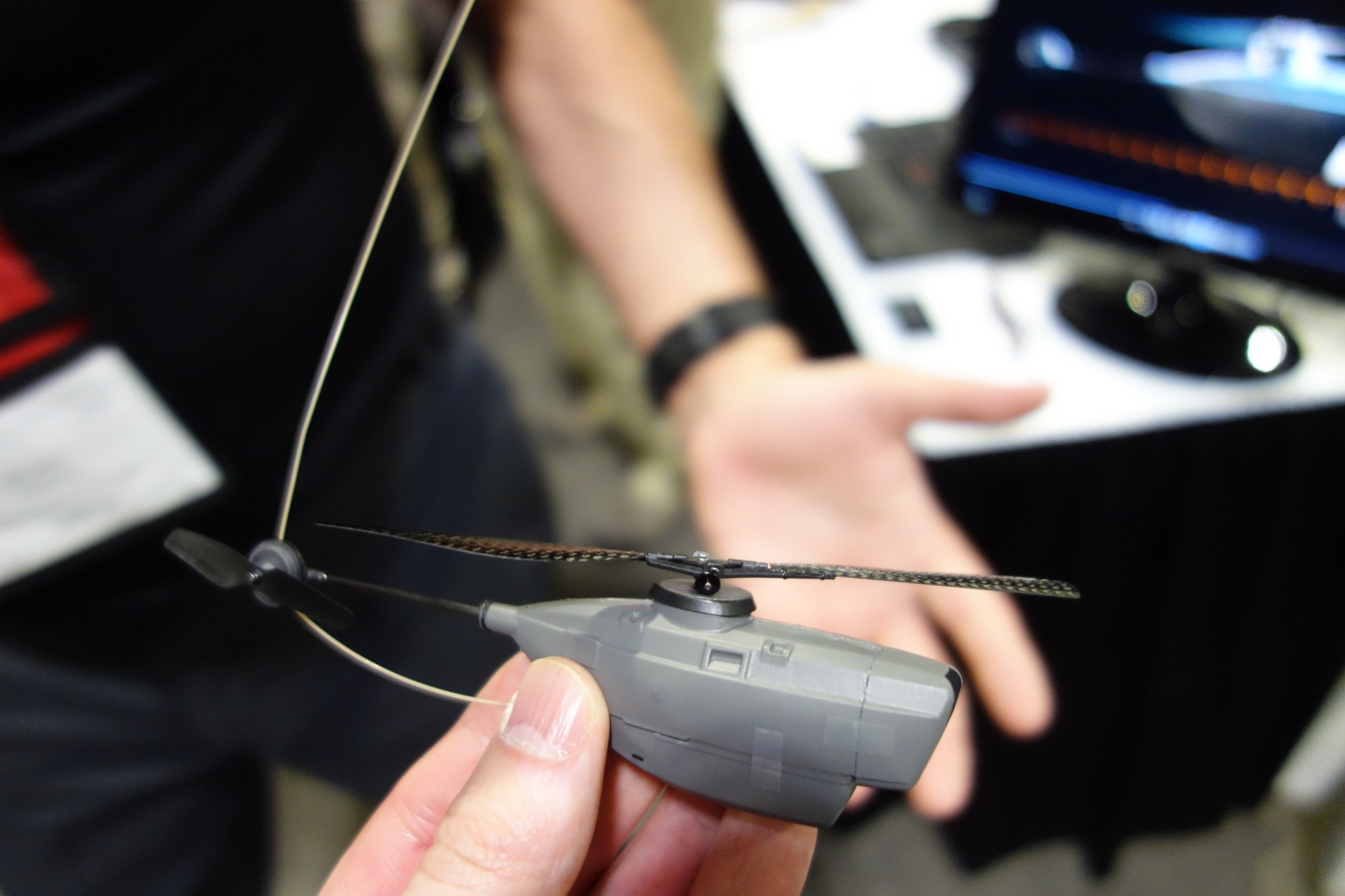 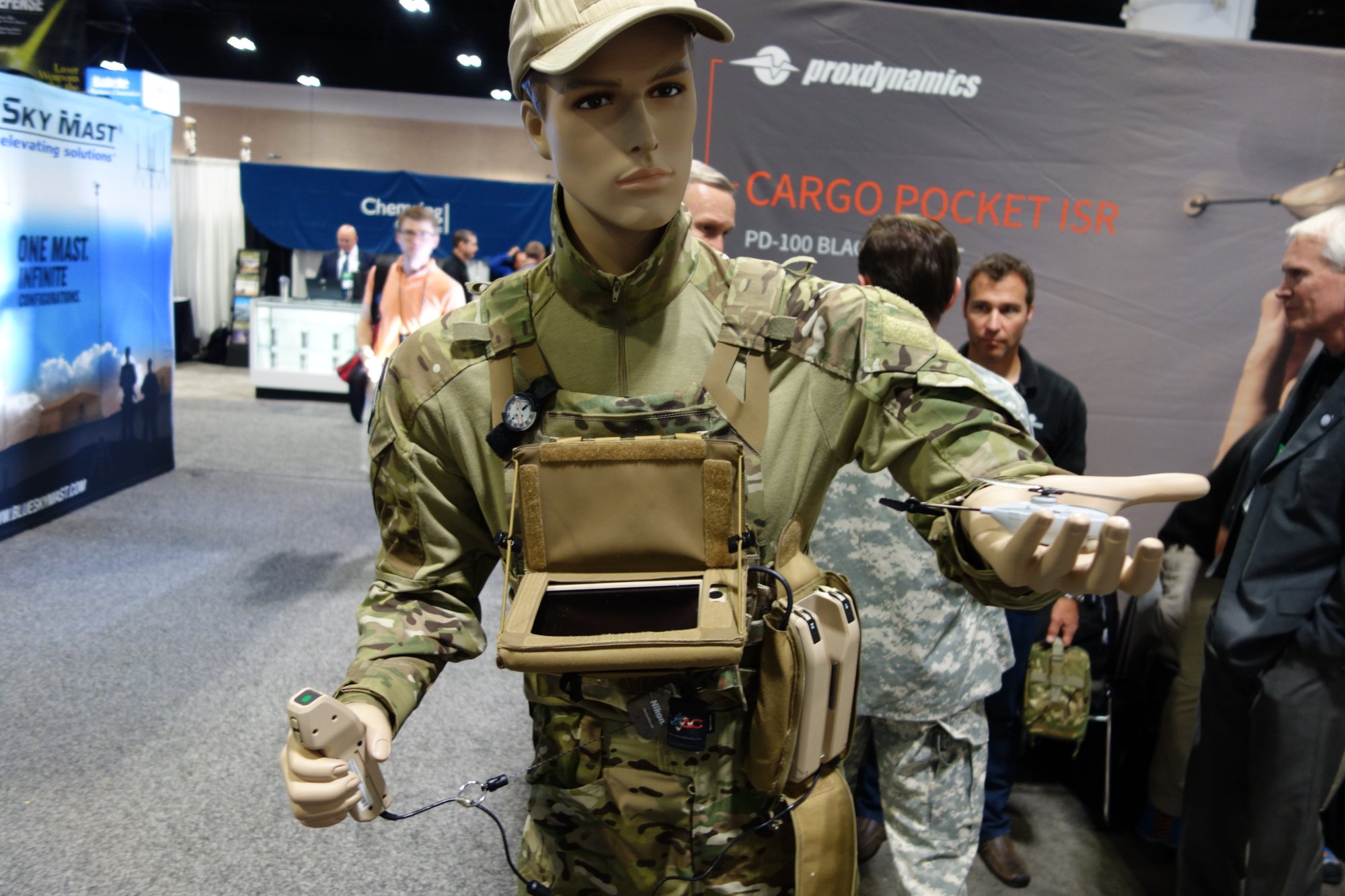 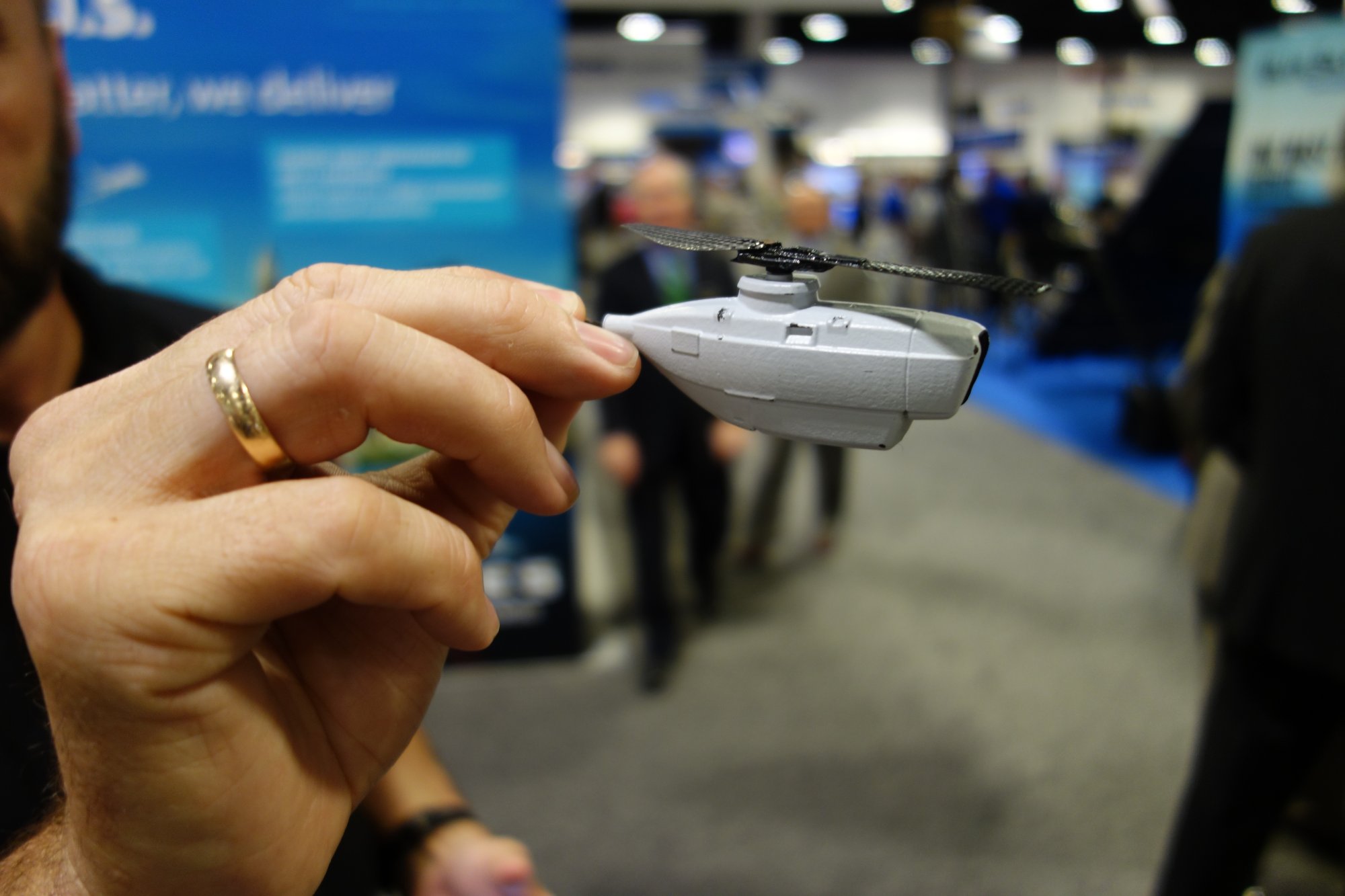 Benefits:
– Transportable – complete system fits inside a pocket
– Ready to fly – airborne within one minute
– Fly it anywhere – in confined areas and outdoors
– Stealth – small and inaudible
– Easy to operate – requires little training and no pilot experience
– Safe – represents no risks to other aircraft or personell
– Affordable – reusable or expendable 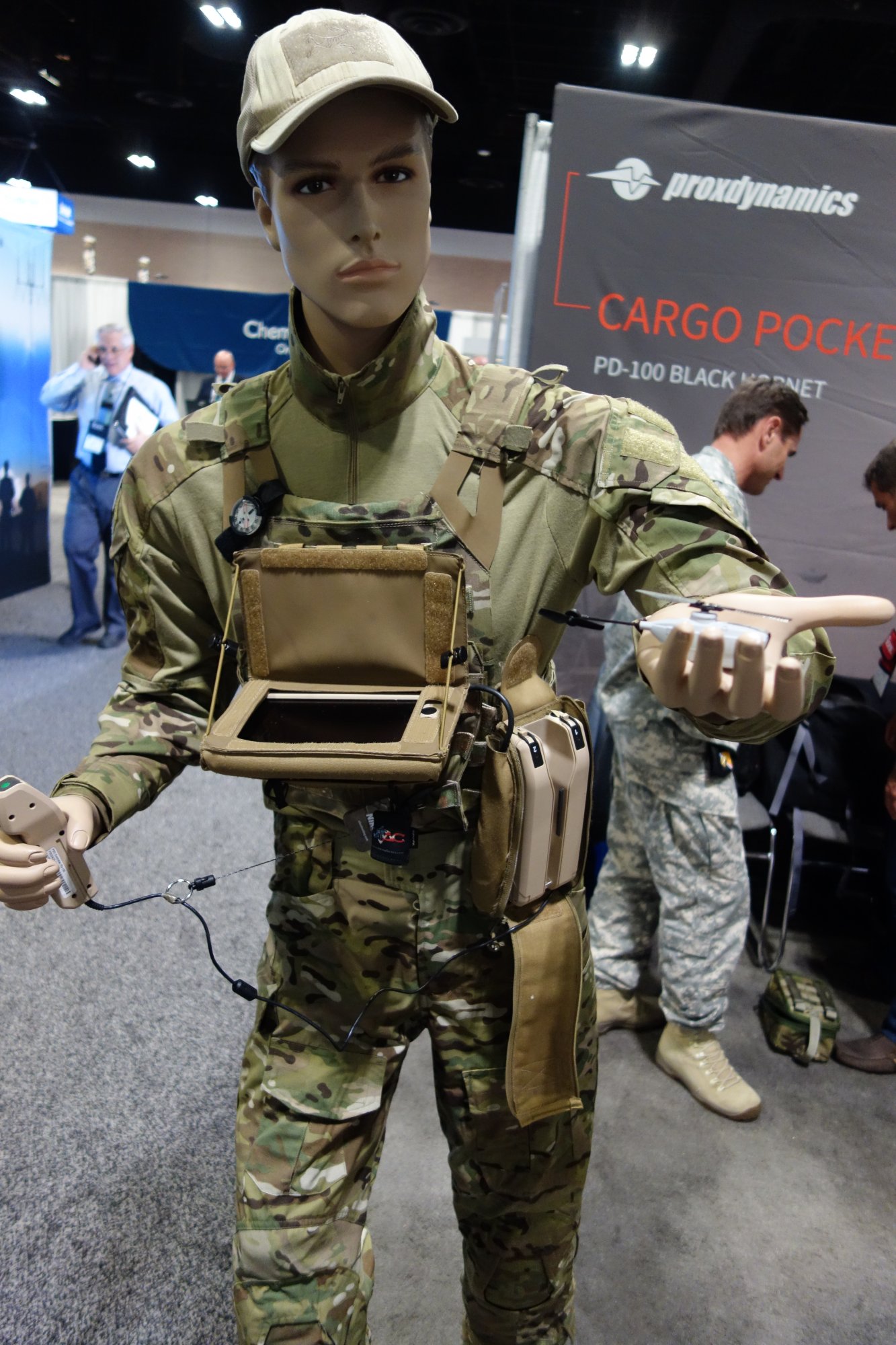 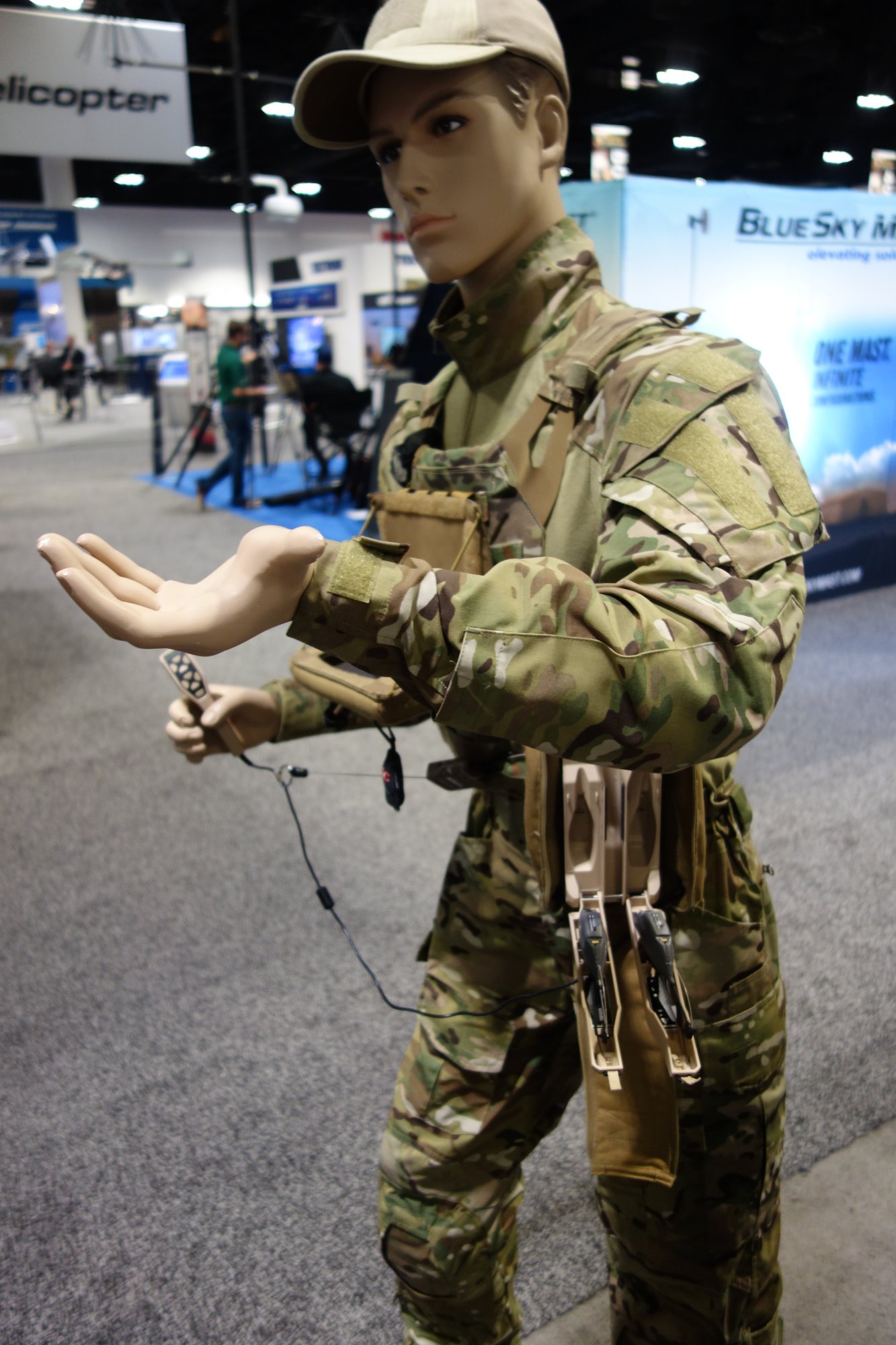 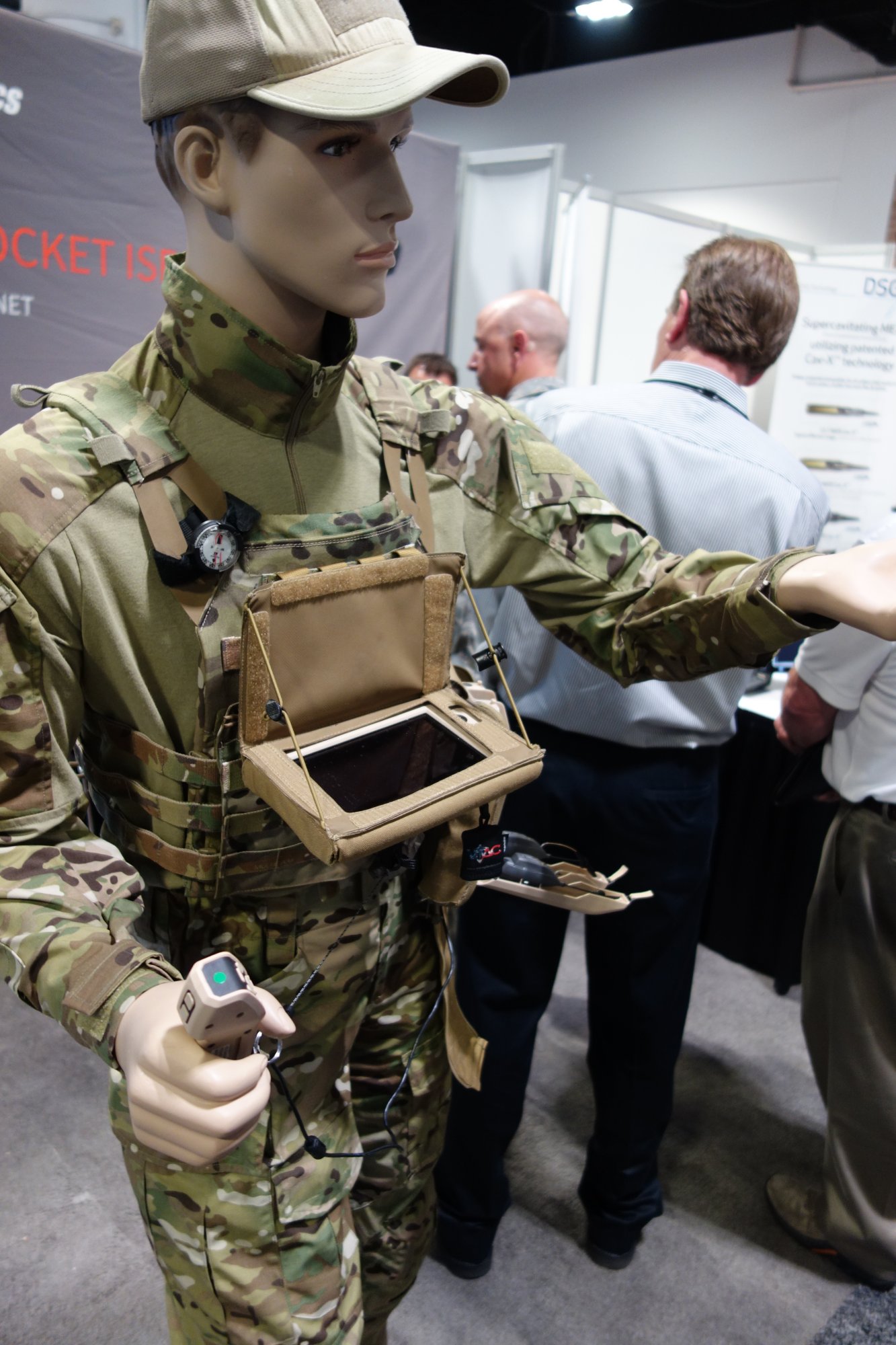 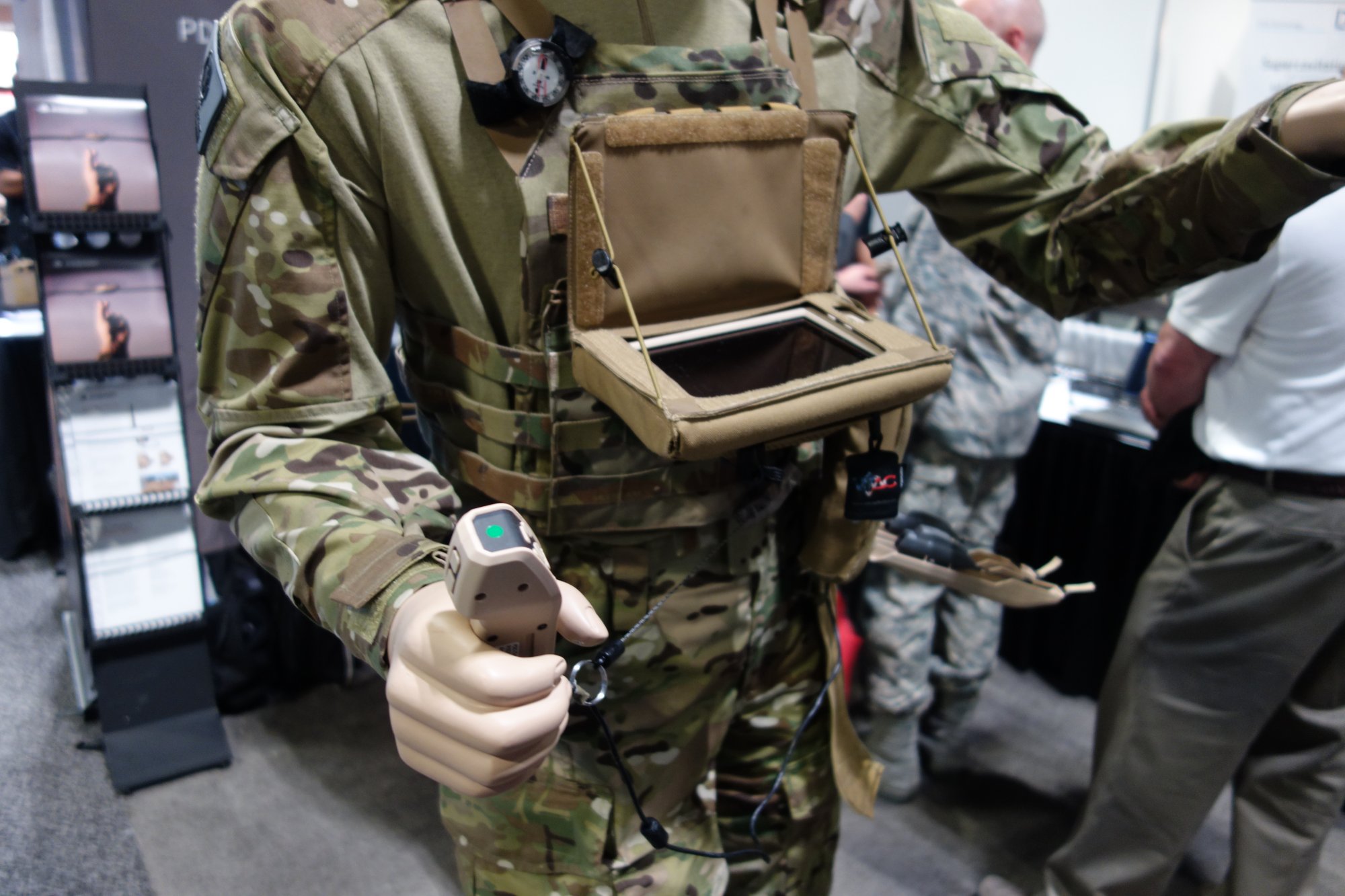 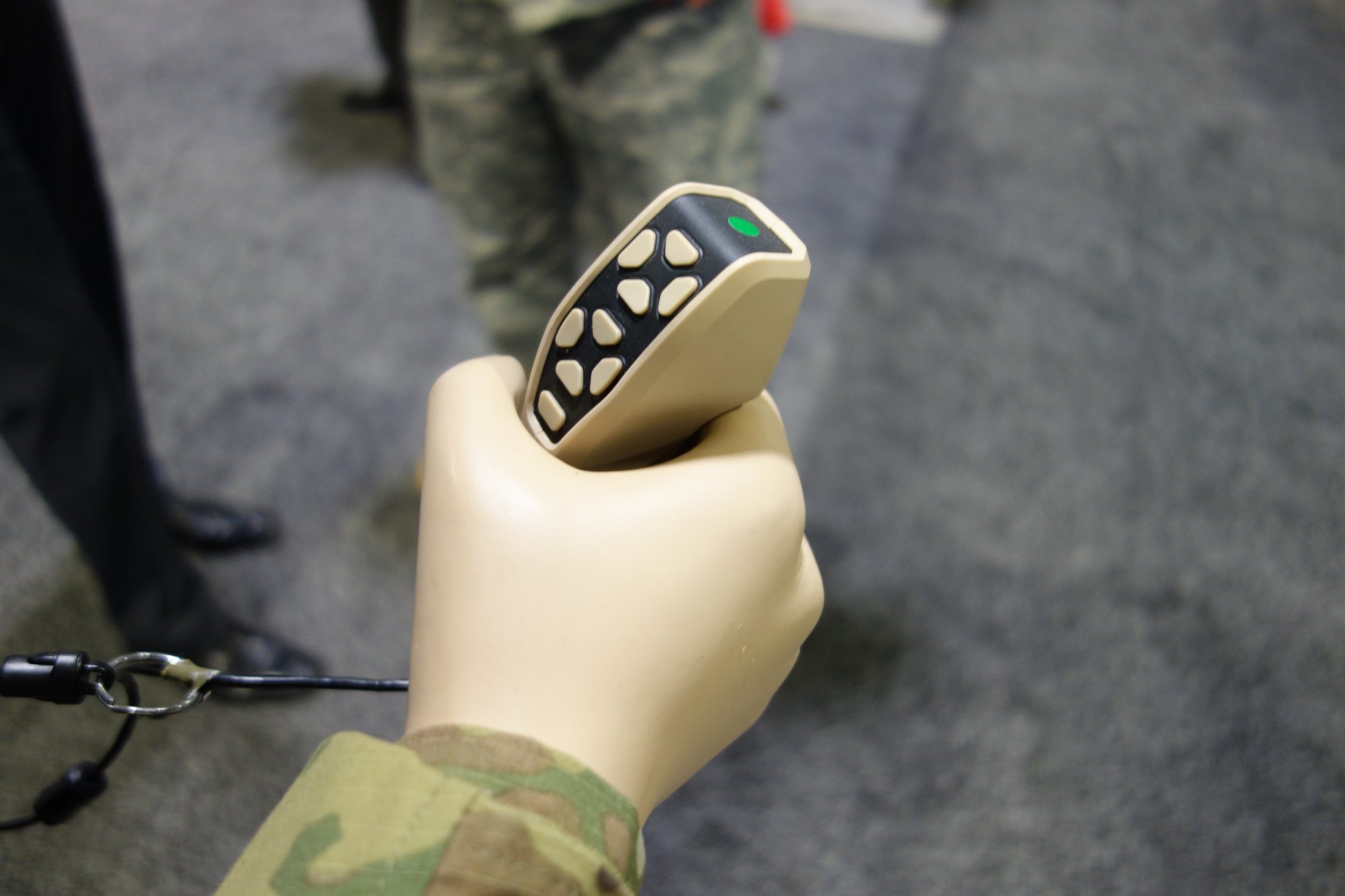 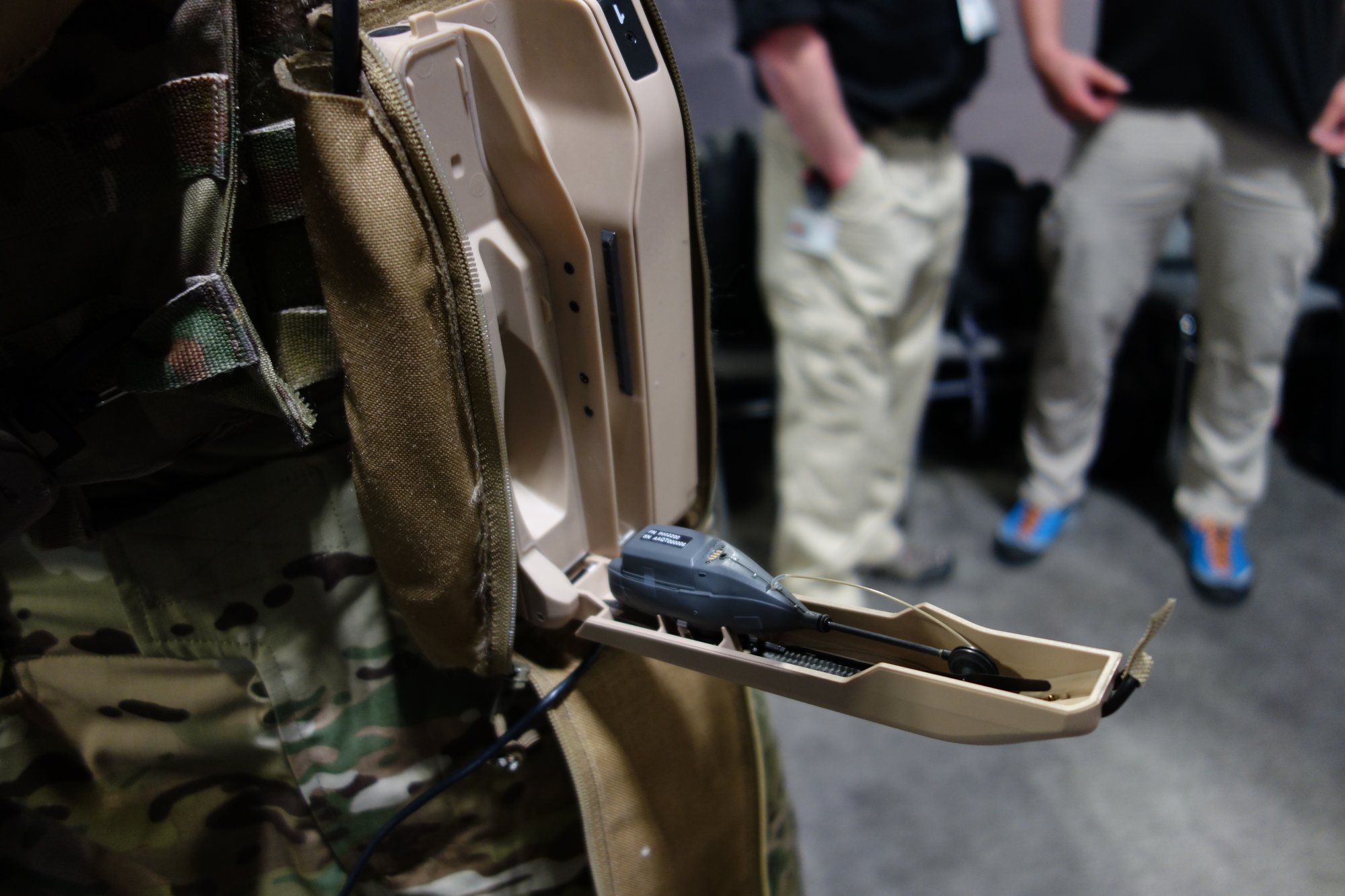 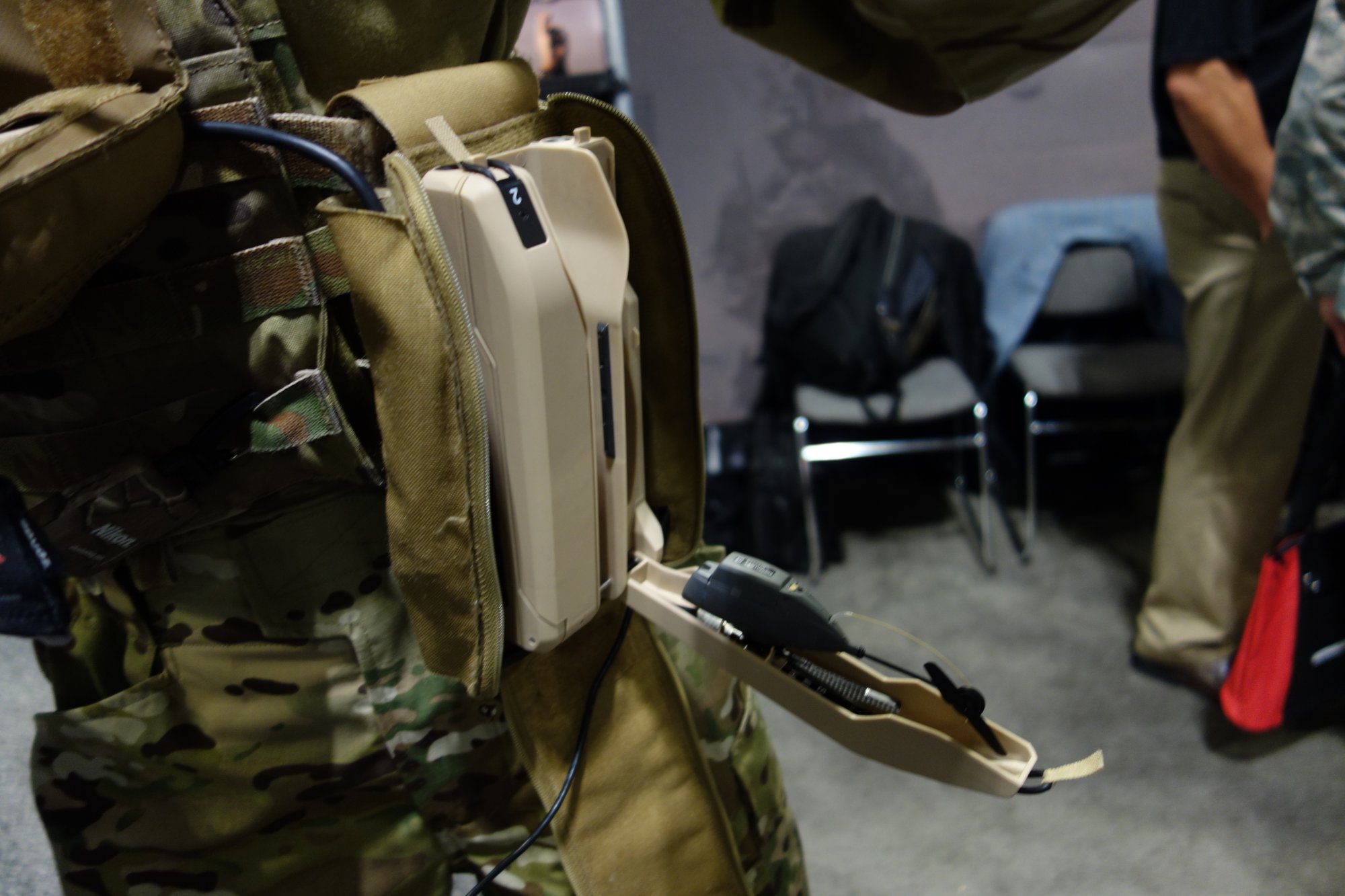 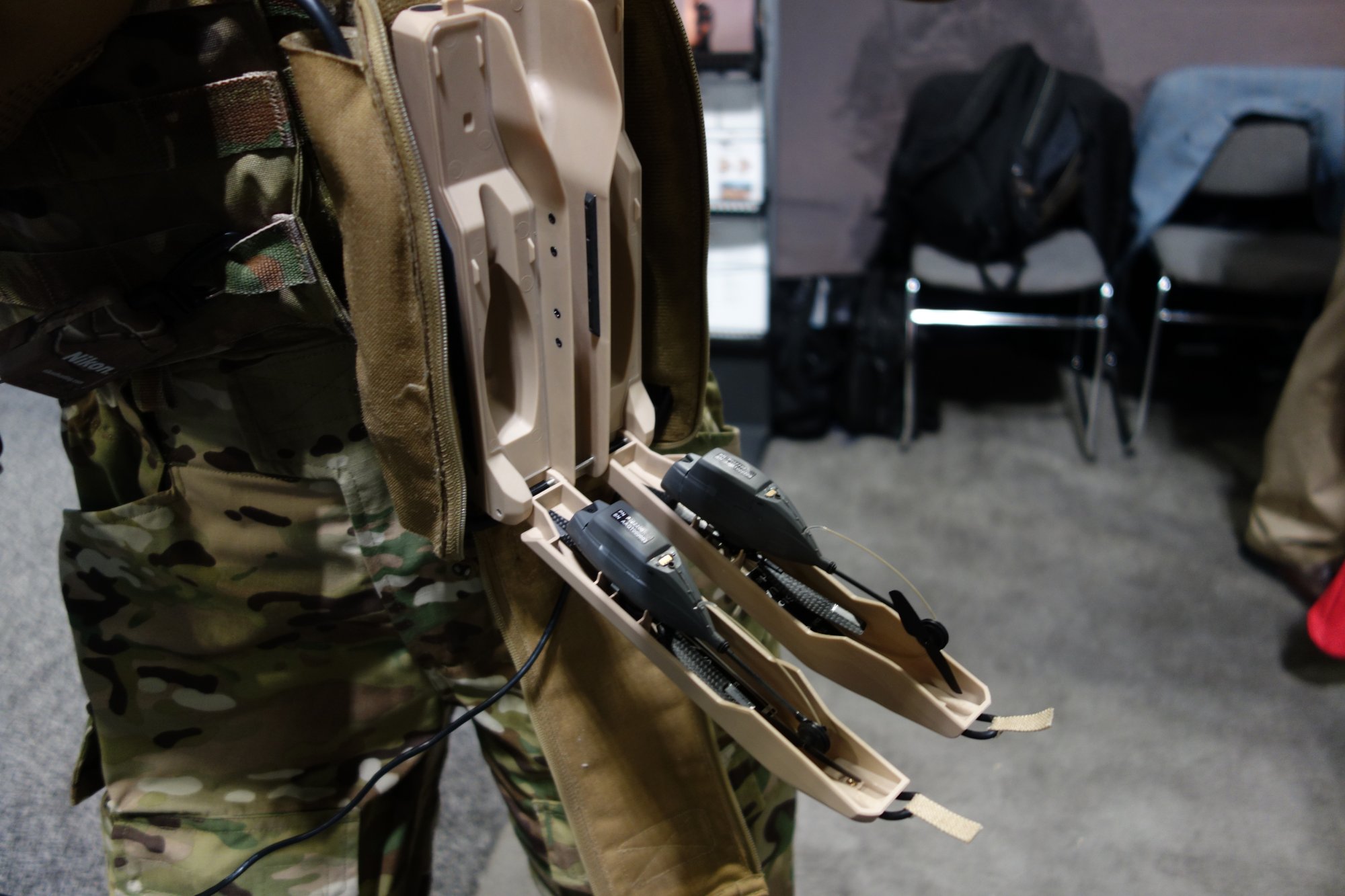 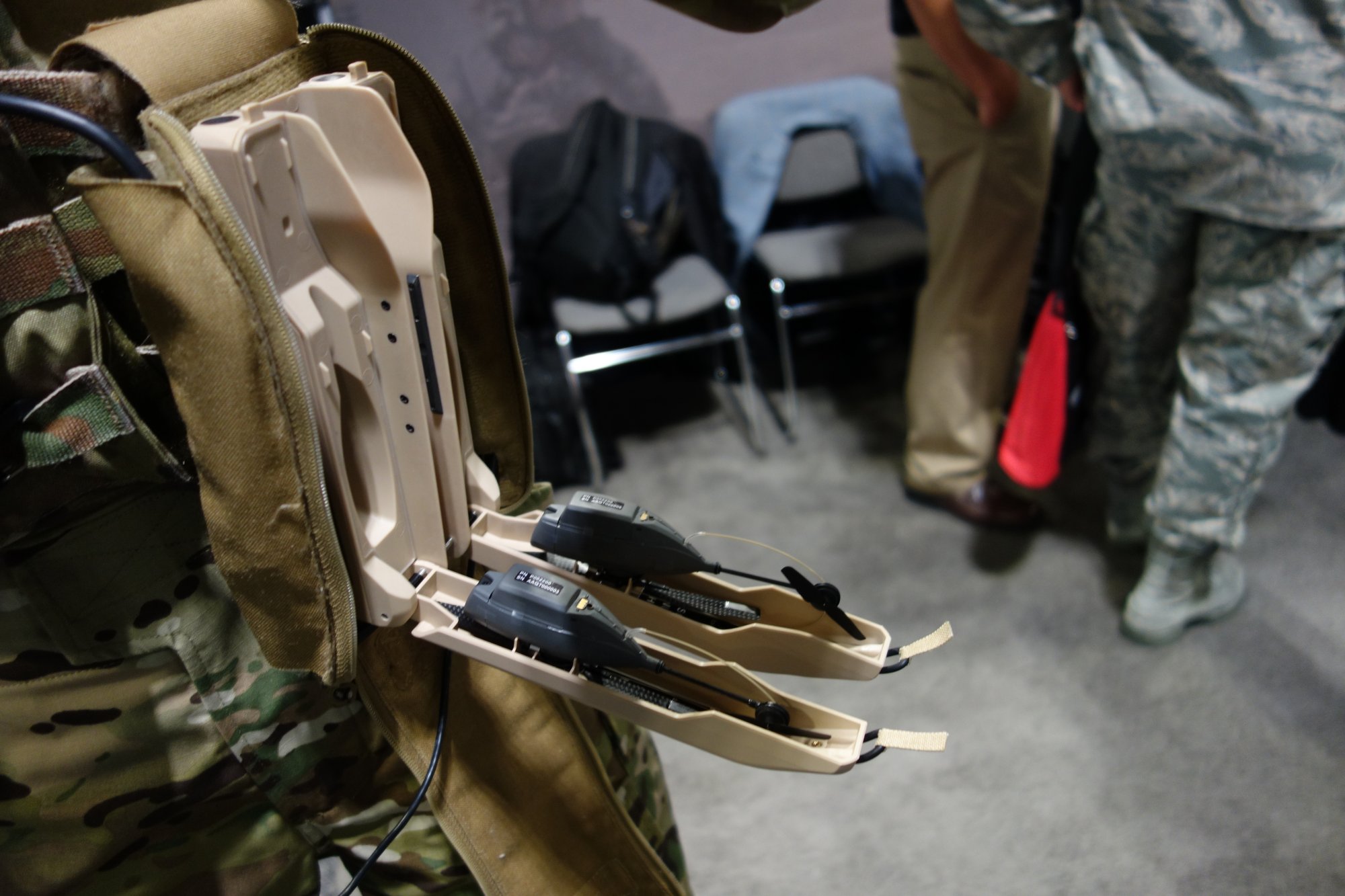 MATBOCK VBSS Robot for Visit, Board Search and Seizure Ops: Maritime Magnetic Marvel Drives Up the Side of the Ship and Sets Your Grapnel Hook! (Video!)

David Crane started publishing online in 2001. Since that time, governments, military organizations, Special Operators (i.e. professional trigger pullers), agencies, and civilian tactical shooters the world over have come to depend on Defense Review as the authoritative source of news and information on "the latest and greatest" in the field of military defense and tactical technology and hardware, including tactical firearms, ammunition, equipment, gear, and training.
Previous MATBOCK VBSS Robot for Visit, Board Search and Seizure Ops: Maritime Magnetic Marvel Drives Up the Side of the Ship and Sets Your Grapnel Hook! (Video!)
Next DSG Technology/Mortars Inc. iMortar Ultra-Lightweight, Manpackable 60mm Mortar and Munitions Weapon System at SOFIC 2015 (Video!)