While I was at SHOT Show (2006), I ran into a gentleman who was presenting information about a "new gun bag". Okay… I have to admit that at first I wasn’t interested. I mean, it’s SHOT Show. Everyone has something new to show and the large majority of them are purely there to make a buck. Very little of it actually answers a real need. Of that, even less answers a need had by the people who work behind guns. After I got a little information my curiosity was up. After I got to actually examine the product, and test it myself (done pretty quickly but thoroughly just the same) I was quite enthusiastic. In today’s world of Active Shooter / Immediate Response training, EVERY COP should have their long rifle in one of these Rapid Deployment Body Armor Bags. This is an innovation we’ve been waiting for.
OK: so here’s the problem/challenge: everybody and their brother (or sister) is… 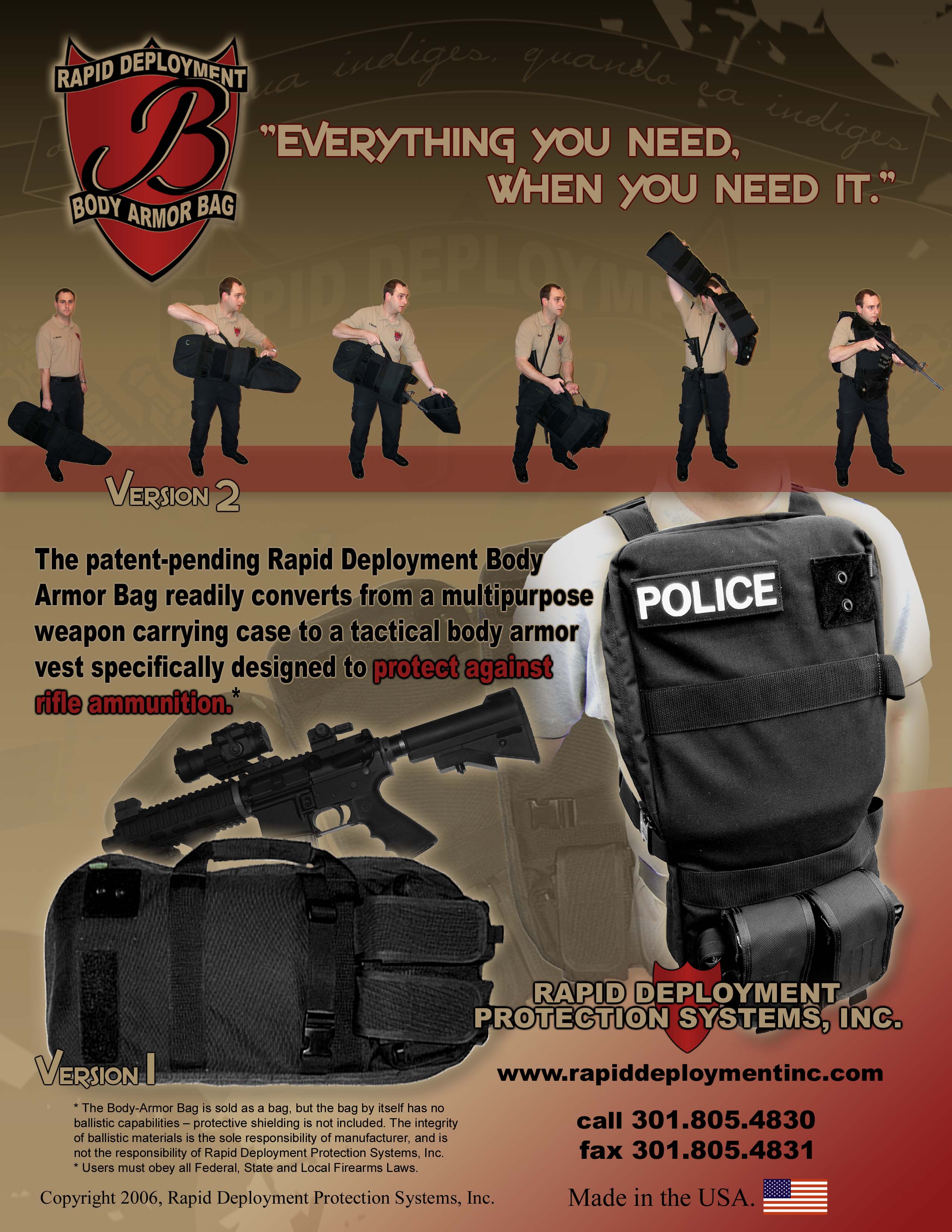 teaching Active Shooter / Immediate Response since the events at Columbine High School where two students killed thirteen people and wounded twenty-three others. Usually this Active Shooter / Immediate Response (ASIR) training involves a classroom section on necessary equipment for entering a building where there is an active shooter. I distinctly remember one of my instructors (when I first took ASIR training) saying that a pistol-caliber long gun is not a rifle, and that a rifle is necessary for such response.

Well, there are several things to immediately consider when adding a "patrol rifle" to an officer’s equipment:
1) Training and qualification with the rifle
2) Transportation and storage of the rifle
3) Adequate armor to stop the ammo fired from the rifle
Oh, yeah – forgot that last one didn’t we? When we consider equipping a patrol officer with a rifle the first two items listed are obvious. It’s that last one we seem to neglect. One of the first rules of body armor is to make sure that it stops your own duty load. Is there any reason why that shouldn’t apply to the patrol rifle?
So, now we find ourselves in the position of needing upgraded body armor when we’re deploying with this rifle. Most cops I know (and work with) wear Level IIIA concealable body armor. Several I know wear their armor in some type of external carrier. I know a few who actually have concealable armor on but keep a plate carrier handy so they can pull it on when the situation mandates.
How cool would this be: how about if we had ONE piece of equipment we could grab out of our trunk when we arrived on the scene of an active shooter? In that ONE piece of equipment would be:
– our rifle
– spare magazines for the rifle
– spare magazines for our sidearm
– flexicuffs
– ready identification (for off duty response)
– soft armor with the option for hard plates
That is exactly what you get with the Rapid Deployment Body Armor Bag. As I said earlier, at first I thought it was a gimic. A soft armor gun bag… okay… sure…
But then I got to play with it, look at it, think about it. True to form, I told the good folks at Rapid Deployment that I wouldn’t write one up unless I could test it myself. Testing was pretty simple. I got one in the mail; loaded it up with my AR 15, four rifle magazines, one pistol magazine and closed it all up. With my wife watching on, sure I was going to make a fool of myself, I opened up the bag, set the gun down (no sling attached) and pulled the bag on over my head just like it was regular body armor. I secured the waist straps and realized that I hadn’t adjusted anything to fit. So, I made the necessary adjustments and then took it back off. Start over…
My wife wasn’t laughing anymore. In less than 30 seconds I went from carrying a rifle bag to wearing body armor that covered my whole torso and most of my lower abdomen / groin. The armor had a POLICE patch on both front and back. I was rifle in hand with four magazines available for reload and two extra magazines for my pistol. I looked at her and told her, "This is the single most innovative piece of equipment I’ve seen in the past ten years if not longer." There are even MOLLE compatible attachment points if you want / need to add on things like a protective mask (gas mask) pouch or other item(s).
After exchanging a couple of emails with the good folks at Rapid Deployment I found that further improvements to increase versatility are already in the works. Rest assured that I’ll be demonstrating this to officers (and Chiefs) at the range this week.
If you check out the Rapid Deployment website, you’ll find a video of the bag being deployed. A few things to note here:
The armor is sold seperately. When you look at prices for the bag, recognize that you are not getting armor plating for that price tag. Armor, especially in the past couple years we’ve been at war, is expensive. It’s sold seperately. Match what armor you purchase to stop the ammo you’re using in your weapons as noted above. Rapid Deployment also sells accessories to help you make your weapon more compatible with their carry armor system. Items such as single point slings, sling mounts, ceramic ballistic plates and rifle magazines are all available through Rapid Deployment.
I highly recommend you check this product out for yourself. After all, we all do need a method for storing and carrying our patrol rifle. I can’t think of a much better way than with a single piece of gear that provides me everything I need to grab and go to respond for ASIR.
BE SAFE!
You can contact Rapid Deployment Protection Systems, Inc. by phone at 301-805-4830, by fax at 301-805-4831, and by email at [email protected]. Ken Blakeley (Kenneth C. Blakeley) is the CEO of Rapid Deployment Protection Systems, Inc. You can contact Mr. Blakeley directly via email at [email protected]
Click here to view the Rapid Deployment Body Armor Bag in action.
Click here to read a post-SHOT Show 2006 press release on the Rapid Deployment Body Armor Bag.
Frank Borelli is the president of Borelli Consulting. You can contact Borelli Consulting by phone/fax at 410-394-1004, and you can contact Mr. Borelli directly via email at [email protected].

Editor’s Note: I (David Crane, Editor, DefenseReview) also got a chance to see the Rapid Deployment Body Armor Bag at SHOT Show 2006, and I was also impressed with it. It’s a pretty trick system. Defense Review has spoken with Ken Blakely, CEO, Rapid Deployment Protection Systems, Inc. on several occasions since SHOT Show 2006, and we plan on conducting a taped phone interview with him very soon. We will try to make this interview available to our readers in audio format.
Rapid Deployment Body Armor Bag: From Rifle Bag to Body Armor in Seconds by David Crane

David Crane started publishing online in 2001. Since that time, governments, military organizations, Special Operators (i.e. professional trigger pullers), agencies, and civilian tactical shooters the world over have come to depend on Defense Review as the authoritative source of news and information on "the latest and greatest" in the field of military defense and tactical technology and hardware, including tactical firearms, ammunition, equipment, gear, and training.
Previous Camelbak Delta-5 Tactical Vest and ST-5 Tactical Pack: Latest Tactical Hydration
Next BHI SOPMOD AK: Modernized AKM/Kalashnikov for SPECOPS and PSD/Security Operators