The following comes from NewScientist.com:

An electronic rifle scope that automatically compensates for unsteady aim and recoil is being developed by US defence contractor Raytheon. Using the sight, snipers and police marksmen would no longer need to manually adjust their sight to account for the slight sideways movement that occurs when they pull the trigger.
The digital sight uses a high-resolution digital camera to…

zoom in on a test target and superimposes a cross-hair in the centre of the image. When the marksman aims and fires, an accelerometer detects the small shock pulse created as the pin strikes the cartridge cap and starts the camera snapping. It captures a rapid series of digital images, which record the motion caused by the gun’s recoil.

An image processor then compares the aim in the original picture with an image of the where the target was hit and electronically moves the cross-hair to compensate for any discrepancy. From then on, anything seen in the scope should, in theory, be a guaranteed bull’s eye.
Click here to read the original article on Raytheon’s electronic rifle scop (a.k.a. "smart scope", from New Scientist Magazine.
Raytheon Developing ‘Smart Scope’ for U.S. Military SPECOPS and LE SWAT Snipers by David Crane

David Crane started publishing online in 2001. Since that time, governments, military organizations, Special Operators (i.e. professional trigger pullers), agencies, and civilian tactical shooters the world over have come to depend on Defense Review as the authoritative source of news and information on "the latest and greatest" in the field of military defense and tactical technology and hardware, including tactical firearms, ammunition, equipment, gear, and training.
Previous Polyshok Impact Reactive Projectile Demo at AFJ Shoot-out 2005 (Video)
Next Raytheon Develops Cellular Bomb Detector / Hijacker 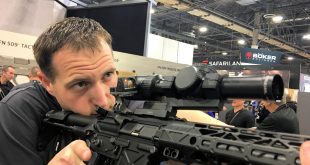