Several weeks ago, DefenseReview had an interesting conversation with Ralph Lermayer, Editor of AR Guns & Hunting and Predator Xtreme magazines about the relationship and crossover between the tactical shooting and hunting communities, particularly as they relate to the Second Amendment (also written as 2nd Amendment) and legislation. During that conversation, I talked about how you shouldn’t need more than one gun in each caliber for both uses, provided your semi-auto-only or select-fire (full-auto) tactical rifle/carbine or sniper rifle (semi-auto or bolt-action) is accurate enough for hunting use. If you can use one gun for both tactical and hunting applications, it’s going to be much easier on your pocket book. Let’s face it, quality firearms are expensive, particularly if they’re custom built. 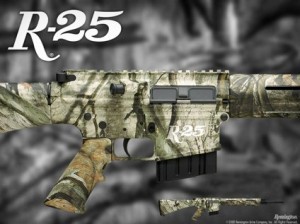 The added bonus using an AR-10, AR-15, or M14/M1A type rifle for hunting is there is no familiarization or retraining required to master a different weapons platform for both tactical and hunting applications, so you can just concentrate on shooting, whether it’s people or animals/wild game. Operations, ergonomics, and controls are exactly the same.

However, when it comes to hunting applications, a multi-caliber tactical/hunting rifle is even better, since you can use it for several different types/sizes of game. The Remington Model R-25 multi-caliber rifle would appear to fit the bill quite nicely. The R-25 is an AR-10-config rifle that allows user to switch between 7.62mm NATO/.308 Win., .243 Win., and 7mm-08 Rem., depending on what type of wild game you want to go after.

The Remington R-25 tactical/hunting rifle features a free-float, button-rifled 20-inch fluted barrel (6 flutes) with a 1:10 twist rate and a recessed crown at the muzzle and a Mil-Std-1913 “Picatinny” top rail on the upper receiver. The R-25’s pistol grip and buttstock are identical to the AR-15/M16 and AR-10 series rifles. R-25-specific magazine capacity is just 4 rounds for all calibers, but the R-25 will accept standard 20-round AR-10 mags, according to a Remington representative we asked about it. The Remington also told us that Remington milled the sides of the R-25’s upper receiver flat in order to reduce OA weapon weight.

Hunting can be a highly-beneficial skill-maintenance activity for military, law enforcement, and PSC/PMC tactical operators, and when they do it, it’s best to do it with the same weapon platform that they use in combat. The Remington R-25 looks like a viable “crossover” (our term) rifle for this purpose.

David Crane started publishing online in 2001. Since that time, governments, military organizations, Special Operators (i.e. professional trigger pullers), agencies, and civilian tactical shooters the world over have come to depend on Defense Review as the authoritative source of news and information on "the latest and greatest" in the field of military defense and tactical technology and hardware, including tactical firearms, ammunition, equipment, gear, and training.
Previous DefenseReview Looking for Combat Videos, Tactical Equipment/Gear Information, and Important News from the Field.
Next FN FNP-45 High-Capacity .45ACP Semi-Auto Combat Pistol: Where does it fit in the tactical .45 pistol race?