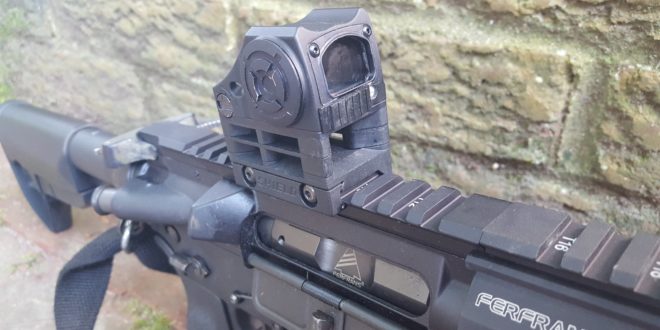 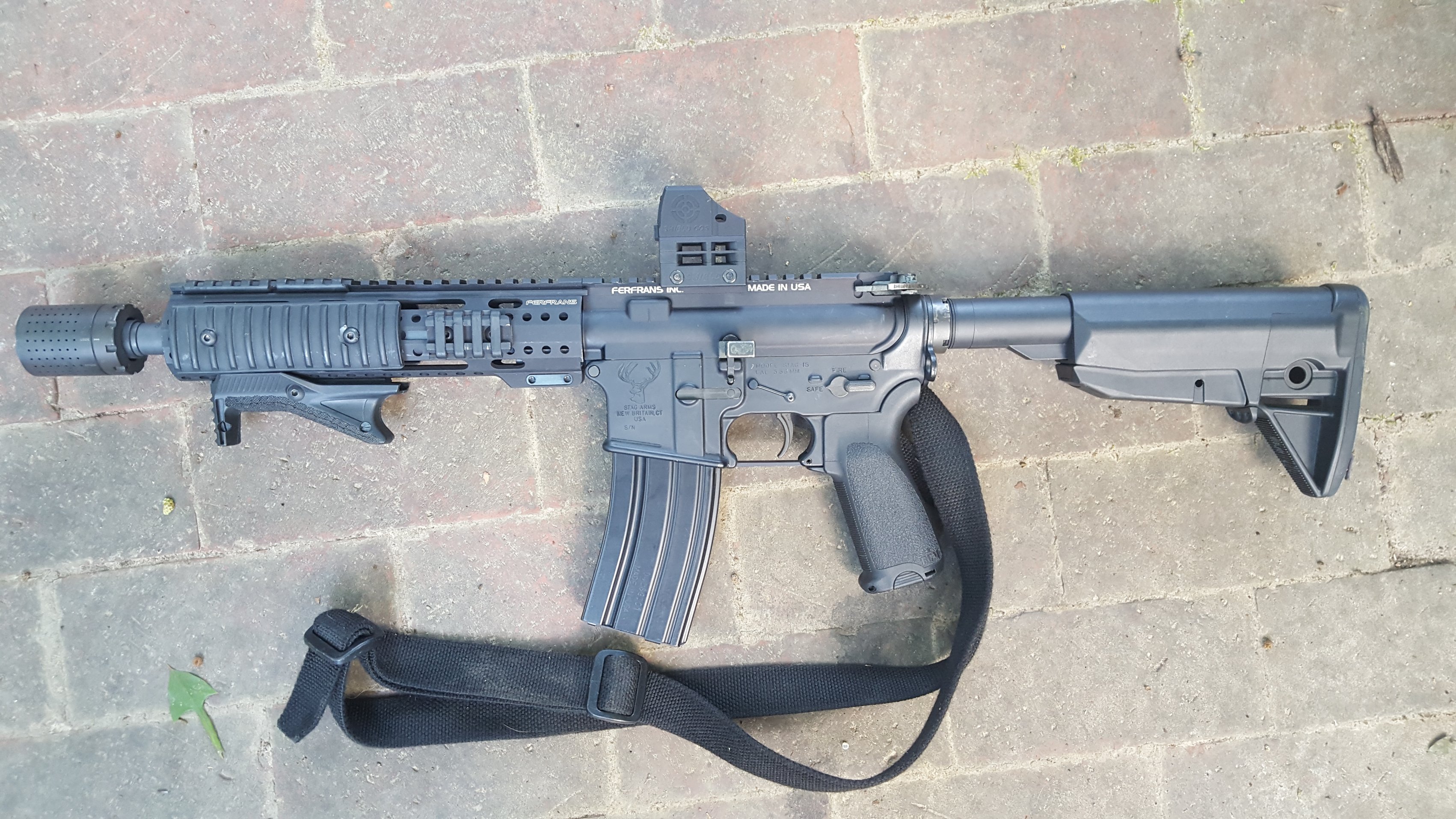 There are so many mini red-dot-sight combat optics out there right now, including relatively new ones like the Shield CQS (Close Quarter Sight), that it can be a bit difficult to choose one. Fortunately, DefenseReview (DR) has DR writer/contributor and chief new-product tester Jeff Gurwitch to assist us with our personal in-house weapons, gear and equipment choices. Anyway, as it happens, Gurwitch recently got a chance to T&E the Shield CQS at the range during a training course, and he’s graciously provided us with his notes on it below (slightly edited for readability and visuals: 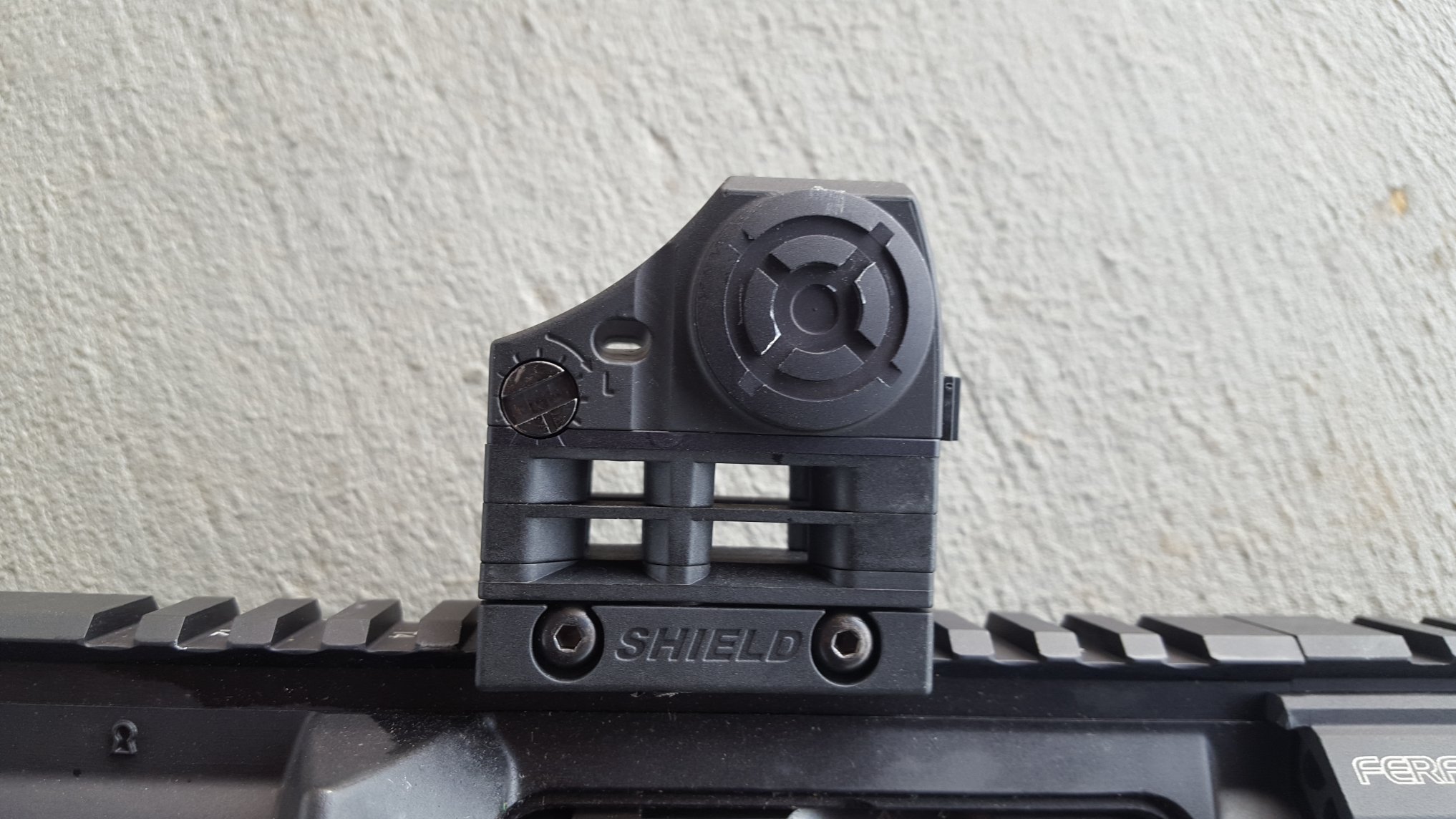 The body of the CQS seems very well built and pretty hard core. I have witnessed both Docter Sights and EOTech MRDS [sights] break (shatter in fact) with very little force. I bet this thing can take a beating.

Zeroing’s a pain in the ass, since does not have solid click adjustments. 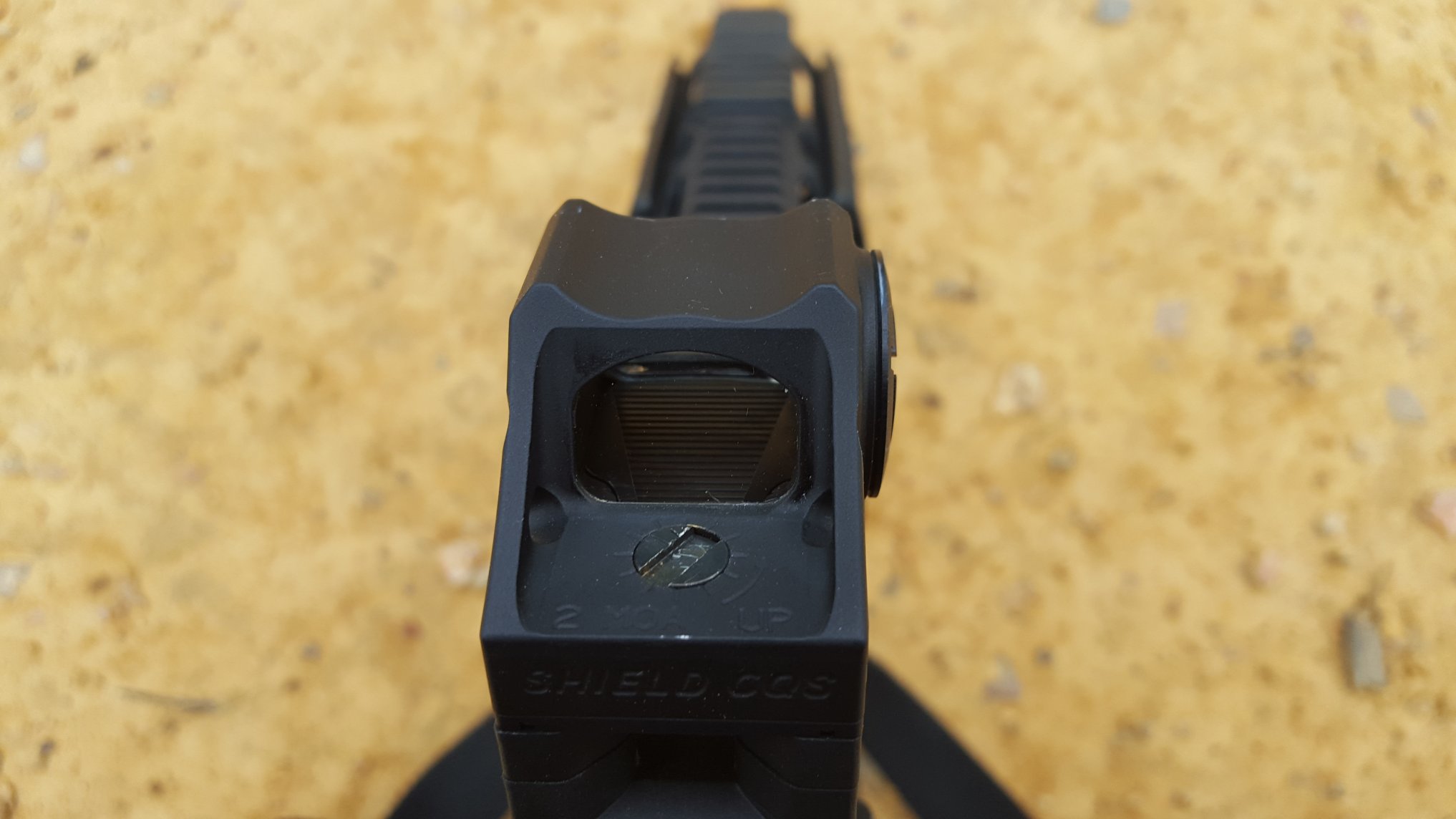 The 2-MOA [Minute Of Angle] red dot, while not really a true circle, [it’s] strength is the auto-brightness and the switch on the front. I thought it would only let you turn the auto-brightness on or off, but you can slide it to partially cover the light meter to control the brightness level. It was plenty bright during outside shooting. So, that’s good.

During indoor shooting, [the dot] was kind of dull, even with it set open all the way would prefer it to be a little brighter. The dot could also be brighter for [low-light/no-light] shooting indoors, using white light. 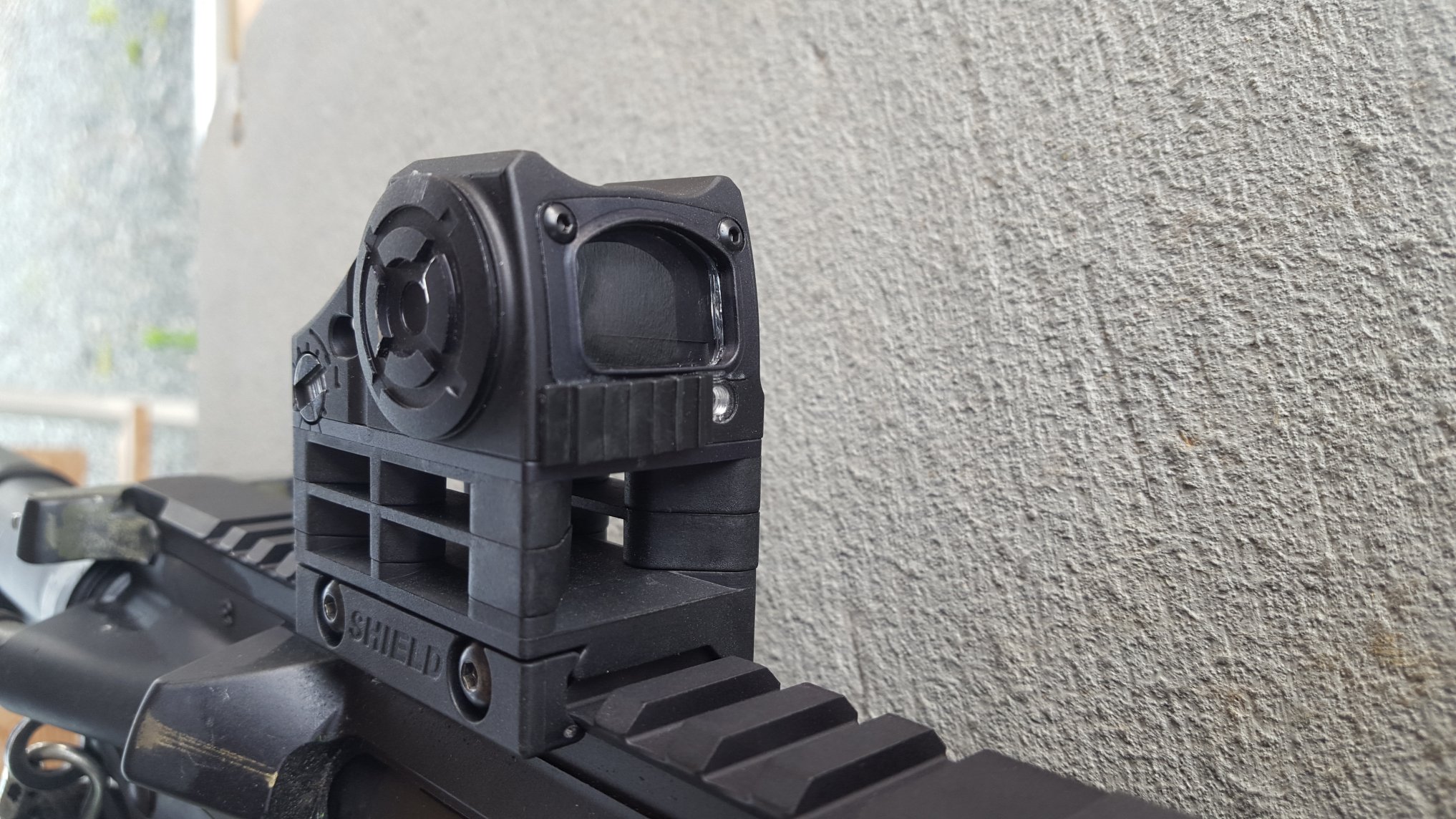 I’m pretty pleased it has auto-brightness. I think the brightness range could be expanded or more sensitive to changing light levels, but that could be asking too much of a mini red dot sight.

I was able to shoot pretty well with it out of the gate, and I think I would have no problem running it in a 3-Gun match.

Endurance wise only time will tell. [We’ll see] if it holds zero after a thousand rounds or so. As I mentioned [in a previous email message], I despise the plastic mount. It needs to come with a metal low mount for a [Mil-Std-1913] Picatanny rail for 45-degree offset, and its own metal riser to use as a primary rifle red dot.

I do think it’s a cool design worth looking at some more.”

The following are the relevant (exerpted) portion’s of Gurwitches initial email notes he was alluding to above: 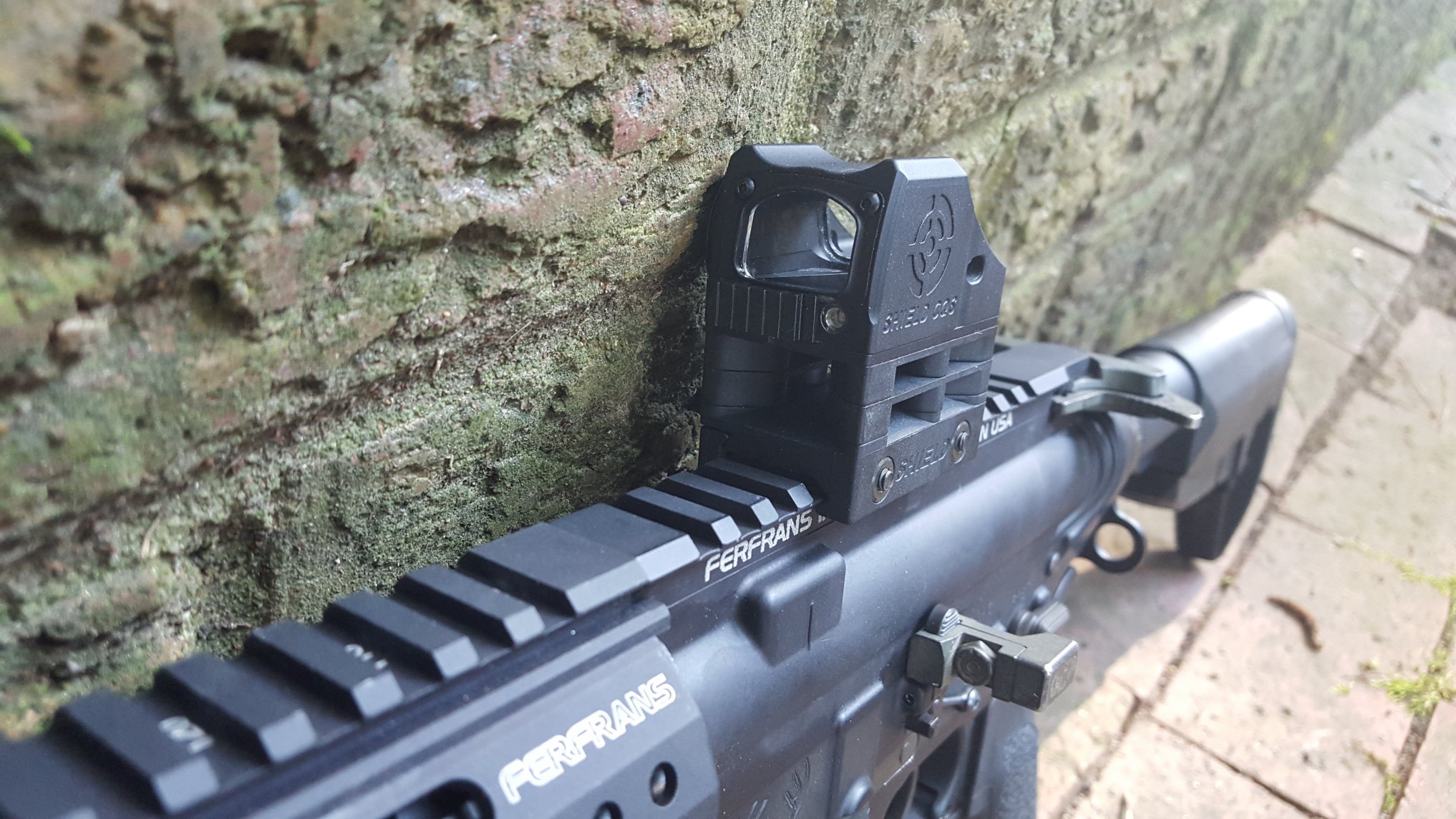 “My thoughts out the gate: I like the sight. [I could end up using it] a lot.

If it [CQS] has issues holding zero, the first place I would look would be the mount.

The zero adjustments are kind of a pain. They’re not click adjustments [that you can adjust] just by feel, [as opposed to] a lot of other mini-red dots, so it [Shield CQS] takes awhile to zero.”

And there you have it, a pretty good initial assessment, no? Gurwitch digs the Shield CQS, particularly the sight picture and speed of acquisition it provides during combat shooting drills, but recommends a few tweaks/improvements to make it even better and more durable.

Editor’s Note: The helmet-cam POV video clip below was shot during Gurwitch’s very first range session with the Shield CQS, which is impressive. It really highlights the CQS reticle’s ease and speed of visual acquisition during fast shooting.

The following information on the Shield CQS comes directly from the Shield website: 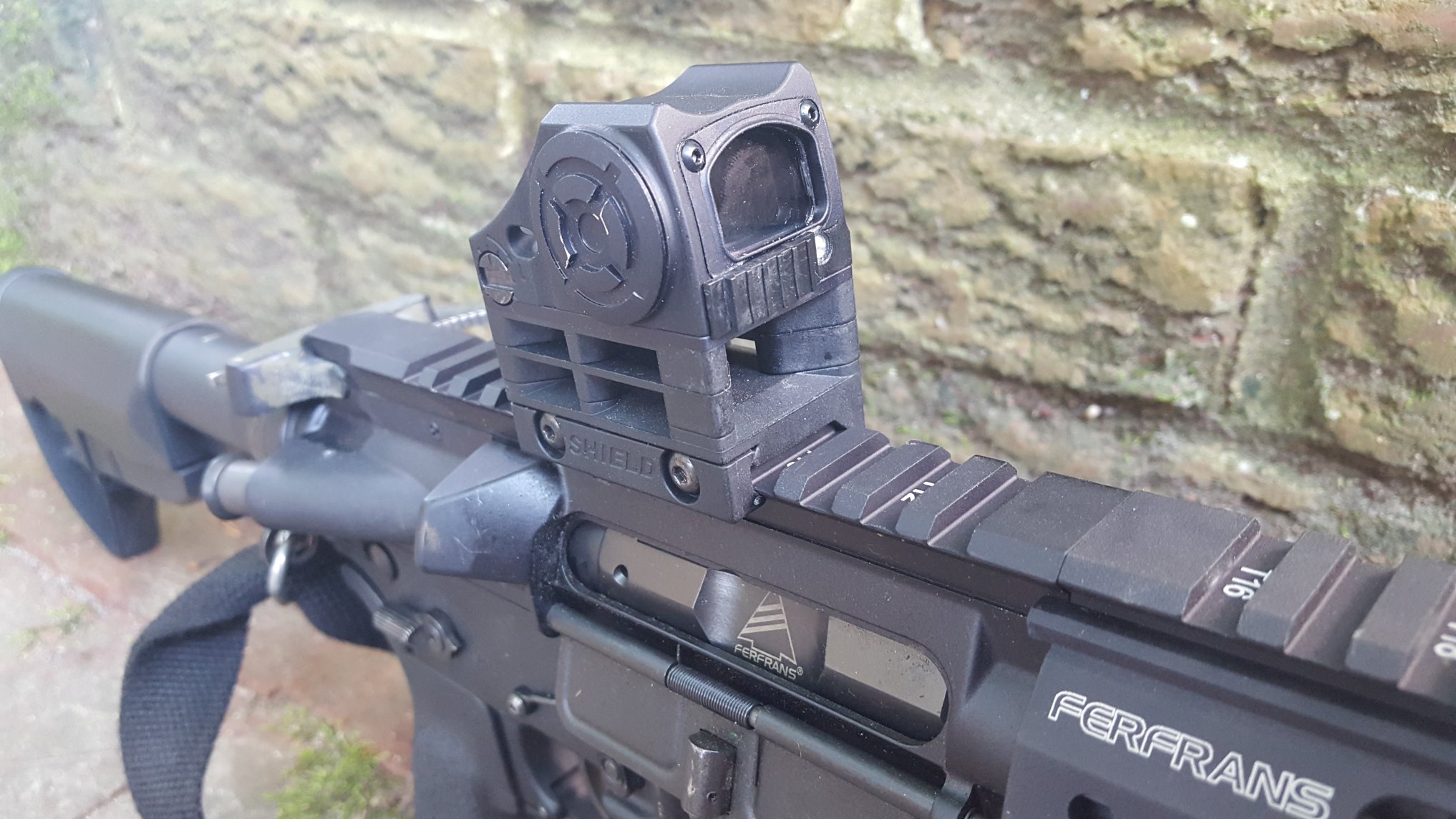 “SMALLEST, LIGHTEST AND TOUGHEST IN ITS CLASS

It remains the Smallest, Lightest and Toughest in its class, allowing for “full field of view” target acquisition and parallax free shooting.

Based on the award winning Close Quarter Battle-sight, chosen by the MOD for the Future Integrated Soldier Technology (FIST) programme. The CQS has all the features of the CQB ( Anodised Aluminium construction, automatic adjustment for ambient light conditions) and is the smallest, lightest ruggedized reflex sight available. Mounting solutions are available to fit most scopes on the market.

THIS SIGHT IS NOT UK EXPORT CONTROLLED.

The CQS red dot, reflex sight is a close relative of the Shield CQB, but with a universal mounting system.
It is smaller and lighter than the competition (66g / 2.3 oz including battery), but still meets the harshest military environmental specifications.

We supply a variety of mounts, including Picatinny and bespoke fittings for a variety of magnifying scopes. A range of spacer heights are available so that you can adjust the height of the red dot, for example to co-witness with iron sights or align with an in-line 3x magnifier.

BUILT TO PERFORM IN THE HARSHEST CONDITIONS.“