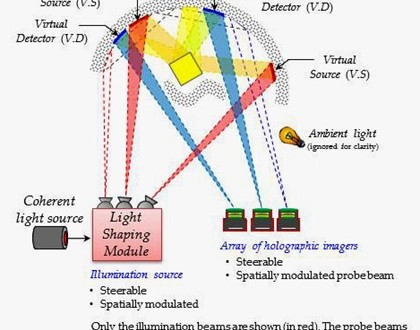 SMU/DARPA OMNISCIENT/REVEAL 3D Holographic Around-the-Corner Sight for the Urban Combat Fight: See Your Enemy (in 3D) before He Sees You! 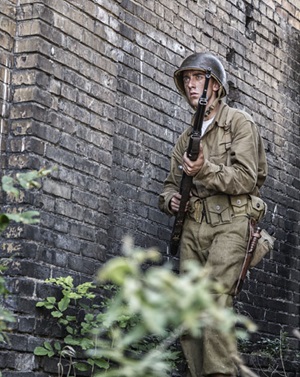 The OMNISCIENT/REVEAL tech utilizes a computer algorithm to “unscramble the light that bounces off irregular surfaces to create a holographic image of hidden objects”, according to the press release. “This will allow us to build a 3-D representation – a hologram – of something that is out of view,” said Marc Christensen, dean of the Bobby B. Lyle School of Engineering at SMU and “principal investigator for the project”. The following quotes from Christensen are the most interesting portions of the press release:

“Light bounces off the smooth surface of a mirror at the same angle at which it hits the mirror, which is what allows the human eye to ‘see’ a recognizable image of the event – a reflection.” 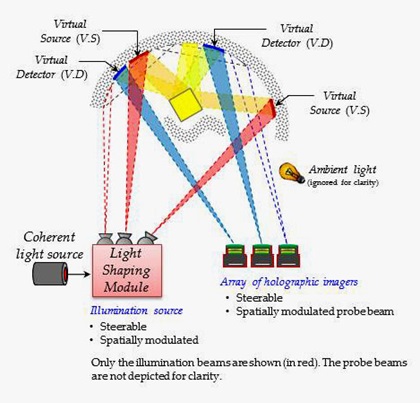 “But light bouncing off the irregular surface of a wall or other non–reflective surface is scattered, which the human eye cannot image into anything intelligible.”

“Can a computer interpret the light bouncing around in ways that our eyes cannot?”

“For example, the speed and sophistication of signal processing (the process of converting analog transmissions into digital signals) has reached the point where we can accomplish really intensive computational tasks on handheld devices.”

“What that means is that whatever solutions we design should be easily transportable into the battlefield.”

DR certainly hopes so (all of the above), since the ability to see around corners and behind walls (although we can’t see how at the moment) when fighting in and around structures (buildings) using a lightweight, ergonomic handheld device will provide for a potential game-changing combat capability that could potentially revolutionize dynamic direct-action and urban warfare missions involving dynamic CQB/CQC (Close Quarters Battle/Close Quarters Combat) gunfighting, provided the mobile package is indeed as lightweight, ergonomic and easy to carry and use and Christensen makes it sound.

Based on what we’ve read so far, it would seem much more likely that the OMNISCIENT/REVEAL tech will be more effective for seeing around corners of structures, rather than actually seeing behind walls directly in front of you, due to its reliance on reading and analyzing light reflection (and possibly refraction, as well), but we’ll try to get confirmation on this.

A little humor. Anyway, SMU will be working with engineers from Northwestern, Rice and Harvard.

SMU/DARPA OMNISCIENT/REVEAL 3D Holographic Around-the-Corner Sight for the Urban Combat Fight: See Your Enemy (in 3D) before He Sees You! by David Crane