DefenseReview recently mentioned Singapore Technologies Kinetics a.k.a. ST Kinetics in our article on the GDATP IAR/Ultimax 100 Mark V (Ultimax 100 MK5) LMG/SAW is offering an interesting and pretty slick-looking little lightweight, multi-calber submachine gun (SMG)/personal defense weapon (PDW) called the Compact Personal Weapon (CPW) for CQB/CQC applications and longer engagements out to approx. 100-150 yards. However, as this is written, the CPW is only available in 9mm Parabellum (9x19mm NATO) caliber, and what those future caliber offerings will be is anyone’s guess. In the meantime, it looks like what we’ve got here is an SMG/PDW with heavy HK MP7A1 PDW (4.6x30mm) influence, and one that’s been executed pretty well–provided it’s reliable, durable/rugged and accurate under adverse conditions and high round count  In fact, it could be argued that the CPW resembles an updated/modernized MP7A1. 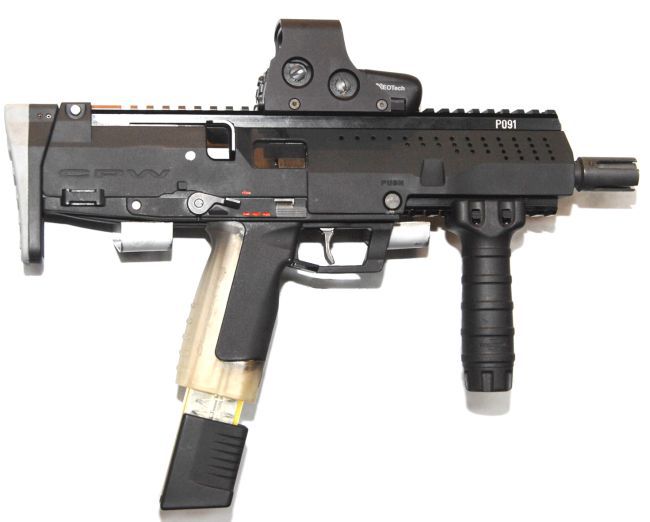 Cam recoil mitigation mechanism" to control recoil and muzzle rise and increase hits on target, and operates via delayed blowback. The CPW needs to employ an artificial/mechanical recoil attenuation/mitigation system, since it only weighs 3.3 lbs (1.5kg) empty/dry, and therefore can’t rely on weapon weight to control recoil. An empty 30-round CPW magazine (9mm) weighs .22 lbs (.1kg) and a fully-loaded mag weighs 1.1 lbs (.5kg) leaving the CPW with a maximum loaded weight of 4.4 lbs (2kg). Full-auto cyclic rate of fire (ROF) is a relatively high 900 to 1100 rpm, furthering the need for an artificial/mechanical recoil mitigation system.

The CPW’s design and configuration (appearance, control layout, etc.), including the safety/selector lever and telescoping/collapsible/retractable buttstock appear from the photos to be very MP7A1-like. However, unlike the HK MP7A1 PDW, the CPW’s pistol grip is slanted/sloped for enhanced ergonomics and natural pointing/aiming), and the rear of it is transparent, so the operator can see the remaining rounds left in the mag.

As I alluded-to in the first paragraph, the Compact Personal Weapon exhibits pretty slick execution. If it operates as well as it looks–i.e. it proves to be controllable, reliable, durable and accurate under adverse conditions and high round count)–ST Kinetics may just have a winner on their hands. The advantage of 9mm cartridge, the the reason this is the first version offered, is that 9mm Parabellum is the standard military NATO pistol and subgun cartridge and the primary law enforcement pistol and SMG cartridge in every Western country except the United States, where the .40 S&W now rules as a pistol cartridge. 9mm is therefore the most abundant/plentiful pistol and SMG caliber in the world. Defense Review would very much like to see how a .45 ACP version of the CPW performs, if that is one of the additional calibers offered. It would also be interesting to see a 10mm version. Perhaps a 10mm sabot AP round could be developed for it. Or, ST Kinetics could develop their own proprietary PDW cartridge for it, or make a version that excepts another company’s PDW cartridge.

Note: It’s possible that the Steyr TMP a.k.a. Brugger & Thomet (B&T) MP9 9mm SMG gun was a secondary design influence on the CPW, but this would be pure conjecture.

DefenseReview would very much like to see how the CPW SMG performs at the range, and we’re going to run one at the earliest opportunity.

David Crane started publishing online in 2001. Since that time, governments, military organizations, Special Operators (i.e. professional trigger pullers), agencies, and civilian tactical shooters the world over have come to depend on Defense Review as the authoritative source of news and information on "the latest and greatest" in the field of military defense and tactical technology and hardware, including tactical firearms, ammunition, equipment, gear, and training.
Previous GDATP IAR (Infantry Automatic Rifle)/Ultimax 100 MK5 LMG/SAW (Photos!)
Next U.S. Air Force Having Serious Trouble Keeping F-22 Raptor Pilots