All photos contained in this article were taken by, and are the exclusive property of, DefenseReview.com. Click on photos below to view them full-size.
While DefenseReview was at the ArmorShield USA booth at IACP 2005 Miami, we ran into Patrick Connors and Heath Fleener from LE Gear Tactical LLC. Both men were toting around some Grade-A equipment. Mr. Fleener made it a point to show us the Stag Arms Stag-15L lefty AR-15/M16-variant tactical carbine (in M4 Carbine config) he was carrying that sported an EOTech 552 HOLOsight (a.k.a. Holographic Weapon Sight/Holographic Diffraction Sight) and flip-down vertical foregrip.
Getting back to the weapon itself though, the Stag-15L left-handed rifle/carbine is… 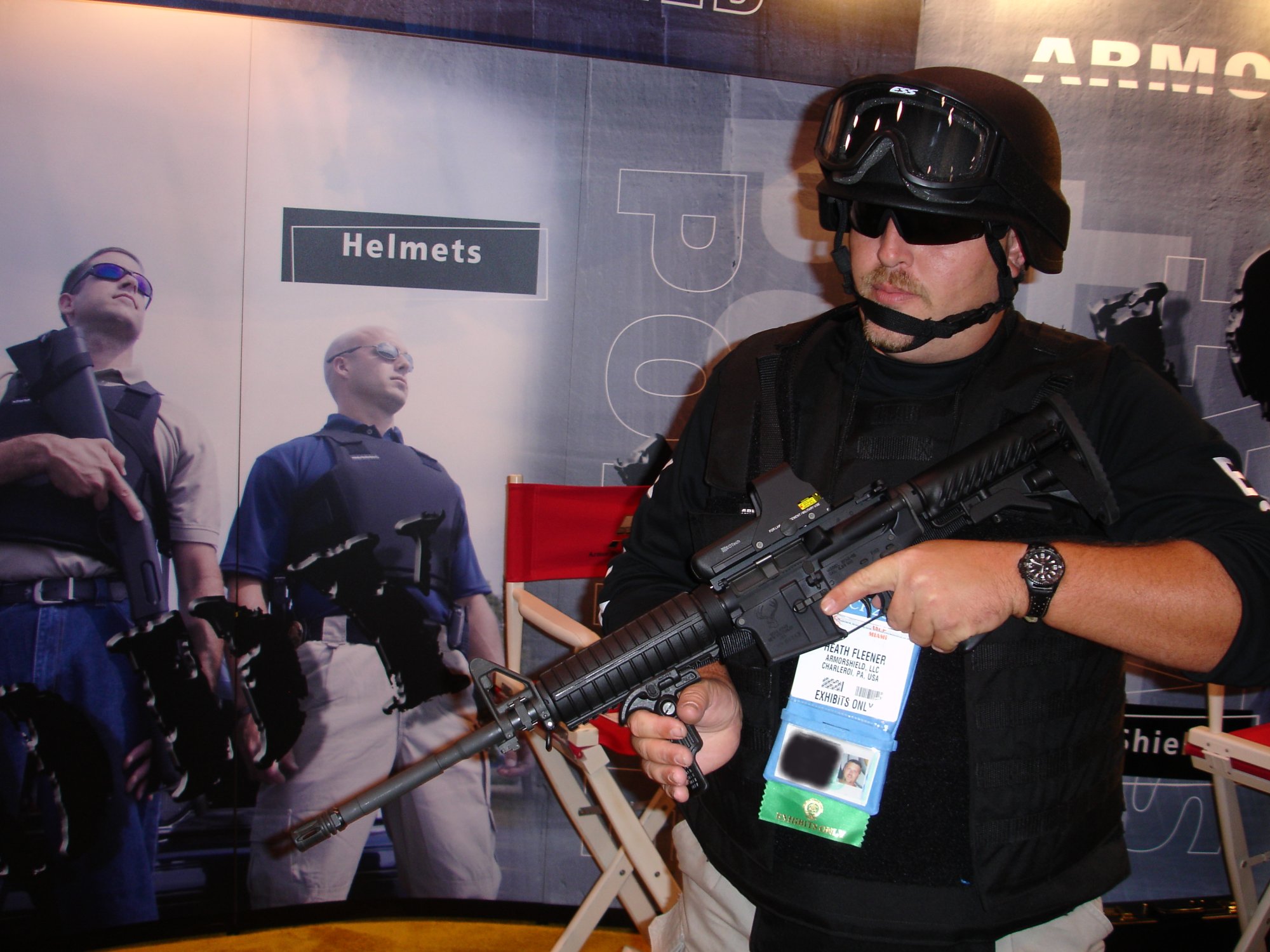 just one of several excellent AR-15/M16-variant tactical rifle/carbines (including right-handed models) made by Stag Arms out of New Britain, Connecticutt. Stag Arms designed and developed the Stag 15L specifically for lefties who are sick of hot brass flying down their neck (and down their shirt), hot gases in their face, and being distracted off the shot by the brass flying toward and across their face. Basically, they mirrored a right-handed AR-15/M16/M4 upper receiver exactly in order to achieve the same reliability of a righty AR-15/M16 with the functionality of a lefty rifle.

Once an initial prototype upper was created, the project then went into hundreds of hours of research and development. The Stag-15L development team talked to gunsmiths, engineers, military operators, LEO’s (law enforcement officers), and "anyone and everyone who knew anything about rifles, engineering, or AR’s," in order to get the product to production three months later. According to Stag Arms, they’ve been approached by the FBI and military personnel stationed in Iraq and other parts of the world regarding th Stag 15L. Oh, and in case you’re right-handed, Stag Arms makes right-handed rifles and carbines (and complete right-handed uppers), as well, and these right-handed AR-15/M16 and M4 Carbine-variant weapons are as good as an AR gets. These standard/righty versions are designated as the Stag-15 without the "L".
A quick note on EOTech and Aimpoint optical gunsights: The EOTech 552 HWS/HDS and its competitor, the Aimpoint CompM2 Red Dot Sight (tube sight), both enable the shooter to achieve an extremely fast sight picture in CQB/CQC (Close Quarters Battle/Close Quarters Combat) scenarios, and are ideal for urban operations (MOUT). The author has found the EOTech 552 HOLOsight to be slightly faster on target (for him) when shouldering and engaging multiple targets in high-speed drills, but it’s close. The Aimpoint CompM2 Red Dot Sight has a significantly longer battery life. Both sights are excellent and in current use with U.S. military infantry units–including Special Operations (SPECOPS) units–in Afghanistan and Iraq. 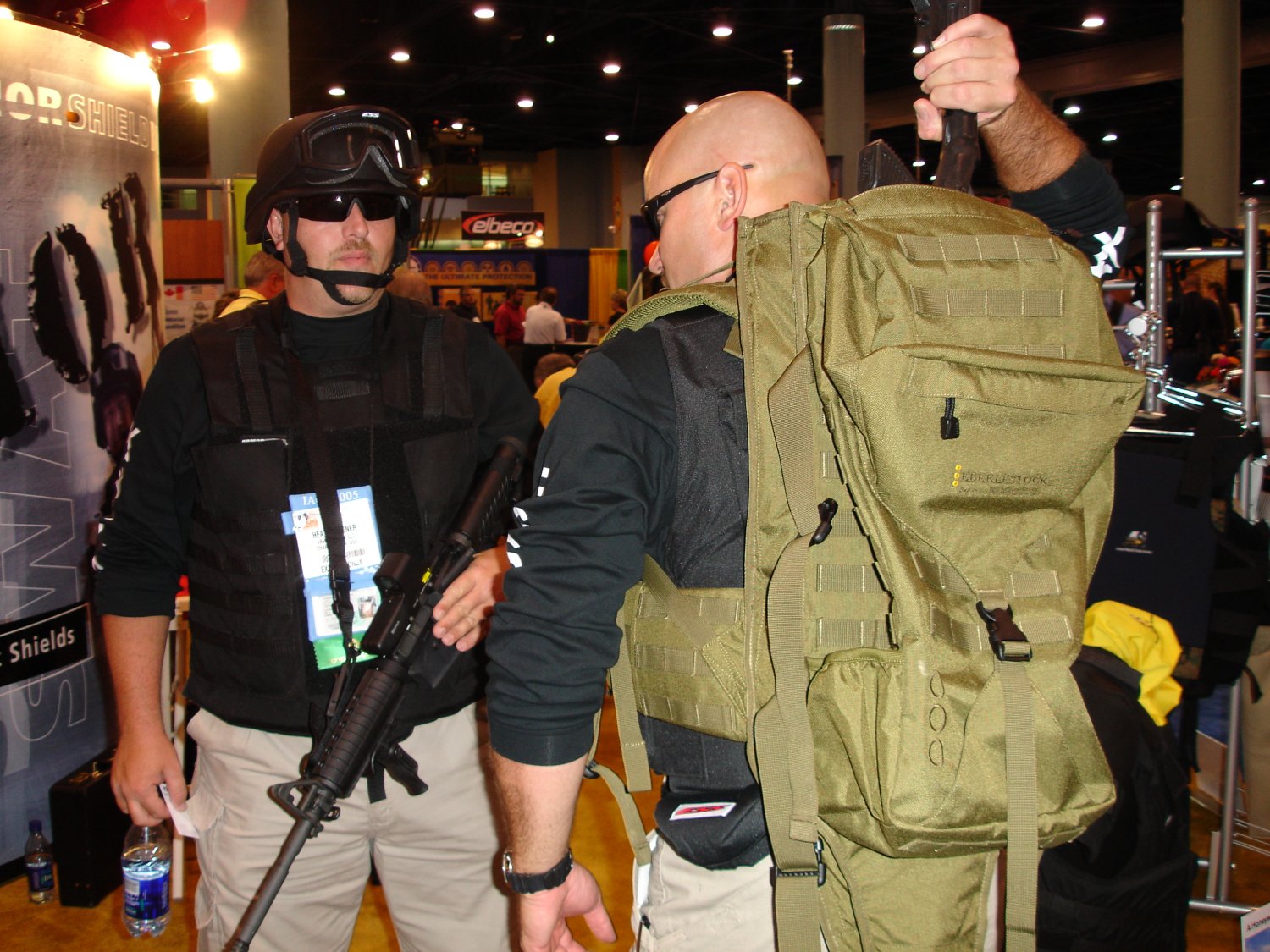 In case you’d like to carry a Stag-15L tactical carbine/subcarbine/SBR or rifle while rappelling down a cliff, or you’re a sniper and would like to carry it as a secondary rifle/carbine, Pat Connors of LE Gear Tactical was showing off the perfect pack for you. It’s called the GSO5MG Gunslinger Backpack, and it’s made by Eberlestock USA, LLC. The Gunslinger pack is one of Eberlestock’s packs designed and developed by Glen Eberle specifically for U.S. military Special Operations personnel.

The Eberlestock Gunslinger Backpack was designed/developed for military Spec-Operators who need to keep both hands free for activities like rappelling while carrying up to two long guns (assault rifle/carbine/subcarbine/SBR and sniper rifle, assault rifle/carbine/subcarbine/SBR and shotgun, sniper rifle and shotgun, etc.). The operator can secure a weapon inside the Gunslinger’s Backscabbard weapons pouch and/or inside Eberlestock’s A1SS Side Scabbard pouch, which attaches to the side of the Gunslinger (appropriately enough). Th GSO5MG Gunslinger Backpack is a 2900 cubic inch pack, and is wide enough to hold any type of rifle with a large scope attached. 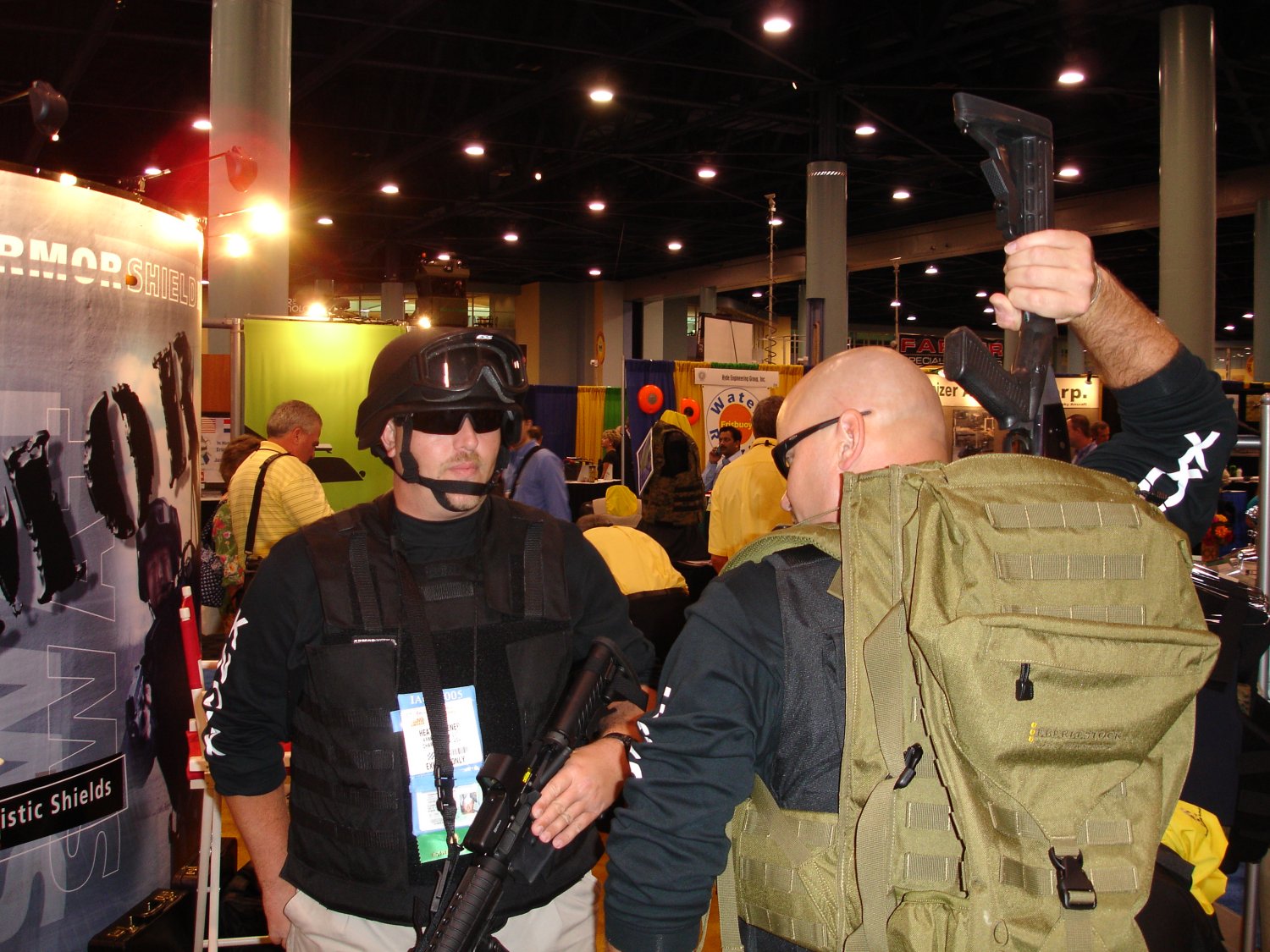 On the GSO5M Gunslinger tactical backpack information page, Eberlestock states that a DPMS PANTHER™ LONG RANGE 308 7.62x51mm rifle (made by DPMS Panther Arms) with Leupold 6.5-20×50 LR/T scope attached will drop right in and slip right out. Even so, the company states that the Gunslinger is still "compact and excellent for rappelling," and "SWAT teams will find it useful for carriage of a smoke launcher, or for carriage of a second weapon for the entry team." The Gunslinger tactical pack also offers full side acess to the main compartment and a hydration bladder housings. Yes, the Gunslinger is fully compatible with your Camelbak tactical hydration system. Defense Review doesn’t yet know whether or not the Eberlestock Gunslinger Backpack is compatible with Camelbak systems that incorporate Camelbak’s HydroLink Modular Connection System, which allows the use of the CamelBak Chem Bio Reservoir 4.0 (CBR 4.0) with Duraflex Barrier Technology. We’ll try to find out.
On a side note, Defense Review actually first saw Eberlestock Special Operations backpacks at SHOT Show 2005 in Las Vegas, but for some reason, we just never got around to reporting about them. It should be noted that it was several military and law enforcement operators whom we ran into at the show who made us aware of Eberlestock. To a man, they all had extremely high praise for the Eberlestock packs.
DefenseReview will be publishing articles on DPMS Panther Arms AR-15/M16-variant tactical rifles and ArmorShield body armor, in the future.
If you’d like to acquire or get more info on the Stag Arms by phone at 860-229-9994, by fax at 860-229-3738, or by email at [email protected].
If you’d like to learn more about (or purchase) the GSO5M Gunslinger Backpack for your next mission, you can contact Eberlestock USA LLC by phone at 208-866-5695, by fax at 240-526-2632, or by email at [email protected]. Ask for Glen Eberle.
If you’d like to get in touch with the boys at LE Gear Tactical, LLC, the following is individual contact info for Pat Connors and Heath Fleener:
Patrick M. Connors
Territory Manager
LE Gear Tactical, LLC
7212 North Shadeland Ave., Suite 220
Indianapolis, Indiana 46250
317-538-9999 Direct
317-578-0476 Fax
[email protected]
Heath Fleener
Territory Equipment Training Specialist
LE Gear Tactical, LLC
P.O. Box 562
505 N. Indiana St.
Atwood, IL. 61913
217-578-3897 Office
217-578- 3543 Fax
217-412-8911 Cell
[email protected]
Stag Arms Lefty Tactical AR Carbine and Eberlestock Gunslinger Backpack by David Crane

David Crane started publishing online in 2001. Since that time, governments, military organizations, Special Operators (i.e. professional trigger pullers), agencies, and civilian tactical shooters the world over have come to depend on Defense Review as the authoritative source of news and information on "the latest and greatest" in the field of military defense and tactical technology and hardware, including tactical firearms, ammunition, equipment, gear, and training.
Previous Beretta CX4 Storm Semiautomatic Carbine in Digital Desert Camouflage
Next Fiocchi to make 5.7x28mm Ammo for Five-seveN USG Pistol and PS90 Carbine