On September 1, 2007 (9/01/07), DefenseReview was contacted by Sean Carroll of STRAC Technologies a.k.a. STRAC Tech via email to let us know about a product that looks on its face to have some serious tactical merit and promise. The product is a patented chest-worn modular mag carrier system (i.e. box magazine carrier system)/fast-weapon-reload device called, appropriately enough, the F.A.S.T. System Model M4 (TM) a.k.a. ST-1 F.A.S.T. System (TM), that feeds fresh/loaded AR-15/M16 magazines to the operator as quickly as he can grab them. F.A.S.T. stands for "Fast And Smooth Transition."

In a nutshell, the ST-1 FAST System (TM) fast-magazine-feeding/weapon-reloading device was designed and developed to allow the operator/warfighter to conduct ultra-fast (primary) weapon reloads in adverse combat conditions while allowing him to maintain his focus on the target(s)/threat(s). The company claims that the FAST system allows for sub-2-second reloads while keeping one’s weapon and eyes on the target/threat.

Sean billed the system as "the most elite load bearing vest in the world", which is pretty big talk, and… 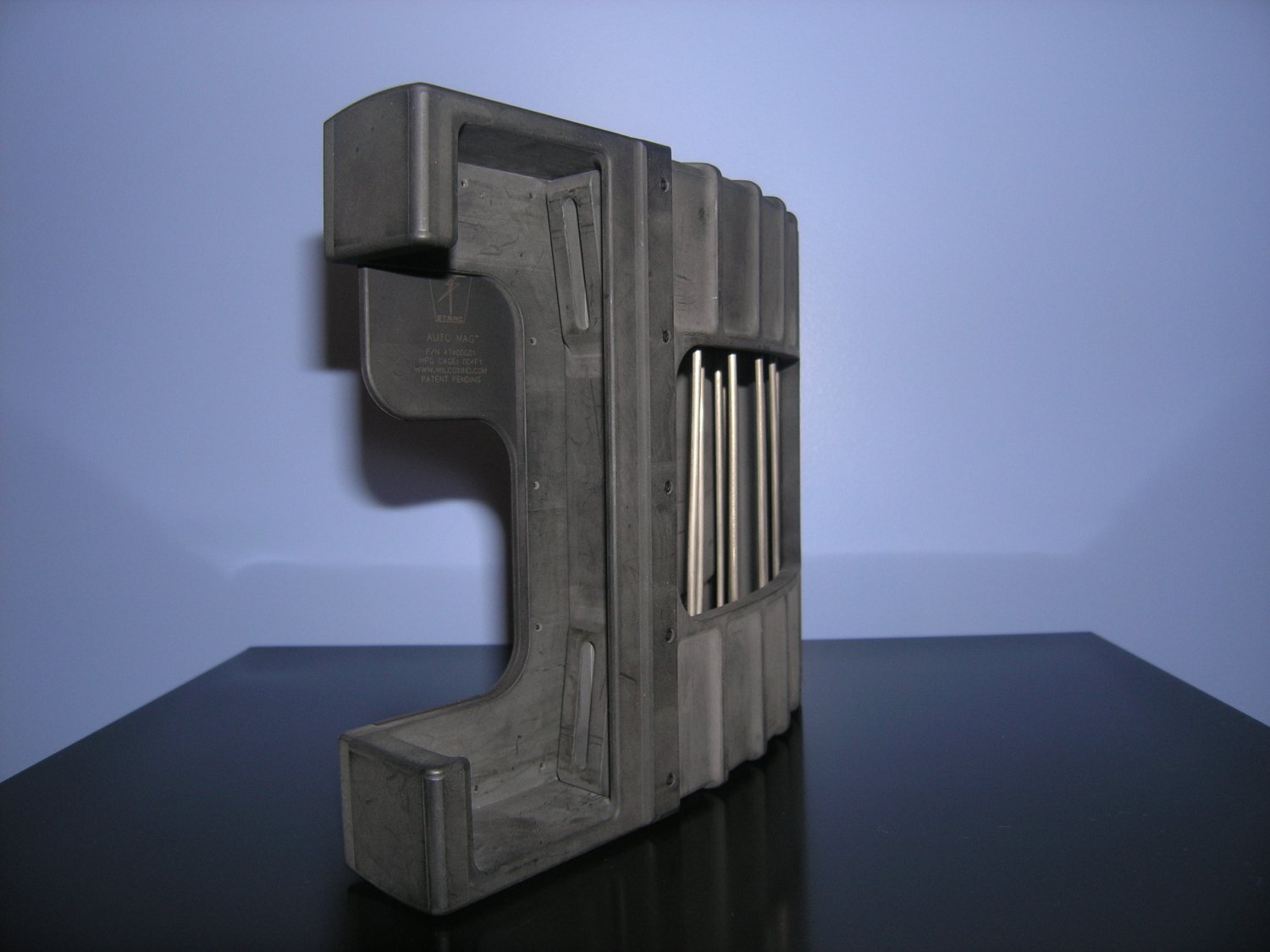 sent us two demonstration video clips that showed the F.A.S.T. System M4 (TM) in action. Needless to say, based on the hyperbole/video combo, we were intrigued, and have been following the system’s development ever since.

The STRAC Technologies ST-1 F.A.S.T. System (TM) / F.A.S.T. System Model M4 modular mag carrier/fast-mag-feed system is currently being manufactured OEM-manufactured by Wilcox Industries Corp. from "high-impact material". Since, DefenseReview hasn’t examined, or even seen, the system in-person, yet, we’re going to guess that it’s made from some type of high grade polymer (a.k.a. plastic) or fiberglass-reinforced polymer. However, this is just conjecture, at this point. We could be wrong.

The STRAC Tech F.A.S.T. System M4 comes with two (2) ambidextrous mag carriers that each hold up to three (3) 30-round AR-15/M16/M4/M4A1 magazines (box magazines a.k.a. box mags). The "ambidextrous" part means it each multi-mag carrier can be worn on either side of the body. It would seem that standard load-out for the FAST System M4 is two carriers, giving the operator 6 mags at his immediate disposal.

According to the company, the feed spring in the ST-1 FAST System (TM) is a specially-designed, high-stress/high-power stainless steel box spring that makes the system very difficult to jam. However, if there is a jam, the F.A.S.T. M4’s nylon carrier has a side entry point for the operator to quickly access the interior of the system. Drainage holes are utilized to allow water to exit the system, and a seated follower is incorporated to prevent foreign debris from getting inside it. 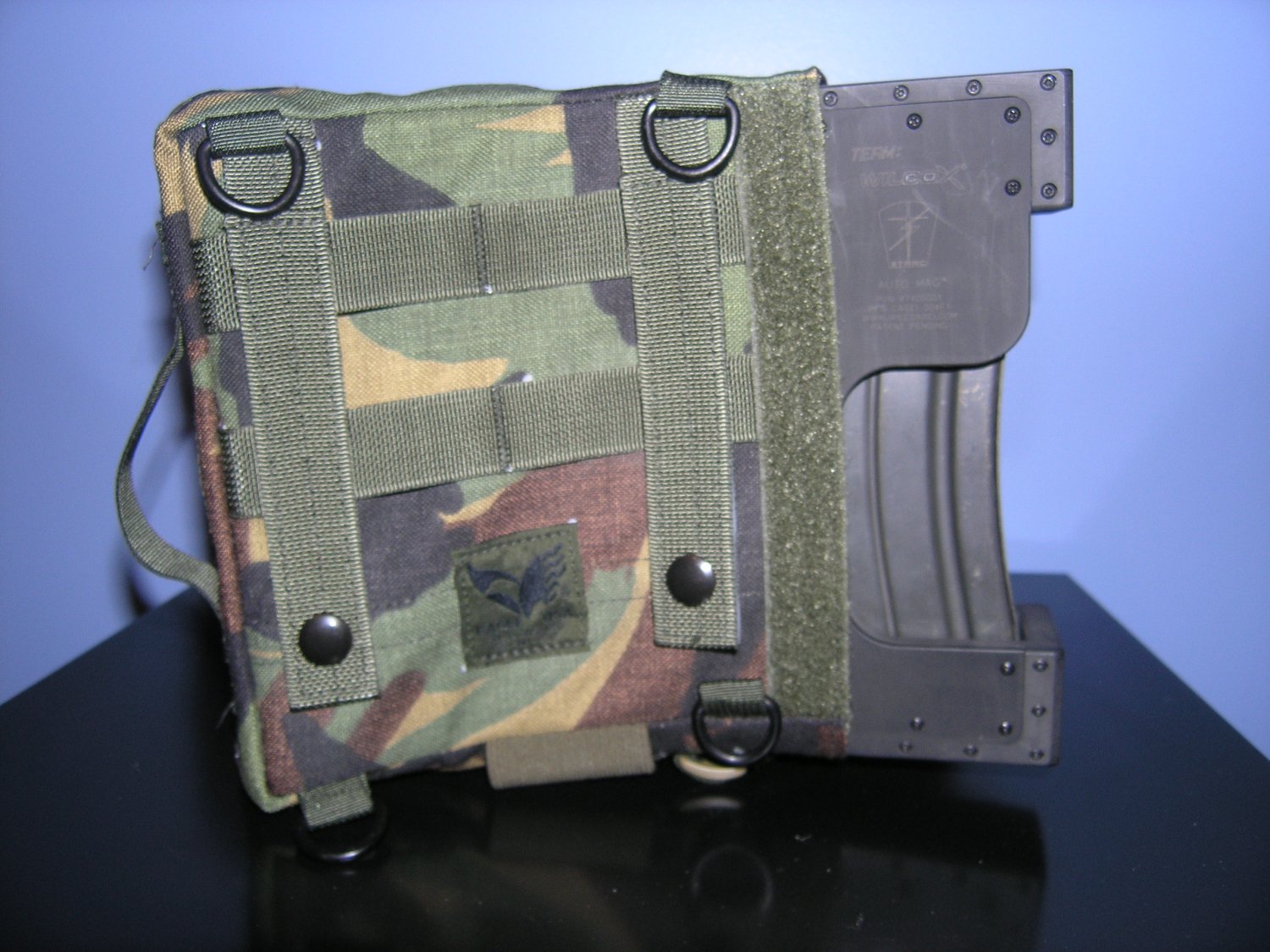 The two Nylon outer carriers/pouches that come with the system are made by Eagle Industries from 1000D Nylon, and are available in multiple colors and camouflage patterns (a.k.a. camo patterns).

STRAC Technologies describes itself as "A Tactical Solutions Company" (TM). That sounds just about right, and they appear to be off to a pretty good start, provided the ST-1 FAST System M4 weapon-quick-reload system works as advertised. We’ll see. Defense Review is currently working to get a test sample for T&E (Test and Evaluation), however the system is already being tested by U.S. forces (military forces), including U.S. Special Operations Forces (SOF) in the theater of operations in Iraq.

According to the company, future versions of the ST-1 FAST System will be compatible with other types and calibers of rifle/weapon mags (rifle/weapon magazines).

When I first read Sean’s initial email message to me, my marketing brain immediately switch on and went to work, and the name "FAST-Mag" was the first thing that sprang to mind. I think "FAST-Mag" would be a good name for the product. However, as I write this, I just performed some quick web reconnaissance/research, and found this demonstration video by Mil-Spec Monkey for a "rapid-change magazine carrier" / fast-weapon-reload/mag carrier device made by ITW Military Products called, interestingly and coincidentally, "FAST MAGS". FAST MAGS appears to have been designed and developed for pretty much the same purpose as the ST-1 FAST System (TM): to provide operators with a fast-change rifle mag carrier system that allows for faster weapon reloads. However, unlike the ST-1 FAST System, FAST MAGS only holds one magazine. FAST MAGS’ retention system allows the operator to hang the mag upside down and thus pull down to release the mag, if the operator wishes. So, if STRAC Tech were to use the name "FAST-Mag", it might create some legal trouble with the folks at ITW.

The phrase "Speed Feed" also comes to mind, but this latter phrase might also cause a legal problem, since there’s a company called SpeedFeed that makes a line of SpeedFeed Stocks.

But, here’s something STRAC Tech can potentially use: a simple tagline like "Get STRAC’d" or "Get STRAC’d FAST" might indeed work well. Just a couple of potential–and very simple–tagline/slogan ideas (off the top of my head) for Sean Carroll and the boys at STRAC Technologies. As of this writing, it doesn’t appear that anyone’s using either of those, yet (unconfirmed/unverified).

Anyway, the following is a background brief that DefenseReview received from Sean (Carroll) that describes the ST-1 FAST System / FAST System M4’s design and development history: 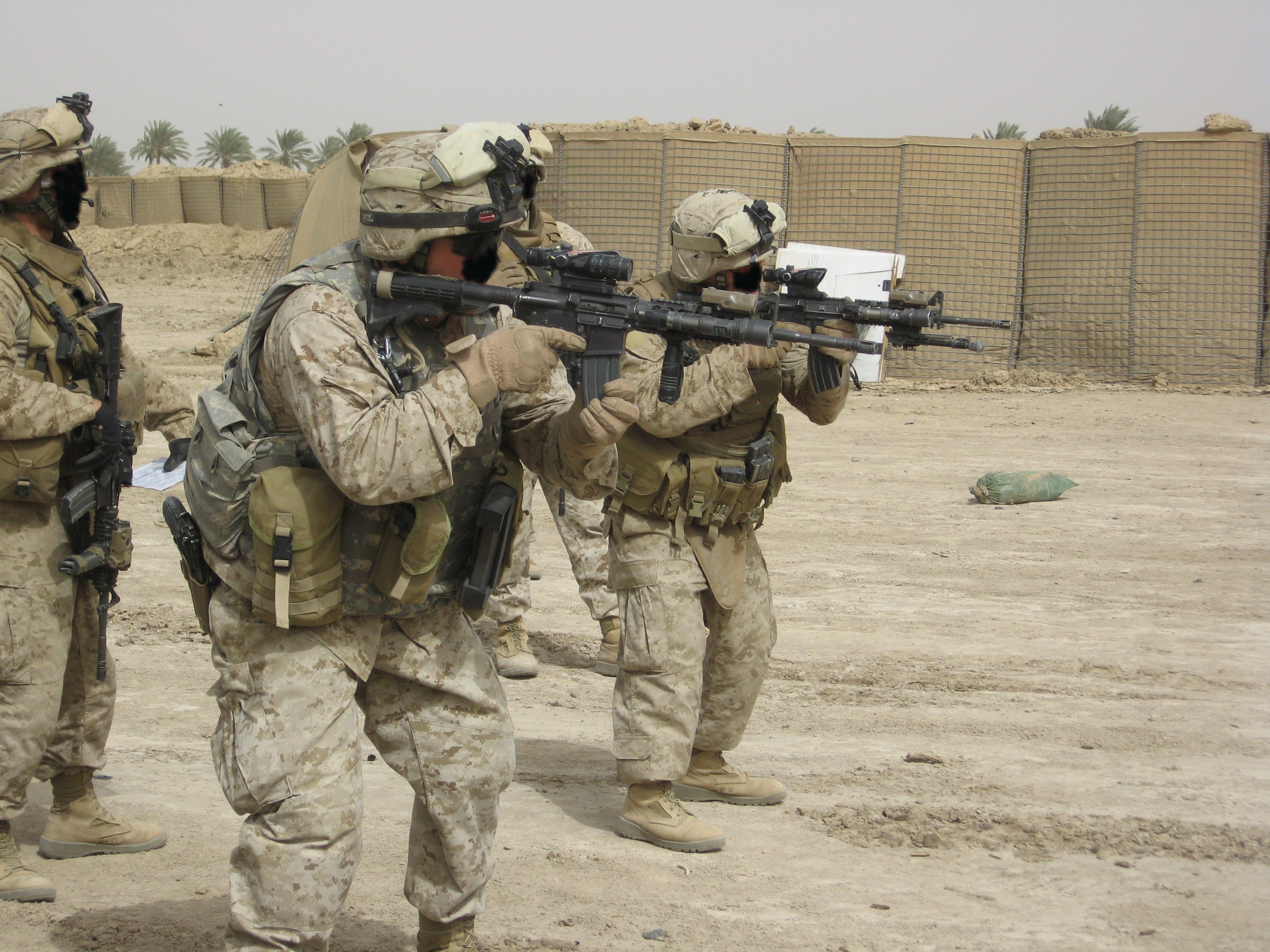 Good to hear from you. The following is a brief summary of the information we discussed tonight.

USAF competitive shooter (1990 – 1995). Although I had no experience designing gear I would often alter the gear I was issued so that it would be more effective for speed. For example I would take sandpaper to the snaps on the ammo pouches just so I could get them open faster. I would also place the ammo pouches in a position located under and as close to the magazine well as possible. It didn’t help much but a tenth of a second was a tenth of a second. The idea of recovering a magazine from the exact same place every time was a thought that was not yet pursued.

In 2003 the idea for the F.A.S.T. System took off. The very first prototype was made of wood and was tested on Thanksgiving Day 2003. In 20-degree weather we were knocking out continuous sub 3 second reloads. Between shoots we would have to sit in the truck to get the feeling back in our hands. We knew by the end of the day that we were on the right track. After 5 years of research and development we have come up with the most effective means of reloading in the world. 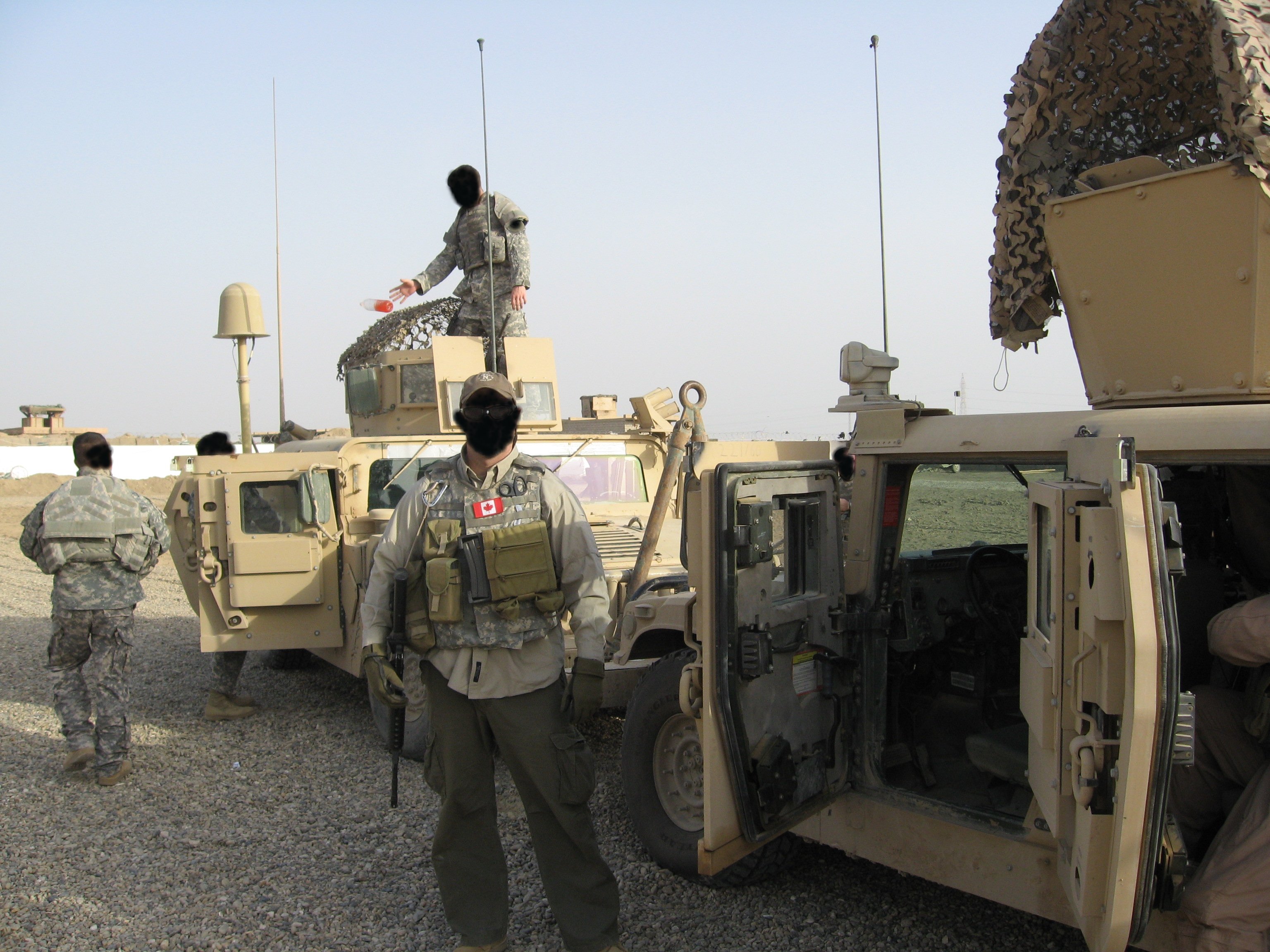 “Never once did the ST-1 FAST SYSTM fail the operator during combat or training. The
environment varied from mildly cool temperatures to warm and dusty, never exceeding 100 degrees.”

“there was not one magazine misfeed.”

“The ST-1 FAST SYSTEM’S design greatly
enhanced this operator’s reload time in a controlled
environment from 2.8 seconds to 1.7 seconds. The
operator was able to shave just over a second off of
his reload time after practicing with the ST-1 FAST
SYSTEM for 10 minutes. Creating muscle memory for the
operator to know exactly where he reaches every time
to grab a magazine is an idea always thought of and
now with the ST-1 FAST SYSTEM it has been achieved.” 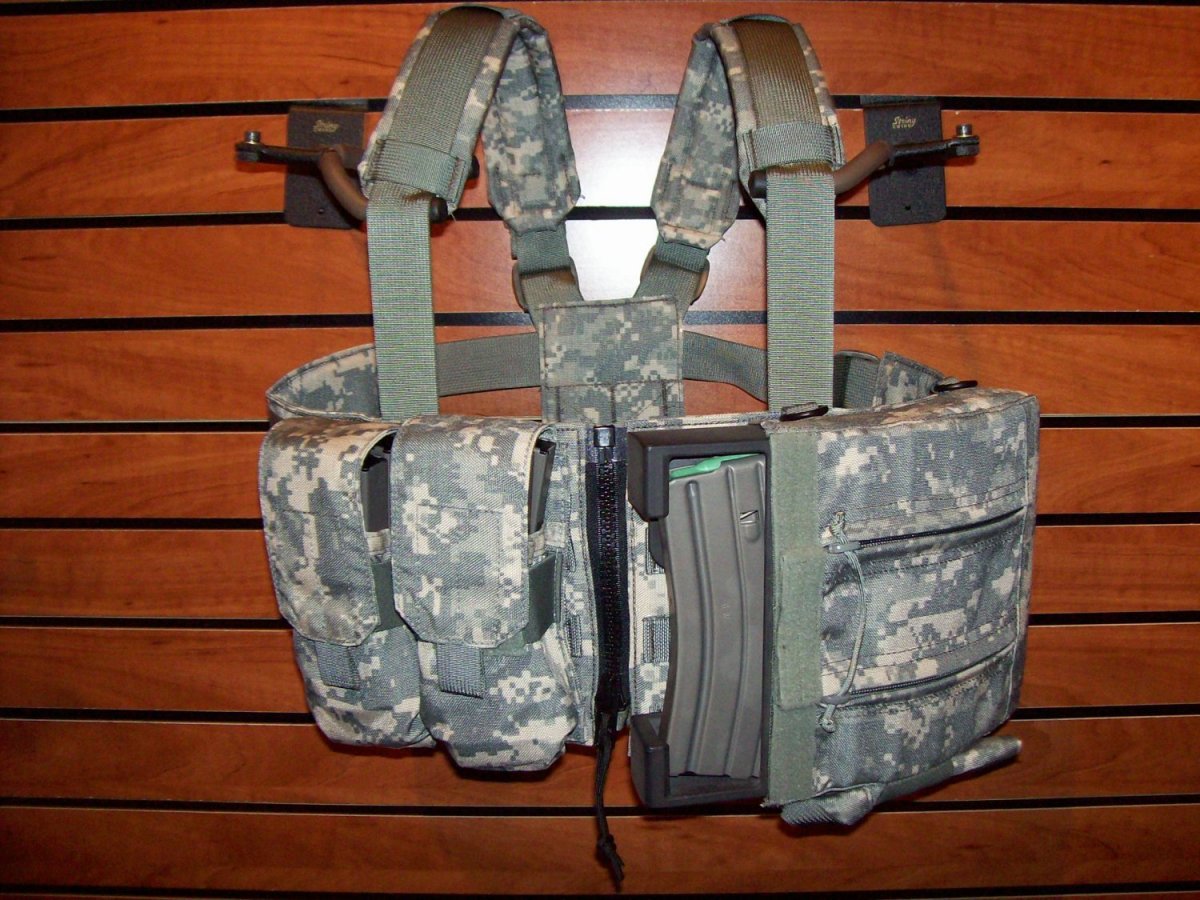 “The ST-1 FAST SYSTEM is a piece of equipment
that can directly save the life of an SF Operator in
combat with extremely fast reloads. Creating muscle
memory for the operator to know exactly where he
reaches every time to grab a magazine is a phenomenal
idea.”

“Standard operation procedures have the SF operator transitioning to his pistol when
his weapon magazine goes dry. However with sub 2 second reload times the operator can just as quickly reload his primary weapon and continue fighting. The ability to stick with and use your primary weapon without having to go to your pistol alone makes this
system worth procuring. It is this operator’s opinion that the ST-1 FAST SYSTEM is a piece of equipment that can save an operator’s life by improving his reload
times and allowing him to engage the enemy.”

On of these quotes from SF addressed the need for MOLLE webbing:

“MOLLE webbing is needed on the outside of
the pouch so the operator doesn’t lose valuable “real
estate” on his kit.”

Because of this we will also offer molle compatible carriers.

We will be designing a F.A.S.T. System for many different magazine fed weapons.

We will also be releasing patent pending air-soft adapters that snap onto the bottom of air-soft magazines. These adapters allow air-soft to use the system." 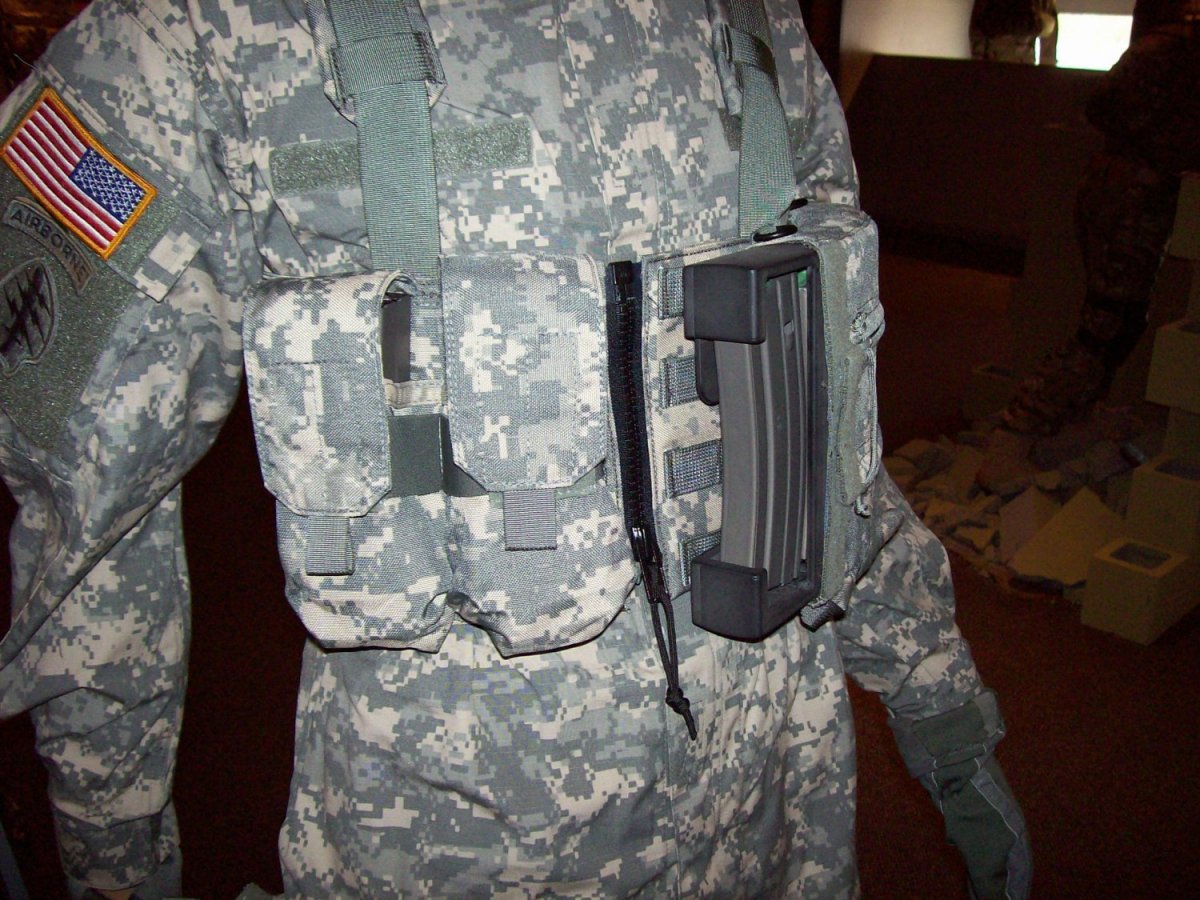 The first response version of the FAST system has been
completed. Our 10-0 tac vest is intended for
uniformed patrol, L.E, or Security personnel. It is
designed to be rapidly deployed over a uniform or
external body armor in responding to active shooter
incidents.

The attached photos reveal the hi-ride design of the
system. This feature provides un-obstructed access to
duty belts and positions rifle magazines close to the
magazine well for sub 2 second reloads. The spare
magazine pouches shown on the opposite side of the
unit are for demonstration purposes only. This area
can be utilized to attach any equipment pouch
necessary.

This information will be posted on our site in the
coming weeks.

Strac Tech has an instructional video on YouTube for the FAST System M4, accompanied by the following text:

Patent Pending ST1-FAST SYSTEM delivers the fastest continuous reloads in the world (Sub 2 seconds). Life expectancy in combat increased greatly over current vest’s. Speed and comfort unmatched! Coming Spring 2008 from STRAC Technologies – 802-291-0075. UNIQUE FEATURES:
1. Magazines are easily recovered from the SAME EXACT location allowing the operator to focus on the threat – NOT the reload.
2. Position of EVERY magazine provides the greatest economy of motion.
3. No pouches!
4. Modular system adapts to current load bearing gear.
5. Magazines are configured comfortably around the sides of the torso – CLOSER to the body – giving the operator a better center of gravity. It also allows the operator to get closer to the ground in the prone position while delivering and taking fire.
6. One touch feature allows the operator the ability to quickly remove magazines without having to shift or adjust them prior to reloading.
Website – COMING APRIL 2008


Editor’s Note: The acronym/term "STRAC" has an interesting history. It was originally the acronym for the Strategic Army Corps. It later acquired secondary meaning as "Strategic, Tough, Ready Around the Clock", as well as "Strategic, Tactical and Ready for Action in Combat". Basically, "STRAC" was used to describe a soldier/trooper/warfighter that had his "shit wired tight" and was always ready for action (i.e. combat action), i.e. "good to go" 24/7/365.

"STRAC" is currently the acronym used for the U.S. Army Standards in Training Commission.