As a 24-year veteran of tactical law enforcement and training consultant for federal and state law enforcement agencies. I have had the chance to test and evaluate hundreds of products for vendors worldwide. My training company has trained members from US Marshal Service, FBI SWAT, US Customs SRT,
Ft. Benning SRT, Ft. Rucker Anti-Terrorist unit, USCENTCOM, as well as hundreds of state and local officers.

Anyone who has attended my courses will tell you that I would never associate myself or my company with a vendor or a product which did not have a real world tactical value to law enforcement.

Due to recent world events tactical teams, law enforcement and public safety have been seeking technology to assist them in…

the handling of high-risk incidents.

Tactical teams often use mirrors or pole cams during covert entries. They can also be used for confined space clearing such as attics, stairwells, crawl spaces and bi-level clearing.

Consider your team’s mission requirements when conducting T/E of a remote sensing unit. SWAT is ‘tuff’ on any piece of equipment. SWAT operates during all types of weather conditions (rain, snow, winter, summer etc.). Does your team have waterborne duties? As technology improves can the unit be up graded? Does the unit have an Under the Door Viewer (UDV)? Can small probes be attached for intelligence gathering?

There are two basic types: power articulating and manual articulating. This means the camera head moves via remote control or is moved manually by the operator. Most remote articulating systems make a humming type sound when adjusting the view of the camera, this is not very covert. Also when the camera head is attached to the pole system if damaged the entire system must be sent back for repair.
Most pole cams have a small-attached monitor on the pole itself; this could pose a problem for damage if the system operator must disengage the unit to become an active team member.

My team evaluated a total of four (4) different units during the T/E phase. Unit’s cost ranged from $1,500.00 to $15,000.00. Each unit was tested for over 40 hours and deployed on actual missions. One unit was quickly disqualified as it had no water resistance properties and per the manufacture should not be used on or near the water. A second unit was damaged during training when it was knocked out of the operator’s hands during a staged physical confrontation on a stairwell. Third unit was two large and deploy for confined space clearing i.e. small watercraft boarding.

The fourth unit was the Wolf Pack Tactical Remote Viewing System (TRVS), made by Sciax Defense. This is the unit my team selected. It met all our needs and could be undated in the future as technology advanced.

The Tactical Remote Viewing System (TRVS) is a 21st century improvement on the standard mirror or pole cam viewing equipment. The system is a body mounted control panel that allows the operator to choose from a series of sensing devices at the end of an energized pole.

TRVS-1, the Wolf Pack, is a durable, all-weather capable control pack with a near IR and high-resolution camera head. It can be assembled in a heavy rain/snowstorm. The screen is large enough to get a true picture of what the system is seeing. It is lightweight and the operator can quickly disconnect and become an active team member if needed without having to worry about damaging the unit. The monitor is either chest or back mounted on a harness. The manual remote camera head is water proof to 165 feet and comes with a “Bullet Proof Warranty” i.e. if it is damaged by a bad guy during a real world mission a letter head or newspaper clipping gets you a new one at no cost. It also comes with the first 2-year warranty I have seen.

TRVS-3, the Under Door Viewer, can be attached to the pole and moved into position from an extended distance or hand placed into position. This can be done from extend position behind a ballistic shield. It is also waterproof and is not an optical fiber cable but a new type of video technology, which can accommodate night vision attachments.

Sciax also has an adapter, the TRVS-4 TecCam, which connects the TRVS-1 to a rigid or flexible boroscope.

About the author: Mario Martinez Jr. is the CEO of HRT Training Corp Inc., and has been a full-time law enforcement officer for the last 24 years, most of which have spent assigned to Special Operations Divisions as a tactical line officer, entry team leader, and current tactical commander. Mr. Martinez is certified under the Florida Criminal Justice and Training Commission (CJSTC) as a law enforcement instructor. Most recently, he has been certified through Eastern Michigan University as a SWAT Hostage Rescue and Advanced Hostage Rescue Instructor. He currently holds dual certifications as a Chemical Agents and Low-Lethality Impact Weapon Instructor status through Smith & Wesson Training Academy and DEFTEC, Inc. 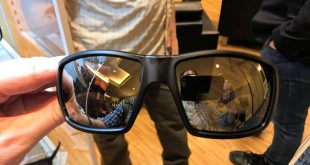