Let me start off by saying that DefenseReview would never in a million years recommend any less-lethal weapon as a stand-alone carry alternative to a combat-reliable defensive/tactical-grade firearm. However, after carrying around a TASER X26 for the last several months as an adjunct/back-up to my trusty carry Glock 19 (G19) high-capacity compact 9mm pistol, I can recommend it as that–an adjunct/back-up weapon to your open-carry or concealed-carry pistol(s).
The TASER X26 is a compact and ergonomic less-lethal weapon that puts out a whopping 26 Watts of T-Wave-producing power that, when fired/activated, completely overrides/jams a human being’s central nervous system to disable that human being and stop all hostile action, immediately. This page describes the X26’s disabling mechanism in more detail. According to the company, the Taser X26 offers even greater stopping power than the its predecessor, the TASER M26, even though the X26 is 60% smaller and lighter than the M26. TASER International developed the X26 to lighten the patrol officer’s full-time carry load.
TASER International classifies the X26 as an…

EMD weapon. "EMD" stands for "Electro-Muscular Disruption". The X26 utilizes Shaped Pulse™ Technology that, according to the company, "uses a highly refined energy pulse that concentrates a small portion of energy to first penetrate the barrier, while the majority of electrical charge is held in reserve, flowing freely through the barrier once the leading edge has penetrated".

The following is Taser International’s Technical Description of how the X26’s Shaped Pulse™ Technology works:
"The Shaped Pulse is comprised of two pulse phases:
The first phase, called the “Arc Phase” is optimized to generate a very high voltage to penetrate clothing, skin or other barriers. The “Arc Phase” is a very high voltage short duration pulse that can arc through up to 2 inches of clothing or barriers. Once the arc is created, the air in the arc is ionized and becomes a low impedance electrical conductor that conducts the second pulse phase into the body.
The second phase of the Shaped Pulse is the stimulation phase, or “Stim Phase.” The Stim Phase does not have to arc across a barrier, since this was accomplished by the Arc Phase. The Stim phase only has to flow across the highly conductive arc from the Arc Phase. Hence, the Stim Phase is optimized to provide maximum incapacitation for a human target while operating at super-efficient power levels. 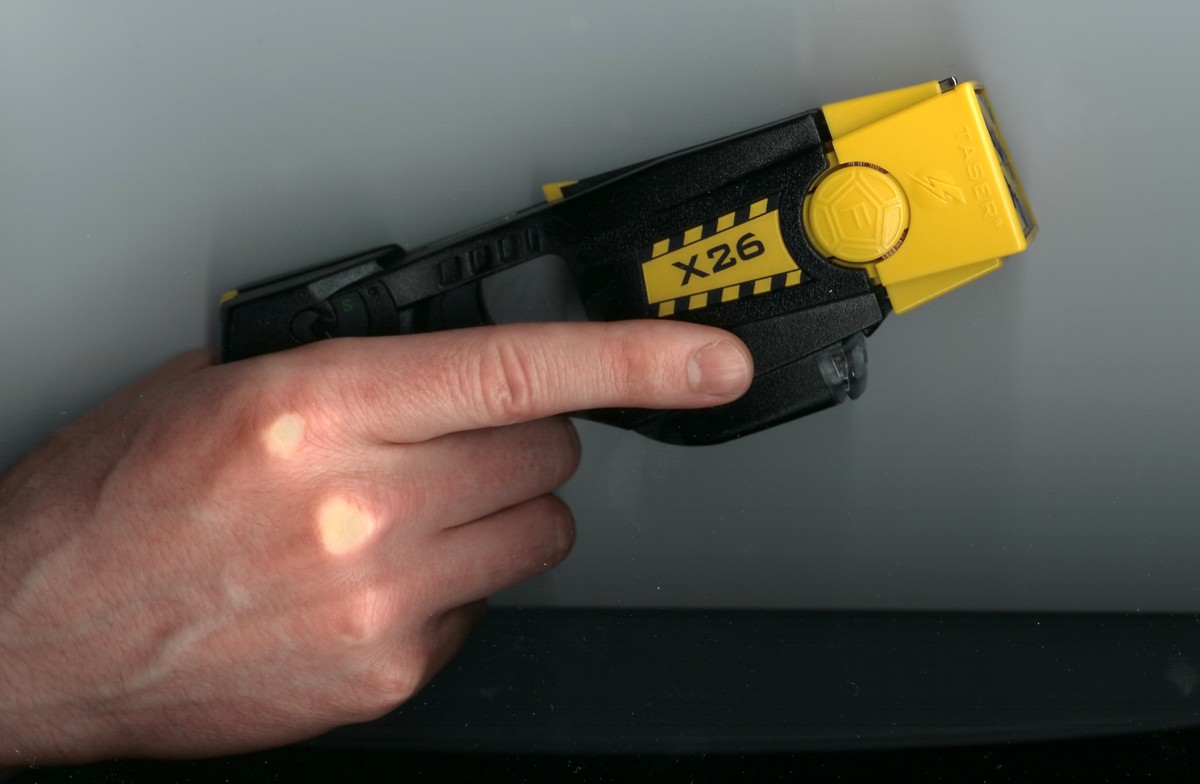 The timing is so fast that to most electronic instrumentation, and all human observers, the Shaped Pulse appears as just one output pulse (arc). The result of Shaped Pulse EMD Technology is a high-performance, highly efficient less-lethal weapon with an incapacitating effect that’s 5% greater than even the vaunted M26, in a weapon that is 60% smaller, 60% lighter and consumes 1/5th the power.
In order to optimize the Shaped Pulse Technology that made the X26 possible, our development team first needed to develop a tool to quantify the Electro-Muscular Disruption (EMD) effect of the original M26. That tool is a proprietary bioresponse rating scale known as MDU’s, or Muscular Disruption Units. MDU’s quantify the amount of incapacitation cause by a pulsed energy weapon. Since the M26 is well established as the superior standard in less-lethal incapacitation, the effect of the M26 is defined as 100 MDU’s. In the final development, the X26 was tuned to operate at 105 MDU’s, or 5% above the M26."
The TASER X26 incorporates an integral targeting laser and tactical white light, making the X26 just as effective at night as it is during the day. When the safety is flipped off with an upward thumb motion, the targeting laser and white light go on automatically, and the weapon is armed/activated. The X26’s integral targeting laser is very bright, easily visible, and fast to acquire, even in daylight. The integral tactical white light is bright enough to light up a hostile subject adequately for targeting in total darkness. 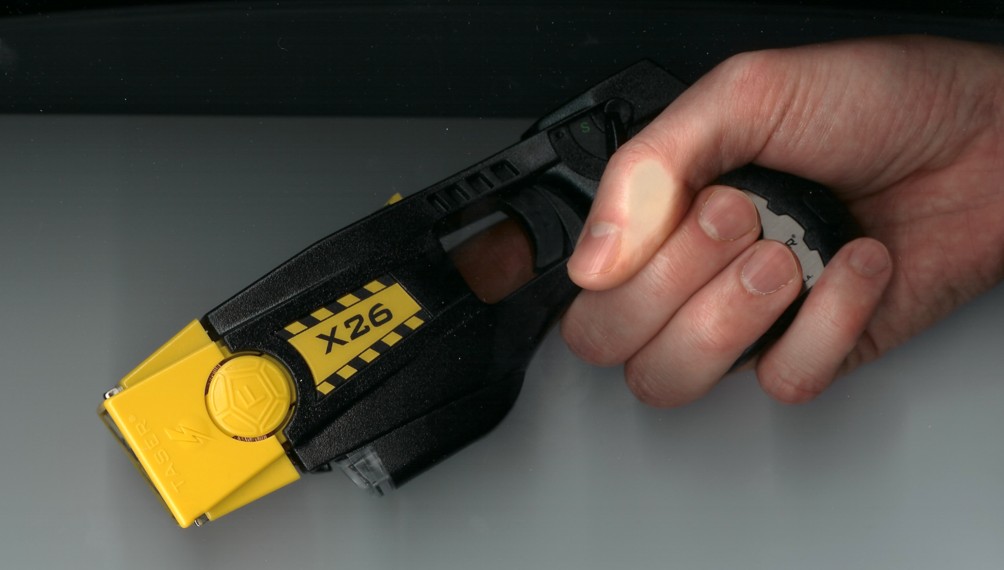 The Taser X26 that DefenseReview received came with a number of XP Penetrator Cartridges that feature longer penetrating needles than standard and offer a 21 ft. range. The longer penetrating needles allow the XP Penetrator Cartridge to penetrate thicker/heavier clothing than the standard Police Pack Air Cartridge, which also has a 21 ft. range.
I have to say that I’ve really enjoyed carrying the Taser X26 around with me as a back-up to my Glock 19 (G19). I like the X26’s compact and lightweight envelope, and it’s ergonomics are perfect for my hands. I’ve also come to really appreciate having a less-lethal defense option with me, to back up my firearm. It’s actually very comforting knowing that I can completely disable an attacker quickly and easily without having to use lethal force, and without having to resort to hand-to-hand combat.
My personal belief is that if you can handle a hostile situation without having to resort to deadly force, that’s always the best way to go, provided you can do so confidently and without being seriously injured. That said, I must re-iterate that I don’t advise the use of a TASER X26, TASER M26, or any other less-lethal weapon as a primary/stand-alone defensive weapon. I only recommend the TASER X26 as a back-up to one’s open carry/duty or concealed-carry firearm.
All TASER X26 System packages come with an ambidextrous eXoskeleton holster system, a Digital Power Magazine (DPM), instructional CDROM, Target, and operating manual. The TASER eXoskeleton holster system is a pretty trick/well-designed polymer holster that has good retention qualities.
DefenseReview hasn’t yet had the opportunity to test the TASER X26 and its XP Penetrator Cartridges out on live targets yet, but that doesn’t mean we’ve stopped looking for (controlled conditions testing) volunteers. We’ll keep you posted. In the meantime, we’ll have to rely on the X26’s operational performance record.
TASER International, Inc. can be contacted by phone at 480-905-2000, or toll-free at 800-978-2737. You can contact them by email at [email protected].
Click here to see a hi-res JPEG of DefenseReview’s sample TASER X26 (right-side view) with the TASER XP Penetrator Cartridge attached.
Click here to see a right-side view of DefenseReview’s sample TASER X26 being gripped (XP Penetrator Cartridge is attached).
Click here for a left-side view of DefenseReview’s sample TASER X26 being gripped (XP Penetrator Cartridge is attached).
Click here to read a "Police Magazine" article on the TASER X26.
TASER X26 Less-Lethal Weapon for Police/LE 1st Responders by David Crane

David Crane started publishing online in 2001. Since that time, governments, military organizations, Special Operators (i.e. professional trigger pullers), agencies, and civilian tactical shooters the world over have come to depend on Defense Review as the authoritative source of news and information on "the latest and greatest" in the field of military defense and tactical technology and hardware, including tactical firearms, ammunition, equipment, gear, and training.
Previous TidalForce M-750 Motorized Mountain Bike for Military Ops and LE Patrol
Next Springfield Armory X-Treme Duty (XD) Pistols: Tactical and Sub-Compact