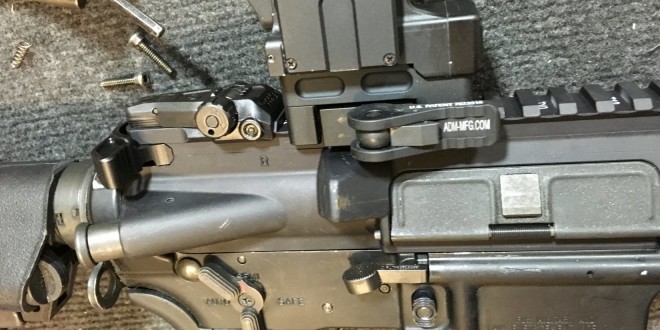 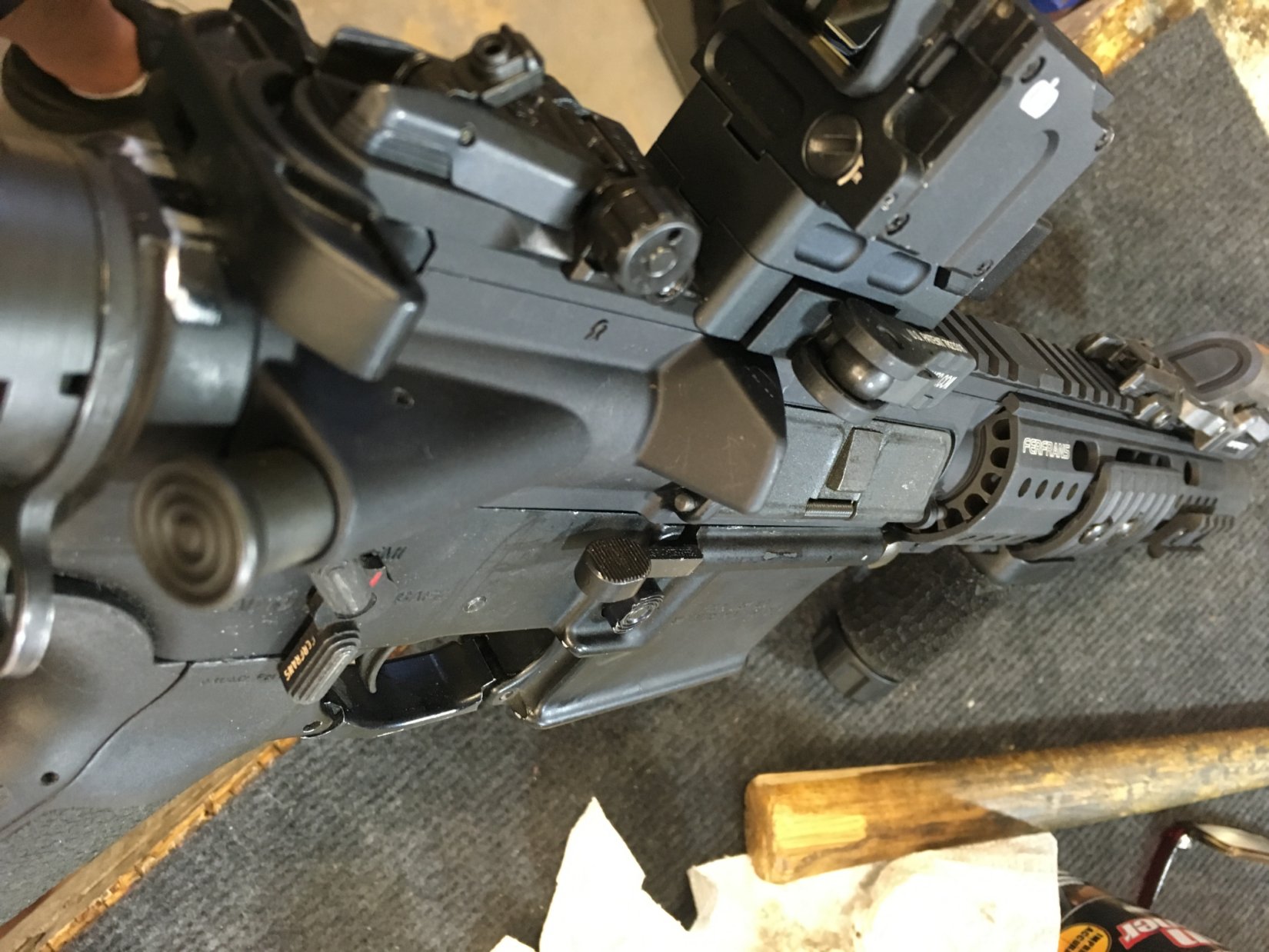 One of the things DefenseReview (DR) loves so much about the tactical firearms business is that some of the smallest things can make your life easier and better, and allow you to perform better and faster. Even better, often these things can come from the minds of small-town inventors. The PDQ Ambi-Bolt Release (ABR) ambidextrous BCG (Bolt Carrier Group) catch/release button/lever, from Teal Blue Bravo LLC (TBB), would appear to be just one of these very things. With a minimum of machining or dremeling, you can integrate the PDQ Ambi-Bolt Release into any standard/MILSPEC AR (AR-15) lower receiver, and bring your tactical AR rifle/carbine/SBR (Short Barreled Rifle) one major step closer to being fully-ambidextrous and much faster and easier to clear when you have a serious malfunction.

Of course, to make your gun (AR) fully-ambidextrous, you must of course also add an ambi-safety/selector switch and ambi-mag (magazine) release button, but we’ll get to those later. Let’s stay on topic. What’s particularly interesting about the TBB PDQ Ambi-Bolt Release is it’s design and orientation, which is horizontal rather than vertical like the “ping-pong paddle” on the other side. DR recently reported on the new Lewis Machine & Tool (LMT) ambi-lower receiver on the LMT Defense MARS-L (Modular Ambidextrous Rifle System-Light), that incorporates an ambi-BCG catch/release button/lever into the design. The LMT ambi-bolt catch/release is oriented the same way as the standard bolt catch/release on the left side, i.e., vertically. You just have to buy the entire lower receiver to get it. If you don’t want to have to do that, the TBB PDQ Ambi-Bolt Release is an excellent alternative. 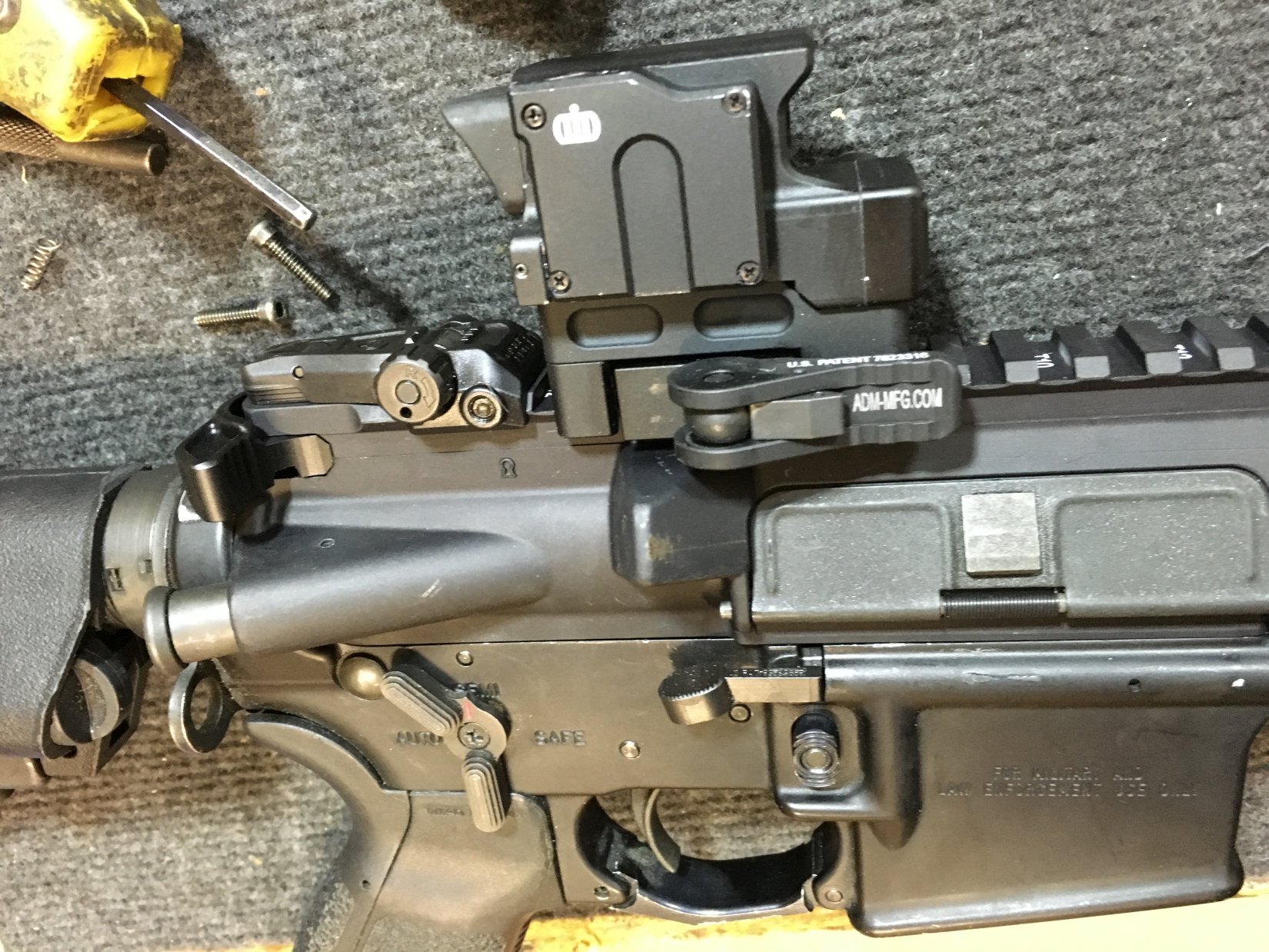 Defense Review is really looking forward to T&E’ing and reviewing the PDQ Ambi-Bolt Release out as soon as we can. In the meantime we can report that our friends at FERFRANS Specialties have already tested it on their guns, and are impressed enough with it that they’re going to incorporate it on all future Ferfrans guns. 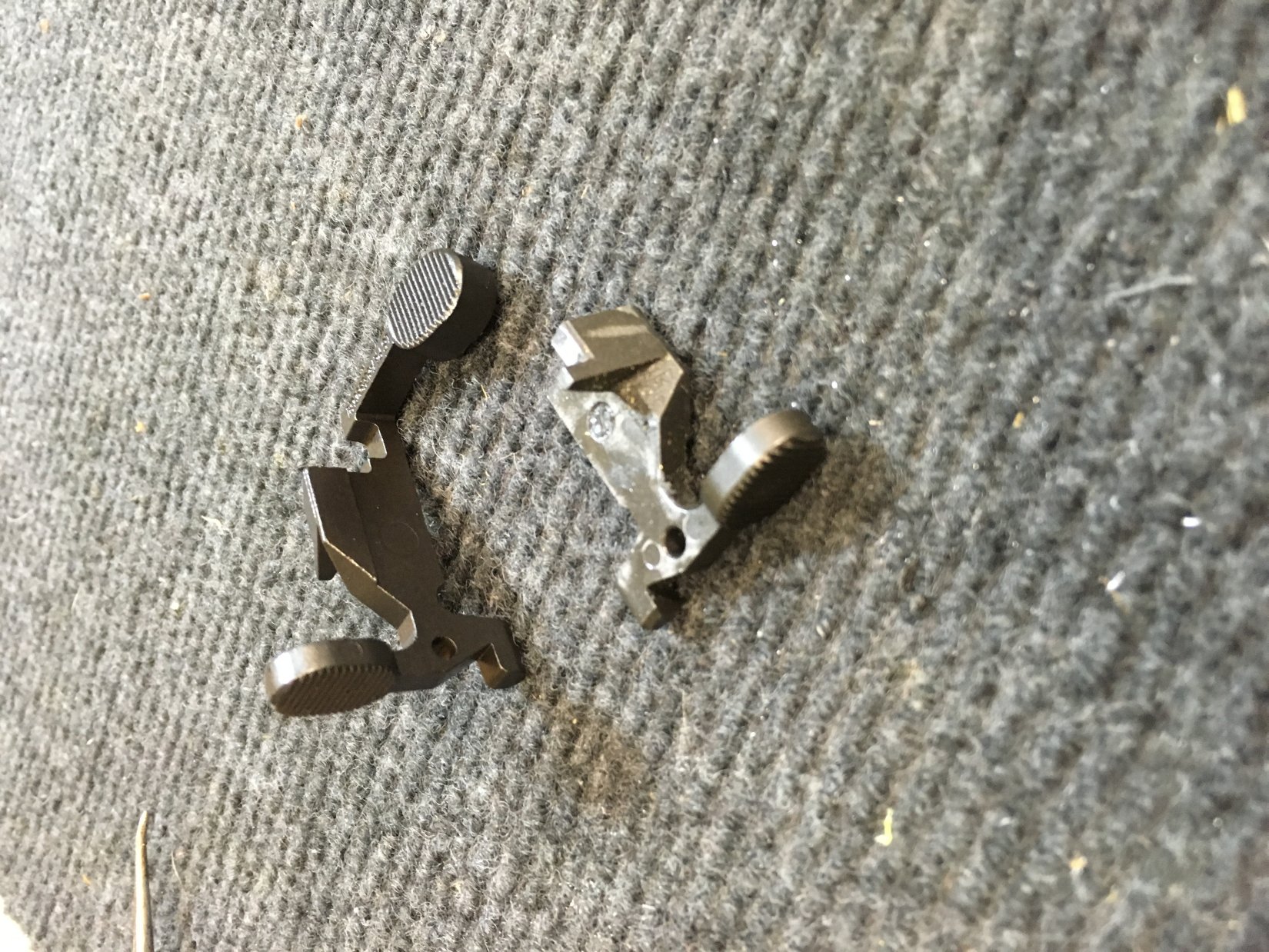 That’s BIG, when you consider that FERFRANS guns are select-fire/full-auto, and designed to be run on full-auto at high round count under adverse combat conditionss.

It should be noted that Ferfrans President/CEO Ferdie Sy is notorious for testing all new/experimental tactical AR components on full-auto to try to determine their failure point. If a product has a design or manufacturing defect (or defects plural), Ferfrans is likely to discover it very quickly. So, the fact that FERFRANS has signed off on the PDQ Ambi-Bolt Release as GTG (Good-To-Go) is a big deal to us. That said, we still want DR writer/contributor and chief new-product tester Jeff Gurwitch to run it on one of his guns, and get his thoughts on it, as well.

Editor’s Note: DR also spoke with Teal Blue Bravo owner/operator Bill Brotherton yesterday, and we had a great conversation with him. He came across as a really down-to-earth, nice guy. So, we like that, too. 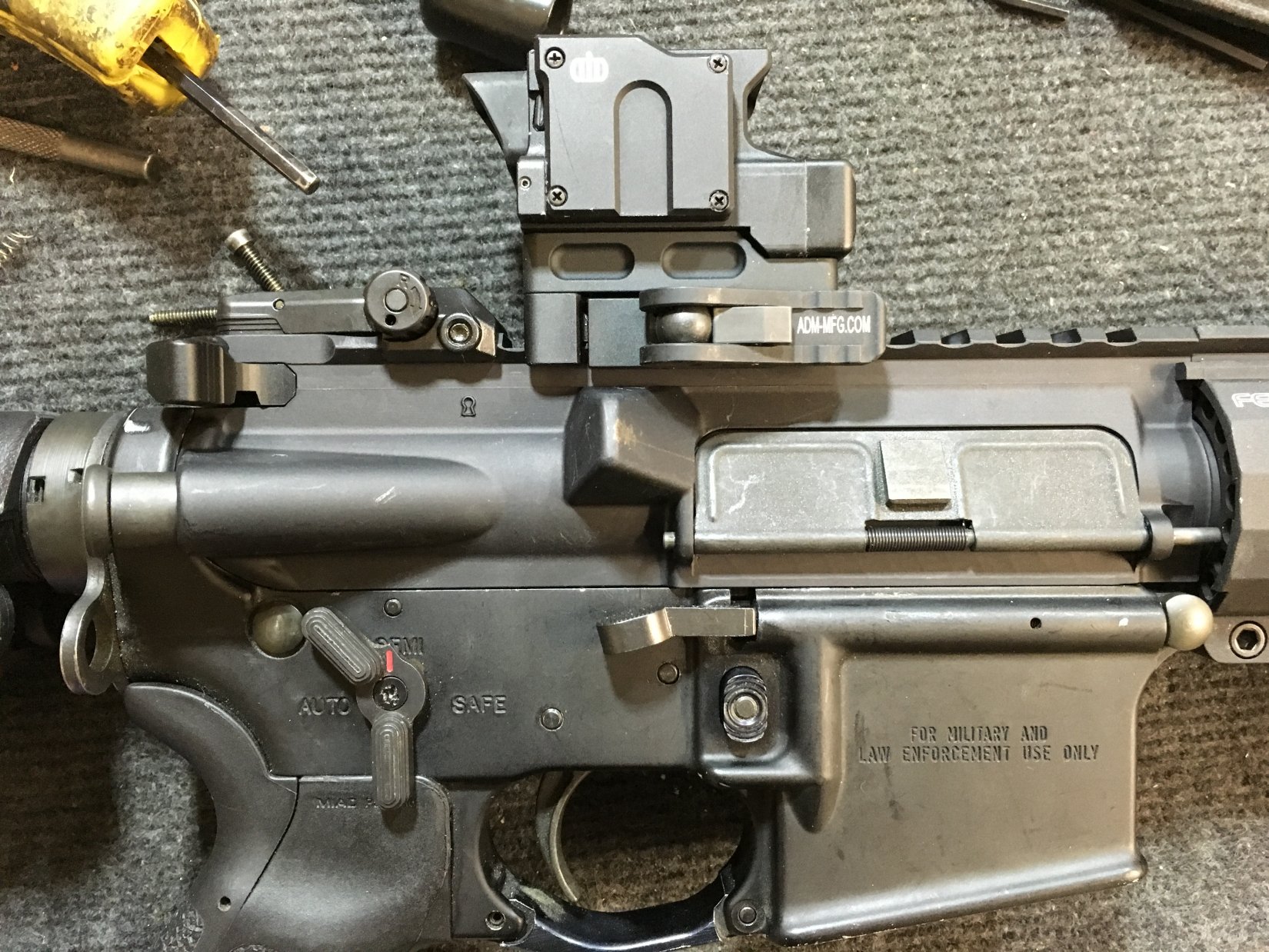 “PDQ Ambi-Bolt Release™
The new PDQ Ambi-bolt release™ puts the operator in control of the firing grip at all times. The trigger finger moves from trigger to mag release to bolt release smoothly without moving the weapon from the shoulder. That is why it is call PDQ (pretty dam quick). When seconds count and your life and others are depending on you. Count on PDQ The PDQ Ambi-Bolt Release™ Release is made in AMERICA, uses Military grade steel, hardened and Mil Spec 8526 Class 3 type 2 coated to last a life time of operational conditions.

Clearing a Double Feed with PDQ Ambi-Bolt Release™
While an advantage in firearms reloads, the PDQ advantage when clearing a double jam on the weapon is amazing. When a rifle malfunctions due to a double feed, the shooter will typically move the left hand to the bolt stop release and the right hand is now needed to activate the charging handle. This action is neither smooth or quick. Using the PDQ will allow the shooter to clear most double feed jams without ever removing his hand from the shooting grip. This action is not only faster but also more familiar. Whether in a competition or in a fight for your life the PDQ adds speed and reliability.

TEAL BLUE BRAVO LLC Located in Florida, Teal Blue Bravo LLC. is a custom shop specializing in firearms modifications for competitive shooters. Our focus is on firearm improvement and function, with the goal of making firearms easier to operate.

Owner/operator Bill Brotherton has over 45 years of designing and gunsmithing experience. After a six year apprenticeship with a Master German Gunsmith, Bill went on to become the first American trained to work on Perazzi shotguns. In a sport where every shot counts, he learned the value of function, reliability and a competitive edge. Now, after nearly 50 years of building custom guns for competition shooters of every discipline, he is using the knowledge gained to bring you the new PDQ. A veteran of the US Armed forces Bill’s experience from his military service has focused the companies efforts on the need for ease of operation. In close encounters of the worst kind. The need for speed is critical.”