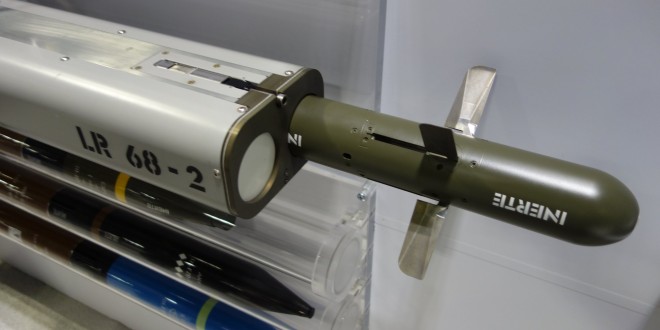 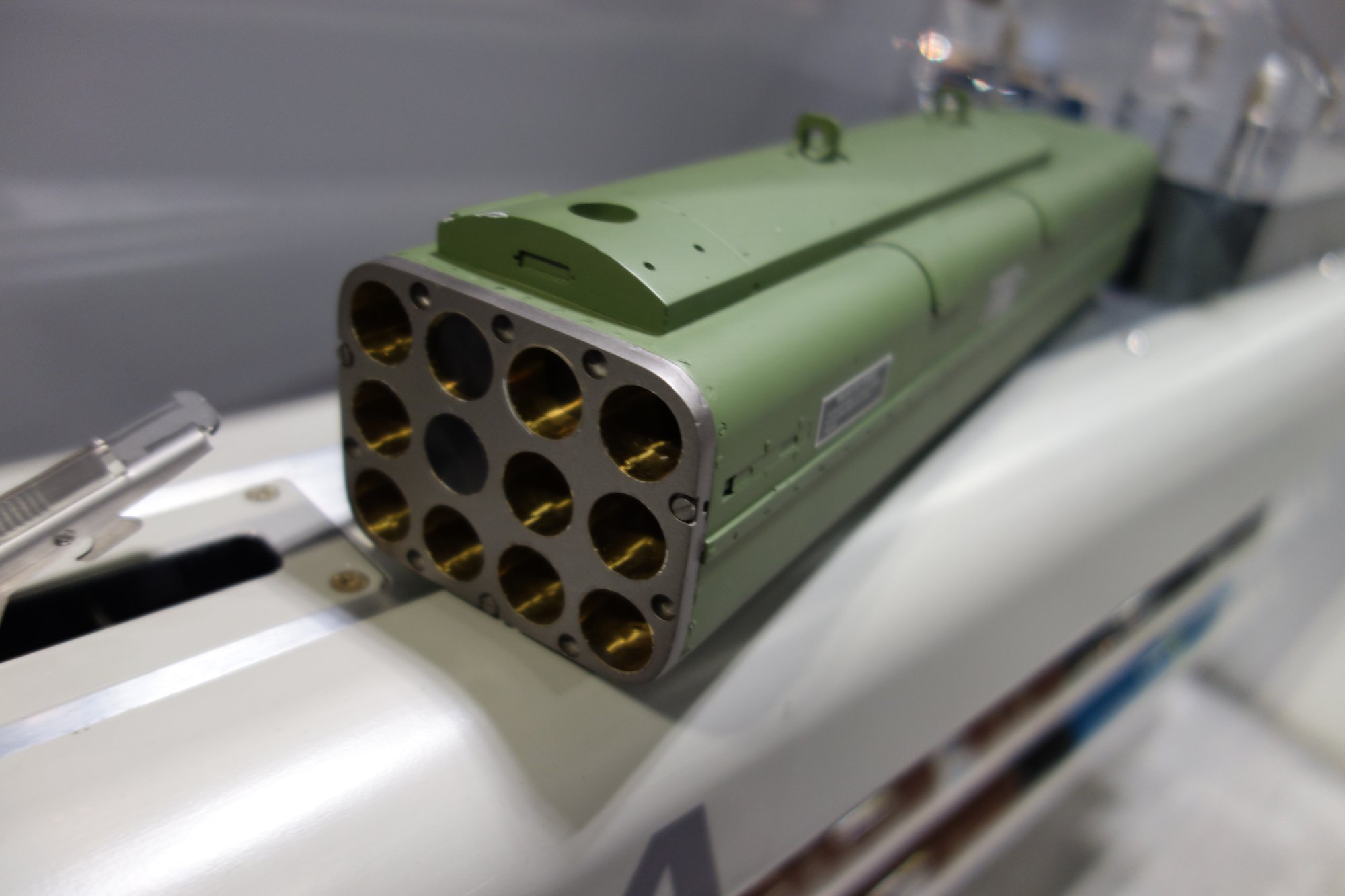 Thales Defense subsidiary TDA Armaments SAS appears to have designed and developed one hell of a 2.75″ (2.75-inch)/70mm wireless laser-guded rocket called the Induction Laser Guided Rocket (ILGR), also known as the Sub-Metric Precision Rocket (SMPR), or Roquette à Précision Métrique (RPM) in French. DefenseReview (DR) recently came across the ILGR at the company’s booth at NDIA SOFIC 2015 (Special Operations Industry Conference 2015). The ILGR/SMPR’s two primary unique features are its induction coils inside the rocket and launcher, and the ACULEUS LG warhead, which limits the lethality radius to well under 20 meters, so anyone 20 meters or more out (away from the target) is completely safe.

You can load and lock an ILGR/SMPR laser-guided rocket inside the Telson digital rocket launcher in seconds. Once you do so, the respective coils inside the rocket and launch tube link up. There’s an electronic board with a micro-controller inside the rocket. “When the soldier presses on the trigger to fire the rocket, the micro-controller inside the ammunition will receive the energy, detect the data, encrypt the data, and if everything is o.k., we can start the rocket motor. The rocket motor will push the rocket, and the rocket will [fire] on the [correct] trajectory,” says Thales Defense / TDA Armaments guided rocket program manager Matthieu Krouri. 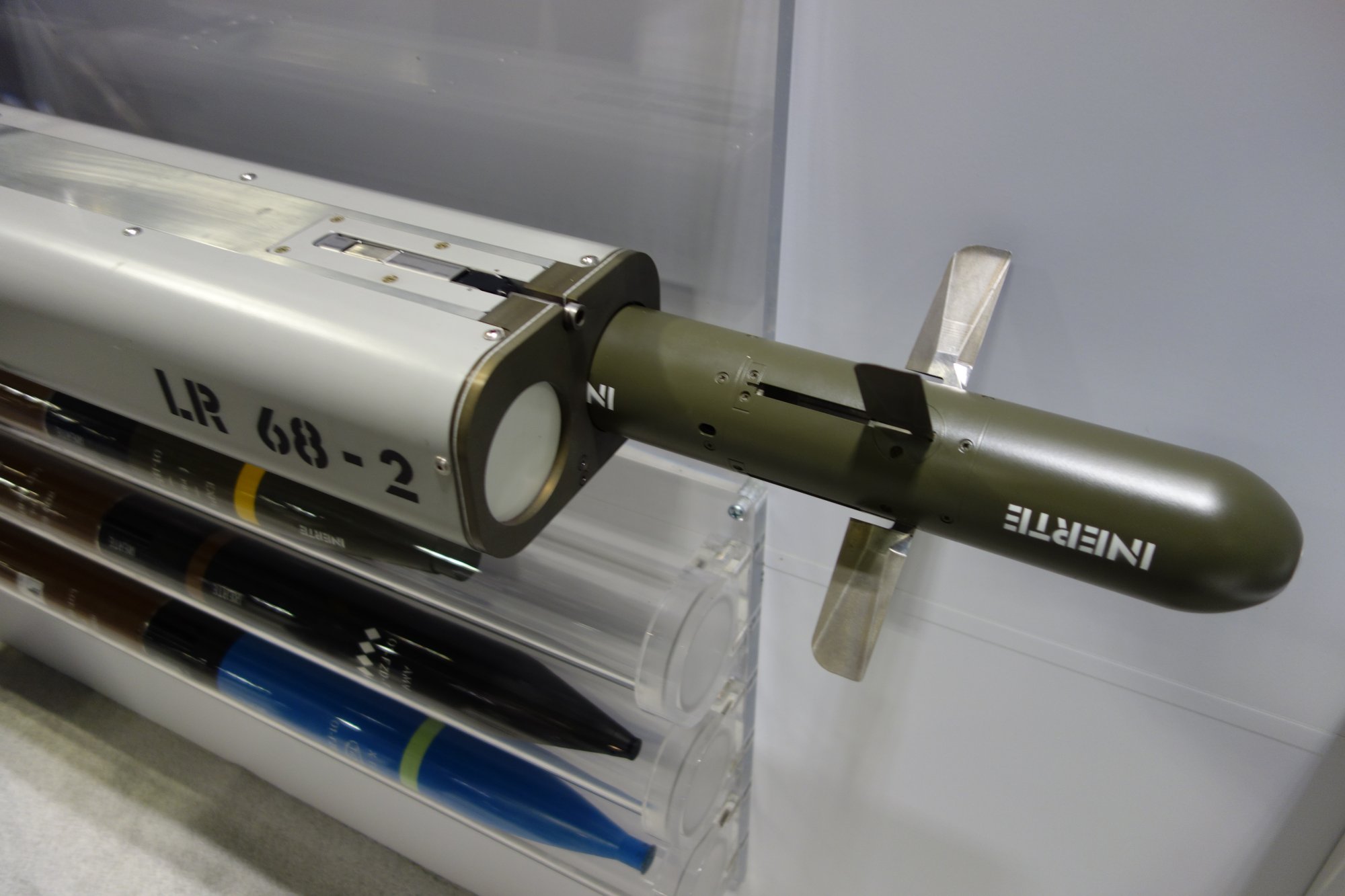 Krouri continues, “In this case, we have a specific rocket [ILGR/SMPR] with a laser seaker on the front. Here you have the rocket with the fin open. The rocket receives, in flight, the laser codes, the range to the target, and when the soldier operates the rocket, the rocket goes out from the launcher. At Mach 2, it’s starting to look around, and if it sees a target on the laser code [i.e., a lased target], the fins open, and the rocket will go onto the target with sub-metric accuracy, so it’s below one meter, and at the impact, we have a low-collateral-damage warhead, which [generates] a bubble of destruction, and 20 meters from the point of impact is completely safe, [which is] a requirement of the French Army.”

While at the TDA Armaments booth, DR saw a 2-round launch tube for UAS/UAV/drone aircraft, and we also viewed and handled a mock-up of a Telson-12 12-round digital launcher. However, 8-round and 22-round Telson digital launchers are also available for the ILGR/SMPR. The 12-round launch tube was designed for helicopters, fighter aircraft, and other fixed-wing ground attack aircraft. 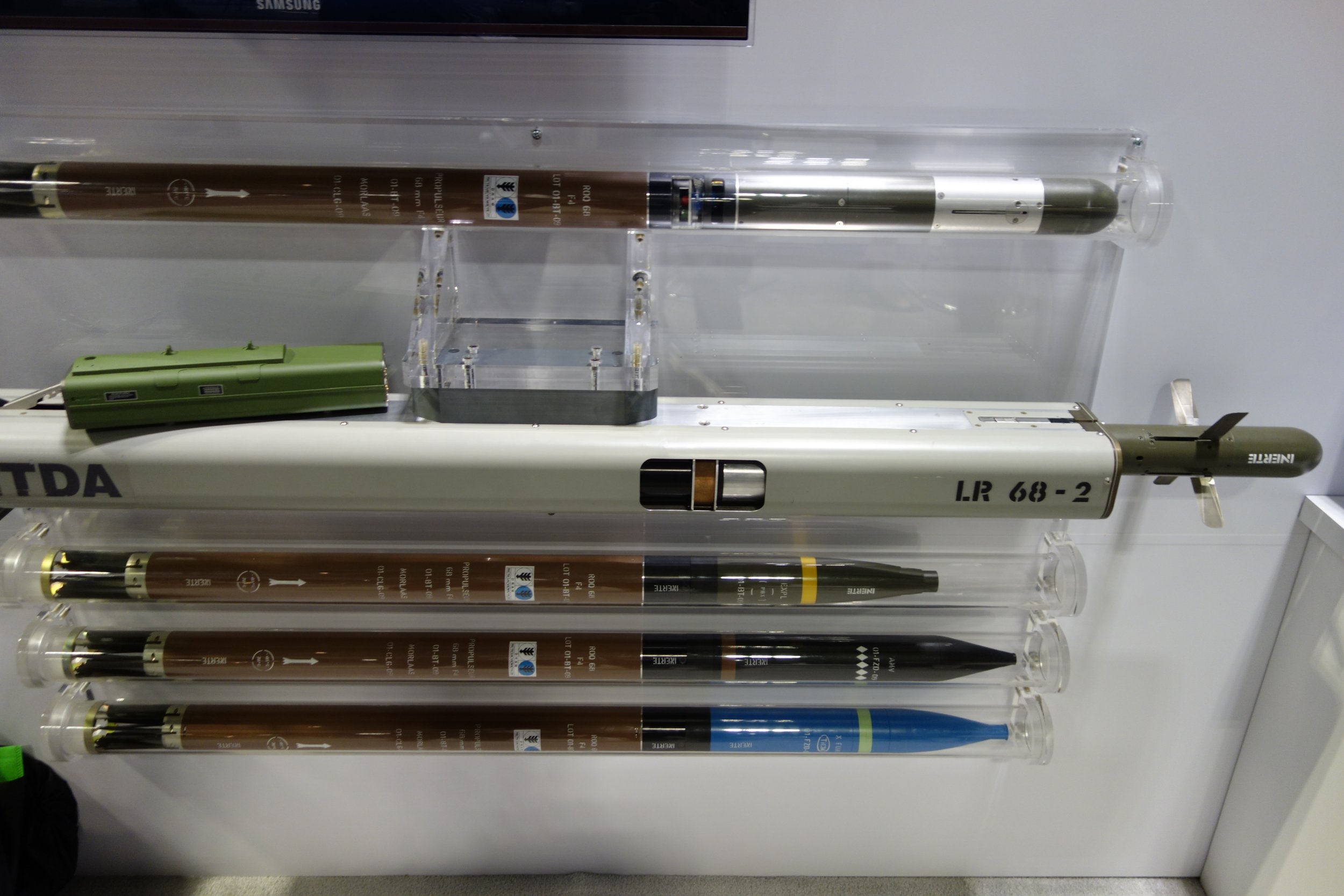 The TDA ILGR/SMPR (Induction Laser-Guided Rocket/Sub-Metric Precision Rocket) has already been operational in various theaters of operations, including Afghanistan and Mali, and is currently operational in Africa. According to Krouri, the ILGR weighs only 9kg versus 25kg for the Lockheed Martin HELLFIRE II missile (AGM-114), and is only 1/3rd the price of the HELLFIRE II.

The ILGR looks pretty badass in terms of its precision strike and kill capability, combined with its ability to significantly attenuate/mitigate (i.e., limit) collateral damage. This combined capability increases the probability that only the target and those in the IMMEDIATE PROXIMITY to the target are killed. So, if you don’t go hanging around with enemy combatants, or allow them to hang around you, you should be safe.

The following information on the ILGR and ACULEUS LG Warhead come directly from the TDA Armaments website: 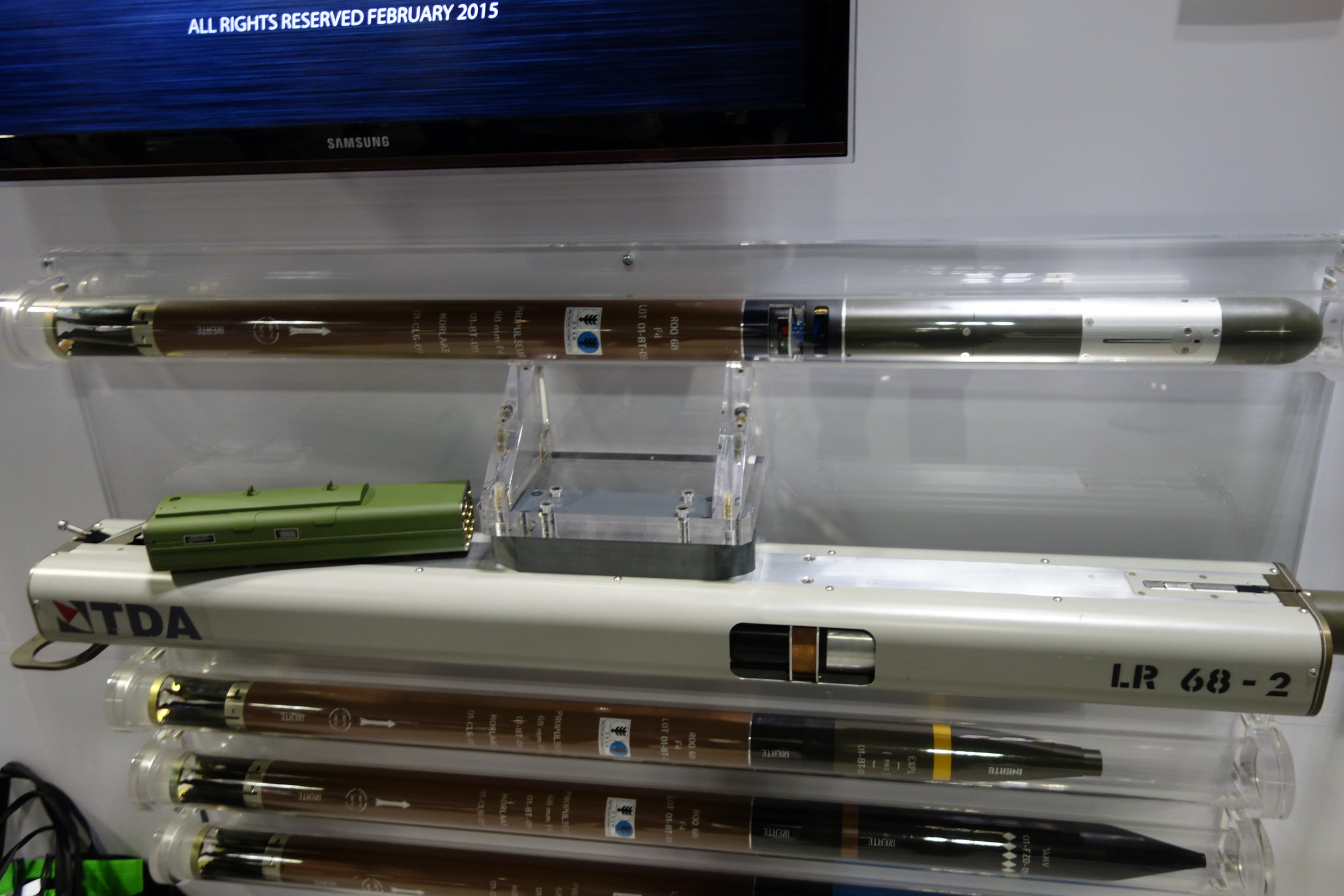 The Induction Laser Guided Rocket (ILGR) follows a ballistic trajectory for much of its flight until it receives a course correction order from the aircraft. After the ignition phase, which lasts about one second, the rocket flies for a few seconds and then corrects its course and guides itself onto the laser illuminated target.

The ILGR is fired individually on targets such as light vehicles and personnel on the move. An innovative type of warhead is used to minimise risk-estimate distance.

This rocket is not intended to replace air-to-ground missiles but offers army aviation units and air forces a real opportunity to mix and match their arsenal of air-launched weapons to neutralise or destroy targets using the most appropriate, most cost-effective projectiles available. 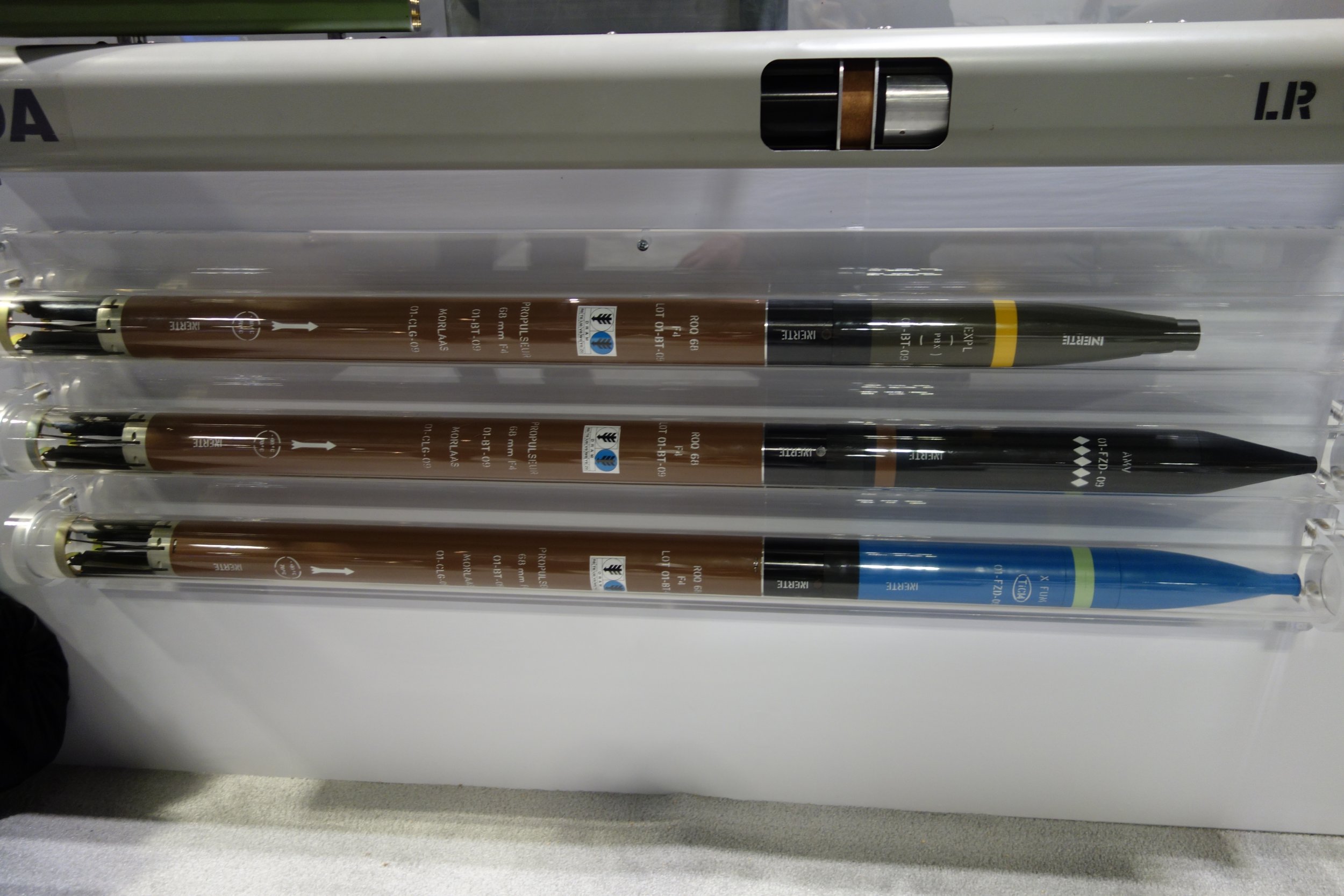 The ACULEUS LG warhead has been conceived to limit the collateral damages to a 20 meters radius. The projectile is able to destroy light vehicles of the pick-up type (and all the on board fighters) and to damage, or to neutralize, light armoured vehicules, static or on the move.

Able to be shot from all type of aircraft, the ILGR has to be considered as “an additional arrow in the quiver” , allowing (finally) to interveine with close fire support in the immediate vicinity of friendly troops in contact, as well as to the benefit of friendly fighters (and/or of hostages) imbricated with an adversary.

More important still, this new weapon could be employed in the framework of combats “within the population”, as well in strongly urbanized zone, in the heart of villages and the most isolated hamlets, or around sensitive installations, the destruction of which would engender humanitarian or environmental disasters.”

SATELLITE POSITION
North 48.43453°
East 2.16561°
© Copyright 2015 DefenseReview.com. All rights reserved. This material may not be published, broadcast, rewritten or redistributed without receiving permission and providing proper credit and appropriate links. If you are reading this article anywhere other than DefenseReview.com, please email us the website address/URL (where the unauthorized DR article reprint is located) at defrev (at) gmail (dot) com. Thank you.

MATBOCK VBSS Robot for Visit, Board Search and Seizure Ops: Maritime Magnetic Marvel Drives Up the Side of the Ship and Sets Your Grapnel Hook! (Video!)

David Crane started publishing online in 2001. Since that time, governments, military organizations, Special Operators (i.e. professional trigger pullers), agencies, and civilian tactical shooters the world over have come to depend on Defense Review as the authoritative source of news and information on "the latest and greatest" in the field of military defense and tactical technology and hardware, including tactical firearms, ammunition, equipment, gear, and training.
Previous Happy Independence Day from DR!: Have a Fun, Yet Safe, July 4th Weekend
Next Polaris Defense DAGOR Ultra-Light Combat Vehicle (ULCV): Air-Droppable/Transportable Weaponized Fast All-Terrain/Off-Road Fast-Attack Vehicle for Special Operations Forces (SOF) Missions