There's no doubt that geospatial information systems (GIS) have become an important component of network centric warfare (a.k.a. net-centric warfare). Military analysts/strategists, as well as those tasked with Homeland Security missions, have to be able to visualize geographic areas and correlate those pictures with relevant mission data/information. In the past, geospatial information, or geospatial intelligence, was displayed and presented in the form of paper maps. Northrop Grumman Mission Systems' ultra-cool TouchTable Immersive Collaboration System, billed as "the next step in advanced GIS collaboration", has changed all that. Now, military and Homeland Security analysts, planners, and strategists can manipulate images in real time, and thus better assimilate the geospatial information/intelligence that's presented. This will, hopefully, result in faster decisions through a better overall tactical and strategic understanding of the battlespace.

Just like you've probably seen in your favorite war movie, the Touch Table Immersive Collaboration System is oriented horizontally, so multiple people can gather around it, collaborate, and make informed decisions quickly. Unlike the aforementioned paper map tech, however, the geospatial information on the Touch Table's display can be quickly and easily manipulated with hand movements. A computer follows and interprets those hand movements and updates the projected map image accordingly. 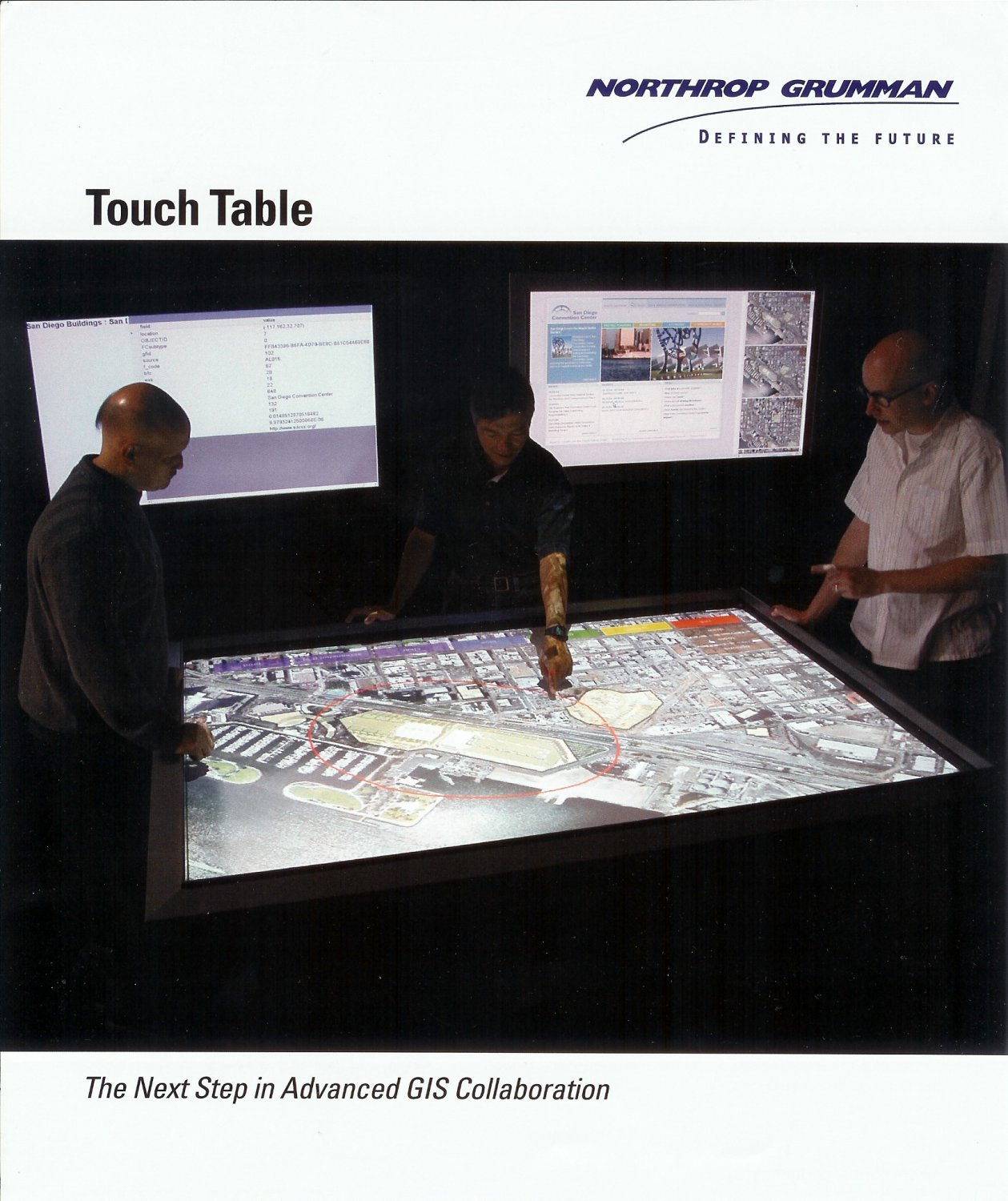 DefenseReview got a chance to try out the TouchTable at Northrop Grumman's booth at the exhibition portion of the 111th Annual International Association of Chiefs of Police (IACP) Law Enforcement Education and Technology Exposition in Los Angeles, CA, which ran November 13-15, 2004 at the Los Angeles Convention Center, and we were really impressed with it. DefRev was able to pan around to various geographic locations, zoom in, zoom out, etc. very quickly and easily. To pan, just move your finger across the map surface. To zoom in, move two of your fingers together. To zoom out, move two fingers apart. You can reorient the Touch Table's custom menu to any side of the table by touching the edge of the display/screen. You can even draw on the map, just like John Madden analyzing a professional football play. You can even select the color pen (virtual) you want to use for drawing. Pretty neat. The TouchTable was definitely one of the coolest and most interesting technologies at the show (IACP 2004, Los Angeles), in our opinion.

By the way, Northrop Grumman Mission Systems didn't develop the Touch Table by themselves. They had a little help from their teaming partner, Applied Minds, Inc. The TouchTable Immersive Collaboration System utilizes ESRI's ArcGlobe software, which is part of the ArcGIS family of products. Here's what ESRI has to say about ArcGlobe:
"With the release of ArcGIS 9, the ArcGIS 3D Analyst extension will introduce a revolutionary way to support multiresolution global data visualization in 3D using the new ArcGlobe application. This highly anticipated application allows users to view and analyze very large amounts of 3D GIS data seamlessly and with extremely fast display speeds. ArcGlobe literally presents a globe of the earth over which users can navigate easily in three dimensions. Users can "drill" quickly from a planetary view to a high-resolution close-in examination of whatever terrain on earth they choose and have access to the associated data tables.
'ArcGlobe provides real-time pan and zoom of very large (hundreds of gigabytes) of 3D raster, terrain, and vector data sets with no perceivable hesitation on standard PC hardware," says ESRI President Jack Dangermond. "This has been achieved by the introduction of a new approach for indexing and quickly retrieving data.'
ArcGlobe features include:
– Display multiresolution image and terrain data.
– Support vector data (e.g., points, lines, polygons, and 3D objects).
– Convert two-dimensional representations to 3D on the fly.

– Other features that are currently part of ArcGlobe include 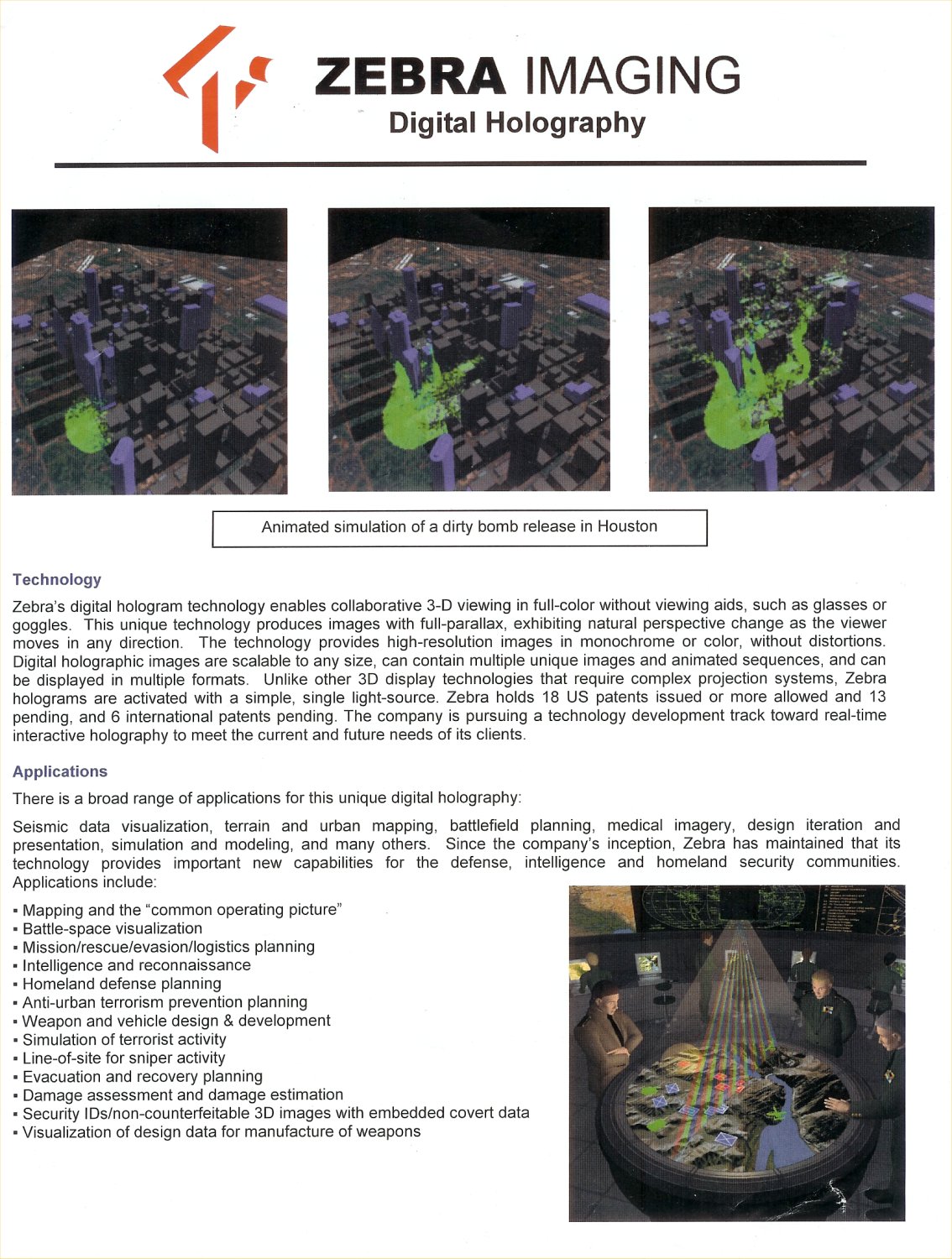 In addition, the support for 3D symbology further augments the realism provided by the ArcGlobe application. True 3D symbology allows the user to create maps that enhance scientific visualization and simulation. ArcGlobe will include style libraries to give the user a variety of real-world symbols from which to choose."
Now, that all sounds pretty good. But Defense Review would like to see the technology taken a step further by incorporating Zebra Imaging, Inc.'s Digital Holography into the system. Zebra Imaging's digital hologram technology REALLY blew us away at the 24th Army Science Conference (ASC 2004), which ran November 29 – December 2, 2004 in Orlando, FL. Zebra Imaging's digital holography tech (digital hologram tech) is HANDS-DOWN one of the coolest technologies DefenseReview has EVER seen or experienced. I mean, WHOAH. Getting to view and handle this tech was, by itself, worth the trip. Zebra Imaging is currently looking into the technology's potential federal sector (military, law enforcement, and Homeland Security, and general government) applications.

Here's what the company has to say about the technology:

"You've never seen anything quite like it. Zebra’s holographic images represent a dramatic leap forward in the science and art of three-dimensional imaging. Based on ground-breaking technologies developed over the course of fifteen years by world renown scientists, "Zebras" are today the most advanced, most unique, and, we believe, the most wildly dazzling 3D visualization tools in the world." 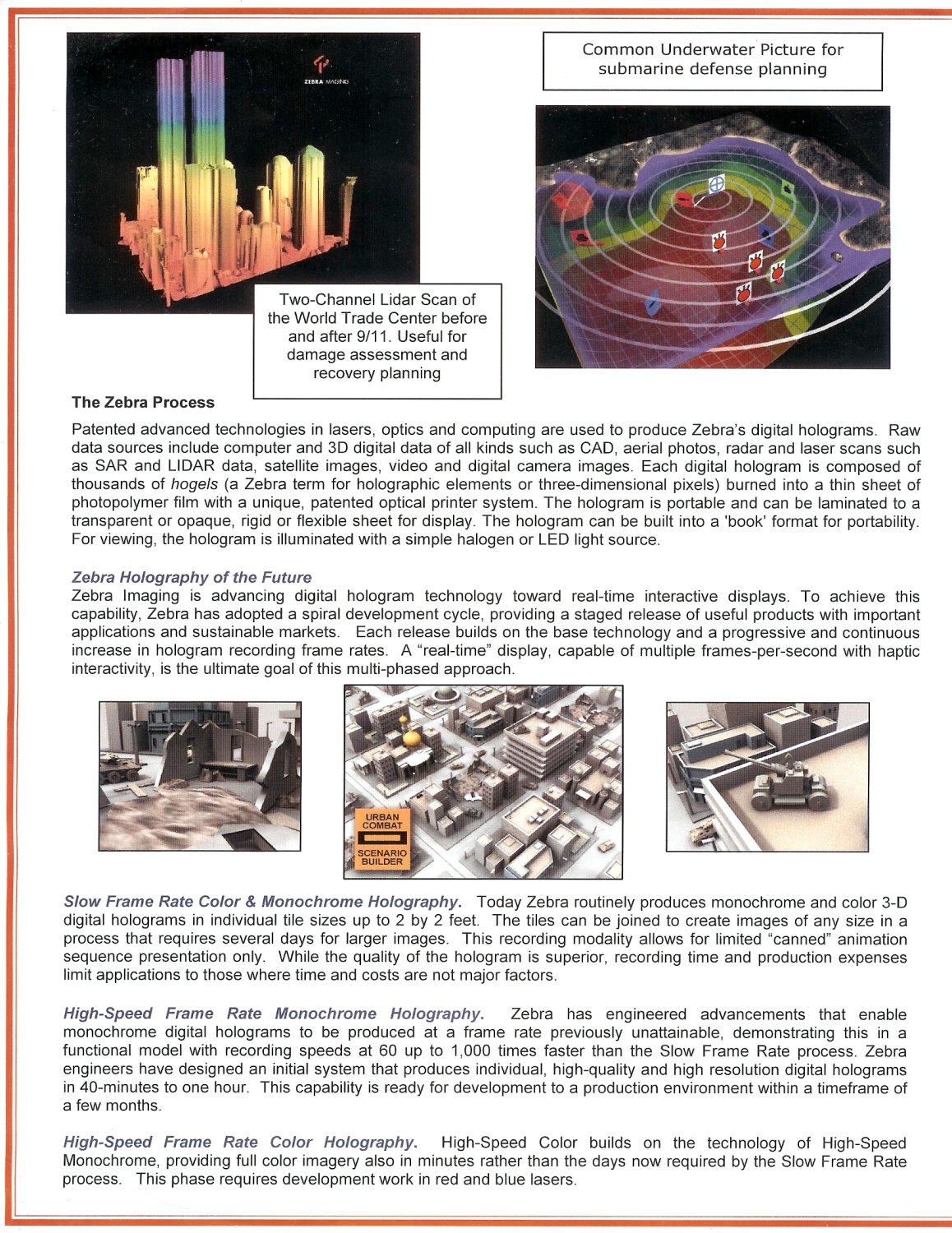 And, they're not kidding. The technology really is that amazing. Northrop Grumman's/Applied Minds' Touch Table Immserive Collaboration System and Zebra Imaging's digital holography, if combined, would create a battlespace analysis, planning, and strategy tool that would be nothing short of amazing/spectacular. The technologies could be used by everyone from military decision makers at the highest levels (inside the 5-sided building in Washington, D.C.) to military Special Operations Forces (SOF) before executing dangerous warfare operations (urban warfare, anti-terrorism/counterterrorism, desert warfare, jungle warfare, etc.). This technology integration (Touch Table with digital holography) would most likely prove to be a truly invaluable tool.

DefenseReview sees a future where war analysts, planners, and strategists walk into a large immersive room where the floor is one giant display/screen, and they can literally walk around/through a virtual holographic battlespace that can be updated instantly in real time according to up-to-the-second intelligence harvested from satellites, reconnaissance planes, and UAVs (reconnaissance drones).  An integrated head-mounted VR (virtual reality) component could also be incorporated into the system.  Battlefield use of unmanned aerial vehicles by infantry forces for fast and accurate battlespace intelligence/reconnaissance is becoming more and more widespread by the day, and can provide extremely fast up-to-the-second tactical battlefield intelligence that can be crucial for battlefield commanders in-theater.  Anyway, in order for this advanced type of virtual immersion technology to become a reality, the Zebra Imaging will have to figure out how to make the digital holographic images (digital holograms) quick-rewritable.  Perhaps there's even a way to make the whole system mobile (and thus easily tranportable) to the actual field of operations.

Now, just in case that's not enough, and you've still got some money left over to burn, DefRev recommends that you give the good folks at Accenture Technology Labs a call and acquire one of their Interactive Walls, for the geospatial information systems (GIS) and multi-source data analysis technology trifecta. What's an Interactive Wall, you ask? Think "Minority Report" (2002). Remember how Tom Cruise's character, stood in front of that big transparent screen in the Precrime Analytical Wing at police headquarters, performing his ubercool operatic, orchestra-conductor-like hand ballet to quickly sift through lots of digital data? Well, there ya' go. It's our understanding that the Accenture Interactive Wall currently uses touch-screen technology (unconfirmed/unverified), but Raytheon is currently working on a Minority Report-style glove interface system that mimics the movie technology exactly. That's right, the future is here, folks. So, buckle up. By the way, the Accenture Interactive Wall was developed by Kelly Dempski, and it looks like Kelly did a bang-up job.
If you'd like to get more info on the TouchTable Immersive Collaboration System, we suggest you contact Sean Love at Northrop Grumman Mission Systems (NGMS) by phone at 703-633-2805, or by email at [email protected].
Click on the links below to view the TouchTable Fact Sheet (click on photos to view them full-size):
Touch Table Fact Sheet (Front)
Touch Table Fact Sheet (Back) – This is the side with all the info.
Click here to view the Touch Table Fact Sheet in PDF file format.
You can contact Applied Minds, Inc. by phone at 818-545-1400, or by fax at 818-244-0204. Bran Ferran is Applied Minds' Co-Chairman and Chief Creative Officer. Danny Hillis is Co-Chairman and Chief Technology Officer.
ESRI can be contacted by phone at 800-447-9778, or by fax at 909-307-3049, in case you'd like to get more info on ArcGIS or ArcGlobe.
You can contact Zebra Imaging, Inc. headquarters by phone at 512-251-5100, or by fax at 512-251-5123. Ask for Dr. James Gardner (Vice President of Federal Sector). You can email Dr. Gardner directly at [email protected].
Click here to learn more about the federal sector/government applications for the Zebra Imaging digital holography (digital hologram) tech.
Click on the following links to read the Zebra Imaging Fact Sheet/Information Sheet (Click on photos to view them full-size, so you can read them.):
Page 1, Page 2, Page 3, Page 4
If you'd like to learn more about the Accenture Interactive Wall, you can contact Accenture Technology Labs by phone at 312-737-8842. Ask for Kelly Dempski.
Click here to read an abstract/white paper on the advantages of Interactive Wall Maps. The paper is titled "Augmenting Interactions with an Interactive Wall Map", and it was written by Joseph F. McCarthy, Xuehai Bian, and Venkatasubramanian Ramachandran.
Northrop Grumman TouchTable + Zebra Imaging 3D Digital Holographic (Digital Hologram) Technology + Interactive Wall Tech = Better Warfare Ops by David Crane

David Crane started publishing online in 2001. Since that time, governments, military organizations, Special Operators (i.e. professional trigger pullers), agencies, and civilian tactical shooters the world over have come to depend on Defense Review as the authoritative source of news and information on "the latest and greatest" in the field of military defense and tactical technology and hardware, including tactical firearms, ammunition, equipment, gear, and training.
Previous Zensah Tactical Apparel for Special Operations Forces: Anti-Thermal/IR Camo?
Next Systema AR-15/M16-Based Force-On-Force Training Weapons for Mil/LE Operators