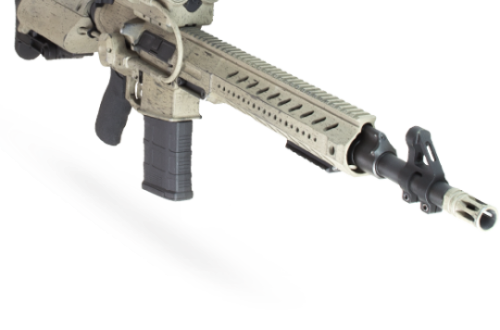 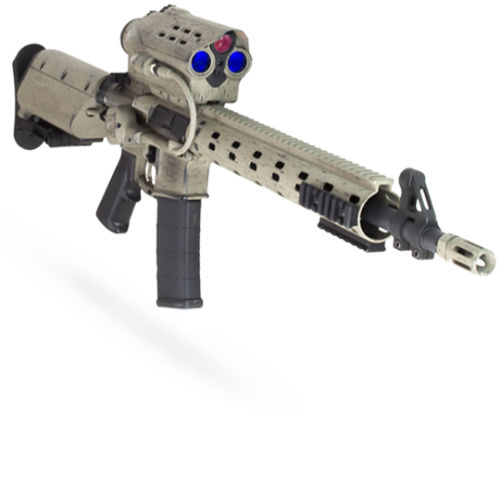 DefenseReview (DR) has been covering TrackingPoint’s RapidLok Target Elimination and Fire Control System and precision rifles since SHOT Show 2013. In fact, TrackingPoint’s Electronic targeting scope and precision-guided rifle packages were the very first products we covered from that show, and we did two articles on the products from just that one show (see here and here).

So, TrackingPoint’s press release offering ten (10) “zero-cost systems to any organization that can take the guns into the fight against ISIS/[ISIL]” really caught our attention today. The systems in question consist of the TrackingPoint M600 SR 5.56mm Service Rifle and/or M800 DMR Squad-Level Precision-Guided 7.62 (Squad Designated Marksman) tactical AR-format “Military Squad-Level Precision-guided Firearms” (SQLPF’s a.k.a. PGF’s), which utilize TrackingPoints proprietary RapidLok Target Elimination and Fire Control System to get the shooter/operator’s total time-to-kill (TTK) down to approximately 2.5 seconds. The RapidLok electronic target acquisition system automatically acquires and tracks the target as the shooter pulls the trigger, and since the electronic combat optic/tactical scope employs image stabilization, he can make off-hand shots as easily as if he were shooting supported. 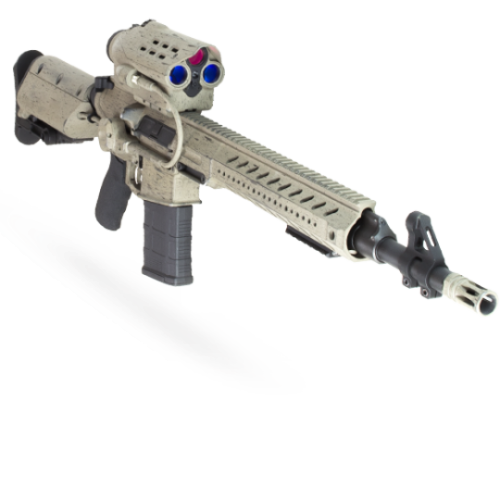 Here’s how the TrackingPoint literature describes some of the technical aspects of the technology: “RapidLok™ has an auto-snap feature that automatically adjusts point-of-impact to target center of mass. Also, target velocity is instantly measured and contemplated in the launch solution. RapidLok™ incorporates a laser-based Barrel Reference System that ensures shot-to-shot perfect zero eliminating error from shock, vibration, or environmental changes such as temperature, humidity, and barometric pressure.”

The TrackingPoint M600 SR and M800 DMR stream video to the shooter’s TrackingPoint ShotGlass wearable glasses, eliminating the need for him to shoulder the weapon and get his eye behind the optic, giving him Land Warrior/Future Force Warrior (FFW)/Future Warrior-type ability to shoot around corners and over barriers without exposing his head and body. TrackingPoint calls this capability “zero-signatur lethality”. Catchy.

Anyway, here’s the company’s press release on it:

“We firmly believe that the M600 SR and M800 DMR will save countless lives and enable our soldiers to dominate enemy combatants including terrorists,” said John McHale, TrackingPoint CEO. The company is offering ten free M600 SRs or M800 DMRs to any U.S. organization that can legally bring them to the Middle East in the fight against ISIS and Al Qaeda. “It’s hard to sit back and watch what is happening over there. We want to do our part. Ten guns doesn’t sound like a lot but the dramatic leap in lethality is a great force multiplier. Those ten guns will feel like two hundred to the enemy,” said McHale.

According to retired Colonel Tommy Gilmore TrackingPoint’s Squad-Level Precision Fire weapons will provide a significant overmatch advantage. “The modern battlefield is a dynamic, confusing, and very lethal environment. We have seen extraordinary advances in major weapon systems development. Now we see with the TrackingPoint precision-guided M600 SR and M800 DMR a force multiplier and a major step forward for the individual soldier, sailor, airmen, and marine. I have shot several TrackingPoint PGFs, in fact I own one, and can say without reservation the TrackingPoint PGFs are by far the most lethal and accurate small-arms weapons platform ever designed and produced,” said Gilmore.

Designed to replace the M4A1, the M600 SR delivers an 87% First-Shot-Success-Probability out to 600 yards regardless of shooter experience or skill. This is approximately 30 times the first-shot kill-rate for the typical soldier behind an M4A1. The M600 SR can eliminate targets moving as fast as 15MPH.

Designed to replace the M110 and M14, the M800 DMR delivers an 89% First-Shot-Success-Probability out to 800 yards. According to the Army’s own data (White Feather study, 1999) this result is approximately 33 times the first-shot kill rate of today’s operational snipers. The M800 DMR can eliminate targets moving as fast as 20MPH.

As a soldier pulls the trigger the enemy is automatically acquired and tracked. When trigger pull completes, the target is instantly eliminated. Total Time-To-Kill (TTK) is approximately 2.5 seconds for the M600 SR and M800 DMR. RapidLok™ Fire Control is image stabilized enabling fighters to make off-hand shots as if they are shooting supported. RapidLok™ has an auto-snap feature that automatically adjusts point-of-impact to target center of mass. Also, target velocity is instantly measured and contemplated in the launch solution. RapidLok™ incorporates a laser-based Barrel Reference System that ensures shot-to-shot perfect zero eliminating error from shock, vibration, or environmental changes such as temperature, humidity, and barometric pressure.

The M600 SR and M800 DMR stream video to TrackingPoint’s ShotGlass™ wearable glasses. The soldier can see the battlefield without putting his head behind the gun, and is completely unexposed and can see and eliminate targets as if he were looking in the scope. Soldiers can shoot over berms and around corners with an extremely high hit rate on moving targets at long distances.

David Crane started publishing online in 2001. Since that time, governments, military organizations, Special Operators (i.e. professional trigger pullers), agencies, and civilian tactical shooters the world over have come to depend on Defense Review as the authoritative source of news and information on "the latest and greatest" in the field of military defense and tactical technology and hardware, including tactical firearms, ammunition, equipment, gear, and training.
Previous DR Interview with David Pavlick of Nous Defions about Arsenal Democracy’s Future, and Tactical AR Carbine/SBR and Blackside Glock Combat/Tactical Pistol Accessories, Components and Parts: 10 Questions
Next Spinel Transparent Aluminum Armor (Body/Facial Armor and Vehicle Armor) and Optics for Future Soldiers/Warfighters!