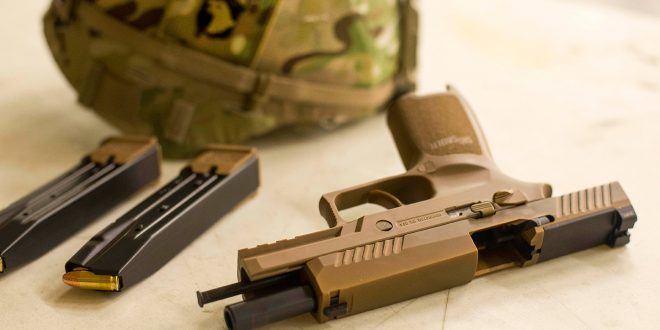 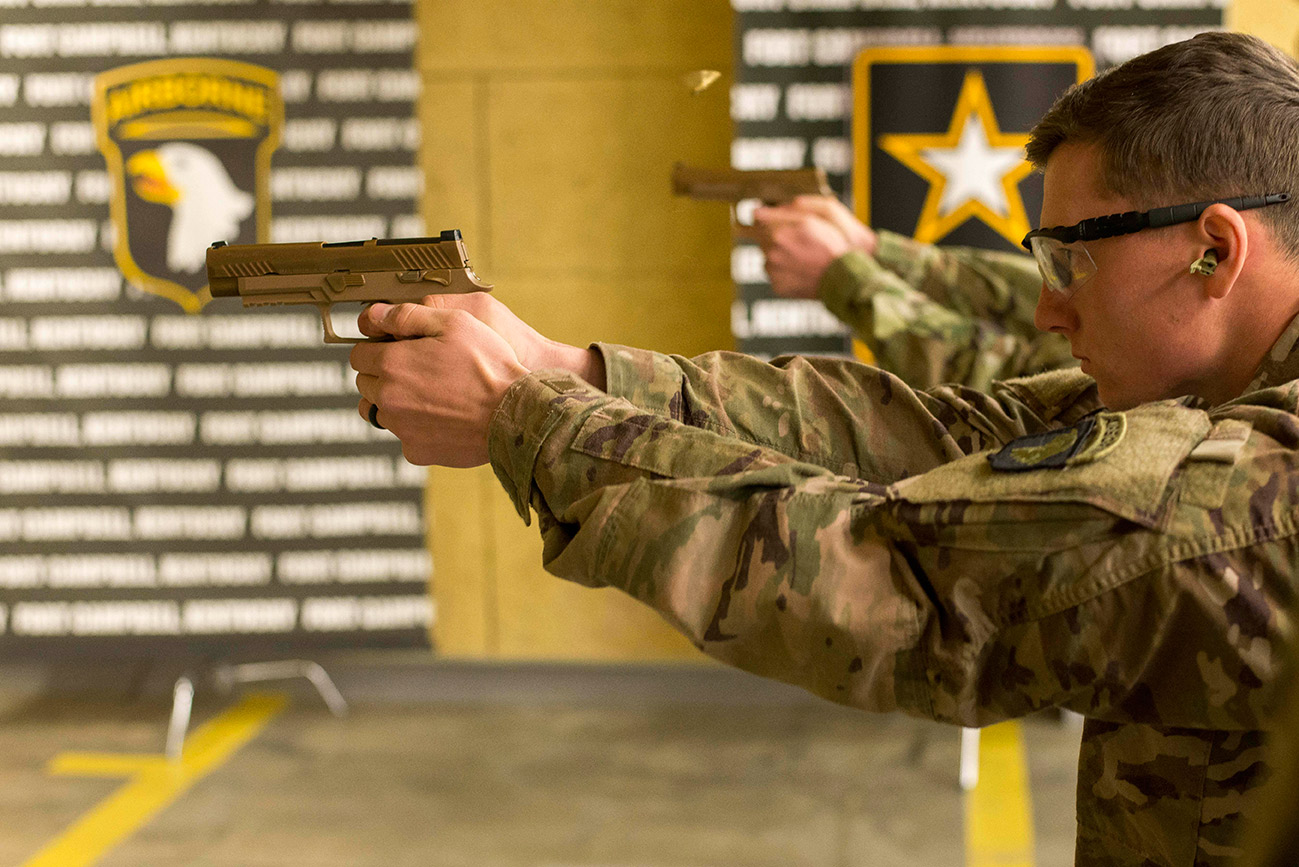 A recent SIG SAUER press release is touting the fielding of the SIG Sauer M17/M18 MHS (Modular Handgun System) striker-fired 9mm combat/tactical pistol system, which is a pretty big deal for the company, especially since it’s only the beginning of what will be a total Army-wide replacement of the Beretta M9 pistol over the next 10 years. Getting back to the present, though, 1st Brigade Combat Team, 101st ABN DIV (AASLT) “began fielding the new handguns today at Fort Campbell, Kentucky under the command of Col. Derek K. Thomson”, according to the release. The SIG Sauer M17/M18 MHS pistol is essentially a modified SIG P320/P320C Nitron striker-fired pistol, which DefenseReview (DR) has some experience with (both the standard and compact SIG P320C variants). Editor’s Note: DR particularly enjoyed shooting the P320C, since it handled and shot well. 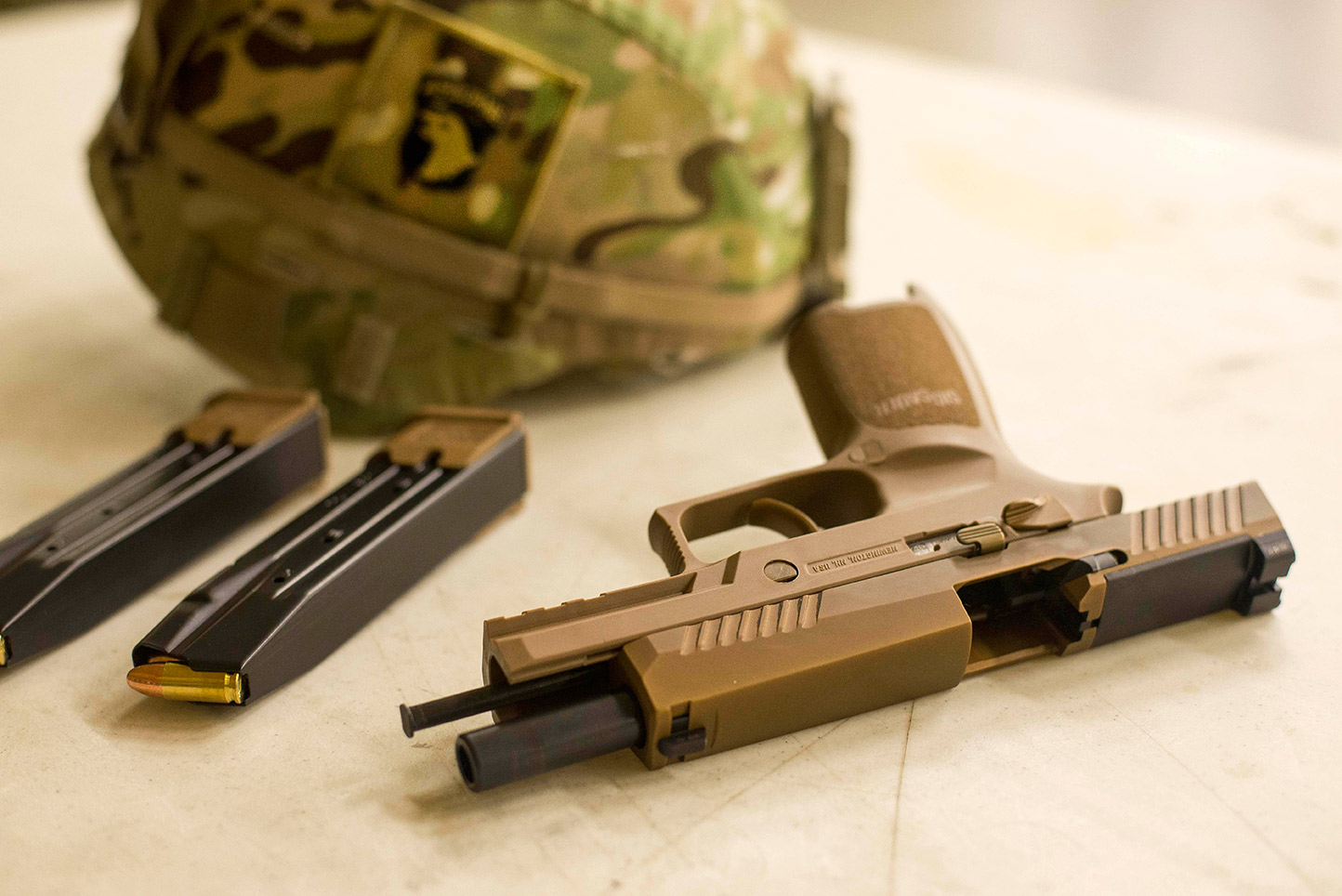 DR finds it interesting that the SIG P320-series pistol(s) won the Army’s MHS contract, since it’s our understanding through anecdotal data/feedback that the P320 has experienced both drop-test failures and return-to-battery failures after a press check, where the slide is moved back slightly out of battery, and then allowed to spring back forward. We hadn’t heard that those two issues had been both addressed and resolved. Perhaps they were. We’ll try to find out.

The closest pistol to the SIG M17/M18 DR’s handled is the SIG P320 X-Carry, which we got to play with a little at SOFIC (Special Operations Forces Industry Conference) 2017. While we’re Glock guys over here, and are most interested in the new Gen5 Glock 17 and Glock 19 (Glock 17M and Glock19M) 9mm pistols, we understand why the US Army would prefer a pistol like the SIG P320, as it features the aforementioned ambi manual safety. It should perhaps also be noted that SIG SAUER has a strong history with the Army, going back to the 1984 9mm pistol trials that they lost to Beretta under some controversy. Many believed the SIG P226 was the superior pistol to the Beretta 92F/M9, and that the Beretta won due to its lower cost, and politics/political maneuvering. Just a little history. 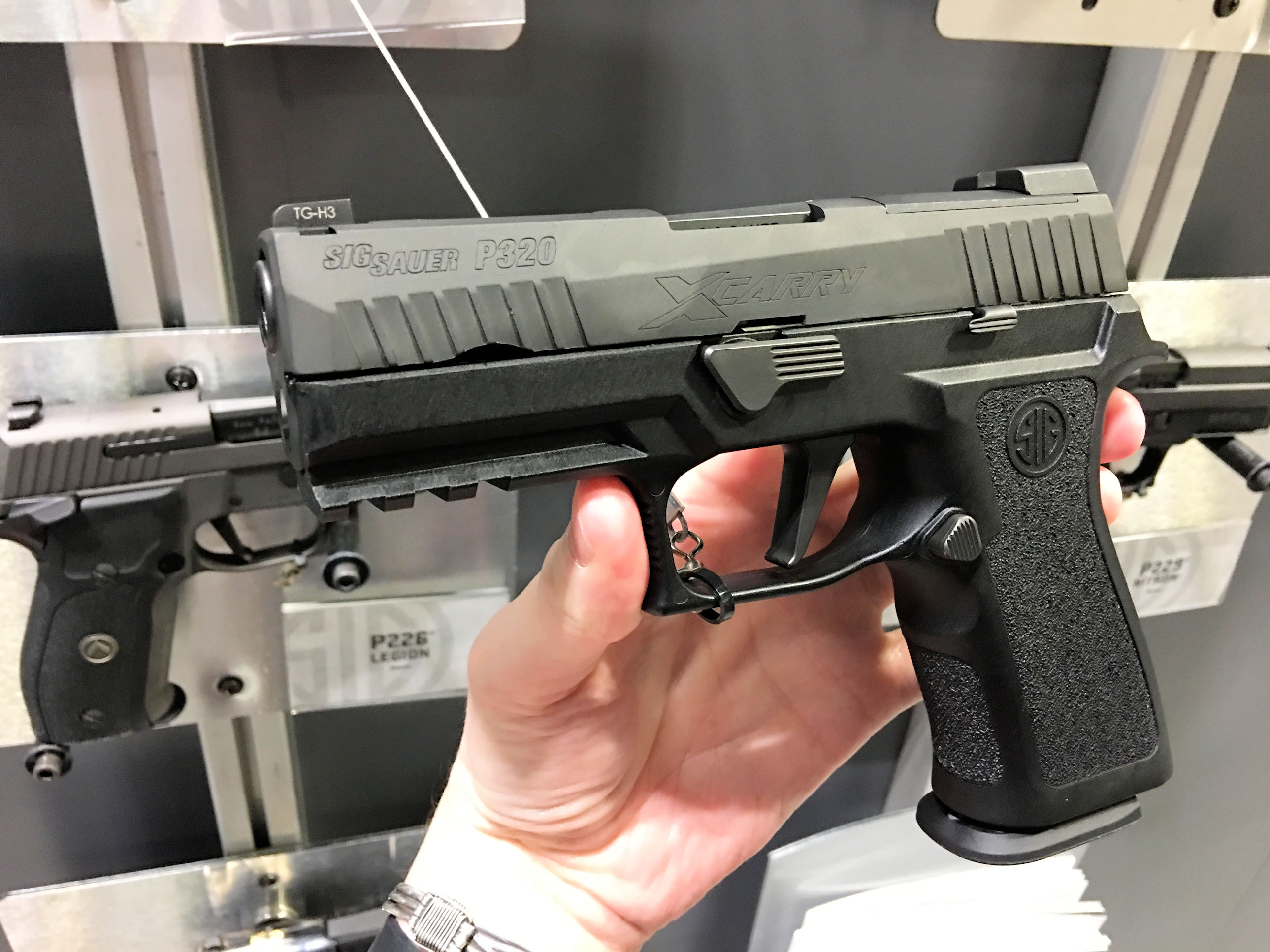 Anyway, the most interesting portion of the SIG press release to DR was the following

It’s interesting to us, because we’re curious as to how much more lethal the SIG M17/M18 MHS pistol system actually is over the Beretta M9/92F in both general infantry and Special Forces (SF) hands. SIG’s press release makes it sound like the M17/M18 MHS is almost like a magic gun. We’re guessing that the M17/M18 is more likely to assist the former group (general infantry) achieve a performance advantage, rather than the latter group (SF). In DR’s experience, a highly trained and skilled Beretta 92F/M9 shooter is pretty difficult to beat. We learned this a few years ago at the Beretta Tactical Summit under the great tutelage of one Ernest Langdon–and we didn’t exactly go into the class with a ton of optimism about shooting well with a relatively heavy (over our Glock 19 carry guns) DA/SA auto pistol. Langdon, however, changed that (mindset) for us, and really opened DR’s eyes. In fact, your humble correspondent came in second place in the timed shooting competetion using a Beretta M9A3 9mm pistol, and I almost won a gun. Surprised myself, actually. 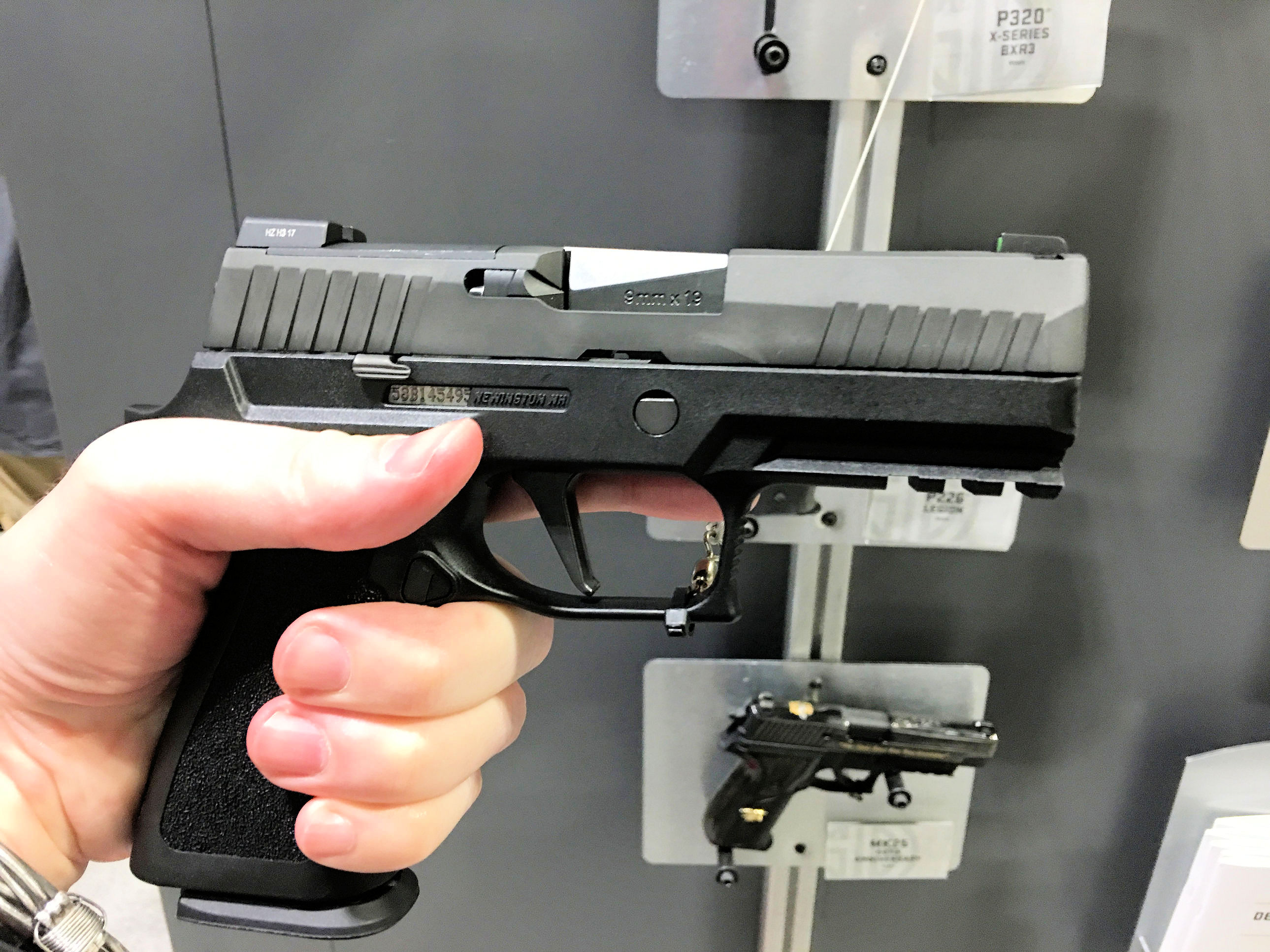 That said, Defense Review can more easily get behind the following statement(s) from the SIG Sauer press release:

“The world has changed since the strength and resilience of this division was forged during the maelstrom of World War II,” said Maj. Gen. Andrew P. Poppas, 101st ABN DIV (AASLT) commander. “In order to maintain our decisive edge, we must continue to outpace our potential adversaries with more lethal capabilities, from the modular handgun system we fielded today to the innovative and adaptive air assault concepts, equipment and training the 101st continues to perfect.”

The US Army definitely has to stay ahead of our adversaries and enemies (and potential adversaries/enemies), and maintaining our technology and hardware advantage is a major part of winning future wars and conflicts. 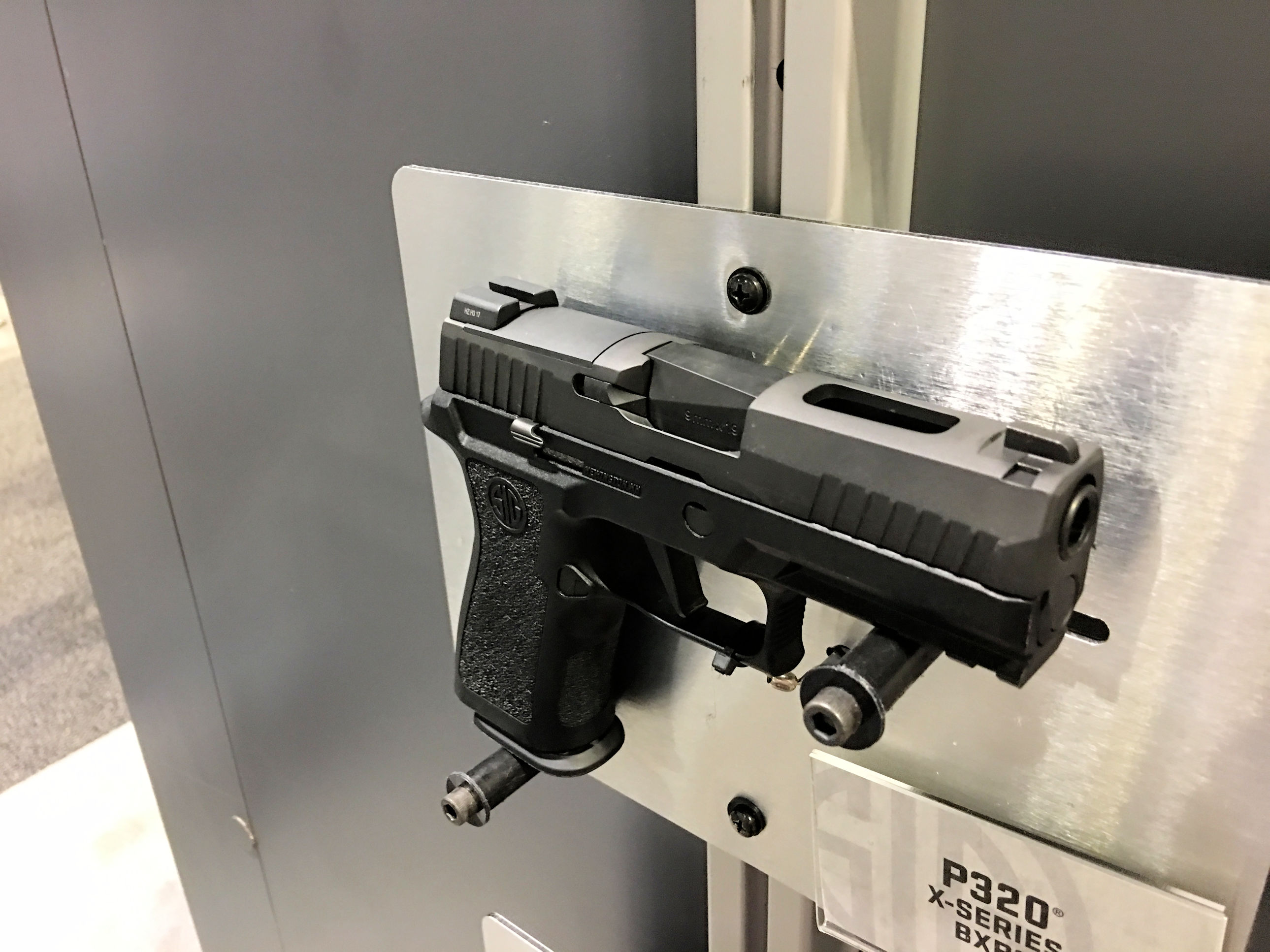 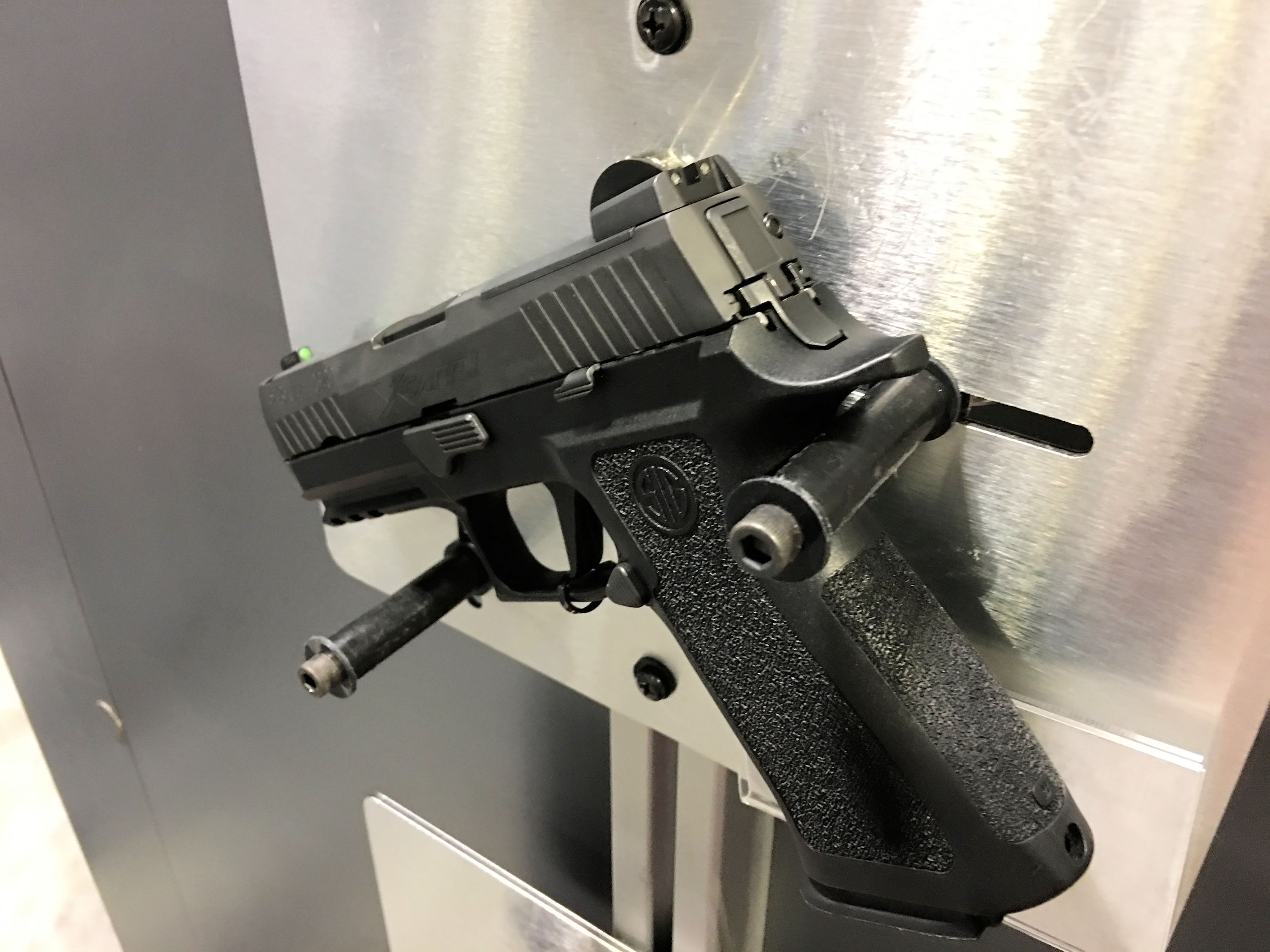 Training Coordinator
SIG SAUER Academy
Phone: 603-610-3411
Email: [email protected]
Website: https://www.sigsaueracademy.com
© Copyright 2017 DefenseReview.com. All rights reserved. This material may not be published, broadcast, rewritten or redistributed without receiving permission and providing proper credit and appropriate links. If you are reading this article anywhere other than DefenseReview.com, please email us the website address/URL (where the unauthorized DR article reprint is located) at defrev (at) gmail (dot) com. Thank you.

All photo and video content contained in this article, except the first/top two photos and first/top video, was shot by DefenseReview.com, and is copyrighted. DefenseReview.com owns the copyright on all photo and video content. All DR photos and videos were shot with a Sony Cyber-shot RX100 (DSC-RX100/B) Digital Camera with 20.2 MP (20.2-megapixel) still camera and 1080p HD video camera capability.