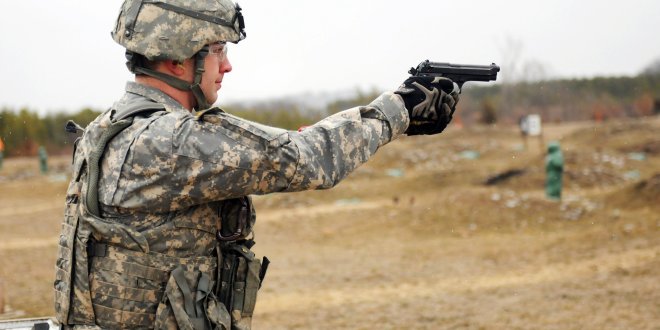 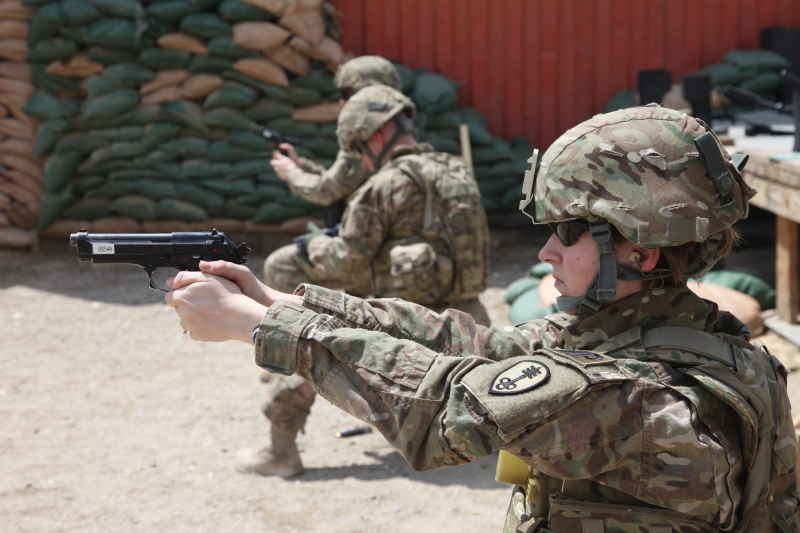 While DefenseReview (DR) was at the Remington Arms/Remington Defense New Product Seminar and range event at Gunsite this week (which we’ll be reporting on shortly), I was asked by other writer/attendees about my thoughts on the U.S. Army’s Modular Handgun System (MHS) program, formerly known as the Combat Pistol (CP) program, formerly known as the Joint Combat Pistol (JCP) program. Specifically, they wanted to know if I though it will be successful in that the Beretta M9/92F and SIG SAUER M11-A1/P228 pistols will be successfully replaced, and what those replacements should be.

I told all three of them that while I’m highly skeptical that the Army will actually replace those guns any time soon, and am of the opinion that the MHS program will likely go the way of the JCP and CP clusterf*cks, I’d simply take Glock 17 (G17) and Glock 19 (G19) 9mm pistols, stick manual safeties on them (for general infantry personnel), some good night sights, and call it a day. Why?

First, the G17 and G19 are both already battle proven in military combat environments, and the G19 is already in the system and in service with U.S. military Special Operations Forces (SOF), specifically U.S. Army Special Forces (SF) assaulters/operators as both an operational/carry and training gun.

Second, the Glock 17 and Glock 19 have proven their reliability and durability over many years. They go “bang” every time, and they keep going “bang” every time, for a very long time. The Austrians have been using the G17 for the last 30 years, U.S. Army SF operators have been running G19’s since ’06 or ’07, and American law enforcement officers (LEO’s), including SWAT operators, have been running both guns in such large numbers in so many different weather conditions for so many years that everyone just takes it for granted at this point that Glocks are runners. Glocks just work, and keep working with minimal maintenance. 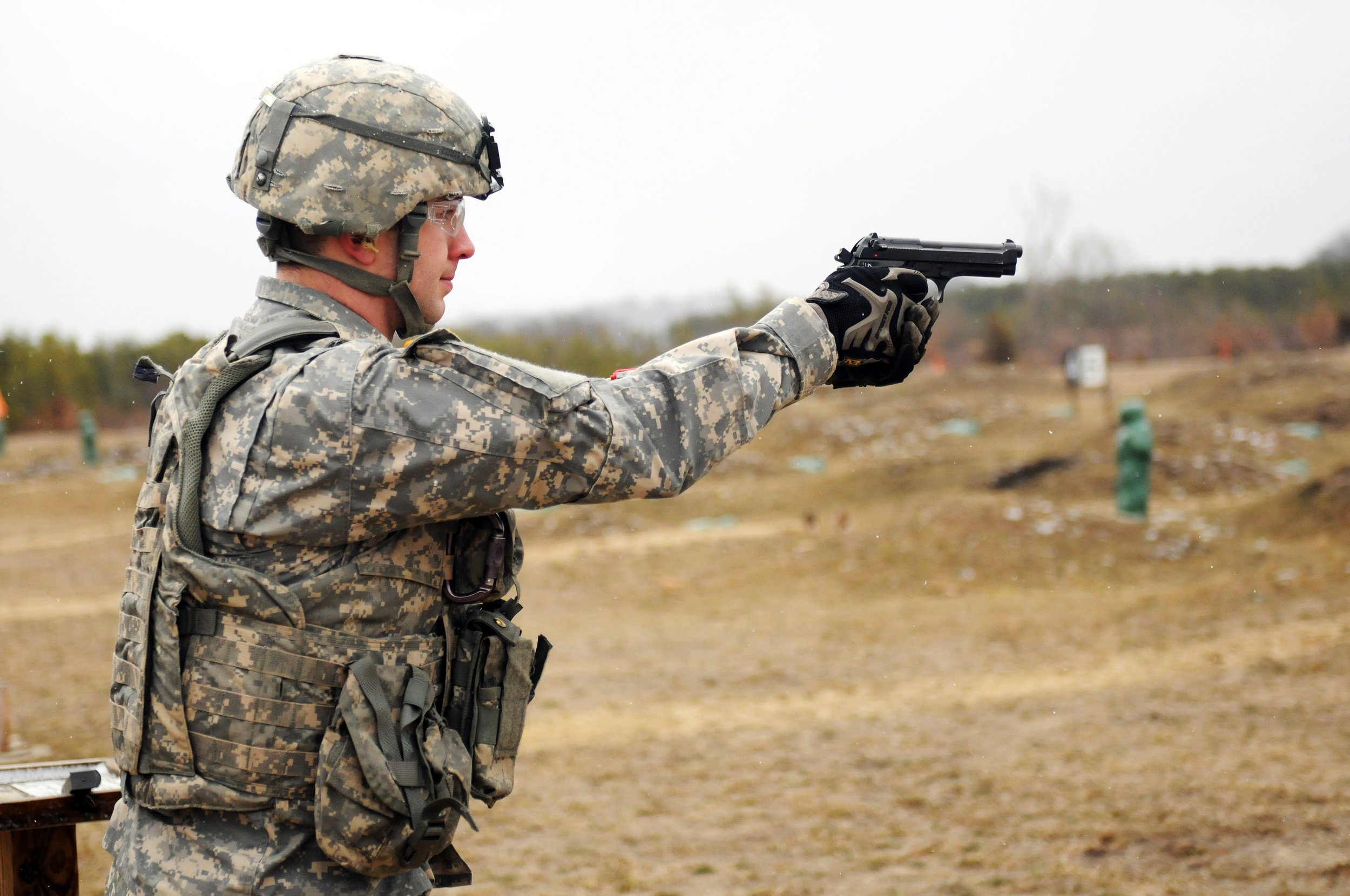 Third, because they have fewer parts than most, if not all, other combat/tactical pistols, there’s simply less to go wrong on Glocks in the first place. And, four, when something does go wrong, they can be fixed in the field at the operator/soldier level. You don’t have to send the gun out to an armorer. All you need is a Glock tool, a Glock armorer’s manual, and spare parts, and you can replace any part on that gun in minutes, lickity split, easy-peasy. If you’re in bumf*ck Afghanistan or some other hellhole FOB away from a major base, that’s a pretty big deal. The Glock 17 and 19’s simplicity, combined with their reliability, durability and easy maintainability, essentially make them the Kalashnikov AK-47/AKM’s of the pistol world.

The reason DR thinks manual safeties should be added is that DR writer/contributor and Army SF operator Jeff Gurwitch says that for general infantry personnel, i.e., regulary Army, the guns would have to be outfitted with a [frame-mounted, sweep-down] manual thumb safety to prevent AD’s (Accidental Discharges). Ideally, the manual safety should be ambidextrous, provided it’s well-designed, reliable and not too easy to engage unintentionally. Glock already has a manual safety design for the Glock pistols, but DR doesn’t know whether or not it can be made ambidextrous. Regardless, any manual safety addition should should be combined with good training, where soldiers are trained to keep their trigger finger indexed outside the trigger guard until they’re ready to shoot, and as soon as they’ve stopped shooting. SOF operators wouldn’t need a manual safety due to their superior weapons handling and shooting training and skill, so they could be given the choice of a standard or manual-safety G17/19.

But why keep the 9mm Parabellum/9x19mm NATO cartridge? Because, one, it’s a NATO cartridge, so it’s pretty entrenched, and two, the pistol is just a secondary/backup weapon to the M4/M4A1 carbine, the 9mm is simply an easier round to shoot well than the more powerful cartridges being proposed, and it would probably be easier (and cheaper) to get high-quality 9mm hollowpoints approved than move to a whole new caliber. Remember, the United States never actually signed Hague, and there’s a strong argument to be made that modern hollowpoints don’t violate the spirit of it, anyway. Understand that the U.S. is just choosing to follow Hague, a technologically antiquated document. For the record, DR actually really likes the .357 SIG bottleneck cartridge, since it’s like a 9mm on steroids. It provides good stopping power, it shoots accurately and flat, and is still relatively easy to shoot. The .45 ACP is also a great CQB/CQC (Close Quarters Battle/Close Quarters Combat) cartridge, particularly in hollowpoint form, but the guns are simply too large, particularly in the grip, for a lot of people to comfortably handle and shoot. They’re also heavier to carry. .40 S&W is also harder to shoot than 9mm, and it wears out the guns faster. Finally, with the possible exception of the .357 SIG, the 9mm Parabellum cartridge is the most inherently reliable cartridge. Due to it’s shape and continuous taper, it feeds easier and with more leeway (greater margin of error) than .40 S&W or .45 ACP.

However, if the Army can’t get modern 9mm hollowpoints approved, and they feel the need to go to a more powerful cartridge, DR recommends going to .357 SIG Glock pistols. We like the cartridge.

One of the beauties of the Glock 17 and Glock 19 are their respective high capacities, so you’ve got plenty of rounds to pepper a target with, which makes up for the 9mm’s lack of stopping power with NATO ball ammo. And, since both guns are so easy to shoot well, you’re going to be more accurate on target with follow-up shots than you would be with a .40 S&W, for example. If you double or triple tap the target center of mass, the 9mm should do the trick, even with NATO ball (roundnose) rounds. In a military combat environment, you should expect to have to shoot a determined adversary more than once, especially with a pistol–and you’d be well-advised to use your M4/M4A1 or M16A3/A4 instead.

So, which Generation Glock 17/19 should the Army go with? DefenseReview prefer’s the Gen 3’s original/single recoil spring, but we prefer the Gen 4’s adjustable backstrap with extended beavertail tang option. So, we’d like to see a hybrid version of the Glock 17 and 19 that combines both features.

David Crane started publishing online in 2001. Since that time, governments, military organizations, Special Operators (i.e. professional trigger pullers), agencies, and civilian tactical shooters the world over have come to depend on Defense Review as the authoritative source of news and information on "the latest and greatest" in the field of military defense and tactical technology and hardware, including tactical firearms, ammunition, equipment, gear, and training.
Previous AVIC Holographic Ground Control Station (GCS) for UAS/UAV/UCAV/Drone Aircraft Operations: Chinese Military Goes SciFi
Next US Navy Approves Raytheon Laser Weapon System (LaWS) Shipborne Laser for Ship Defense in Persian Gulf after Successful Testing