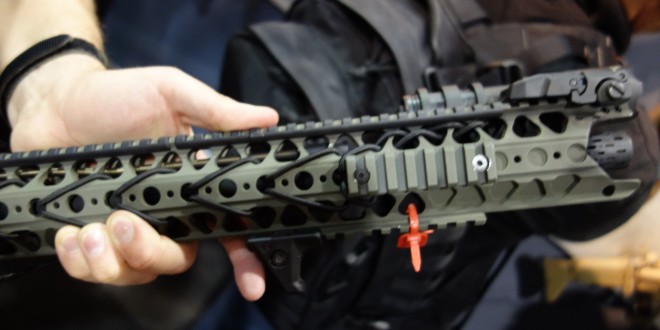 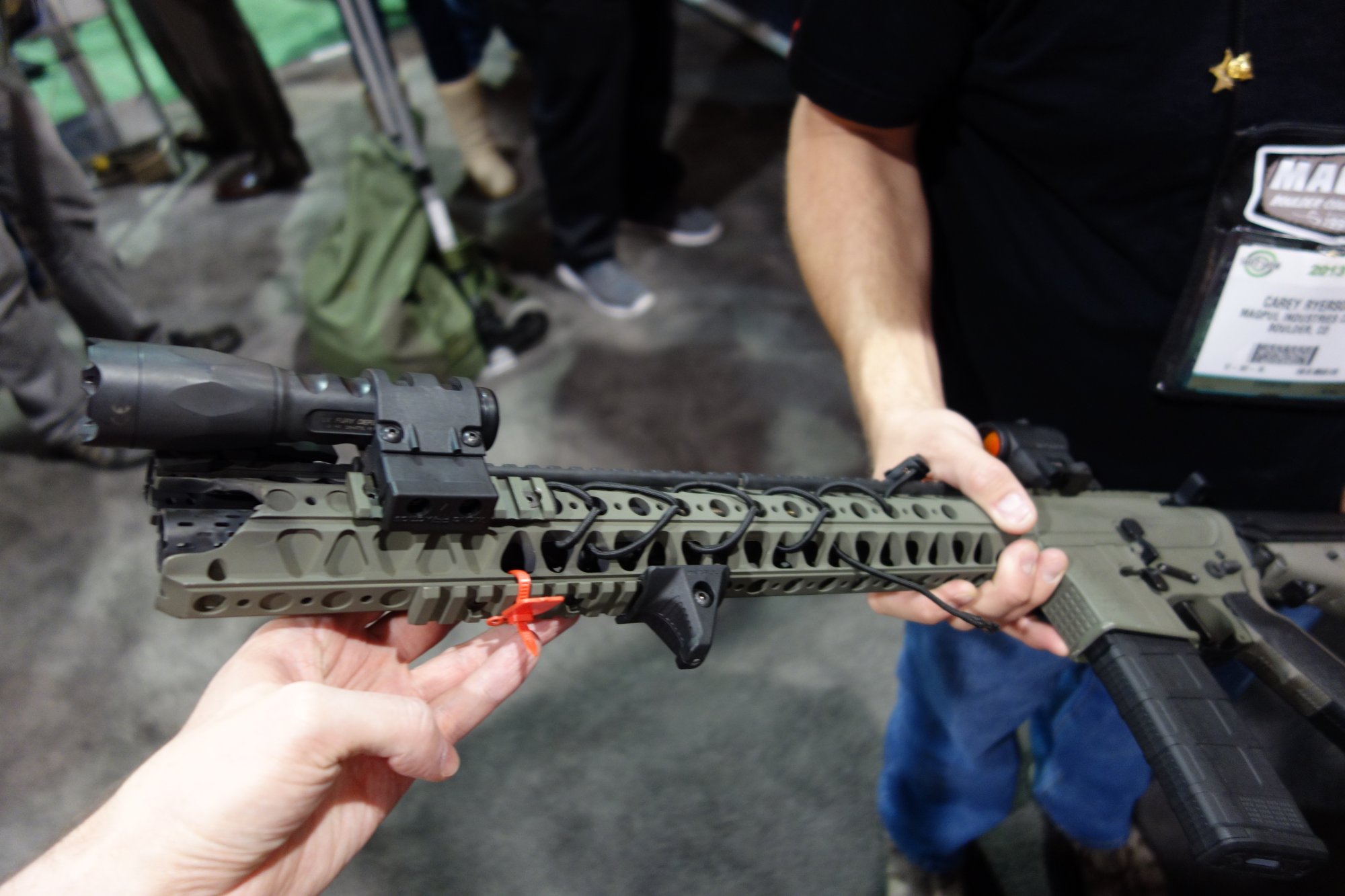 When DefenseReview.com (DR) stopped by the MagPul Industries booth at SHOT Show 2013, we shot a few quick photos of the War Sport LVOA-C (Carbine) tactical AR-15 carbine, a direct-gas-impingement (DGI) AR that features War Sport Industries' (WSI) proprietary Low-Visibility Operations Application (LVOA) rail system/forend rail tube that extends all the way up to the muzzle, specifically over and under it. The weapon we photograhed and handled at the booth also sported a War Sport LVOA Rail Bungee, which is essentially IR-compliant/heat-resistant shock cord that's supposed to "offer a secure grip in wet environments" and "lower noise signature", according to company literature. The LVOA-C and LVOA-S (Select-Fire) weapons also incorporate a proprietary muzzle brake/compensator/flash hider/flash suppressor that works in congress with the LVOA rail to mitigate as much muzzle flash as possible without the use of a muzzle can (silencer/sound suppressor) , reducing the assaulter's/operator's visibility and enhancing his visibility while firing under NVG's/NOD's (thus the "low-visibility" moniker). 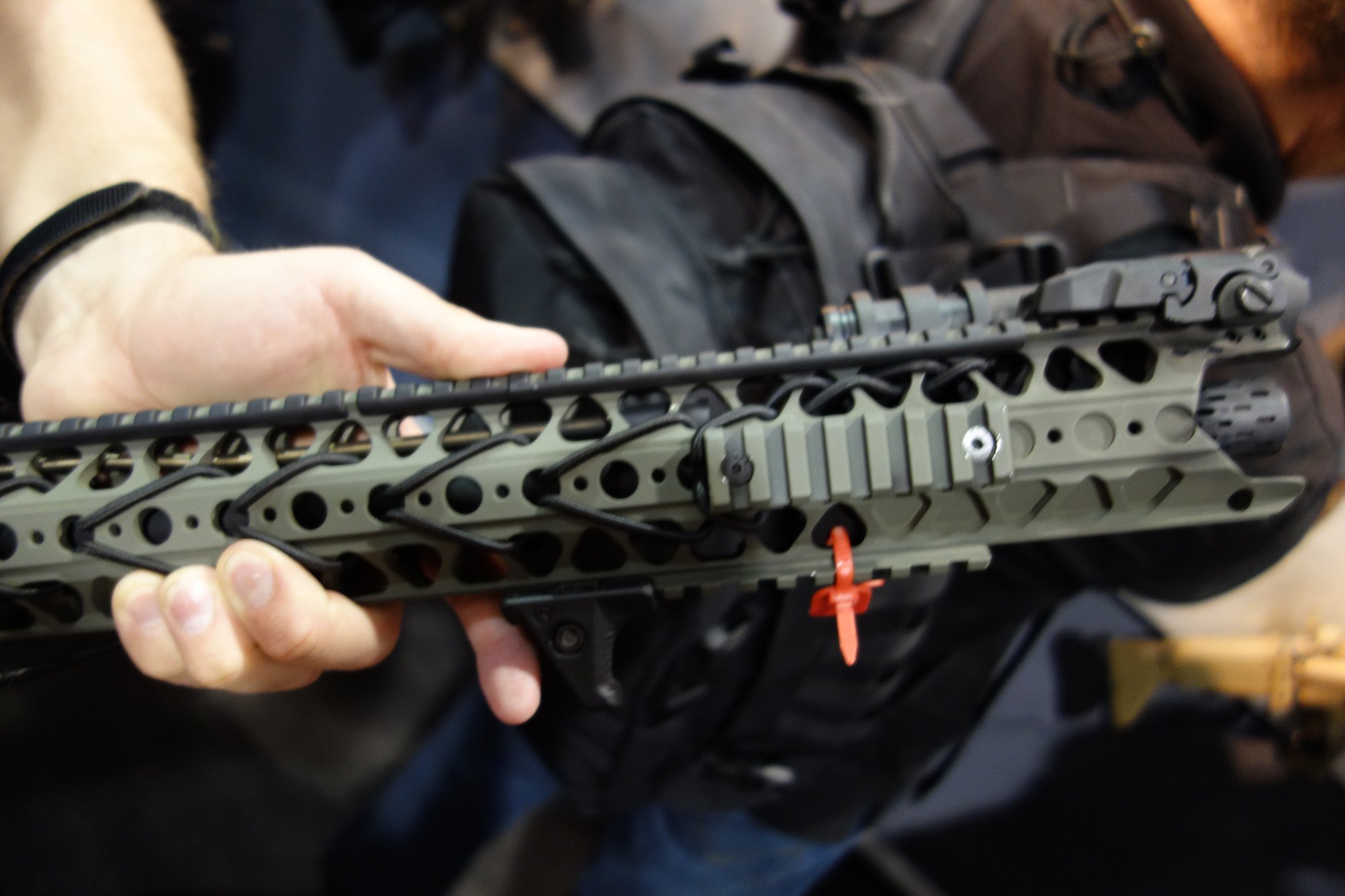 The only major caveat to the WSI LVOA rail system from an operational standpoint that we can see is the fact that, at present, it's incompatible with a can (silencer/sound suppressor), presumably due to the diameter of the rail tube and resulting lack of available space around the muzzle brake. If you increase the tube's diameter, you also increase it's circumference, making C-clamp shooting difficult for anyone without very large hands. The LVOA-S select-fire/full-auto carbine/SBR (Short-Barreled Rifle)/sub-carbine version was reportedly developed for a Special Operations Forces (SOF) end user, who obviously wanted an unsuppressed weapon with minimal visible flash signature and enhanced low-light/no-light shootability/usernomics.

Now, why would a unit/team or individual assaulter want to go with a WSI LVOA-S or LVOA-C carbine/SBR instead of a silenced/sound-suppressed weapon? Perhaps if they want a weapon with a certain amount of overall weapon length with specific terminal ballistics out of a 5.56mm NATO (5.56x45mm NATO) platform, where a suppressor would either add too much length or the barrel would have to be shortened enough to accomodate the suppressor that the ballistics would be impacted too much. Other than that, we're not really sure. However, the LVOA-C looks like it makes a nice tactical 3-Gun carbine platform, and the LVOA rail itself looks good. It has a nice visual aesthetic. 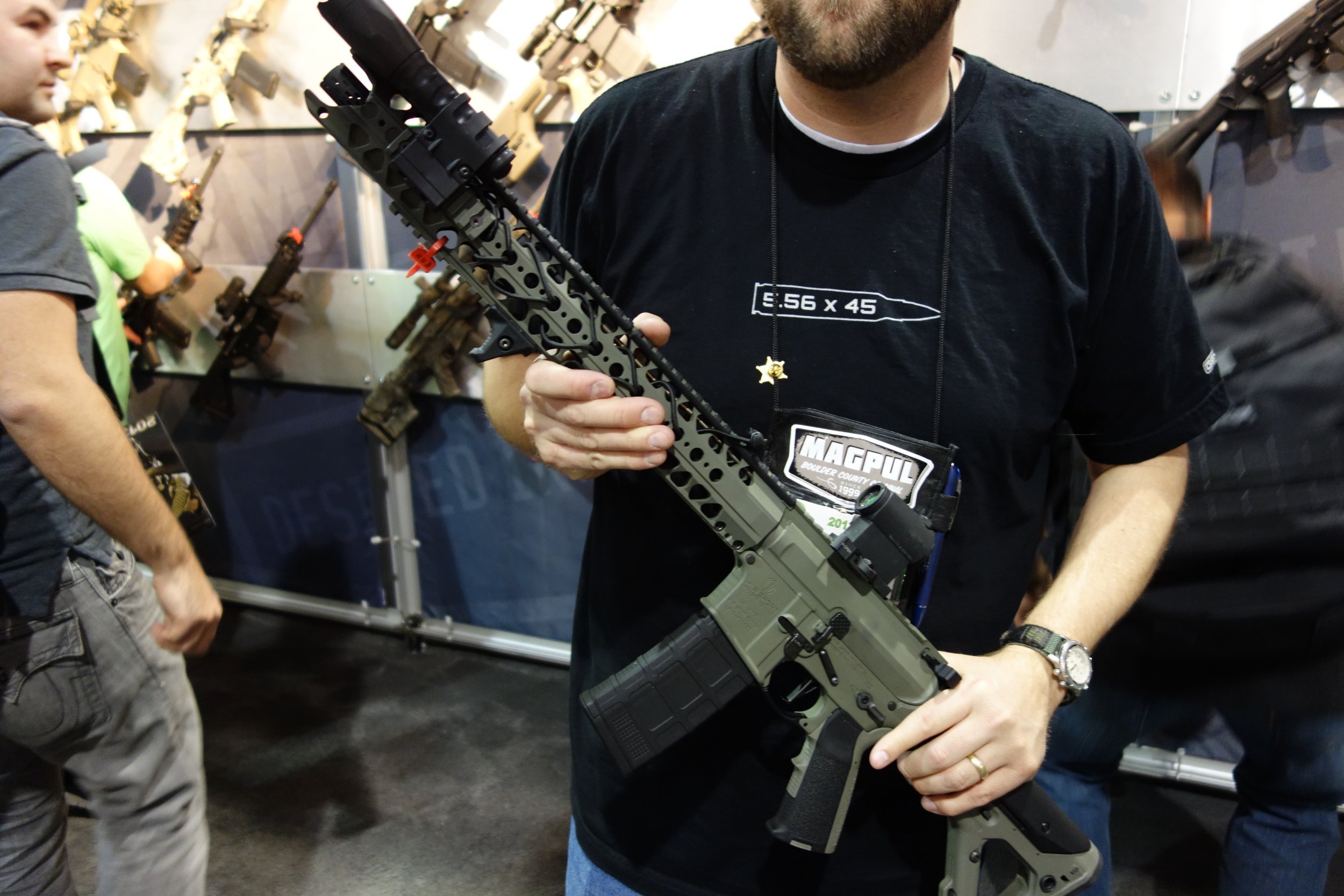 If you need sound suppression AND a short overall weapon profile, maybe you need to go to a 300 AAC Blackout (300BLK)/7.62x35mm or 6.8 SPC (6.8x43mm SPC) tactical AR SBR for significantly superior punch (terminal ballistics) over a 5.56mm at close-to-medium range, regardless of barrel length (carbine or SBR).

Defense Review prefers suppressed weapons to unsuppressed weapons for some applications, missions and tactical operations, including, but not necessarily limited to, low-profile/low-visibility ops, low-light/no-light dynamic CQB/CQC (Close Quarters Battle/Close Quarters Combat) gunfighting, and medium-range engagements, if they're available for use. If you're gonna' use a can, you might want to outfit it with a War Sport Suppressor Sock for masking the can's (and thus the shooter's/operator's) thermal/IR (Infrared) heat signature and protecting the shooter's hands, body and clothing. If you're operating in cold or arctic environments, a War Sport Thermal Rail Cover might not be a bad idea, as it will protect the hands, and may also mask the barrel's (and rail's) heat signature a bit (unconfirmed/unverified). Thermal signature management, or what the company refers to as "thermal cloacking", is going to become increasingly important as other nation states and terrorist organizations acquire and utilize more and better thermal/IR and night vision sensors. 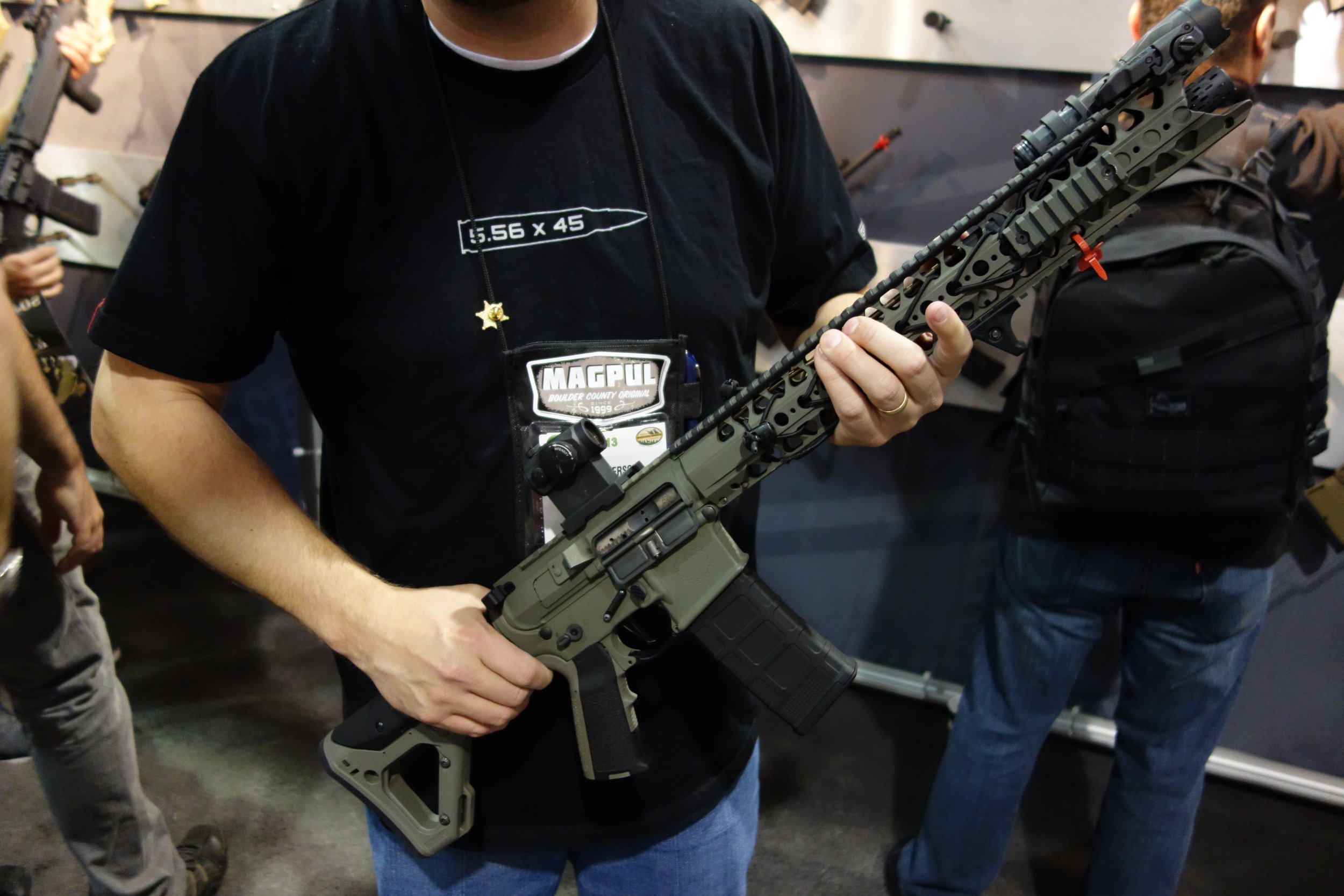 That said, DR prefers to run a stubby vertical foregrip like the TangoDown Stubby Vertical Grip or Bravo Company Manufacturing BCMGunfighter Vertical Grip Short, since it makes carrying a weapon two-handed for extended lengths of time much easier, provides a (relatively cool and safe) full gripping surface away from the rail system and barrel when shooting full-auto, and allows for a more natural, comfortable and relaxed shooting grip and stance when firing on semi-auto. A vertical foregrip provides the shooter with a solid backstop and/or full gripping surface for his hand, depending on the situation.

Note: The author prefers shooting with stubby vertical foregrip, and shoots with two fingers on the rail and two fingers on the grip, with the left-hand thumb pointing forward at the target along the left side of the rail when shooting righty, and the right-hand thumb point forward on the right side of the rail when shooting lefty. However, DR has also been trained to shoot using the C-clamp grip, which came out of 3-Gun competition and was adopted by a lot of military operators and civilian tactical shooters.

The following (slightly edited/reformatted) info on LVOA-C and LVOA-S features and specs comes directly from the War Sport Industries website: 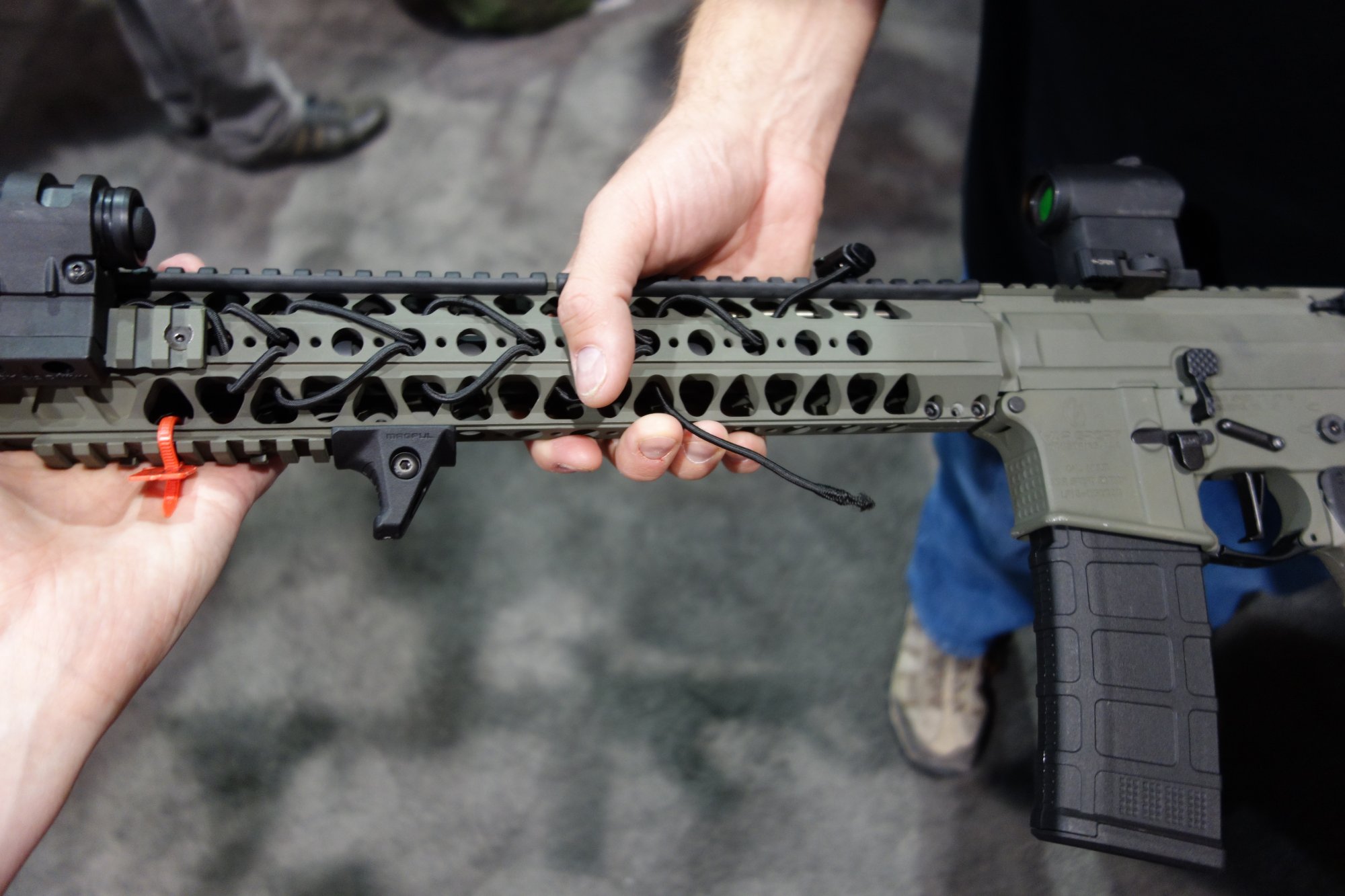 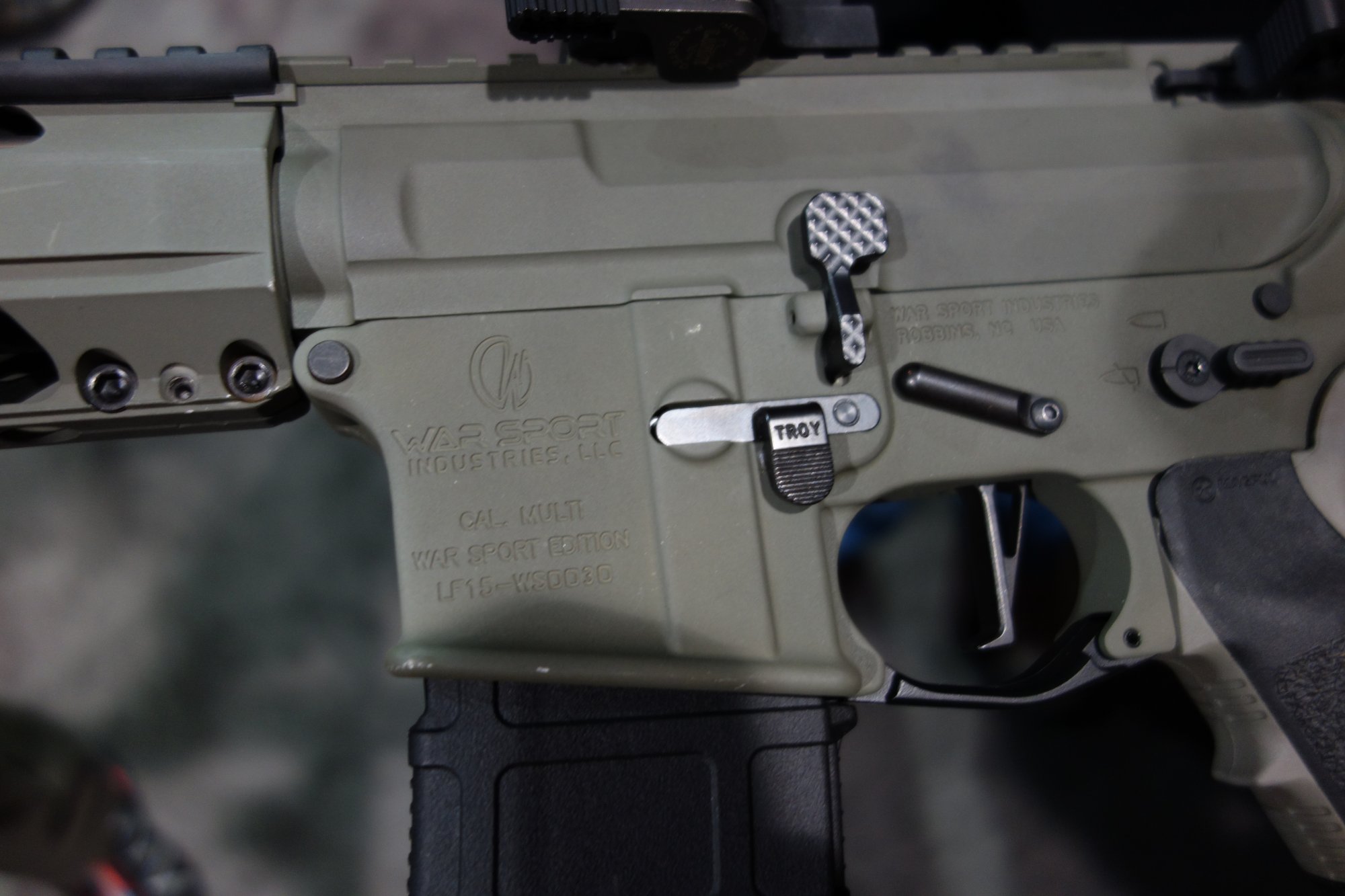 The LVOA AR ships with Rail Bungee (Shock Cord) installed on the rail. The “Bungee” provides better grip under wet conditions, reduces the noise and harmonics the rail may produce, gives the shooter a quick -n- easy way to secure cables from lights, lasers, etc… The bungee can also be utilized to “suspended” the muzzle end of the weapon when conditions permit (Vehicle applications, HELO applications, wounded Shooter, etc…)

The LVOA design principle was to engineer an SBR platform (Entry Weapon, CQC, CQB, etc…) that offers the lowest Flash Signature without the use of a sound suppressor (Go Loud, Go Fast without the Flash). The final outcome of our testing also produced one of the flattest shooting AR’s on the market with almost zero felt impulse. Target acquisition and follow up shots with the LVOA AR is very fast even for the novice shooter. The LVOA -S (SBR) is a very accurate system from 0 – 300yds with plenty of knock down energy. We accomplished these benefits by using a full muzzle brake and designing a rail system that encompasses the muzzle brake and acts as a “Flash Hider” and temperature regulator, so basically you get a the best of both worlds (Flash Hider + Muzzle Brake).

We have tested most ammo spending much of the testing on “cheaper” ammo to achieve the best results. We found that quality ammo from 69gr and up perform the best. We also tested from Sea level and to upper altitudes. Sea Level combined with cheaper ammo (Inconsistent Powder) provides the worst results even though still out performs any SBR in regards to flashing.

The LVOA AR design was developed by the needs of the “CQC Shooter” who learned the hard way what doesn’t work and what does in combat. We (War Sport) did not set out to develop gadgets and devices which add weight and complexity to the AR/M4 platform. Instead we reduced material to add some basic old school functionality and features." 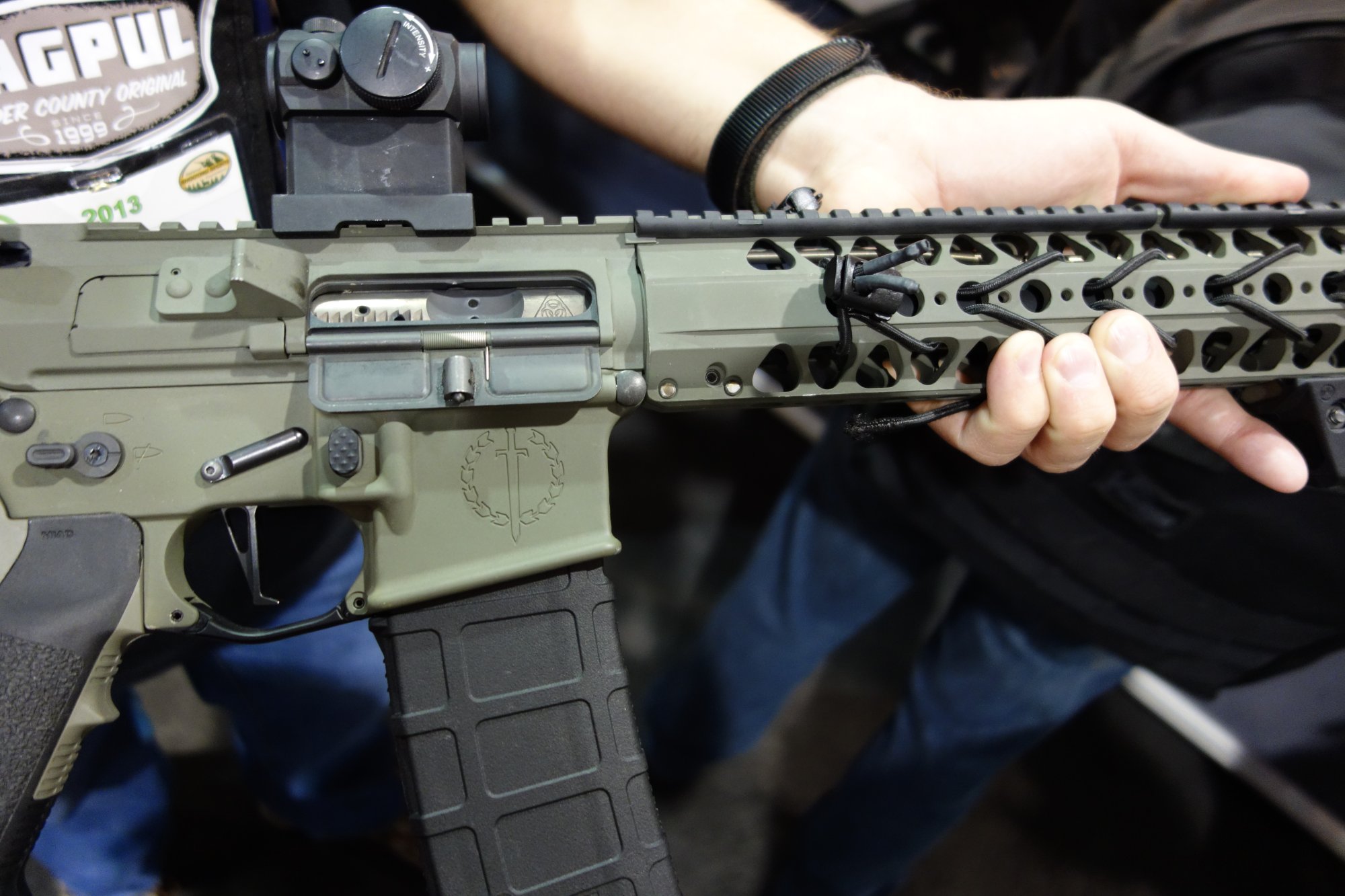 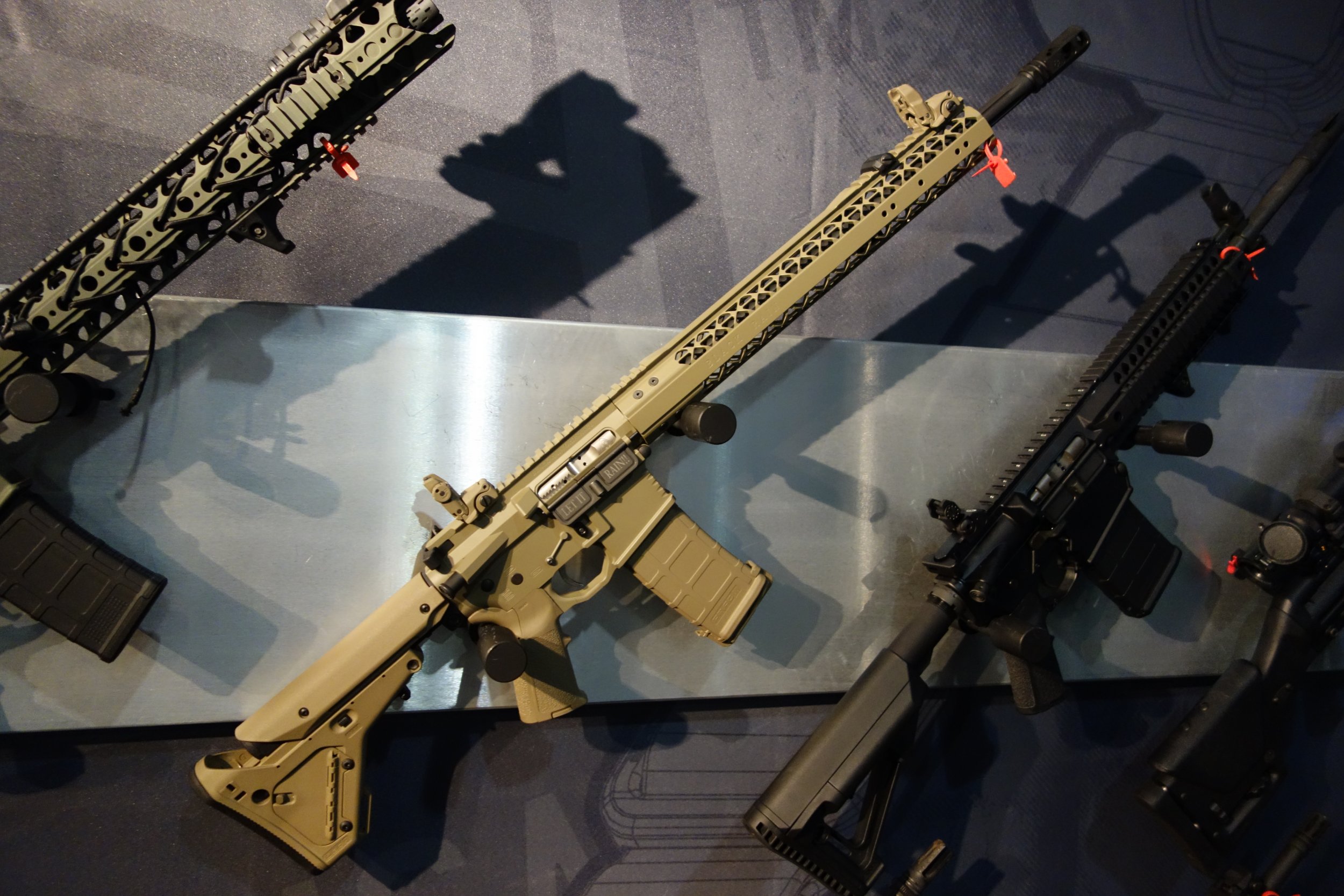