Most professional and civilian gun people carry a tactical folder, these days. And, being gun guys ourselves, we here at DefenseReview like to carry a good tactical folder as a backup to our primary weapon, which is usually a Glock 19 (G19) or some other high-capacity tactical pistol. The tactical folding knife has become one of the most popular tactical tools for defensive backup use, and it can also pull double-double duty and be used for a multitude of utilitarian tasks, like opening boxes and letters, cutting open packaging, cutting strings, prying stuff open (not necessarily recommended), etc. A tactical pocket folder is just a really useful thing thing to have on you, in general, and it might just save you in a pinch, if you can’t carry your pistol, or your pistol goes down in a fight.

For the last several months, one of the knives we’ve been carrying around here at Defense Review is the… 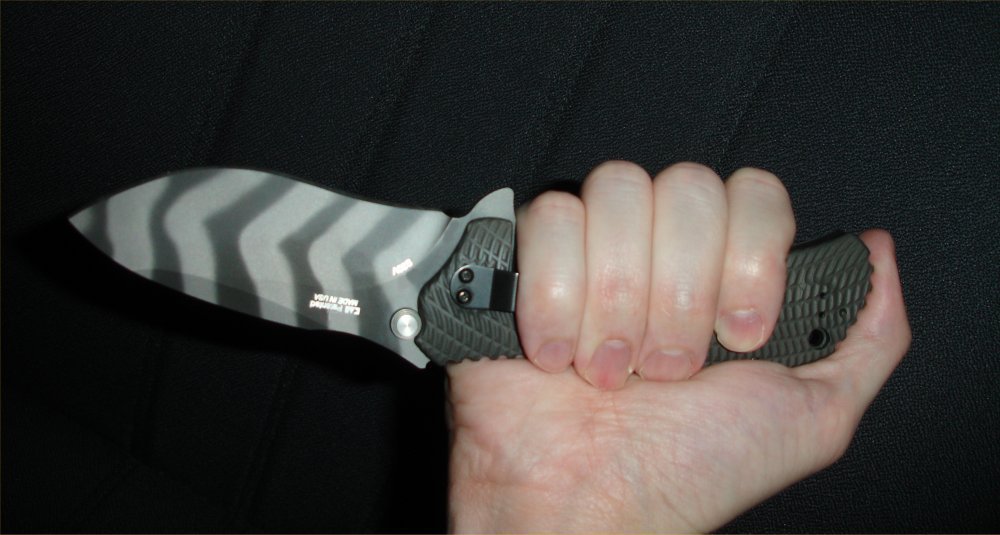 But the fast-action assisted-opening mechanism is really what turned me on about the knife, and why I wanted to review it. I just thought it was really cool.  And, let’s face it, it’s perhaps the knife’s most unique aspect, and thate which sets this knife (ZT301) apart from the pack and sells it. I remember that my dad saw a prototype of the ZT301/302 before I did at SHOT Show 2006, and really went nuts over it. He just really thought it was a great idea, and, frankly, so do I.

Being a hard-use knife, the ZT301 is significantly heavier (8.6 oz.) and bulkier than my Blade-Tech / Tim Wegner Professional Hunter Extreme a.k.a. Pro Hunter Extreme tactical folder, so it’s not quite as easy to carry. However, it’s still carryable. You just have to get used to the extra thickness and weight. And, once you deploy the knife, its excellent tactical design and ergonomics become immediately apparent. Basically the knife has Strider written all over it, from it’s look, to its feel, to the blade’s tiger stripe. 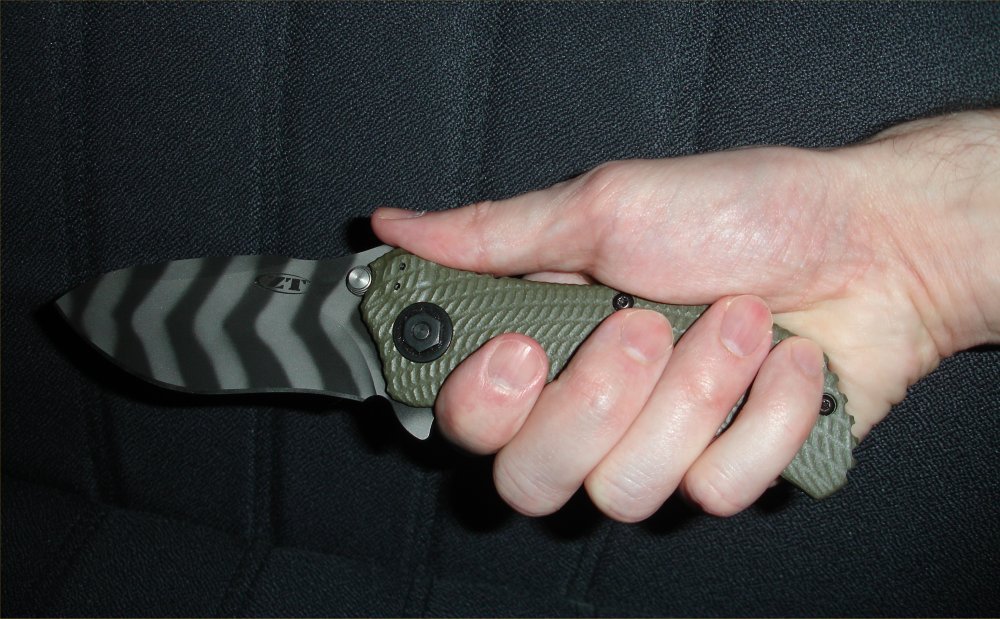 The ZT301 is very well designed, and the ergonomics are fantastic for my hands. The knife is extremely comfortable and feels totally natural in both standard and reverse grip holds. In fact, the reverse grip is where you realize how great the grip (G10 scales) is. I’d venture to say that the ZT301’s grip is about as well-designed as I’ve ever seen on a tactical folder, and the texturing on the G-10 scales is just right for me–non-slip, yet comfortable to hold. The top of the frame near the blade and the rear of the frame both feature

Then there’s the blade, itself. You can see both Ken Onion and Strider Knives in it. It has that Strider-influenced deep belly and serious hard-use look to it. The ZT301’s 4.25-inch blade is made from S30V steel, has a Tungsten DLC coating (with tiger stripes), and is SHARP. Real sharp. Now, I usually like combo serrations on a tactical/utility folder, but on this knife, I’m o.k. without them. I think if I have to cut through a seat belt or something, the ZT301 will get the job done fairly efficiently, anyway, especially with its recurve blade profile, which should help the edge to dig into whatever material you’re cutting and dragging the blade across.

So far, DefenseReview has only used the ZT301 as a concealed carry / urban utility blade (opening packages, boxes, etc.), so we haven’t really tested the knife for the hard-use tasks for which it was obviously designed and developed. We’re gun guys, after all, not backwoodsmen. However, we have no doubt it can handle significantly rougher use than that to which we’ve subjected it. This knife is serious business.

Anyway, now that that’s out of the way, on a recent trip to Washington state and Idaho to see my friend and business partner, I also had a chance to handle and examine the ZT Knives ZT400ST Black Tanto Serrated Assisted Folder. The ZT400ST is a bit lighter (5.3 oz) and thinner than the ZT301, and thus closer to my Blade-Tech/Wegner Pro Hunter Extreme. My business partner really likes the ZT400ST, and now, after having handled it, so do I. It’s a great knife, and at $150.00 USD suggested retail, it’s approx. half the price of the ZT301, which has a suggested retail price of $295.00 USD. The ZT400ST’s black blade is 3 5/8 inches long, and utilizes S30V steel and a Tungsten DLC coating, just like the ZT301. It also utilizes combo serrations on the rear of the blade, which Defense Review really appreciates. 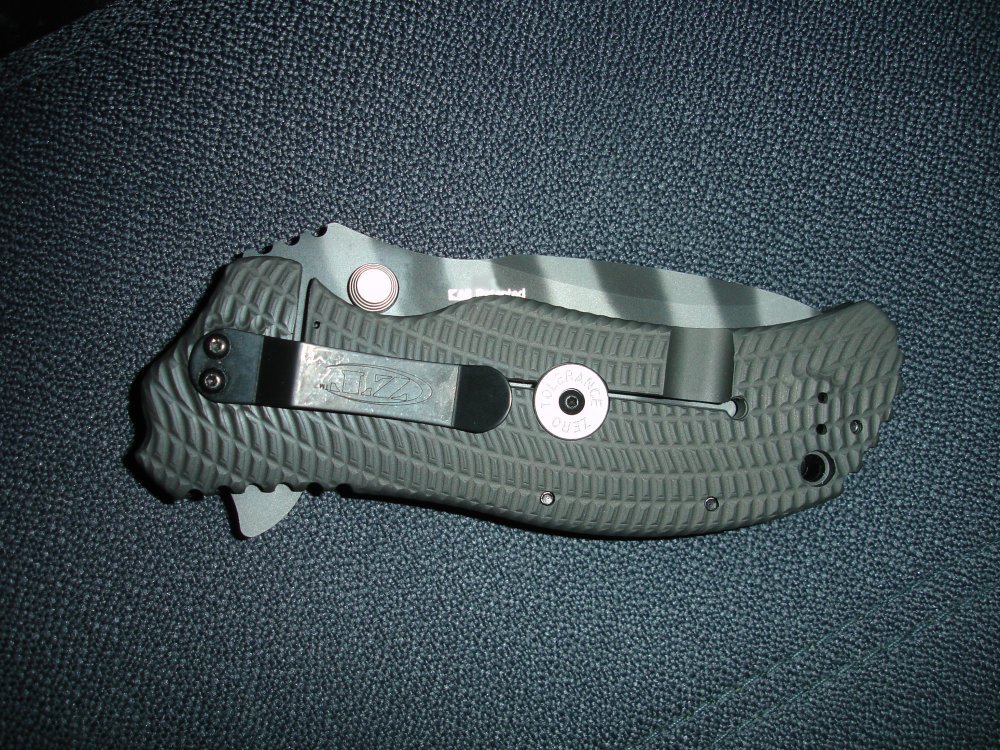 DefenseReview didn’t really get to spend a lot of time with the ZT400ST, but we really liked it, and were impressed with its quality.

Frankly, if you’re looking for a well-made, serious-use production clipit (pocket clip) tactical folder, you simply can’t go wrong with either the ZT301/302 or ZT400/400ST-series Zero Tolerance knives. Let’s put it this way, you could do a lot worse, and probably not any better. And, that’s pretty good.

David Crane started publishing online in 2001. Since that time, governments, military organizations, Special Operators (i.e. professional trigger pullers), agencies, and civilian tactical shooters the world over have come to depend on Defense Review as the authoritative source of news and information on "the latest and greatest" in the field of military defense and tactical technology and hardware, including tactical firearms, ammunition, equipment, gear, and training.
Previous Marvel Custom Tactical 1911 Pistols for Special Operations and Concealed Carry
Next New Ruger SR9 Pistol: Striker-Fired Tactical Plastic for Combat Applications